The changes are part of a major pay restructuring plan for the Phoenix police, which was approved by the mayor and city council in an 8-1 vote Wednesday. In all, the plan will cost the city $19.8 million next year. The planned police budget for the next fiscal year will be almost $850 million, a $63 million increase from this fiscal year.

Not exactly the defunding many of the department's critics have called for.

Not surprisingly, the raises sparked protests and hundreds of public comments, both supporting and opposing the move. On Tuesday, in advance of the decision, activists gathered outside Phoenix City Hall, protesting the plan and calling it a misuse of city funds. Public comment on the proposal there lasted more than an hour, and it often became emotional.

The city council, though, was unsympathetic. Councilmember Carlos Garcia was lone opponent of the proposal. Supporters on the city council argued that Phoenix police wages had fallen behind those of other cities, posing an urgent concern. 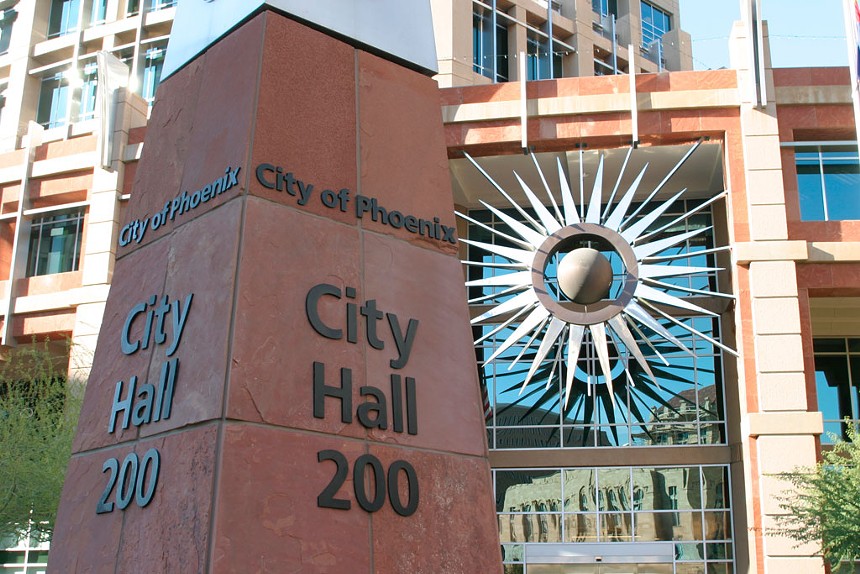 Phoenix City Hall
phoenix.gov
"Safety in the city of Phoenix is a priority. It is a priority to my constituents," said councilmember Ann O'Brien at the meeting. O'Brien, along with city staff, spearheaded the plan. Salaries for Phoenix officers, she said, were below average compared to other local departments, and raising them was the best way to address staffing shortages.

Others said that, regardless of their opinions on police funding, they believed the city was obliged to raise wages that have stagnated. "Cost of living is rising rapidly in the city of Phoenix," said Councilmember Yassamin Ansari. Current salaries for entry-level officers, she said, were "simply unlivable."

The Phoenix Police Department has seen attrition over the past two years, as it has struggled to recruit enough new cops to replace those who are leaving. At the moment, there are around 2,700 sworn officers on the force — down from about 3,000 in 2019.

The city is reconsidering the wages of city employees across departments, in a study that will wrap up at the beginning of 2023. Phoenix police, however, were given priority.

"I believe it's unfair to the other workers in the city that one department is prioritized again and again," Garcia said, calling it "shortsighted."

Pressed by Garcia on why the city had decided to offer the salary raises for police before finishing the study, Assistant City Manager Lori Bays said city staff had decided in November to expedite the process, due to the "severe shortage of police officers we're experiencing."

The city looked at the wages of officers in surrounding cities and towns, with the intention of making Phoenix cops the highest paid in the Valley. Now, they will be the highest-paid police force in the state of Arizona by 10 percent, according to the city's numbers.

"For decades the city of Phoenix Police Department was the go-to for a career in law enforcement. Academy classes would fill every seat in the classroom," O'Brien wrote in her statement touting the plan.

In recent years, this hasn't been the case, O'Brien said — partly due to the department's cost-cutting after the 2008 recession. She had spearheaded the city's plan to return the department to, in her mind, its former glory.

The plan takes effect August 8 and will raise the salaries of every sworn member by at least $16,000 — and in most cases by far more.
click to enlarge 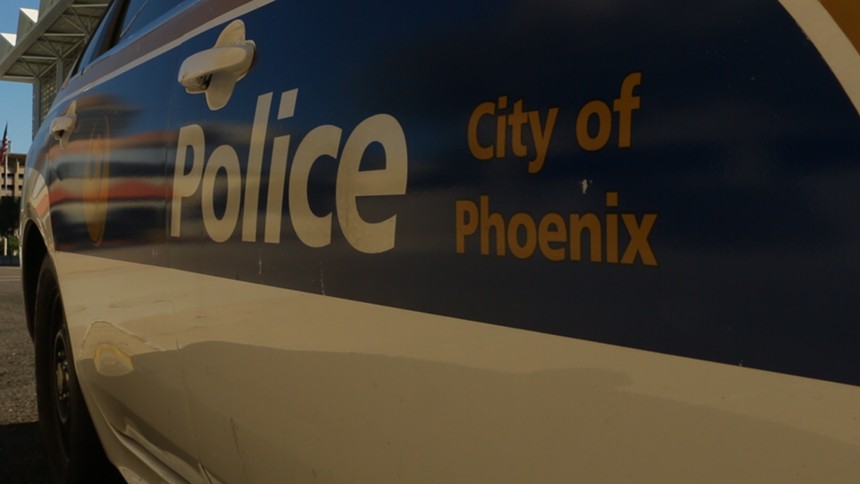 Of course, Phoenix is no longer as affordable as it used to be. Rents are skyrocketing, and the city has been hit harder than many places by inflation.

These increases are not quite as high as they seem. The city currently has a bonus program for officers based on performance and training that allows for additional compensation between $1,900 and $7,600 per year. Now, those bonuses will be eliminated and accounted for in the new salaries — though through overtime pay, night shifts, and remaining bonuses, many officers likely can make more than their base salary.

They also are not set in stone. This winter, the city's labor unions, including the police union, will begin negotiating new contracts. Typically, labor negotiations often result in salary increases.

Activists noted the irony of such large pay raises while the department is being investigated by the U.S. Department of Justice over civil rights concerns, and as the city contends with other crises, like the increasing number of people living on the streets.

Acton was standing in the same place, she reminded the crowd, where two years earlier, she protested against police brutality, and was targeted by Phoenix officers. Acton was one of more than a dozen protesters charged with criminal gang activity during the 2020 Black Lives Matter protests. The case was ultimately dropped.
click to enlarge 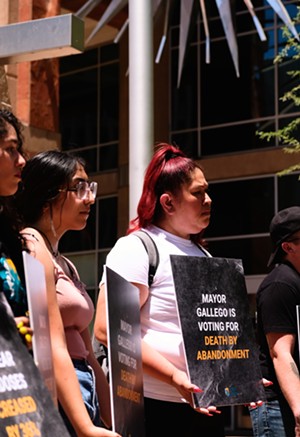 Anna Hernandez, the sister of a man shot by Phoenix police in 2019, spoke out in opposition to the pay hikes.
Katya Schwenk

The fallout from that scandal, though, is ongoing. Lawsuits brought by Acton and others remain unresolved. Just last week, the Maricopa County Attorney's Office moved to fire the main prosecutor on the case. The Justice Department has said that it is looking into the department's treatment of First Amendment activity as part of its investigation.

Furthermore, protesters emphasized, there are other realms that could use investment.

Hernandez and others emphasized the proposal had been done "sneakily, under the table." The pay increases were announced just a week before they came before city council.

Still, the proposal has many supporters as well — as evidenced by public comments made online and in person.

"I believe we need the best, brightest, and most well-trained police force to protect and serve the citizens of Phoenix," said another commenter, Debra McGrew. "That begins with being well paid."

The Phoenix Law Enforcement Association, the union for rank-and-file Phoenix officers, issued a statement on Facebook calling for people to voice their support of the pay bumps, saying it would be a solution to the department's current hiring woes.

Still, even with the pay hikes, the future of the Phoenix police department seems murky. The city, under the eyes of the Department of Justice, is searching for a new police chief to replace current chief Jeri Williams, who plans to retire this summer. It is contending with numerous legal battles over use of force and its treatment of protesters. The impact of this additional $20 million, so far, remains to be seen.
KEEP PHOENIX NEW TIMES FREE... Since we started Phoenix New Times, it has been defined as the free, independent voice of Phoenix, and we'd like to keep it that way. With local media under siege, it's more important than ever for us to rally support behind funding our local journalism. You can help by participating in our "I Support" program, allowing us to keep offering readers access to our incisive coverage of local news, food and culture with no paywalls.
Make a one-time donation today for as little as $1.