The Defiant Ones: New Times’ Founders Fire Back at Cindy McCain, U.S. Government Michael Lacey (left) and Jim Larkin hold up a California judge’s August 2017 order tossing out pimping charges against them. Stephen Lemons
With monitoring devices clapped to their ankles and the might of the federal government arrayed against them, veteran newspapermen Michael Lacey and Jim Larkin recently did something nearly all lawyers in the universe would advise their clients not to do: They talked to a journalist and took aim at their powerful enemies, who include the recently deceased Senator John McCain and his widow, Cindy.

In a widely read interview published August 21 in Reason magazine with associate editor Elizabeth Nolan Brown, the former owners of both Phoenix New Times and the online listings giant Backpage.com spoke for the first time since the FBI seized the Backpage.com website and shut it down in April as part of a 93-count indictment related to the facilitation of prostitution, conspiracy, and money-laundering.

Lacey, 70, and Larkin, 69, could spend the rest of their lives in prison if convicted. Still, the pair were at their pugnacious best in their discussion with Brown, arguing that the case against them is political payback for their years of speaking truth to powerbrokers.

“We weren’t trying to curry favor,” Larkin told Brown regarding New Times and the many other weekly newspapers they went on to own, including the Village Voice in New York. “We didn’t line up with the establishments in any city that we were involved in ... We didn’t really care what politicians saw in us. And that’s come back to haunt us.”

Over time Lacey’s and Larkin’s local enemies have included disgraced former Maricopa County Sheriff Joe Arpaio and former Phoenix police chief Ruben Ortega. But their most formidable foes may be the McCains.

Today John McCain is gone, having succumbed after more than a year of battling brain cancer. Lying in state in Phoenix and Washington, D.C., he’s been touted by liberal and conservative pontificators alike as the grand old warrior of the Republic.

Meanwhile, Cindy McCain has been mentioned as a possible replacement for her husband. Governor Doug Ducey must choose someone to serve in John McCain’s stead until the 2020 general election. 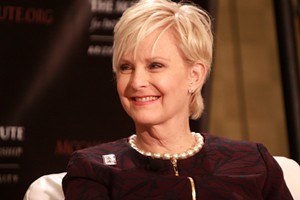 Cindy McCain and the founders of Phoenix New Times have a long history.
Gage Skidmore/Flickr.com

Politico doused the speculation of “Senator Cindy” with a massive tub of ice water in a recent article. However, the same item noted that the beer heiress will “wield immense influence over the selection” of the person who will fill her late husband’s seat.

Ducey has said that he will not be making any announcements on the pick till after McCain’s burial this Sunday.

“Part of the reason this [anti-Backpage campaign] has really worked is because you have Cindy and John McCain involved in this,” Larkin told Brown, “and they see an opportunity to even a score. We think there’s no question it’s partly their doing.”

There certainly was a score to settle. New Times wrote critically about John McCain from the beginning of his career in Arizona, first as a Congressman, then a Senator. In the late '80s, New Times columnist Tom Fitzpatrick skewered McCain as “the most reprehensible” participant in the Keating Five scandal, wherein McCain and four other Senators attempted to influence government regulators in favor of real-estate swindler Charles Keating – one of McCain’s most influential financial backers.

Over the years, New Times reporters unraveled the national press’ love affair with the senator and detailed the money John McCain took from donors with business before the Senate.

Since Cindy McCain’s fortune assisted in McCain’s rise to prominence, New Times investigated the source of that fortune – her father Jim Hensley, founder of the Budweiser distributorship Hensley & Co., who was a former bootlegger with ties to organized crime in the state.

Even more embarrassing for the McCains was the 1994 expose “Opiate for the Mrs.”. It revealed the truth behind Cindy McCain’s addiction to opiates, which she swiped in mass quantities from a charity she ran, the American Voluntary Medical Team. After a whistleblower reported Cindy McCain to the Drug Enforcement Administration, an investigation ensued that resulted in Cindy’s entering a diversion program without being charged. The McCains tried to spin the story as one of a brave, recovering addict coming forward to share her struggle with the public, but New Times had the whistleblower’s diary, and records revealing that the McCains’ attorney attempted retaliation against the man.

Cindy McCain later took up the cause of sex trafficking, and used it as a cudgel to attack Backpage, and by proxy, Lacey and Larkin. She now serves as co-chair of Governor Ducey’s Human Trafficking Council and has made human trafficking a focus of her husband’s signature non-profit, the McCain Institute for International Leadership, where she sits on the organization’s Human Trafficking Advisory Council, hosts forums on the topic, and supports research into the issue.

Cindy McCain has written op-eds, and testified before Congress about Backpage. She’s Tweeted out statements accusing Backpage of “hiding behind free speech” in order to “sell kids” for sex. And when Lacey and Larkin were subpoenaed to testify at a hearing on Backpage’s business practices before the U.S. Senate’s Permanent Subcommittee on Intelligence, Cindy McCain was in the audience as Lacey and Larkin and others were pilloried by various senators, including Cindy’s husband.

The feds employed the tactics of shock and awe when they arrested Lacey and Larkin in April, despite the fact that attorneys for both men had previously offered to have their clients turn themselves in.

FBI agents descended on Lacey’s Phoenix home en masse with guns drawn to take him into custody. Lacey told Brown that his mother-in-law was staying over at the time, and that an FBI agent held her at gunpoint till she stepped from the shower.

The feds popped Larkin after he arrived on a flight back to the U.S. from Scotland.

Both Cindy and John McCain Tweeted out their approval of the government’s actions. Though the senator was battling brain cancer, Cindy McCain spoke by video with the Arizona Republic to do her version of a victory lap.

“I’m sorry that it came to this,” she said. “We had tried to work with Backpage for many years. ... And we could never get through to them.”

Lacey and Larkin’s arrests came even though, thus far, federal and state courts have consistently ruled that the law is on Backpage’s side. Judges have cited both the First Amendment and Section 230 of the Communications Decency Act (which holds websites harmless for third-party content posted to the sites by others) in making rulings in Backpage’s favor.

In his conversation with Reason's Brown, Lacey called their case “the biggest free speech battle in America right now.”

One theme of the Reason article is the increasing conflation of sex trafficking and prostitution by advocates such as Cindy McCain, who, according to the Republic, called Lacey’s and Larkin’s arrests “a good day” in the fight against sex trafficking.

But prosecutors did not hit Lacey and Larkin with federal sex trafficking charges. They charged them instead under the Travel Act, alleging that they knowingly facilitated acts of prostitution across state lines through Backpage.

Crucially, neither Lacey nor Larkin is alleged to have had any involvement in actual transactions involving the sex trade. (Former California Attorney General Kamala Harris twice brought pimping charges against both men in state court, only to have two separate judges toss them.)

Rather, lawyers for the government contend that the adult advertisements that Backpage featured – in addition to ads for things like apartment rentals and yard sales – were obviously for illicit sex, and that Backpage worked to generate as much prostitution advertising as possible.

In her Reason article, Brown makes the case that the Backpage prosecution is part of a larger jihad the feds and various politicians are waging on the general sex trade, which includes the passage of the federal Fight Online Sex Trafficking Act (FOSTA), which essentially outlaws online sex ads.

Even though the feds have not used FOSTA against Backpage, the fallout from the new law has been swift. Craigslist shuttered its personals section. Reddit shut down several subreddits where prostitution was discussed. Big tech companies began amending their terms of service, and whole websites went dark rather than face legal consequences.

Sex workers say their lives have been made more dangerous because they can no longer vet clients, and many are having to work the streets instead of indoors, a potentially lethal situation.

Meanwhile, federal prosecutors haven’t waited for a jury verdict before moving against Lacey and Larkin.

The men were wealthy long before Backpage was conceived in 2004 as a way to compete with Craigslist, which by the early 2000s had siphoned off much of the revenue newspapers enjoyed from classified advertising. But the Reason article details how prosecutors have frozen their assets, placed liens on their property, and seized almost anything of value they or their spouses own.

Additionally, the feds want the duo’s attorneys disqualified because, they argue, the same lawyers once defended former Backpage CEO Carl Ferrer, to whom Lacey and Larkin sold the site in 2015 and who has already pleaded guilty to charges of money laundering and conspiracy to facilitate prostitution and agreed to testify against Lacey and Larkin.

Lacey and Larkin are fighting the asset seizures in court, but the trial is not until January 2020.

“They try to exhaust all your financial resources so that you can’t afford these lawyers,” Lacey told Brown. “[And] if the lawyers are still around, then they move to get rid of the lawyers.”

Nonetheless, Lacey and Larkin made clear to Brown that they have no intention of giving in.

“You know, there's this old, lame-ass horseshit that priests and nuns will tell you about 'God doesn't give you a burden that you can't carry,'" Lacey told the reporter.

"We will carry this burden, and we will fucking prevail at the end of this goddamn shit,” he vowed, adding, “but it's ugly in the middle."

Stephen Lemons is a former New Times columnist and staff writer. He is now an independent journalist who writes for numerous publications, including Front Page Confidential, a First Amendment website operated by Michael Lacey and Jim Larkin.