First Trump Put Razor Wire in Nogales. Then He Declared a National Emergency.

Long stretches of barrier that separate the small Arizona town from its Mexican sister city are completely covered with barbed wire. The display is visible from the city's quaint main street, where mom-and-pop shops were preparing recently for Valentine's Day. On the south side of the fence, where backyards hug up against the border, children's toys and clotheslines are obscured in view by the hazardous coils.

Garino, who also teaches at a K-8 Catholic school in the city, said he thinks of his students, “They’re going to grow up like we’re in the Middle East or something.”

U.S. troops installed the concertina wire just a couple of weeks before President Donald Trump declared a national emergency, a ploy to circumvent Congressional approval for $8 billion to build a wall-like structure on the southern border. 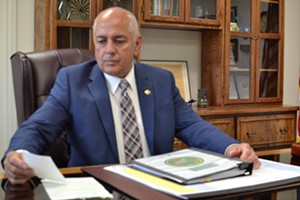 Mayor Arturo Garino
Steven Hsieh
It’s been an ongoing project. The first layer of wire was installed on top of the fence in November.

Garino — recognizing the resemblance between Nogales' fence and prototypes of Trump's wall — wonders whether the wire-fortified barrier was what the president has in mind for the rest of the border.

"Concertina wire is not a wall. A wall is a wall. Say he gets the billions he wants and builds the wall. Are they going to do the same thing in California and Texas and New Mexico?" the mayor said. "Does the wall work or not?"

When the new wire came, Garino pushed for the City Council to approve a resolution demanding the feds remove it. The resolution, citing the wire's potential to inflict “serious bodily injury or death,” passed unanimously.

Garino suddenly found his city of 20,000 in the center of national politics. The Washington Post covered the controversy. So did CNN.

Garino worked to get the message out to politicians higher than him. U.S. Representative Raul Grijalva, whose district includes Nogales, issued a statement condemning the wire as a "photo opportunity to reinforce the false narrative of rampant lawlessness at the border." Senator Kyrsten Sinema told Garino she would dispatch a representative to the city.

Garino had raised the issue with U.S. Senator Martha McSally a week before the latest addition, but his new messages to her went unanswered. Governor Doug Ducey's office also did not respond.

The extra attention brought the mayor death threats, he said. One caller wished for him to choke on his dinner. Another hoped that he’d be hanged for treason.

Last Wednesday, he met with the local chiefs for Border Patrol and Customs and Border Protection concerning the wire. They told him that the wire was their decision. When Garino asked why, one of the chiefs told him, “They had rapists, child molesters, and murders coming across.”

Garino couldn’t help but hear an echo of President Trump’s image of the border as a dangerous “crisis” zone where Mexicans are “bringing crime. They’re bringing drugs. They’re rapists.”

It’s an image that belies reality in Nogales, where the violent crime rate is lower than that of Phoenix, Tucson, and Mesa.

Border Patrol arrested a migrant who had just jumped over the border fence near Nogales on Tuesday, February 12.
Steven Hsieh
Border Patrol Agent B. Van Eseltine sees the latest barrier as an obstacle.

The wire could also slow someone attempting to scale the wall, Van Eseltine believes, giving border agents more time to respond. Concertina wire, after all, is explicitly designed to entangle its target.

According to Nogales resident Carlos Santa Cruz, a migrant got caught on the wire shortly after it was installed, causing him to lose a glove.
Steven Hsieh
On the afternoon of February 12, Phoenix New Times happened upon Van Eseltine and another agent arresting a migrant who had just hopped the fence minutes ago. A bag of the man's clothing rested at their feet. The migrant, wearing a T-shirt and jeans, apparently hadn't made it very far before the agents stopped him, handcuffed him, and drove him away.

He appeared to have cleared the wire unscathed, having jumped over a section of fence where the National Guard had only installed two coils of wire near the middle of the barrier, instead of five.

Data on the number of migrants arrested for jumping the fence in Nogales is hard to come by. Border Patrol did not respond to a request from New Times.

Residents give mixed estimates. Marcelino Varano, a Nogales city councilman and former mayor, told New Times he’s never seen a jumper. Edgar Zamora, who’s lived within feet of the fence for 35 years, says he’s lost count of the number of migrants he’s seen crossing over the barrier. (Mayor Garino says he requested figures from federal authorities after his meeting with them.)

In any case, Van Eseltine said, the wire “helps us do our job.”

He doesn’t think much of the politicians who’ve called it militarized or prison-like: “In my opinion, that’s just to score brownie points with voters." A view of Nogales, Sonora, beyond the concertina-wire enforced border fence.
Steven Hsieh
Residents of the sister cities see an insult, an overkill. Others accept the wire as a form of security. Some see pure political theater.

Jacksubeli Gonzalez, who lives on the Mexican side of the border, was puzzled when she first saw troops putting the wire up. “Why are they doing this?” she thought. And then she felt insulted.

Gonzalez, who works for the Border Youth Tennis Exchange (a nonprofit that fosters cross-border community through the sport) said she has long felt that the border fence needlessly divides what she and many others consider one community. Residents have long referred to the Arizona and Sonoran cities as Ambos Nogales, or “both Nogales,” one city in two countries.

Jacksubeli Gonzalez
Steven Hsieh
To Gonzalez, the aggressive display of wire felt like a direct affront to that concept. The placement of the wire on the Arizona side, Gonzalez said at the Southeast Arizona Area Health Education Center building in Nogales, Arizona, where the Border Youth Tennis Exchange is based, reinforces the stigma that Mexicans in particular are dangerous and need to be kept out.

“It is a huge lack of respect to our community,” she said in Spanish. “The message that installing that type of wire sends generates unnecessary alarm.”

Stella Perez, the CEO of Santa Cruz County Provisional Community College District, said she first saw the wire during a meeting at the Hilltop Art Gallery not far from City Hall. She wondered out loud about the "shiny" addition to the fence. A colleague said it was razor wire.

She felt like the wire served to remind the nation, falsely, that border towns have descended into a state of lawlessness so as to require military support.

"This the point of what the administration wants to make of Arizona. As a Mexican-American, I am deeply affected," she said.

Omar Sanchez, a 43-year-old resident of the Arizona side, first saw the wire during a ride with his cycling group. Sanchez, who works as a sales account manager for a fruit and vegetable distributor, thought about business. Mexico is a major supplier of produce to the United States, especially during the winter months, and most of those products pass through Nogales.

Carlos Santa Cruz, a 52-year-old landscaper who lives within feet of the fence, said he was startled by the troops installing the fence, which caused "commotion at night."

The first layer of wire didn't bother him. After all, Santa Cruz said, "It's good to protect the U.S." But the wire running to the ground? "This is too much."

Santa Cruz, a naturalized U.S. citizen who has lived in Nogales for most of his life, has seen climbers scale the wall from time to time. Most recently, he saw a jumper get stuck in the concertina wire. He pointed to a tangled bunch of the wire on the fence across from his property, a single glove dangling on a barb.

On the other side of town, a few blocks from the main cross-border checkpoint, 66-year-old Jose Gonzalez waited by his garbage bin near his property, which also hugged the border. The collector was late.

Gonzalez, who has lived in Nogales for 45 years, installed a gate on his property to keep migrants from running through, but it’s been a while since he’s seen anyone jump. He doesn’t believe the wire will keep people from crossing. They’ll find other ways to get through, Gonzalez says. Determined jumpers will just use wire-cutters.

But Gonzalez didn’t feel outraged over the new security measure, however hapless it might be.

He said in Spanish: “They already put it up. What can you do?"
KEEP PHOENIX NEW TIMES FREE... Since we started Phoenix New Times, it has been defined as the free, independent voice of Phoenix, and we'd like to keep it that way. With local media under siege, it's more important than ever for us to rally support behind funding our local journalism. You can help by participating in our "I Support" program, allowing us to keep offering readers access to our incisive coverage of local news, food and culture with no paywalls.
Make a one-time donation today for as little as $1.