Nationwide Immigrant Strike Planned May 1; Here’s What to Expect in Phoenix 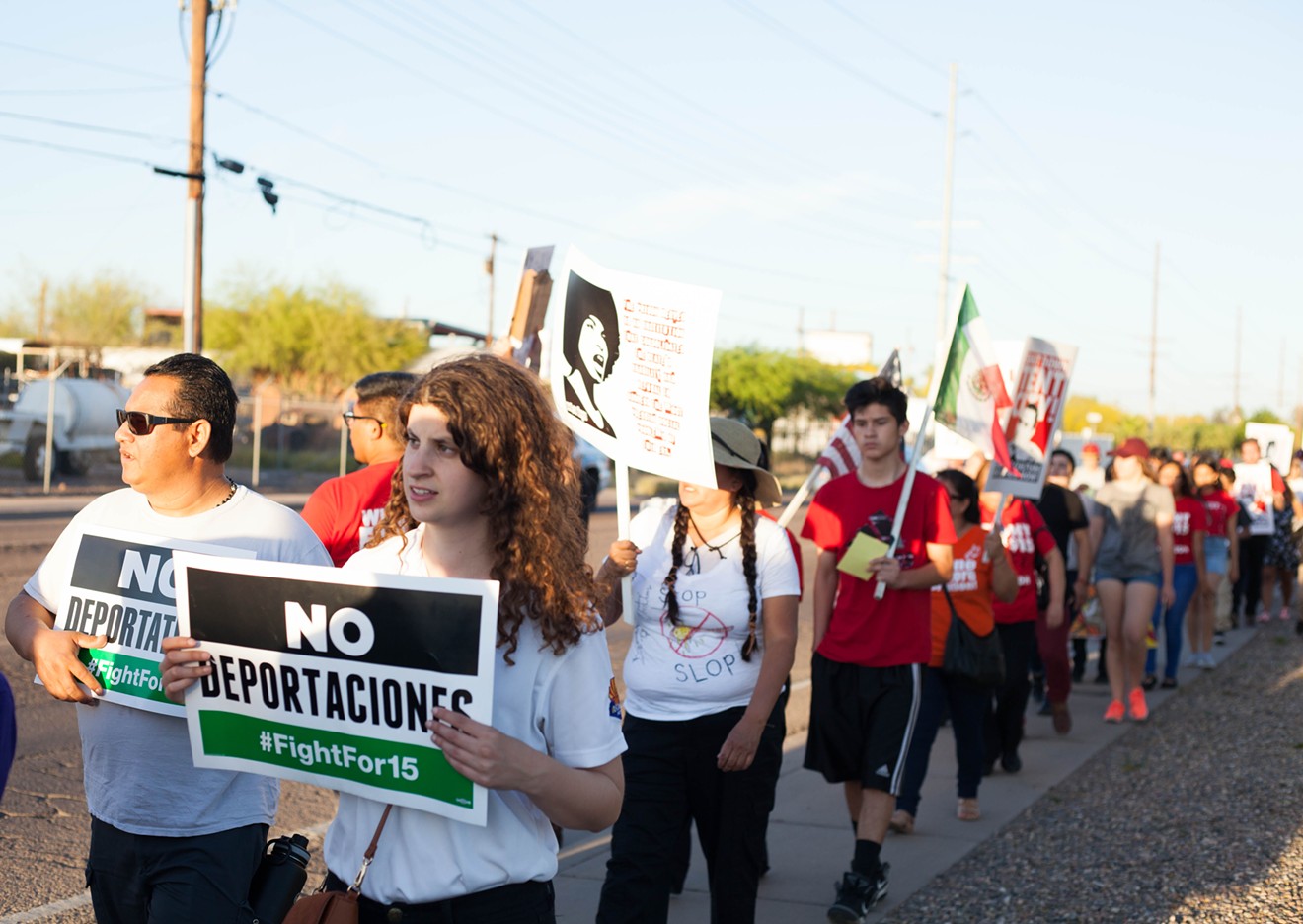 Protesters marched at Tent City recently, but don't expect big participation in Phoenix for the May Day immigrant strike. Maria Esquinca
On May 1, 2006, millions of people around the country skipped work for the day and took to the streets to protest legislation that would have made it a crime to help undocumented immigrants who were seeking food and shelter, and made it faster and easier to deport people believed to be in the country illegally.

The "May Day" protests — which took place on International Worker's Day in recognition of the fact that undocumented immigrants make up a large part of America's blue-collar workforce — ended up becoming one of the pivotal moments in the conversation over immigration reform.

Many of the participants went on to pressure President Obama to sign the DREAM Act. Others got involved with mobilizing Latinos with U.S. citizenship to vote.

Now, more than 10 years later, immigrants' rights groups and labor unions are planning for round two, in response to the Trump administration's numerous attacks on immigrants. This year's May Day protests are already being billed as the biggest immigrant strike since 2006.

Despite Phoenix's massive immigrant population, though, we probably won't see many people striking on May 1.

"We don't have the infrastructure to support people if they lose their jobs as a result of participating in a strike, so it would be irresponsible for us to ask them to do that," Maria Castro, a community organizer for Puente, explains.

Instead, activists from Puente, LUCHA, and Fight for $15 will be leading a protest at the Arizona Capitol, followed by a march to the Fourth Avenue jail. Castro says she expects roughly 500 people to show up.

"We're asking the folks who do make the decision to not go to work — which we completely support — to come and show up at the Capitol," she says.

If February's Day Without An Immigrant is any indication, not many people will end up calling out of work.

In Phoenix, the February strike was barely noticeable. A handful of restaurants closed, and some schools reported higher-than-average numbers of absences. The city didn't come grinding to a halt, as it undoubtedly would have if a critical mass of immigrants had chosen to stay home that day. Unless you'd planned to go Barrio Cafe for lunch, you probably didn't notice.

It's not hard to understand why immigrants were hesitant to join the strike. In the days that followed, reports of workers being fired for failing to show up that day emerged around the country. And people who are undocumented have every reason to not want to call attention to that status. Not to mention, many of them simply can't afford to take a day off work.

Also, Castro points out, the Day Without An Immigrant wasn't something that was coordinated by any specific group, and it didn't involve much advance planning. "The media just picked it up, and it ended up becoming a thing," she says.

This, obviously, created an awkward situation: Though people were largely aware that the strike was happening, they didn’t see or feel the effects, since not many immigrants actually took part. That made it possible to form the (incorrect) conclusion that immigrants don’t actually contribute that much to society.

May Day should be different, Castro says, even though there likely won't be a large-scale strike here in Phoenix. "This one is actually being orchestrated by multiple different organizations, so we're really excited to see what happens. This one's been planned for a while."