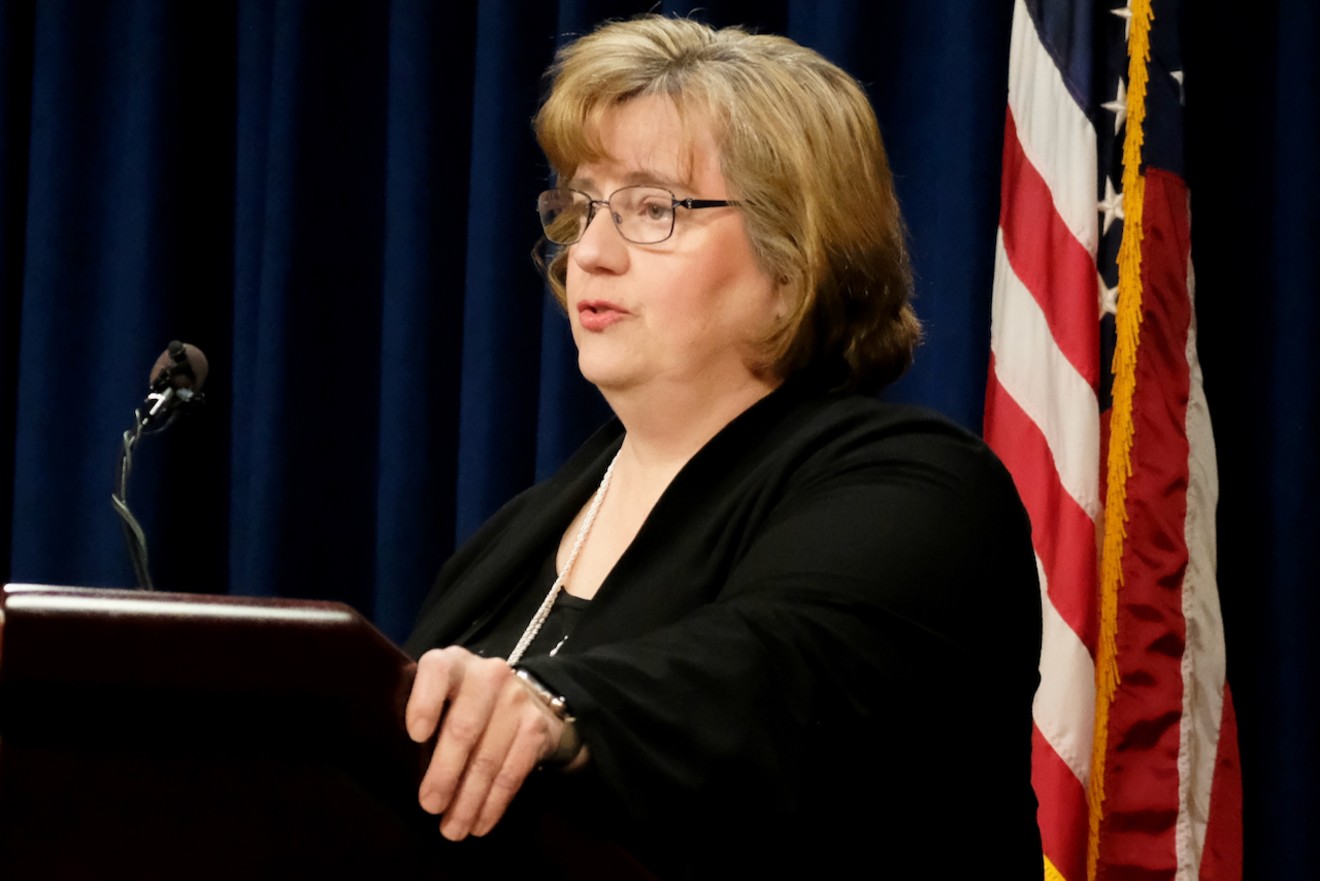 County Attorney Rachel Mitchell said January 24 that a state review of executions won't stop her office from seeking the death penalty. Katya Schwenk
Days after Arizona's new governor and attorney general put executions on hold in order to review the protocols around them, Maricopa County Attorney Rachel Mitchell said her office will continue to request the death penalty — and that she hopes the review is "expedient."

Mitchell said that she respected Governor Katie Hobbs's decision to pause executions and launch an independent review. But when pressed during a press conference on Tuesday, Mitchell would not say if she supported the step. "I also respect and took an oath to uphold the constitution and laws of the state of Arizona," she said.

On Friday, Hobbs issued an executive order on the death penalty in Arizona, starting a sweeping independent review of the state's executions — an opaque process that has a history of being botched. The move came about two weeks after Hobbs took office — and following three executions in the state in 2022.

Also on Friday, Attorney General Kris Mayes — who in January succeeded former Attorney General Mark Brnovich, an ardent supporter of the death penalty — announced that her office would not be pursuing an execution in the case of Aaron Gunches. He was sentenced to death in 2008.

Mayes's motion cited the fact that Gunches had reversed his initial request to be executed. It also noted that Hobbs' review process was now starting.

With Mayes declining to move forward on new death warrants, which set a date for executions, and Hobbs pursuing a review, executions are essentially on pause in the state.

Mitchell has been more conservative in seeking the death penalty than her predecessors. In the nine months since she took office, she has sought the death penalty for five people. Former county attorneys Andrew Thomas and Bill Montgomery each sought dozens more death sentences. Thomas sought 89 from 2005 to 2007, and Montgomery sought 41 between 2010 and 2012.

Still, Mitchell has no plans to stop her requests for executions. On Tuesday, Mitchell said she plans to ask Mayes to ensure that all those sentenced to death in Maricopa County who have exhausted their appeals be executed once the review is completed.

"Families of those murdered by those sentenced to death walk a long and painful path," Mitchell said, referring to the often decades-long legal process that follows any death sentence and drags victims' families through years of hearings and appeals. "That is why I hope the review process outlined in the governor's order will be both expedient and transparent."

Hobbs plans to appoint an "independent review commissioner" — a death penalty expert who has not worked for the Arizona Department of Corrections — to review the state's execution procedures, including "lethal injection drug and gas chamber chemical procurement process, execution protocols, and staffing considerations including training and experience," according to her executive order.

The review will result in a report to the governor with recommendations for improvement. No timeline for the review or completion of the report is given in the order. And Hobbs has hedged on questions about her personal stance on the death penalty — making it unclear whether the death penalty in Arizona will pick up where it left off after the review is complete.

Mitchell emphasized that the review will "not change the way the Maricopa County Attorney's Office does business." She said she spoke with Mayes and requested that the attorney general's office continue to prosecute death penalty cases, as it is tasked with doing.

"Attorney General Mayes assured me that if any changes were to be made that she would notify me of those," Mitchell said.

The attorney general's office will continue with legal proceedings surrounding appeals of death penalty convictions, according to Richie Taylor, the communications director for Mayes' office. "While AG Mayes will not seek death warrants during the review process, appellate litigation will continue for death row inmates that have not yet exhausted their appeals," he said.
KEEP PHOENIX NEW TIMES FREE... Since we started Phoenix New Times, it has been defined as the free, independent voice of Phoenix, and we'd like to keep it that way. With local media under siege, it's more important than ever for us to rally support behind funding our local journalism. You can help by participating in our "I Support" program, allowing us to keep offering readers access to our incisive coverage of local news, food and culture with no paywalls.
Make a one-time donation today for as little as $1.