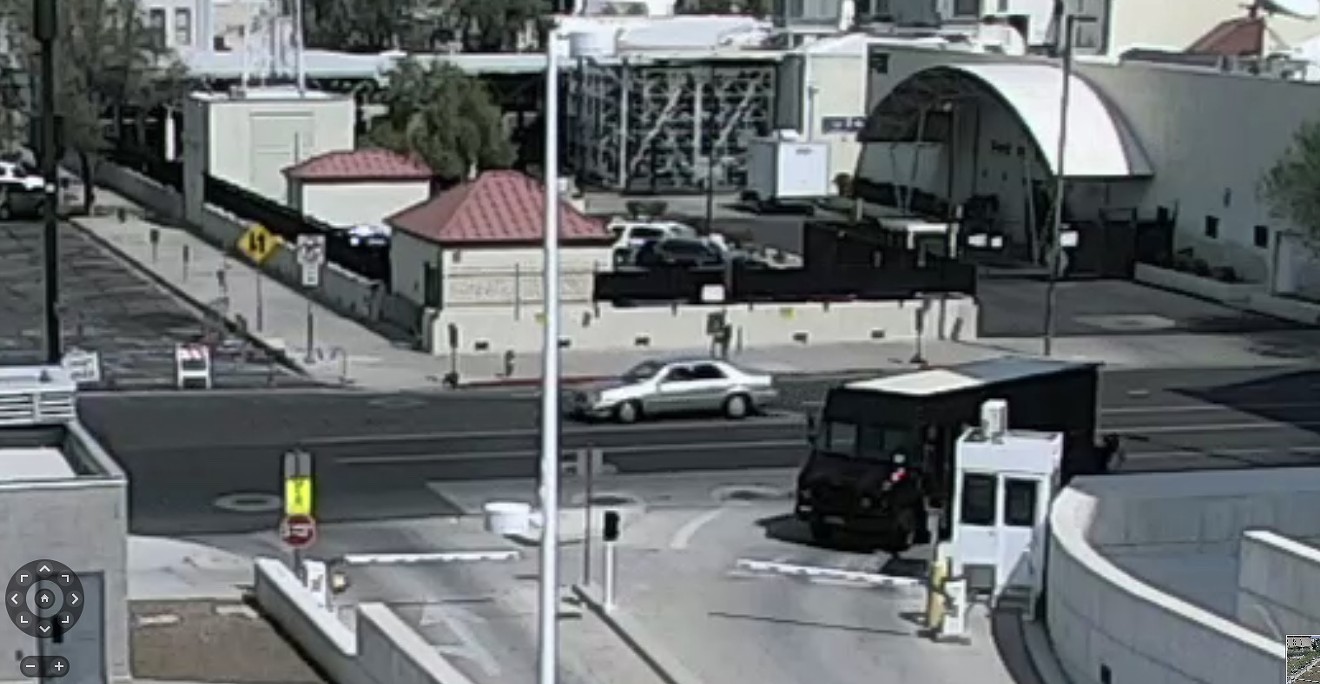 Phoenix police say this photo shows Carr's vehicle leaving the scene of the shooting. Phoenix Police Department
A suspect in Tuesday's drive-by shooting outside of the federal courthouse in downtown Phoenix, which put a security guard in the hospital, has been charged. Law enforcement, so far, have not mentioned any explicit political motivation for the attack in court documents.

The defendant, James Lee Carr, 68, has been charged with assaulting a federal officer with a dangerous or deadly weapon and knowingly discharging a firearm in relation to a crime of violence, according to a new complaint that was filed in federal court on September 15. Carr is in federal custody, per an FBI spokesperson.

The complaint details what allegedly transpired before, during, and after the shooting: The victim, a federal court house security officer, was conducting a security sweep of a UPS truck before allowing it to enter the court house when he heard someone say "hey." He looked up and saw a black male wearing a "full brimmed hat" driving a silver sedan, who then shot at him three times with a handgun. One of the rounds struck the officer in the right side of his chest area; the other two bullets hit the parked UPS truck. The officer fired eight shots in response as the shooter drove off.

On the same day, James called his brother, Lonnie Carr, and told him that he shot the security guard. Lonnie then contacted James' ex-wife and son, telling them that James indicated that "he wanted to die because he shot a security guard" and that he was sitting at Verde Park. James' ex-wife and son drove to the park and found him sitting next to a rifle and a pistol while wearing a full suit, dress shoes, and fedora.

As they approached James, he said, "Tell people not to fuck with me." His ex-wife was able to secure the guns in the car, while James told his son that he "snapped" and shot the security guard because he was "harassing him." James' son indicated to investigators that his father had mental health issues and it was unusual that he was wearing a full suit.

Law enforcement eventually took James into custody at the park.

Interviews by investigators of James' neighbors shed additional light on James' actions. One neighbor and longtime friend of James, Barry Morris, said that he visited James' apartment at 10:00 a.m. on September 15, where James was very angry and agitated. James kept saying, "I'm going home today," Morris told authorities, which Morris thought meant that he was going to kill himself. James went inside his apartment and emerged dressed in a suit and holding a rifle and a revolver before driving off in his silver Cadillac.

Another neighbor, Jerrie Olds, told investigators that James is an alcoholic who smokes marijuana and has mental health issues.

When news of the shooting originally broke on September 15, Phoenix City Councilmember Sal DiCiccio took to social media and claimed, without evidence, that the shooter was tied to Black Lives Matter and anti-fascist activism.

"Make no mistake, this is a direct result of the extremist anti-police attacks we have seen from BLM and Antifa across the country. This insanity needs to stop," he said in a tweet.

The next day, DiCiccio made a similar assertion, writing, "I have a source who has contacted me & stated that the shooter from yesterday's incident at the federal court house in downtown PHX was a declared BLM supporter who deliberately set out to kill a police officer - an attempted copycat of the deadly ambush on LA Sheriff's deputies."

But the complaint filed against James does not assert that he was a "declared" supporter of Black Lives Matter or Antifa, or that he attempted a "copycat" of the shooting of two sheriff's deputies in Los Angeles that occurred last weekend.

New Times attempted to contact DiCiccio for comment on his statements, but was told by a staffer that he was in a council meeting.

Sam Stone, DiCiccio's chief of staff, said that he hadn't seen the complaint yet and would have to review it. When New Times summarized the contents of the complaint and James' alleged reasoning for shooting the security guard, Stone said, "It seems pretty unlikely that a security guard was harassing someone who was driving down the street while they were trying to check the ups truck for bombs."

When asked whether he thought it was misleading or irresponsible for DiCiccio to claim that the shooter was connected with Black Lives Matter or Antifa before all the facts were known about the shooting, Stone responded, "Despite many, many liberal claims otherwise, every time someone gets arrested at one of these things, someone is always tied to them [BLM or Antifa]."

He eventually hung up.

According to a neighbor of Carr's interviewed by Nicole Grigg of ABC15 News, Carr had been recently told he had to move from his apartment, which no longer accepted Section 8 housing.

Read the full complaint below: