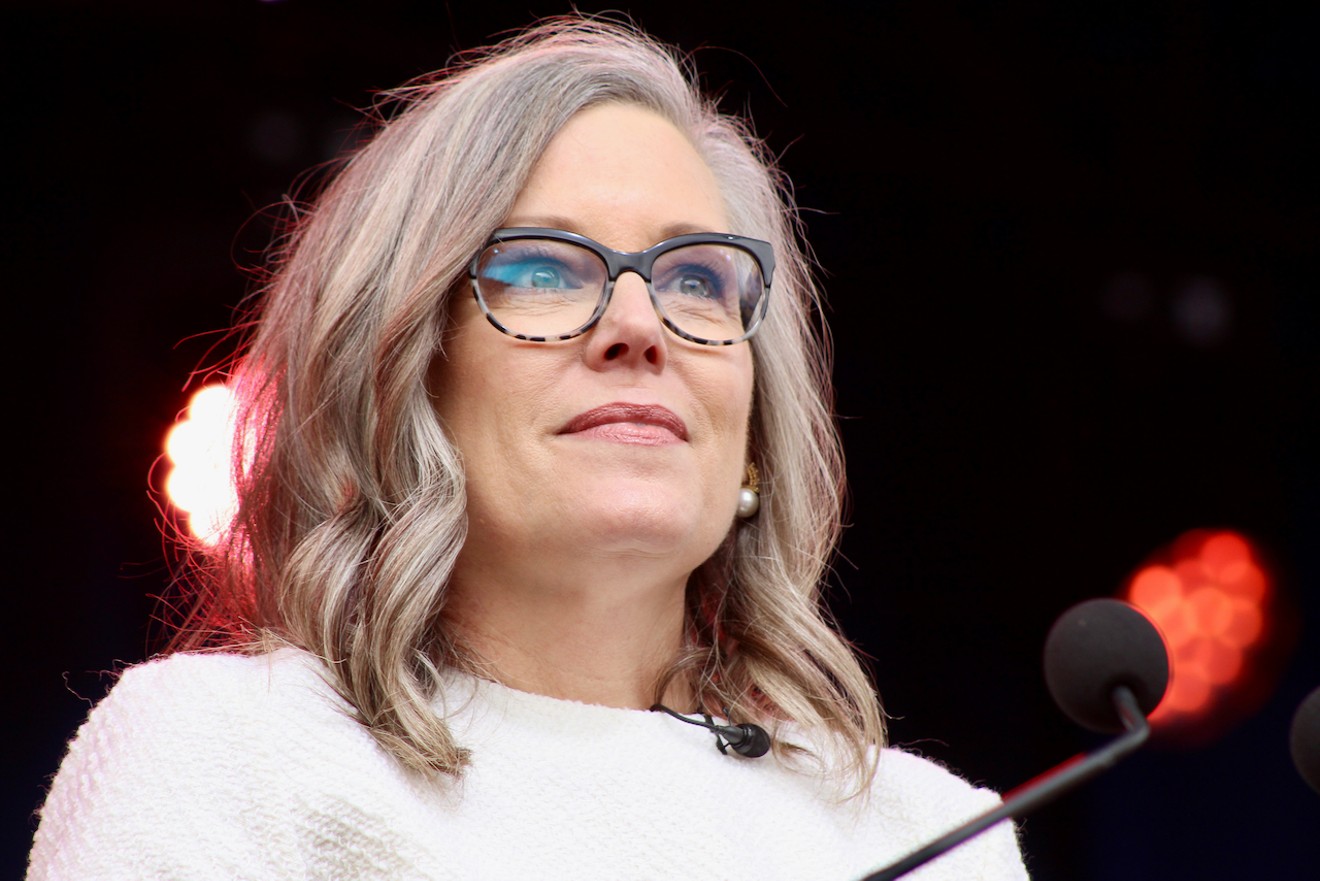 Governor Katies Hobbs and other statewide elected officials took office on January 2 in a private ceremony and then again three days later in a public event. Elias Weiss
Arizona Governor Katie Hobbs and other statewide officials were inaugurated quietly in a private event on the ninth floor of the Capitol Executive Tower on January 2, a federal holiday. Hobbs refused to let the public and reporters attend.

Three days later, the elected officials took the oath of office again — this time in a public ceremony held outdoors on the grounds of the Arizona Capitol with the help of corporate sponsors and even a little prison labor. Hobbs, who promised to run “the most ethical and accountable” administration in history, refused to disclose how much the inauguration cost or where the money came from.

She also asked donors to cough up $250,000 each to cover “costs associated with the swearing-in ceremony.”

Hobbs also threw herself a ceremonial ball on January 7, something no new governor has done since Governor Fife Symington had one 32 years ago. And every governor since Symington has released the cost of their inauguration ceremony, except Hobbs, who has touted that “the people deserve to know what their leaders are doing with their money.”

Symington and two other former Republican governors — Doug Ducey and Jan Brewer — sat in the front row during the inauguration on January 5. They were alongside Cindy McCain and newly Independent U.S. Senator Kyrsten Sinema. Senator Mark Kelly did not attend.

According to a spokesperson, there were 4,000 tickets for the event and there was a waitlist, although many of the white plastic folding chairs sat empty with miniature state flags in them.

When Hobbs, the first Democrat to hold the office since 2009, took the stage, she was greeted with chants of “Katie! Katie! Katie!” Just outside the Capitol Mall, a smattering of protestors held up signs reading “Hobbs for prison” and shouted “Katie Hobbs, you fucking suck!”

Hobbs was joined onstage by Secretary of State Adrian Fontes and Attorney General Kris Mayes, both Democrats, as well as Treasurer Kimberly Yee and Superintendent of Public Instruction Tom Horne, both Republicans. Hobbs’ inaugural committee didn’t invite Republican Mine Inspector Paul Marsh, who took his oath of office in the private ceremony on January 2.

Three hours after the ceremony was over, Hobbs fired off an email to her supporters again asking for more money to “congratulate Katie on her inaugural celebration day.”

An Arizona Department of Corrections spokesperson declined to answer questions from Phoenix New Times about how many incarcerated people worked to set up the ceremony, how long they worked, or if they were compensated. 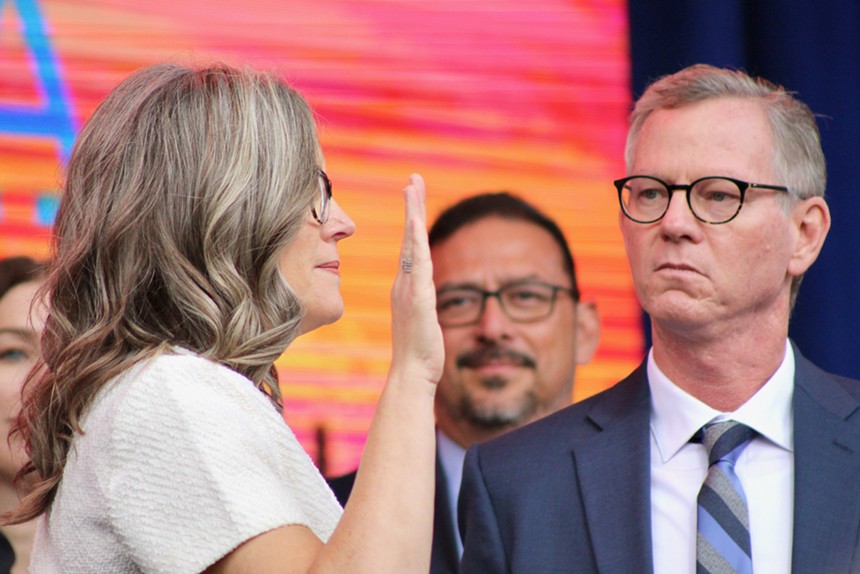 Hobbs Doubles Down on Campaign Promises

Hobbs is Arizona’s fifth female chief executive, which outpaces any other state. But she's only the second woman to take the job by first being elected to the office.

“Today represents a new chapter in the story of our beloved state," Hobbs said.

In her inaugural address, she painted herself as a bipartisan native Arizonan social worker-turned-politician just like she did along the campaign trail. Hobbs emphasized public education, water and housing crises, and reproductive rights. She promised to reach across the aisle and always put country over party.

“I never back down from a tough fight. I never back down when things get tough,” Hobbs said. Yet in December, the governor-elect ran away from New Times reporters following a conference at which she was a panelist. It’s a habit of hers.

During her inaugural speech, Hobbs also jabbed at her GOP opponent in the gubernatorial race, political newcomer Kari Lake, and Lake's penchant for concocting and spewing unfounded conspiracies.

“Chasing conspiracy theories, pushing agendas for special interests, attacking the rights of your fellow Arizonans, or seeking to further undermine our democracy will lead nowhere,” Hobbs said to a standing ovation. 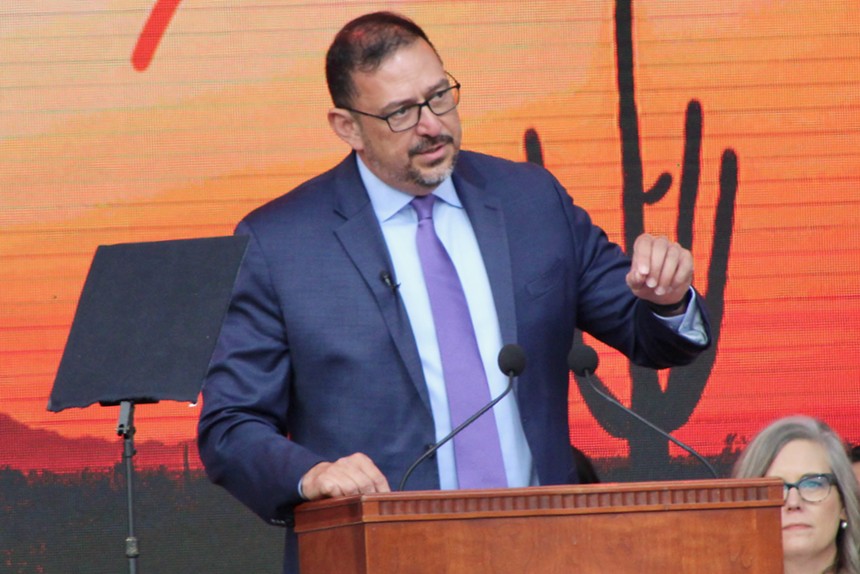 Fontes, once the Maricopa County Recorder, said that election officials like himself are fulfilling their duties “under the disgraceful and anti-American circumstances involving harassment and threats to their lives.”

He obliquely likened Finchem and others like him to terrorists.

“This domestic terrorism must be prosecuted to the fullest extent of the law,” Fontes said.

He suggested election officials should be further compensated for dealing with election conspiracy theories and threats to their safety. He also promised to work with Mayes to prosecute people who intimidate and threaten voters and officials. 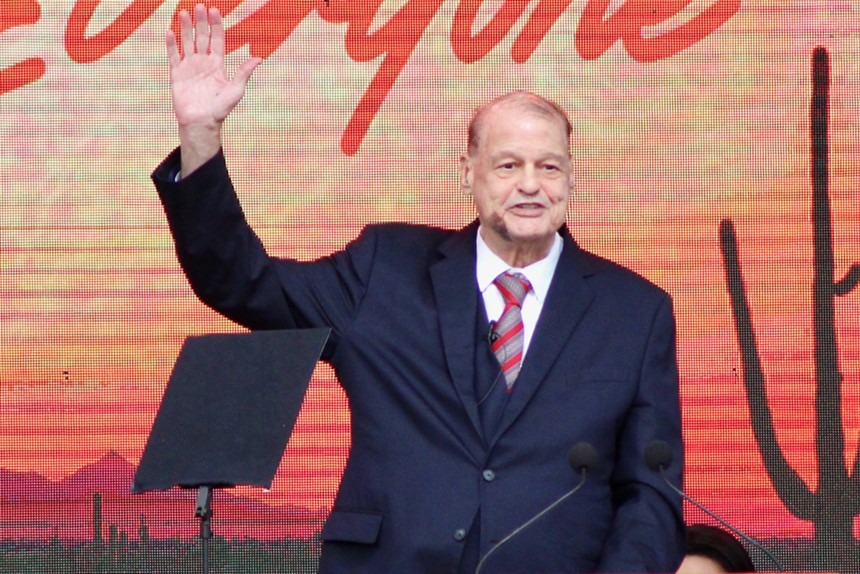 Horne has been called the worst politician in Arizona — ever. The 77-year-old Republican’s protracted career as state superintendent and attorney general is riddled with sex scandals, racism, and crime.

But Horne won his old post by the narrowest of margins — less than half of a percentage point — and ousted Kathy Hoffman, the Democratic incumbent. Hoffman was the recipient of widespread conservative disgust over her response to the coronavirus pandemic.

Unlike the other elected officials who were sworn in on January 5, Horne received just a pattering of applause. Many people in the crowd remained seated as he placed his left hand on a Bible and raised his right hand.

Horne promised to place more focus on schools with lower test scores, recruit more passionate and specialized teachers, and give more freedom to teachers to develop their own curriculums.

Horne also indicated his plan to “return to traditional discipline in our schools.” He said that students who “misbehave” deserve more severe punishments, adding that “the situation is out of hand” and is to blame for affecting the state’s teacher shortage.

Horne said he will launch a “discipline initiative” to hold schools accountable if children aren't punished. 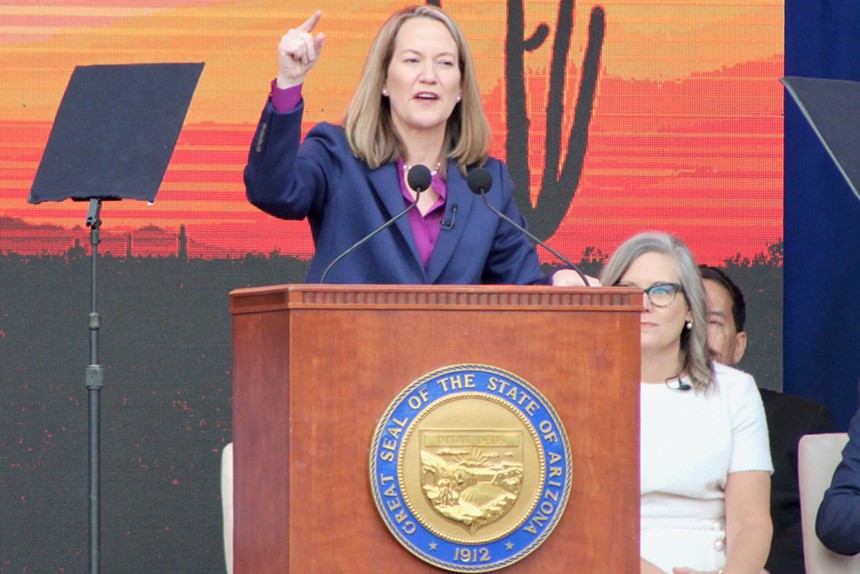 “The future of democracy ran through our state, and as I said, Arizona came through for the country," Mayes said in her address.

She extended gratitude to all voters, “especially the 280 of you who clinched my victory,” she quipped. A recount confirmed Mayes eked out a razor-thin victory over election fraudster Abe Hamadeh, who keeps suing to try and overturn the election.

Mayes said she plans to take up the bipartisan mantle for the late Senator John McCain and former Republican Attorney General Grant Woods. “May we strive to work together for the greater good,” Mayes said. “Country over party.”

Mayes is Arizona's first LGBTQ Attorney General and just one of three out Attorneys General currently in office in the U.S., according to the Victory Fund. 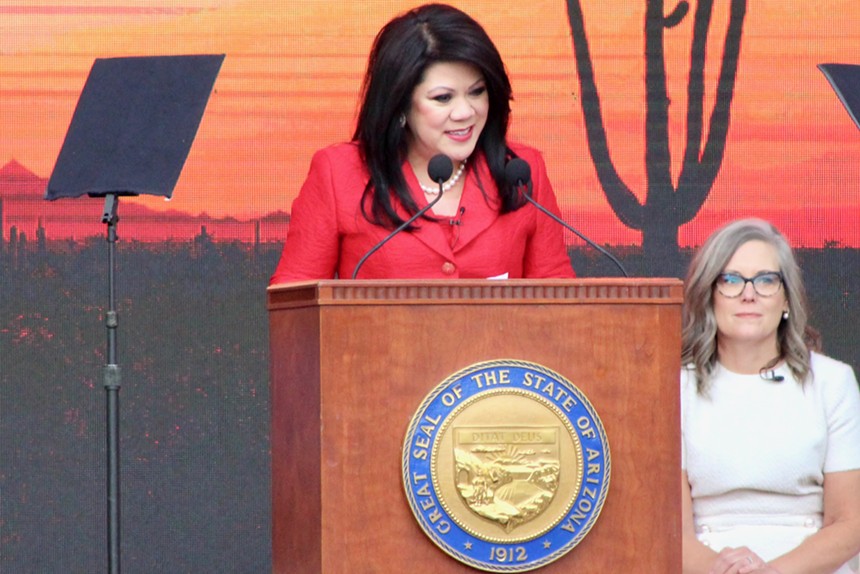 
Yee was the only incumbent to take office on January 5. She has served as Arizona’s treasurer since she was first elected in 2018 and beat State Senator Martín Quezada to win her second bid. Yee is the first Chinese-American Republican woman to hold statewide office anywhere in the U.S.

Her grandparents immigrated to Phoenix from China in the 1930s and opened the New State Market grocery store at Seventh Avenue and Buckeye Road. Her inaugural address was largely about the American dream.

“As I begin my second term, I look back at the accomplishments of my administration and look forward to the work ahead,” Yee said. “It is my hope that we as trusted officials of this state will lead the people of Arizona with respect, civil discourse, honesty, and integrity.”

Yee was the only elected official to thank God for her win.
KEEP PHOENIX NEW TIMES FREE... Since we started Phoenix New Times, it has been defined as the free, independent voice of Phoenix, and we'd like to keep it that way. With local media under siege, it's more important than ever for us to rally support behind funding our local journalism. You can help by participating in our "I Support" program, allowing us to keep offering readers access to our incisive coverage of local news, food and culture with no paywalls.
Make a one-time donation today for as little as $1.
Elias Weiss is a staff writer at the Phoenix New Times. A native of Charlotte, North Carolina, he reported first for the Northwest Arkansas Democrat-Gazette and was editor of the Chatham Star-Tribune in Southern Virginia, where he covered politics and law. In 2020, the Virginia Press Association awarded him first place in the categories of Government Writing and Breaking News Writing for non-daily newspapers statewide.
Contact: Elias Weiss
Follow:
Twitter: @ecweiss