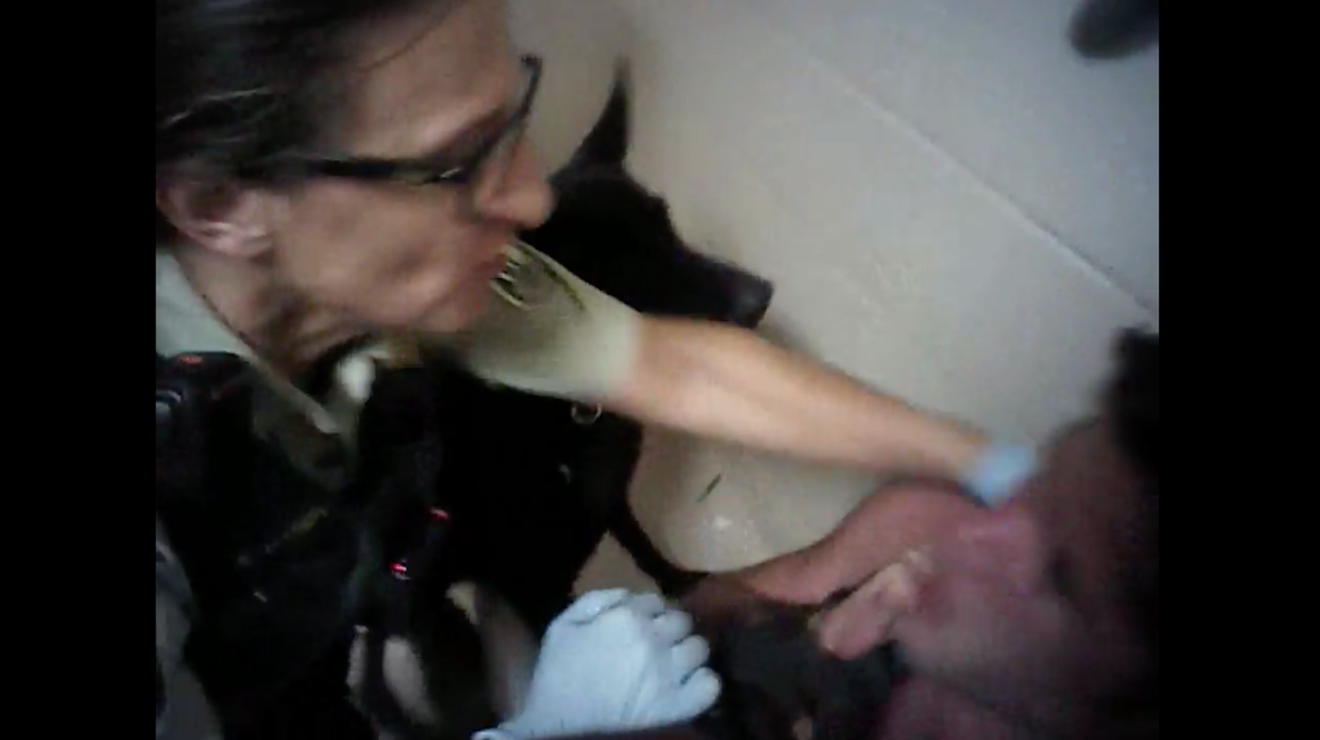 By the end of that day, a Maricopa County deputy would wind up with a broken leg, and McGough would get bitten viciously in a jail cell by a canine officer named Sergeant Shadow.

McGough, 27, claims in a federal civil rights lawsuit filed this year that two Maricopa County Sheriff's deputies tortured him by allowing Shadow to bite him for more than three minutes. During the canine attack, which was captured on three body cameras, McGough was cuffed and pinned to the ground in a holding cell of the sheriff's office's Blue Point Substation.

"When you’re subjecting someone to lengthy and continuous pain and maiming, torture is an appropriate word," said Steven Guy, the attorney representing McGough.

McGough's lawsuit also names the United States as a defendant, claiming that a U.S. Forest Service officer assaulted him by grabbing his throat twice.

Meanwhile, the deputy who broke his leg in the incident, David Crissinger, is suing McGough.

Phoenix New Times learned of McGough's case during a review of recent lawsuits against the Maricopa County sheriff's office, an agency that paid out millions for lawsuits — often for jail brutality cases — under former Sheriff Joe Arpaio. New Times then contacted McGough's Scottsdale attorney, Guy, who released body cam videos he obtained from the county. 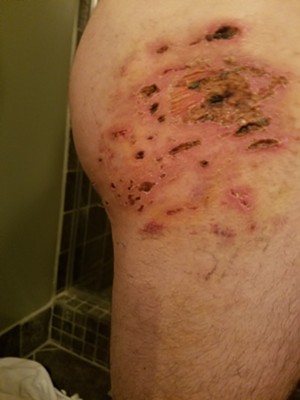 The bite wounds on McGough's upper thigh. This picture was taken days after the canine attack.
Courtesy of Shane McGough
In notices of claims filed before his lawsuit, McGough asked for $4 million from the sheriff's office and $2 million from the Forest Service as compensation for his physical injuries and emotional distress, as well as punitive damages and attorneys' fees. Shadow's biting caused deep puncture wounds on McGough's upper thigh that have left permanent scars.

"While Arpaio is no longer in control of MCSO, the facts of this case prove that his legacy continues and Sheriff Paul Penzone has not yet done enough to reverse Arpaio’s long ingrained culture," states a November 13, 2017, notice of claim to the county.

The U.S. Forest Service did not respond to requests for comment by deadline.

A trial date has not yet been set.

It all began on July 15, 2017, when McGough and three friends returned to a parking lot after a morning of tubing on a well-used stretch of the Salt River on the Tonto National Forest. McGough's group got into an argument with an Uber driver, who claimed that the truck McGough and his friends were riding in had hit his car.

Two Maricopa County deputies, Michael Finney and Crissinger, responded to the scene in a golf cart. At the time, they were working as private security guards for a tubing rental company. While Crissinger questioned the driver, Finney conducted a search of the truck, which belonged to one of McGough's friends.

Sometime during this process, McGough yelled at Finney, claiming that the search was unlawful. He attempted to block the deputy from further searching the vehicle, a police report states. Police spotted a handgun in the car.

According to McGough's complaint, Finney "forcefully grabbed" McGough's throat and restricted his airflow.

The MCSO tells a slightly different story. In a formal response to McGough's lawsuit, which was filed August 13 in federal court, the department said Finney grabbed McGough to keep him away from the handgun.

Both parties in the suit agree that after Finney made contact with McGough, the 27-year-old responded by striking Finney with a closed fist. Both parties also agree that Deputy Crissinger tackled McGough, and that during that takedown, Crissinger twisted and fractured his leg.

Speaking on the phone this week, McGough said he regrets becoming aggressive with the deputies. "I could’ve not reacted as harshly. I could’ve dialed it back a little bit," he said.

After deputies cuffed McGough, Forest Service Officer Kelly Fleming drove him to a substation near the parking lot. The three body camera videos released by McGough's lawyer show what happened next.

(Along with the edited footage of body camera videos from Alden Jackson and Kelly Fleming at the top of this page, longer footage taken from the body cameras of Jackson and Fleming can be found at the bottom.)

In the videos, Maricopa County deputies Alden Jamaal Jackson and Shaun Eversole, along with Fleming, escort McGough out of the vehicle and toward the substation. Canine officer Shadow, kept on a leash by Eversole, accompanies the group.

As they walk, Eversole tells McGough, "If you make any aggressive movements, you're going to get bit."

Sitting on a concrete bench inside a cell, McGough repeatedly demands an explanation for his arrest. As Jackson struggles to unlock his handcuffs, McGough attempts to stand up. Jackson pushes him back onto the bench. Eversole gives Shadow the command to bite McGough, but the dog does not comply.

Moments later Forest Service Officer Fleming grabs McGough's throat with two hands as she tells him to "calm down." McGough kicks in Fleming's direction while saying, "Bitch, fuck you." Police reports state that McGough's kick made contact with Fleming, but McGough's attorney disputes that assertion.

At this point Jackson yanks McGough from the bench and brings him to the ground. A few seconds later, Eversole commands Shadow to bite McGough, beginning a prolonged canine attack that caused deep puncture wounds in McGough's buttock and upper thigh.

As the officers attempt to remove McGough's handcuffs, Shadow repeatedly bites McGough on his backside. Jackson has his knee pinned McGough's abdomen for much of Shadow's attack. McGough alternates between screams of pain and pleas for the officers to call the dog off. Jackson successfully removes the left cuff from McGough at about the 90-second mark of Shadow's attack.

Jackson orders McGough to place his hands on his head as Shadow continues to bite him. McGough repeatedly squirms and says, "Yes sir," "I will comply," and "please stop the dog." He continues to scream in agony and says, "It really fucking hurts."

Roughly three minutes into the canine attack, Shadow stops biting on Eversole's order and McGough stops screaming. The sheriff's office has stated in legal documents that the length of Shadow's bite matched the time it took for officers to have "full control" over McGough.

Although he suffered numerous injuries as a collegiate and high school wrestler, McGough said that he "has never felt pain" like what he experienced during the canine attack.

"Every time the dog moved and tugged in harder, you could feel his teeth sink in. It felt like it was going to the bone."

McGough claims it took more than an hour for for emergency medical technicians to arrive and take him to Mesa Banner Hospital, where he was treated for his wounds. He was later booked into Maricopa County Jail in downtown Phoenix.

McGough filed his notices of claim in November 2017 before pleading guilty the next month to a reduced charge of aggravated assault for the scuffle and Crissinger's injuries. Prosecutors dropped the other charges against him. He served six months in Durango and Towers jails for the conviction and was released on July 21. While he was in jail, Guy filed the lawsuit.

The sheriff's office opened internal investigations of the deputies involved in the holding cell incident after McGough filed his notice of claim.

The department's canine policy does not provide detailed guidance on the use of dogs to control handcuffed detainees who are still being processed.

According to the policy, uses of canine officers in a jail setting include "acting as a deterrent to behavior or actions detrimental to jail facility security," "controlling inmates and suppressing jail facility disturbances," and "assisting with inter- and intra-jail inmate movement," among other uses.

Besides the government agencies, McGough's lawsuit accuses Sheriff Paul Penzone, Eversole, Jackson, and Fleming of violating his due process and privacy rights.

Crissinger, the deputy who broke his leg in the incident, isn't named as a defendant in McGough's complaint. But in June, Crissinger filed his own lawsuit in Maricopa County Superior Court against McGough.

McGough said he hopes his lawsuit leads to changes in how Maricopa County cops treat people in custody. "What happened to me should never happen," he said.

Although his wounds have mostly healed, doctors told McGough that he will have permanent scarring from the canine attack. McGough said the area where he was bit is numb to the touch.

He also bears emotional scars. McGough recently started seeing a therapist for symptoms related to the holding cell incident, he said. The sight of police or dogs, including his own, have become triggers.

"I get clammy, blocked up, and I can’t think and I start panicking in my head. It brings me back to what happened," McGough said of his reaction to seeing dogs. "The same happens with law enforcement when I encounter them. I kind of just shut down sometimes."

Joel Robbins, an attorney who has been practicing civil rights law in Maricopa County for more than 25 years, and who has filed dozens of lawsuits against the MCSO, told Phoenix New Times that he has never come across a case where sheriff's deputies used a canine on a someone in handcuffs.

"I've never heard of them bringing a dog into a holding cell," Robbins said. "It just doesn’t make sense."

KEEP PHOENIX NEW TIMES FREE... Since we started Phoenix New Times, it has been defined as the free, independent voice of Phoenix, and we'd like to keep it that way. With local media under siege, it's more important than ever for us to rally support behind funding our local journalism. You can help by participating in our "I Support" program, allowing us to keep offering readers access to our incisive coverage of local news, food and culture with no paywalls.
Make a one-time donation today for as little as $1.
Steven Hsieh was a staff writer for Phoenix New Times from August 2018 to April 2020.
Contact: Steven Hsieh
Follow:
Twitter: @stevenjhsieh