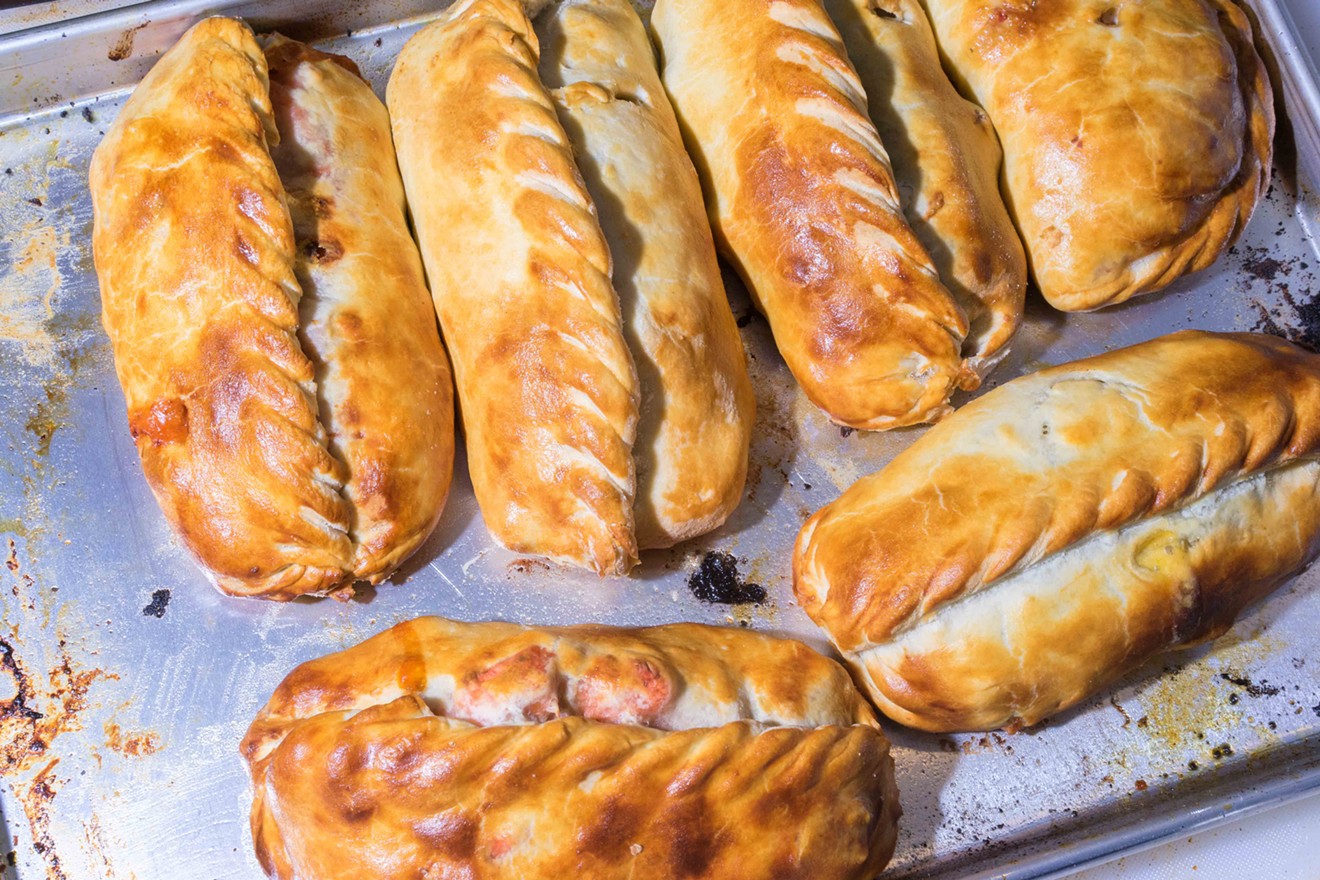 Pasties from the Cornish Pasty Company in downtown Phoenix, fresh from the oven. Shelby Moore
Even if the only thing you really want to savor in Phoenix is the sweet taste of victory, you’ll still need somewhere to eat during Final Four weekend. And, depending on how your team does, you might need somewhere to drink, too.

Final Four fan activities like Fan Fest and the March Madness Music Festival will be centered around downtown Phoenix, while the games will be played on the west side at the University of Phoenix Stadium in Glendale. No matter where you find yourself in the Valley, though, consider this your cheat sheet to where to eat and drink.

This beloved Phoenix micro-chain has several locations in metro Phoenix, including a new three-story downtown location that’s about a five-minute walk from the Phoenix Convention Center and convenient to the Valley Metro Light Rail. The specialty here, of course, is the pasty – a traditional Cornish hand pie filled with all manner of savory and sweet ingredients. There seems to be a pasty on the menu for every mood and preference, from ultra-meaty pies like the classic Oggie (a pasty bulging with steak, potatoes, onion and rutabaga, with some red wine gravy on the side) to more than a dozen vegetarian varieties, including a very good Balsamic Portabello pasty. The restaurant’s friendly pub atmosphere – and craft beer list – makes this a worthy destination for taking a food and drink timeout.

On a more typical weekend, Phoenix is probably more famous for its terrific pizza than its nail-biting sports action. If you’re a diehard pizza aficionado, you’ll probably want to make the requisite pilgrimage to Pizzeria Bianco (the restaurant has a small location at downtown’s Heritage Square, but you’ll probably have more luck finding a seat at the larger Town & Country offshoot in uptown Phoenix). Bianco’s, though, is hardly the only game in town. Pomo Pizzeria Napoletana is another great wood-fired pizza joint whose pizza has been certified as “Vera Pizza Napoletana,” a status conferred to pizza-makers who carefully adhere to the methods and traditions of traditional Neapolitan pizza-making. Pretty much every pie on the menu is great, but you can’t get more classic than the Buffala Verace, which is topped with San Marzano tomatoes, imported mozzarella di buffala, fresh basil, and extra-virgin olive oil. There are three Pomo locations around town, including one in downtown Phoenix that’s within walking distance to Final Four fan events.

This stylish Irish pub delivers elevated pub fare in a fun downtown setting. Service tends to be friendly and fast, and the expansive, group-friendly menu should please even picky eaters. Salads, sandwiches, burgers, and pub classics like fish and chips are all on the menu. The First Street burger is oversize and juicy, topped with ringlets of caramelized onions, red peppers, and a very good garlic aioli. Other highlights include the pork belly sliders, smothered in a sweet-spicy honey-Sriracha glaze, fish and chips, and if you’re trying to eat a little lighter, the chicken kebabs are pretty good. Whatever you order, though, be sure to get it with a side order of the house fries, which are hand-cut and extra-crispy. The kitchen stays open until midnight on most nights, making this a good spot for late-night eats in downtown Phoenix.

If you need a quick grab-and-go taco infusion, Sonora Taco Shop is a tiny storefront taco joint that’s about a five-minute cab ride from downtown Phoenix. Eating here is a convenient and delicious way to sample the city’s Sonoran-style Mexican food, and at less than $2 bucks a taco, lunch here won’t break the bank, either. The standard order is a couple of the carne asada tacos, filled with grizzled, juicy, gently charred nubs of chopped steak, which you can punch up various salsas from the salsa bar. You’ll also find great chicken tacos on the menu, too, along with Sonoran specialties like caramelos – gooey, meaty flattop-griddled quesadillas. There isn’t much of a dining room to speak of, but the restaurant does have an outdoor patio.

This local, fast-growing, lucha libre-themed taco chain specializes in stewy, drippy guisos caseros, the homestyle Mexican braises that take hours to cook and mere seconds to devour. The standard order here is a plate of five street tacos. There’s a smoky, rich chicken tinga, fragrant with the deep scent of grilled onions. There’s a finely shredded beef in a savagely hot red chile sauce, and there is a very good and very spicy chile verde, the soft, spongey hunks of meat hot enough to make your lips go slightly numb. The carnitas are pretty great, too – the scraps of pork are cooked to a delicious crisp, and they’re full of rich, garlicky flavor. The Peoria location of Mucha Lucha Taco Shop is about 10 minutes north of the University of Phoenix Stadium via the Loop 101 Freeway.

Looking for a solid diner-style restaurant that offers all-day breakfast options like homemade biscuits and gravy, buckwheat pancakes, and specialty omelets? You’ve found it at Mercer’s Restaurant, a cozy, family-owned eatery that’s only about a 10-minute drive from the University of Phoenix Stadium. Along with all-day breakfast platters, the restaurant offers a large lunch and dinner menu featuring sandwiches, salads, steak, and seafood entrees. The digs aren’t fancy, but the price and quality are certainly right: There are few places in the city where you can still find a prime rib with potatoes for less than $15, but Mercer’s is still one of them.

One of the fastest-growing microbreweries on the west side, Dubina Brewing Co. is a family-run operation that also features a sizable kitchen and spacious dining room. On the drink side of the menu, the brewery is probably best known for its citrusy Blood Orange IPA. If you can’t decide, though, you can sample a small flight of five the brewery’s nine beers for less than $10. Pair the beer with some of the kitchen’s homemade fried pickles, a giant pretzel with beer cheese and mustard, or maybe an order of the very good house wings, featuring the kitchen’s own spicy-tangy “hop” sauce. Specialty burgers, brats, salads, and great grilled cheese round out the menu.

Looking for high-end sushi in the desert? Or maybe just a break from the sports bars? You’ll find that and more at Roka Akor, the upscale Japanese steakhouse and sushi restaurant with locations in San Francisco, Chicago, and central Scottsdale. The ambiance is sleek and decidedly upscale, and the menu features spendy eats like Wagyu beef and dry-aged cuts, plus a sizable assortment of cold and hot seafood small plates. One of the most popular menus at Roka Akor is the premium sushi, sashimi, and nigiri list, which features fish that’s flown in fresh daily. The tuna flight sushi platter is pricey, but highly recommended.


Craft 64
6922 East Main Street, Scottsdale
480-946-0542
Located on a quiet stretch of Main Street in Old Town Scottsdale, Craft 64 is low-key pizzeria and bar with a healthy craft beer obsession. The drink menu features a well-rounded wine list with almost 30 bottles available by the glass. But it's the beer list — a rotating selection of about 36 craft brews on tap, all local — that keeps the bar packed (the "64" in the restaurant's name refers to the 64 ounces in a growler, which are available for purchase). On the food side, there a good selection of sandwiches, salads and Neapolitan-style pizza creations, cooked very quickly over high temperatures in an oven imported from Italy. Try the spicy-savory Aji pie, which is studded with juicy rounds of fennel sausage that’s complemented by a jalapeño-laced sauce and generous amounts of ricotta.