The shrimp and catfish platter at Mingo's comes with fried catfish, shrimp, french fries, hushpuppies, and coleslaw. Samantha Pouls
Spring has sprung, and the Valley's food scene is entering one of its best times of year. Now is the time to get out into the world, soak up the weather, and enjoy some great food. We've been lucky to have some promising openings in recent weeks, restaurants all over that map that have one thing in common: They aim for the hearts and stomachs of Valley diners. Here are four recent metro Phoenix openings that have us hungry.

Mingo's serves a variety of po' boys, including the catfish po' boy.
Samantha Pouls
Mingo's Louisiana Kitchen
Mingo's Louisiana Kitchen, a Louisiana-style food truck that has operated for more than two years, just opened its first storefront. The brick-and-mortar storefront in south Phoenix serves Louisiana classics like shrimp, catfish platters, and several takes on the po' boy. The po' boys include roasted veggie and goat cheese po' boys, oyster and bacon po' boys, and your good, old traditional shrimp po' boy. Dishes are made with seafood from Louisiana, many with Mingo's remoulade. The sauce may be best when paired with a shrimp and catfish platter. The dish features fried shrimp and catfish, a pile of french fries, coleslaw, and hushpuppies.

Pubblico Italian Eatery is now open and serving everything from wood-fired seafood pizzas to bruschetta.
Courtesy of Pubblico Italian Eatery
Pubblico Italian Eatery
Pubblico Italian Eatery is a new Italian restaurant on Seventh Street serving mostly old-school dishes, but a few new-guard options as well. The kitchen is led by chef Danny Garcia, who has more than 25 years of experience making pasta. Each pasta is made at Pubblico. Pasta dishes include clam linguine, seafood fettuccine, and lobster ravioli. The ravioli comes with shrimp and scallops in a brandy cream sauce. Pubblico's menu also features many Italian-American offerings, everything from chicken Marsala to tiramisu. Pizzas are wood-fired. Some pies feature seafood like lobster and scallops with a cream sauce, the kind of pizza you won't really see elsewhere. Starters include salads, such as Caprese, and fried calamari.

A spread of food and drink at Taco Chelo.
Melissa Fossum
Taco Chelo
When you walk into Taco Chelo, Aaron Chamberlin's new restaurant on Roosevelt Row, you get a strong sense that you've entered a different kind of taqueria. Artist Gennaro Garcia masterminded the restaurant's brick accents, and the layout of the tiles; he designed the mugs and created the art installations. A wraparound patio boasts a view of the towers of downtown Phoenix, along with a view back into the kitchen, where chef Suny Suntana slings tacos, chicharrones, and frijoles charros. Santana, who grew up in Nuevo León, is the force behind a menu of five tacos, four starters, two salads, one dessert, and specials. He pulls from memories of his grandmother's and mother's cooking. Taco Chelo is a striking, highly original space that could become a fixture of the downtown scene. 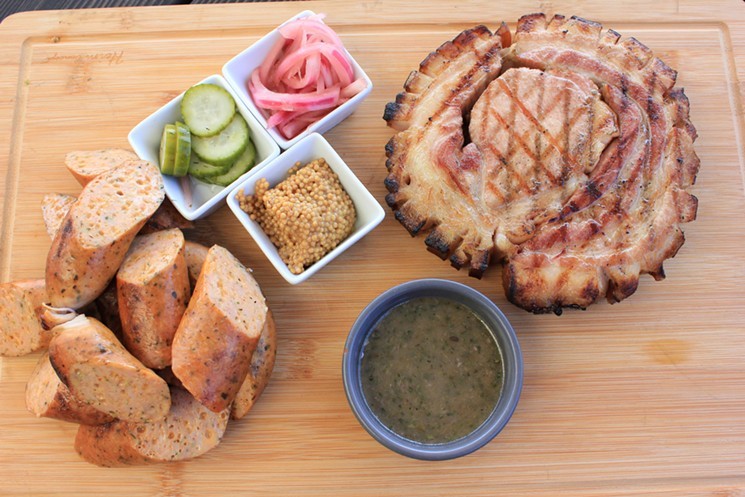 A barbecue platter from Starlite features unusual condiments: various pickles.
Chris Malloy
Starlite BBQ
Since opening in February, Starlite BBQ has shown itself to be an outlier of the Phoenix barbecue scene. Walter Sterling, executive chef at Ocotillo and partner in Starlite, and chef de cuisine Alex Levine deploy cooking methods rogue to barbecue, serve meat with condiments like pickled mustard seeds and red onions, and plate sides alien to the classic tray. Flourishes like these and a sophisticated drink menu let you know you’re in a new, polished, melting-pot kind of barbecue restaurant. Like many of our best barbecue spots, Starlite cooks beef ribs. These come five to an order, slabs of meat tight to bone handles that run the length of a black iron skillet. Their goodness comes partly from that traditional simple barbecue essence – from char, bark, and wood smoke – and partly from added layers of sophistication. At bottom, this difference is what separates Starlite from other barbecue joints. Starlite goes further, using new techniques, meats, and sauces.