Best of Phoenix 2021: Faces of the Valley Food and Drink World

Stephen Jones of the Larder + the Delta. Chris Malloy
There are so many deserving people that make the Valley dining scene go 'round, it's hard to narrow the field to a select few. But that's what we did. Here are this year's movers and shakers in the food and drink scene that took home a Best of Phoenix 2021 award.

The Larder + The Delta 200 West Portland Street, Suite 101
The imaginative New Southern food dreamed up and impeccably executed by Chef Stephen Jones at The Larder + The Delta is like no other cooking in town, and no other chef feels even vaguely similar. His hot chicken can hang with any fried chicken in Arizona. He also plates creations like tuna crudo with rhubarb vinegar and leaf-thin radish, unreasonably delicious hoe cakes, and a legendary Buffalo cauliflower. There are always next-level ingredients woven through his food in some beautiful, until-then-unknown way: special vinegars, pickles, smoked ingredients, heirloom beans and rice. His cooking has so much richness yet so much lightness and finesse. What's more, Jones roots his cooking firmly in near and far American history. Posting up at his bar always feels like a celebration. We're lucky to have the opportunity to eat here in Phoenix.

Valentine 4130 North Seventh Avenue
Few restaurants capture the weirdness of our desert city like Valentine, which has nailed a grand vision of modern Southwestern cuisine. Where to begin with this restaurant? Everything from the pastries to the coffee to the food to the breakfast to the design to the front bar to the back bar is not only on point, but about three levels more thoughtful than expected, creative, delicious, and completely rooted in our region. Donald Hawk (together with a capable team) hits some stunning highs in the kitchen, including an elote pasta, smoked chicken, and a 2.0 version of his splendid brown butter crudo. Antonia Kane bullseyes the baked goods, from heirloom grain cookies to mulberry viennoiserie. Blaise Faber and Chad Price have had this place absolutely humming from its earliest days. We are absolutely jazzed to see where the years take Valentine — and, by logical extension, the cutting edge of Southwestern eating.

Chris Bianco
In the dark first summer of the pandemic, Chris Bianco took to social media to post inspirational messages and videos. He adapted, rolling out a New York-style pie, relocating Tratto and Bar Bianco, releasing a late-night menu, adjusting again and again and again. Sous chefs and other important cooks in the Bianco micro empire left for new pursuits. Somehow, despite the turnover of key players, quality hasn't yielded an inch. Pizzeria Bianco still churns out its legendary pizza and even stunning chicken cacciatore and other specials. Pane Bianco remains a sandwich and Sicilian pizza utopia. Tratto still plates pasta at least one tier above any other Italian joint in town. Most importantly, Bianco has remained a kind leader through it all.

Rene Andrade
By some measures, Rene Andrade isn't a new chef. He has cooked at big-name restaurants up and down the Valley. Recently, he oversaw the kitchens at Ghost Ranch and the now-closed Tempe Public Market Café. Now, after a mid-pandemic move, Andrade has become an executive chef with a restaurant his way channeling his past and his experiences. This and the wonder of eating at Bacanora feel totally new. Sure, he has had help from friends and family at Bacanora, which has already become one of the most exciting and soulful places to eat in town. For Bacanora and the future that now awaits following this young chef's career change, Andrade is Phoenix's best new chef.

James Beard Foundation Women of Arizona
Earlier this year, the James Beard Foundation Women of Arizona, a movement that includes 15 female chefs, launched a series of takeout tasting menus across metro Phoenix. Each menu offered a starter, main course, and dessert — a three-course menu from three local chefs, packaging different local restaurant offerings into one meal. Participating restaurants and their respective chefs (and owners) included FnB and Charleen Badman; Songbird Coffee House and Erin Westgate; Maya's Cajun Kitchen and Maya Bartlett; 24 Carrots and Sasha Raj; Lori Hassler of The Farish House; Lori Hashimoto of Hana Japanese Eatery; Jennifer Caraway, founder of The Joy Bus; The Breadfruit & Rum Bar's Danielle Leoni, and more — making it one of the most complete who's-who collaborations of female chefs in the Valley ... maybe ever. The group was encouraged by the national group Let's Talk, part of the James Beard Foundation Women's Leadership Program, and they still have lots more to do. We'll be watching — and eating. 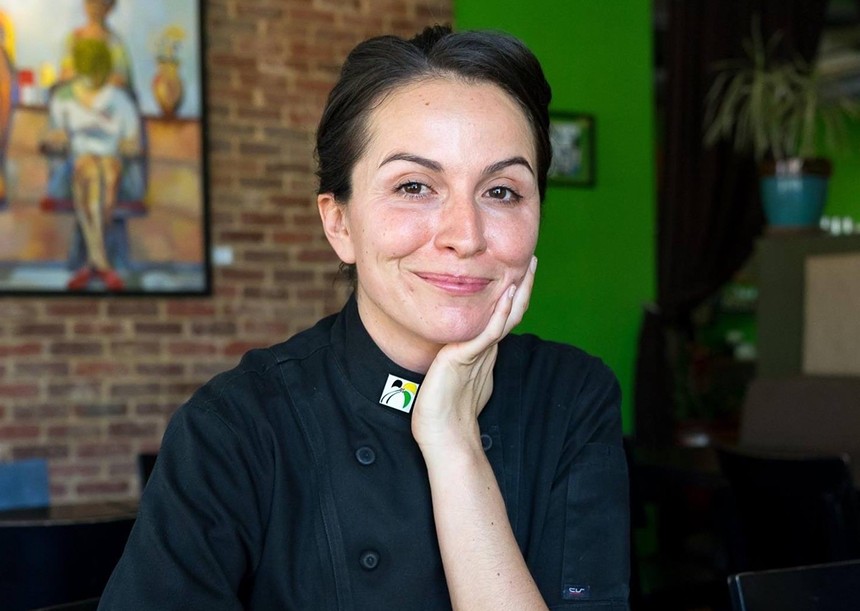 Danielle Leoni
Chef Danielle Leoni is a James Beard Award-nominated chef and a pillar of sustainable restauranting in Arizona — dare we say the country. Here's a quick resume: She holds an Executive Master of Sustainability Leadership from ASU, the James Beard Foundation awarded her a "Seafood Sustainability Seal," and she's a member of the Monterey Bay Aquarium's Seafood Watch Blue-Ribbon Task Force. But none of that mattered when COVID hit. Within weeks, she shuttered her restaurant, The Breadfruit & Rum Bar, penned an open letter to Governor Doug Ducey on behalf of local eateries, and started the Arizona Small Restaurant Coalition. Yet her pandemic work was just getting started. Since then, Leoni and her Breadfruit team have delivered high-quality, locally sourced Jamaican food to A New Leaf and Roosevelt Community Church to feed families experiencing homelessness. She has joined the James Beard Foundation Women of Arizona alliance to promote female-owned restaurants in the Valley. And, during one of the most memorable election days in history, Leoni was part of Chefs for the Polls — a nonpartisan effort initiated by World Central Kitchen that fed voters (for free) at the Camelback Center on November 3.

Danielle Carlock
During the pandemic, Scottsdale Community College faculty member Danielle Carlock got up to some interesting work. Carlock's sabbatical project was meant to address food insecurity for students through a farmers' market-style event at SCC, where Carlock would distribute free vegetables and edible plants from the campus food garden. But when SCC shut down due to COVID, she instead expanded the other part of the project: the free Maricopa Native Seed Library, which focuses on native plants — ecologically specific to Maricopa County — and seeds that aren't readily available at Valley nurseries (many of which Carlock herself collected in the field). These native seeds are free to students, faculty, and the public. They come in packets of 20 or so, which can be picked up or mailed. Food plant seeds include kale, lettuce, firecracker penstemon, white Sonora wheat, Salt River Pima pea, and desert chia. And now, Mesa Community College's Red Mountain campus is home to many of the parent plants, making it something of a showroom for the seed library.

Project Roots AZ
Co-founded by former Phoenix Mercury player Bridget Pettis, nonprofit urban farming organization Project Roots AZ grows fresh fruits, herbs, and vegetables on land at the Spaces of Opportunity garden in Phoenix and the Local First Community Garden in Mesa. In addition to providing plots for people to farm their own food, the founders and staff of Project Roots AZ make community education a huge part of their activities, offering garden boxes for people to grow their own food on their patios or balconies, conducting gardening and yoga classes, making produce box deliveries, and running a soup kitchen out of their Mesa space. Project Roots AZ's garden bounties can also be found at the Downtown Phoenix Farmers Market.
KEEP PHOENIX NEW TIMES FREE... Since we started Phoenix New Times, it has been defined as the free, independent voice of Phoenix, and we'd like to keep it that way. With local media under siege, it's more important than ever for us to rally support behind funding our local journalism. You can help by participating in our "I Support" program, allowing us to keep offering readers access to our incisive coverage of local news, food and culture with no paywalls.
Make a one-time donation today for as little as $1.