First Taste: Is STK Scottsdale Worth the Hype? 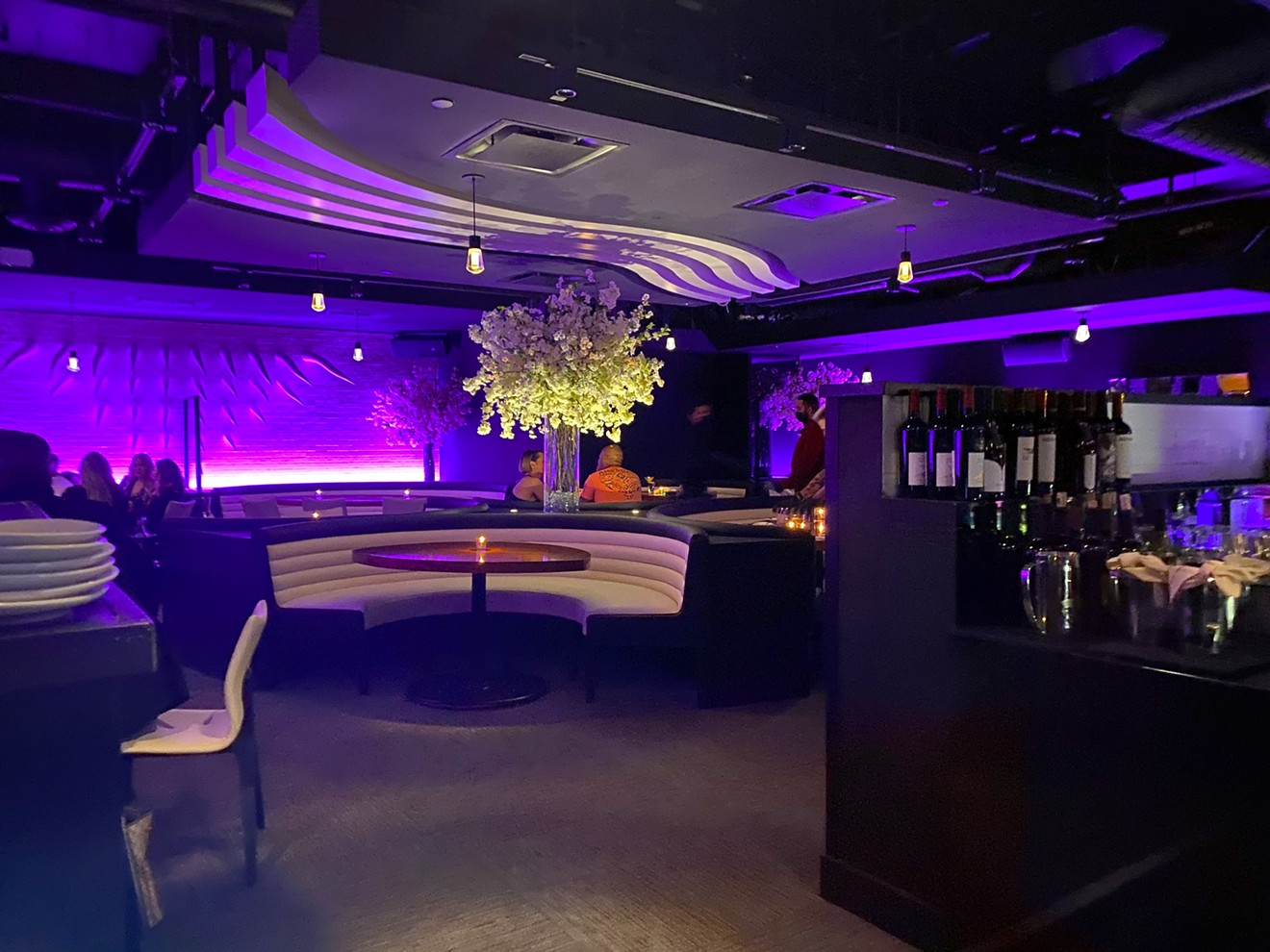 The dining room was decidedly modern nightclub meets posh steakhouse. Natasha Yee
When a new spot opens in town, we're eager to check it out, let you know our initial impressions, share a few photos, and dish about some menu items. First Taste, as the name implies, is not a full-blown review, but instead, a peek inside restaurants that have just opened — an occasion to sample a few items and satisfy curiosities (both yours and ours).

High-end steakhouses aren't hard to find in Scottsdale; follow your nose to rich cuts of meat and you'll often find a joint with a posh interior populated with Botoxed diners. A new one of these, STK Scottsdale, opened in January. It's part of The One Group restaurant network (which also includes Kona Grill) and in a press release it was referred to as "Not Your Daddy's Steakhouse."

We were ready to be impressed. We arrived a few minutes after our 8:45 p.m. reservation and waited outside by a heat lamp near Old Town neighbors like Tapas Papas Fritas, Barrio Queen, and Merkin Vineyards. The meats beckoned. A spunky hostess donning a black blazer showed us to our seats, a circular black-and-white booth like a leather car interior hugged a glossy round wooden table.

Surrounding us were violet lights and white gladiolas.  A bar in the center of the room separated the main dining area from the lounge, where horns protruded from a white brick wall, apparently a signature STK design element. The Mint, a now-defunct Scottsdale dance club, came to mind.

Culinary dilemmas loomed. Splurge on a shellfish platter? Mess with the miso-glazed sea bass? Devour the 34-ounce, dry-aged tomahawk? All prospects were on the table. We ordered the spiced watermelon cocktail and waited for the tequila to do its work. 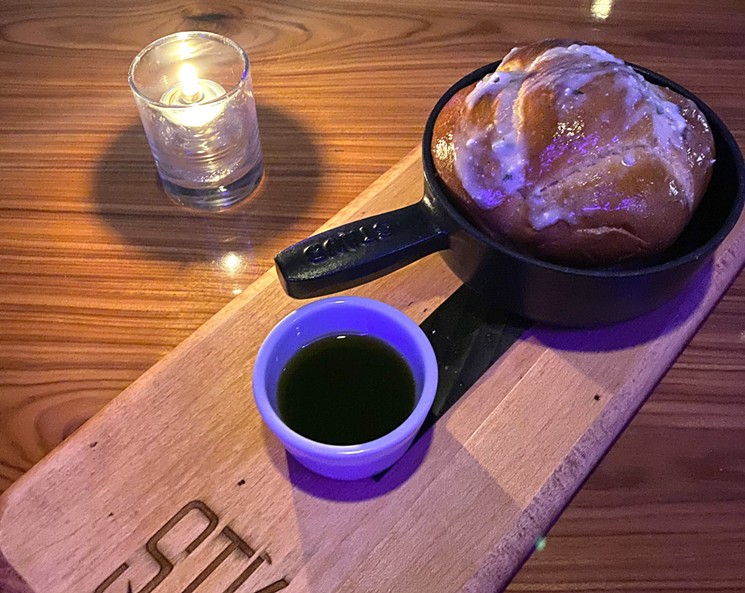 But that bread with blue cheese butter? Incredible.
Natasha Yee
Our server recommended the tuna tartare. Diced Hass avocado is piled with marinated ahi, topped with taro chips, and served in a pool of soy-honey emulsion. It was fine, though not as good as the tuna tartare guacamole at The Montauk, another nearby Scottsdale joint.

For the entree, we went with the Baby Gem Caesar, a 6-ounce filet, and a side of Parmesan truffle fries. Would we like bread with that? Yes, we would. We didn't know it, but the bread would turn out to be our favorite order of the night. A wooden slab arrived, carbohydrates in-tow, within a few minutes. It looked like a plump golden cake adorned with a glaze of frosting. Except it was not that; it was bread and blue cheese butter. Again: blue cheese butter. The dough was thick and cakey. We dipped it into the chive-infused olive oil.

The Baby Gem Caesar came next: romaine and iceberg lettuce with Parmesan cheese, croutons, and a zesty Caesar dressing. It was fresh but lacking in pizazz. Grilled hearts of palm or charred Campari tomatoes could give the classic some edge.

Then for the moment of truth: the 6-ounce filet, medium-rare. The cut was tender, juicy, and sliced per our request (like the cow, we wanted to graze). STK serves black Angus cattle shipped primarily from Nebraska and Iowa, according to the menu. But the 6-ounce cut came on an enormous oval plate, dwarfing the lonesome piece of beef into oblivion. So much for presentation. 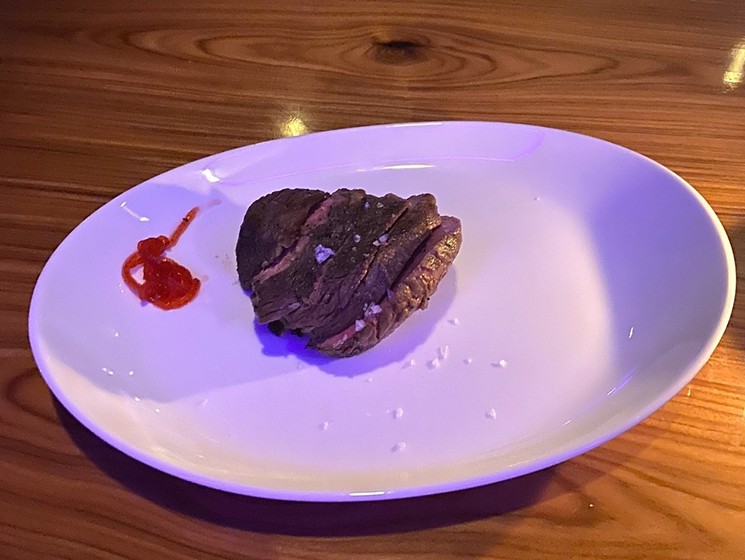 We had no gripes about STK's six-ounce filet, except for the presentation.
Natasha Yee
The Parmesan truffle fries weren't what we expected, either. They were crispy, flavorful, cheesy, but more like Parmesan truffle potato wedges — the starch washing out some of the intense flavors. We still devoured the things, dunking them into their accompanying chipotle aioli. But we wondered if we should have tried the mac and cheese (of which there are traditional, bacon, lobster, and trio varieties) instead.
We glanced at our lonely pink cocktail as the DJ in the corner set the vibe: pop mixed with bouts of reggaeton and chill rap. The Spiced Watermelon, in a Tajin-rimmed martini glass with a fresh wedge garnish, was refreshing, though it could have used a kick of ... something.

For dessert, the Bag O’ Donuts caught our eyes, but we went with the warm chocolate chip cookie instead. The cookie came out in a rectangular cast-iron pan with vanilla ice cream and chocolate and caramel syrup. It was gone in 30 seconds. Very good, although it's hard to mess that up.

STK is the type of place where weekend warriors might dine before partying at Kelly’s at Southbridge (when it’s entirely safe to do so) or splurge on a bottle at nearby nightclubs like Riot House. But for our money, its expensive dishes and unimaginative interior didn't live up to the hype — Nobu and Toca Madera serve better cuisine in a more refined ambiance.

Maybe STK Scottsdale still has kinks to work through. But hey — we did really like that blue cheese butter.
KEEP PHOENIX NEW TIMES FREE... Since we started Phoenix New Times, it has been defined as the free, independent voice of Phoenix, and we'd like to keep it that way. With local media under siege, it's more important than ever for us to rally support behind funding our local journalism. You can help by participating in our "I Support" program, allowing us to keep offering readers access to our incisive coverage of local news, food and culture with no paywalls.
Make a one-time donation today for as little as $1.