The chopped salad and wedge are always top of mind at Kantak restaurants. The Gladly
The greater Phoenix area is nothing like Reggie’s, where you can’t even get a big salad. Full-meal salads are found on menus across the Valley — sometimes in restaurants that would obviously offer a nice selection of salads, but also at places that may be a surprise to some.

In the spirit of going green, here's a quick list of 12 places with some of the best salads in town.

Citizen Public House and The Gladly
7111 East Fifth Avenue, Scottsdale
2201 East Camelback Road
This salad is so good it has its own Facebook page and T-shirts — and to be fair, the attention is well deserved. Served chilled, this salad is a well-organized affair, with each ingredient arriving at your table in a neat little line. The list of add-ins includes Alaskan smoked salmon, Israeli pearl couscous, chopped arugula, pepitas, freeze-dried corn, and tomato. Sure, it's a simple recipe — everything just gets blended with a Pecorino Romano ranch dressing — but the balance of flavors and textures means we can never resist ordering it. The dish originated at Cowboy Ciao and lives on at Citizen Public House and The Gladly.

Otro Cafe
6035 North Seventh Street
If you’re looking for something lighter than a burrito when you hit up Chef Doug Robson's Otro Cafe, we'd suggest the Cortado salad. Egg, cheddar, freeze-dried peas, and corn nuts top off a bed of kale and greens mixed with a creamy, house-made, herb-infused buttermilk ranch. It also pairs perfectly with one of Otro’s famous margaritas — or two, because no one is judging.

Pane Bianco
4404 North Central Avenue
This is not your grandma's chicken salad. Tender chopped chicken is mixed with mustard seeds, chopped celery, apple, basil, and red onion, and served over a giant, leafy spring mix with salt and pepper heirloom tomatoes and a simple-but-elegant balsamic dressing. Not too heavy, yet totally satisfying, it's available for dine-in or take-out at Pane Bianco — the choice is up to you, and we promise it tastes great no matter where you dig in. Be sure to order the lemon pesto dressing at Cornish Pasty.
Lauren Cusimano

Cornish Pasty Co.
Multiple Locations
Yes, this is a local chain of cool English pubs known for its pasties and cocktails, but the team here can also scare up a mean salad. In fact, a whole section of the Cornish Pasty menu is dedicated to big bowls of greens, veggies, and protein — or not. The Greek salad comes recommended, with its mixed greens, feta, kalamata olives, red onions, cherry tomatoes, and cucumber. We also suggest the lemon pesto dressing — a creamy green dream in a cup. Feel free to add chicken, more veggies, vegan chicken, roasted turkey, beef, mojo jackfruit, pork and sage sausage, or salmon.

Ocotillo
3243 North Third Street
Red and green gem lettuce come together with bitter radish just so it can all be topped with buttery blue cheese, juicy tomatoes, and creamy dill dressing in this lunch and dinner offering at Ocotillo in central Phoenix. This salad, however, is not for the weak of heart. It’s a surprisingly hearty portion and also comes loaded with avocado, egg, and crispy bacon.

Zinburger
Multiple Locations
You wouldn't expect a burger bar like Zinburger to have a great Asian chicken salad, but we promise this one's worth a try. Julienne carrots, bell peppers, and chopped mandarin oranges are tucked into mixed greens and red cabbage, then topped with warm grilled chicken, Asian sesame ginger meets goddess dressing, sesame seeds — and, maybe most important, a sprinkling of crisp wonton chips for a texture that’s just about perfect. 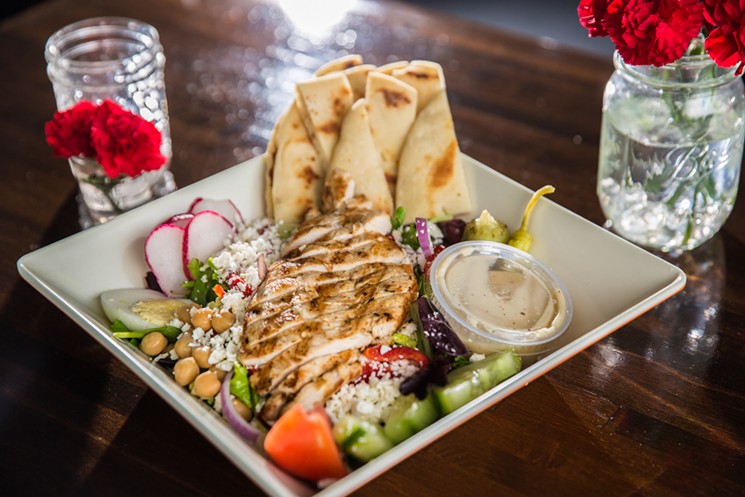 George’s Kitchen
6102 North 16th Street
One of the lunch specials at George's Kitchen, a family-owned, modern Greek eatery in uptown Phoenix, is the chicken feta salad – and if you happen to develop a taste for it, you’ll often spend lunch in the sleek dining room (though delivery and takeout service is available). The salad consists of organic mixed greens topped with tomato, onions, kalamata olives, pepperoncini, cucumbers, and sliced bell peppers. The greens are served under a generous amount of free-range, grilled chicken breast and enough imported French feta to satisfy even the biggest cheese fiend.

House of Tricks
114 East Seventh Street, Tempe
At House of Tricks, you'll need to take a deep breath before reading all the ingredients in the Seared Wasabi Pea-Crusted Saku Tuna. Wasabi pea-crusted seared Saku tuna comes perched atop a bed of spring mix, pickled tomatoes, avocado, sliced cucumber, edamame, wonton chips, and, yes, more wasabi peas before being dusted with Shaoxing-miso dressing and garnished with fresh cracked pepper. The wasabi peas and edamame give this salad an unmistakable Japanese vibe, and we love the bold flavors that mean this salad is light, but far from light on taste.

Flower Child
Multiple Locations
Flower Child has your vegan salad options on lock — as do many other vegan eateries across greater Phoenix. Thoroughly coated, but not drenched, in a Caesar-style dressing that’s more tangy than salty, a blend of spinach and romaine lettuces meets tomatoes, cauliflower, and gets a little bit of crunch from earthy sunflower seeds. You might miss the traditional Parmesan cheese, but the addition of creamy avocado will help you forget. 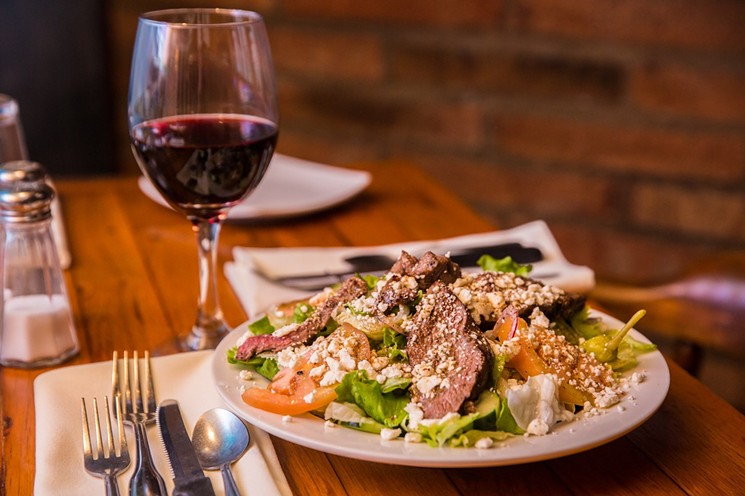 Feeney's Restaurant & Bar
6314 North 12th Street
Part of you might come to Feeney’s for the Old World feel, but the main reason is probably the menu — namely, the Feeney’s Steak Salad. The Feeney's Steak Salad comes as house salad-style greens under an abundance of julienne vegetables (thin strips of veggies like carrots and red onion), tomato, cucumber slices, and juicy, sliced beef tenderloin. The dish is topped with a generous amount of feta cheese and Greek dressing.

Original ChopShop Co.
Multiple Locations
The Beet Chop at the Original ChopShop Co. is full of golden beets, plus house greens, arugula, sour apple, goat cheese, cashews, and golden raisins. The cashews round out the mix, giving each bite a powerful crunch that goes well with a citrus-infused red-wine vinaigrette. We're all about gold, especially when it comes to beets.

The Henry
4455 East Camelback Road
This simple but flavorful salad at The Henry combines romanesco, broccoli, snow peas, green beans, Brussels leaf, arugula, pistachio, and tahini vinaigrette with a base of shredded, good-for-you kale. Unlike some unwieldy kale creations, everything in this salad is chopped down to bite-size pieces and the slightly bitter taste of the kale gets balanced by the vinaigrette.

Editor's note: This story was originally published on June 20, 2016. It was updated on May 29, 2021.
KEEP PHOENIX NEW TIMES FREE... Since we started Phoenix New Times, it has been defined as the free, independent voice of Phoenix, and we'd like to keep it that way. With local media under siege, it's more important than ever for us to rally support behind funding our local journalism. You can help by participating in our "I Support" program, allowing us to keep offering readers access to our incisive coverage of local news, food and culture with no paywalls.
Make a one-time donation today for as little as $1.