Inside the new Greenwood Taproom. Natasha Yee
Think of a brewpub. Probably, you're imagining a seating area heavy with dark wood and an abundance of screens. Bearded dudes with hands stained a fiery buffalo-sauce red. Flannel.

Greenwood Brewing, not so much. This female-owned and -operated brewery, which opened its Roosevelt Row doors on July 18, is modern, light, and airy, with a Santa Barbara vibe and lots of natural sunlight. It is pretty. It's also quite welcoming: Namesake founder Megan Greenwood likes to keep the doors open to promote airflow — and to let the neighborhood know Greenwood Brewing is officially open for business. Greenwood Taproom sits at Roosevelt and Fourth streets.
Natasha Yee
Greenwood started making beer with a five-gallon home-brew kit in 2017, and before long was delivering to local breweries. She raised $68,000 on Kickstarter in January 2019 and made plans for her very own brick-and-mortar joint. She found a location at 425 E. Roosevelt, just around the corner from Lost Leaf. "We reconfigured a building which has been here since the 1950s," Greenwood says.

Mackenzie Collier Interiors designed the brewery and "completely elevated what I could have imagined," says Greenwood. "They pretty much took my whole Pinterest board and made what I envisioned a reality." Celine Rille, owner of the McKinley Club, a co-working space in downtown Phoenix that also houses Mackenzie Collier Interiors, made all of Greenwood's golden signs and lettering.

But on to the beer.

Greenwood Brewing currently boasts six on tap, with eight more being cooked up in the production facility across the patio. We visited on a 113-degree Tuesday and ordered a flight of four, asking Kristen, our cheery bartendress — almost the entire staff is female — to surprise us. Bartendress Kristen pours from one of six available brews (though eight more are in the works).
Natasha Yee
The Harvest Diem Spiced Ale tasted vaguely like fall, a season we've lately been daydreaming about. If the vaccine hasn't arrived by then, at least this godforsaken heat should have abated a bit. Speaking of which: How is a place like Greenwood Brewing allowed to stay open under Governor Doug Ducey's current executive order?

"We are a brewery, and our primary purpose is the production of beer," Greenwood told us later by phone. "We have our taproom where people can taste what we're brewing. It's a Series 3 license, since the majority of what we do at the space is manufacture."

On to beer number two, Greenwood’s signature Herstory Brew Pale Ale. Crisp and lightly hoppy with a hint of orange citrus, it was the perfect complement to the Taco Chelo crispy fish taco we'd brought over. (Greenwood's probably not your spot if you're in search of a meal. The charcuterie board was unavailable, and the avocado ceviche in the cooler looked kinda sad, so we'd crossed the hot-enough-to-fry-an-egg Fifth Street and brought back some grub before setting down with our beers. BYOF is allowed.) The Herstory was just the right beer for a scorching summer day. 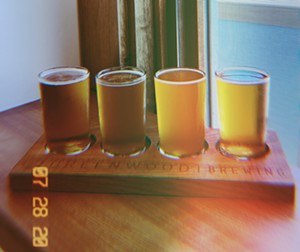 A flight of Greenwood's beers, including its signature Herstory Brew Pale Ale.
Natasha Yee
The Essence Rosemary IPA was earthy and grassy with subtle hints of, yes, rosemary. The First Love Belgian Tripel sounds romantic, and it kind of is. It's the first beer Greenwood made, and it’s a true Belgian brewed with a hearty dose of sentimental value.

We took a look around. The wooden bar, which under non-COVID circumstances seats eight to 10, is adorned with a marble backsplash topped with arched mirrors and large, globe-shaped brass light fixtures. The sun gives the space an effervescent glow, creating an almost beachy atmosphere against the pale wooden bar.

COVID has considerably reduced indoor seating — there's just eight spots available inside the brewery — so the patio is where it's at right now, despite the heat. There are actually two patios: The Greenwood Courtyard is to the east of the bar, and the Greenwood Garden is to the west. The latter is sandwiched between the bar and the facility where they make the beer.

Our verdict: The design, the founder, and the female focus sets Greenwood apart from your average brewery. As long as you bring your own food, and maybe a personal fan, it has our stamp of approval. Here’s to creative women making ice-cold beer, no matter how hot it is outside.
KEEP PHOENIX NEW TIMES FREE... Since we started Phoenix New Times, it has been defined as the free, independent voice of Phoenix, and we'd like to keep it that way. With local media under siege, it's more important than ever for us to rally support behind funding our local journalism. You can help by participating in our "I Support" program, allowing us to keep offering readers access to our incisive coverage of local news, food and culture with no paywalls.
Make a one-time donation today for as little as $1.