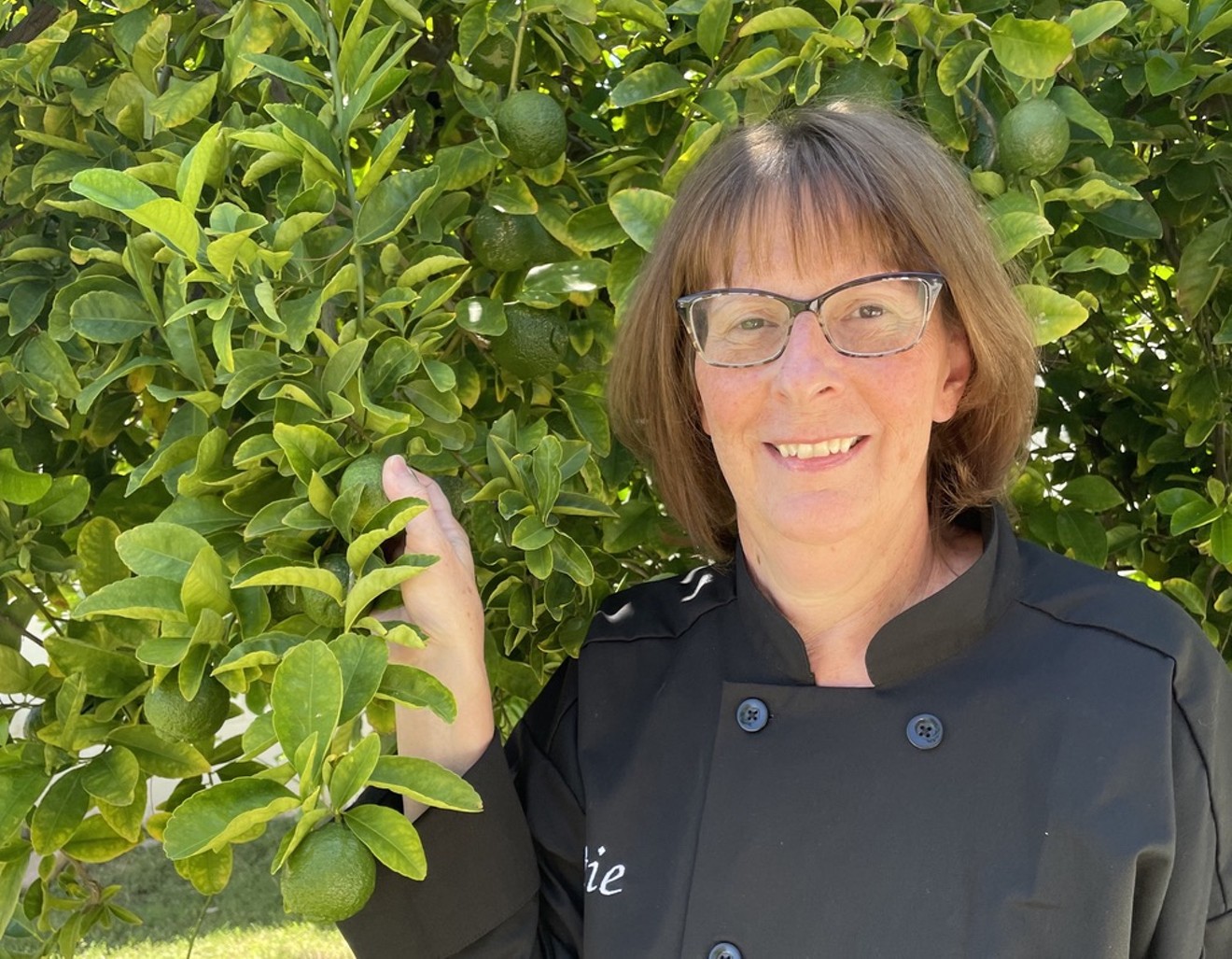 Katie Murwin, founder of Sensory Cooking, Sensory Cooking
There are picky eaters, and then there are kids for whom the sensation of a grape tomato exploding in their mouth is unbearable.

Children with autism spectrum disorder tend to favor particular sensations and avoid others (loud noise, particular colors, too many people). The same applies to food: They often are extremely sensitive to certain tastes, smells, temperatures, textures, and appearances. This sensitivity causes avoidance of specific foods or food groups and restrictive eating.

Sensory Enrichment Therapy, a science-based approach in which certain experiences can help to mitigate such responses in the brain, provides various sensory stimuli on a daily basis for individuals with autism.

Katie Murwin, who started the Phoenix-based Sensory Cooking in 2017, uses the kitchen for Sensory Enrichment Therapy, teaching kids with autism how to cook.

Twelve years ago, Murwin and her husband, Todd, started a nonprofit organization called Kids With Autism Can, to help individuals with autism gain independence through social activities, education, and therapy.

Murwin noticed how her own son, who barely smiled, would light up when he helped her in the kitchen.

She researched cooking schools for special-needs children but came up empty-handed, so she decided to do it herself.

Murwin began with Nick and a group of eight kids they had met through Kids With Autism Can. Before COVID-19, the sessions took place at Murwin's house. The kids would prepare a meal from start to finish, then sit down and eat together. Most times, a speech pathologist and an occupational therapist were present.

“I don’t force them to eat everything, but I invite them to try something new,” explains Murwin. “I say, ‘If you can’t eat it, will you smell it or pick it up and feel it?’” 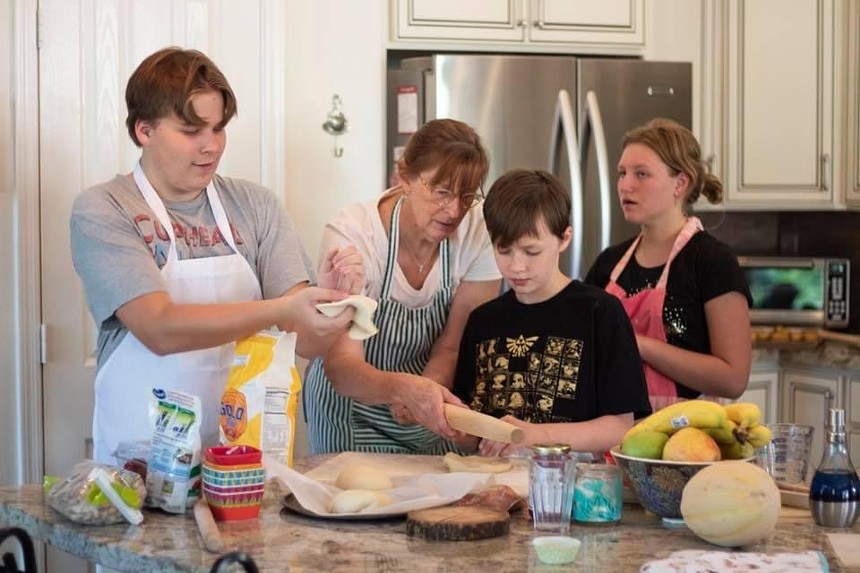 Katie Murwin teaching students how to work with dough.
Sensory Cooking
When COVID-19 hit, she partnered with Give Garden — a recipe delivery service for kids developed by a registered dietitian — to deliver food boxes to the families, and held classes on Zoom.

“I’ve had 30-year-olds and 7-year-olds, and it works," Murwin says. "Some are nonverbal, but they can give me a thumbs-up or maybe say ‘Yes.’ I think it works because people who sign up for this are all in.”

She doesn’t require a diagnosis and sometimes works with neurotypical children, but for the most part, she focuses on neurodiverse individuals and asks a parent or respite person to be present.

What’s more, Murwin offers the sessions at no charge. “We really wanted the kids on the spectrum to have something to do that was positive, that wasn’t expensive or difficult,” she says. The same is true for Kids With Autism Can social events.

For more advanced or one-on-one teaching, Sensory Cooking accepts payment from the state-funded Empowerment Scholarship Account, which is accessible to eligible families who home-school. Aside from books and school curriculum, these funds cover tutoring and therapies. Murwin does accept private pay beyond the sessions, but the cooking sessions themselves are free.

“I wanted to provide something that didn’t exist for us,” she says.

Others have done the same.

Denise Resnik, co-founder of the Southwest Autism Research & Resource Center, started Phoenix bakery business SMILE Biscotti with her son, Matt, in 2013. “Matt helped me bake at around age five," Resnik recalls. "He wouldn’t eat any of it because he was such a picky eater, but it was something we could do together. Also, the activity was precise, had a beginning and an end, and allowed developing life skills of shopping and cleanup.”

Matt Resnik, who is largely nonverbal and whose parents were once advised to institutionalize him, is now 30 years old and has his own business baking and selling biscotti.

The Sensory Cooking website includes recipes and videos. The videos come with two components — sensory and language — designed by the group’s occupational therapist and speech pathologist.

The sensory component focuses on textures, flavors, smells, and sounds. For instance, in a baking class or video, the prompt might ask students to compare the texture of almond flour with regular flour.

The language component involves asking questions. In the above case, students might talk about gluten or gluten-free foods.

"In case you wonder why I understand your kiddos' food issues, let me show you what they look like in our family!" — Nick Murwin
Sensory Cooking
Each Sensory Cooking course comprises three three-week sessions:

Session A focuses on reading recipes, the language and sensory components, and preparing one or two items.

Session B involves immersion in sounds, tastes, and smells; an invitation to try new things; and a step toward independence.

For session C, participants prepare a grocery list, shop in person or online, take photos of their groceries, use videos to cook/bake, and send Murwin a photo of the completed dish. “By session C, they are preparing veggie sushi,” she notes.

In the end, students receive a certificate of completion.

Private classes are available for individuals or groups of up to 12 people. The next group class takes place in April, and in June, Murwin will offer classes to Arizona Autism United.

For Murwin, Sensory Cooking is about inclusivity. “Neurodiverse has to really be diverse. I’m perfectly happy to have a class that blends nonverbal with highly intelligent college graduates. We come from our own place and understand that others come from theirs, and we can all function together,” she concludes.

Learn more about Sensory Cooking and upcoming classes at sensorycooking.net.
KEEP PHOENIX NEW TIMES FREE... Since we started Phoenix New Times, it has been defined as the free, independent voice of Phoenix, and we'd like to keep it that way. With local media under siege, it's more important than ever for us to rally support behind funding our local journalism. You can help by participating in our "I Support" program, allowing us to keep offering readers access to our incisive coverage of local news, food and culture with no paywalls.
Make a one-time donation today for as little as $1.