Bar Pesce is now closed. Jackie Mercandetti
Monday, July 29, was the last day of operation for Bar Pesce — chef Cullen Campbell’s well-known restaurant which had just revamped and renamed itself in 2018. Before, the spot hidden around the corner of the shopping plaza at 36th Street and Indian School Road was Crudo, established in 2012. Now, after seven years of Campbell overseeing some sort of culinary operation at 3603 East Indian School Road, Bar Pesce will be closing as well.

Phoenix New Times, which reviewed Bar Pesce in March 2019, reported that, “Against the Phoenician grain, Campbell’s menu at Bar Pesce seems to totally eschew safe options.” Campbell had veered culinarily from Italian roots (Crudo) to other seacoasts of the world, namely Asia (Bar Pesce), but it was where you could find “one of the more fun and daring menus in town." 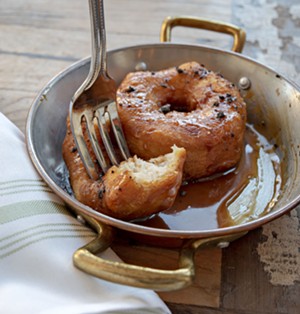 "It's bittersweet to close Bar Pesce after seven years, but it was an amazing ride," Campbell says in a press release. "Thank you to all of our customers for making it a wonderful seven years, we appreciate all the love." No word as of now whether the spot will revamp once again or be closed for good.

The closing follows a week’s worth of specialty dinners and events, which started Tuesday, July 23, and wrapped last night with a good old-fashioned pizza party.

For more information, or to keep an eye on any updates, see the Bar Pesce website.
KEEP PHOENIX NEW TIMES FREE... Since we started Phoenix New Times, it has been defined as the free, independent voice of Phoenix, and we'd like to keep it that way. With local media under siege, it's more important than ever for us to rally support behind funding our local journalism. You can help by participating in our "I Support" program, allowing us to keep offering readers access to our incisive coverage of local news, food and culture with no paywalls.
Make a one-time donation today for as little as $1.