SnapBack Pizzeria took the place of Grand Avenue Pizza Co., which served late-night slices starting in 2015. Aaron Shottenstein
Phoenix is not a city renowned for its late-night bites, so when one of the few options in town closes — and a once-legendary spot at that — foodies and night owls take notice.

Grand Avenue Pizza Co. shut down temporarily for the summer at the end of May. But after a few months, the neighborhood staple, which opened in 2015, announced its permanent closure to the chagrin of many a downtown Phoenix hipster. Now, SnapBack Pizzeria has replaced the joint that anchored Grand Avenue's quirky late-night scene. It hopes to be everything the arts district came to love about its former pizza joint, plus more.


SnapBack Pizzeria is the brainchild of Ryan Moreno, also known as the Hungry Homie. The restaurant officially opened on November 17 featuring pies like the Casey Jones topped with mozzarella, bacon, pepperoni, and mild Italian sausage, and the Vanna White, which includes garlic confit and fresh basil.


"To say I was given a chance to take over a piece of downtown Phoenix history and a huge piece of what makes me into the maniac I am is absolutely the shit," Moreno wrote in an August 18 Hungry Homie Instagram post. "I do not want to see this place go away and get turned into some garbage gentrified condos like the rest of my downtown space has, I want to keep the magic that’s always been at this spot, that will stay at this spot."


In the accompanying photo, Moreno stands in front of a stucco building with a large Grand Avenue Pizza sign on it, donning a black t-shirt and matching jeans, his signature man bun and beard front and center.

Moreno and his staff test pizza recipes for SnapBack’s menu.
Natasha Yee
Before landing at the brick-and-mortar space, the unconventional chef started a mobile pizza business mid-pandemic in October 2020. He became a one-man show at pop-ups, farmers' markets, and in front of bars around the Valley. Equipped with a high-heat outdoor fire pizza oven that could only bake one 12-inch Neapolitan-style pie at a time, Moreno's quest began as a true labor of love.


Then, in February 2021, a former New Times food critic asked readers, Will the Next Generation of Phoenix Pizza Be Mobile? and called one of Moreno's pies a "top-10 pizza in the Valley."

Moreno's fate was sealed, he says. He escalated production to sate the voracious appetites of other hungry homies around town. As his popularity grew, so did the opportunities. He crafted pizzas for hip hop group Migos when they came to Phoenix and for Sneaker Con, a huge sneaker show hosted at the Phoenix Convention Center.


Grand Avenue Pizza had been on summer hiatus for over a month when Moreno received a phone call from former owner Carson Wheeler, in July he says. Prior to the initial closure, the popular pizza joint, which originally boasted an indoor and outdoor seating area, had evolved into a walk-up window concept with pared-down slice and pie options during COVID-19.

During the call, Wheeler told Moreno that he was closing the Grand Avenue eatery, and offered Moreno the opportunity to launch his own brick-and-mortar. Rumors circulated about offers from developers and someone who may turn the property into a parking lot, Moreno says. So he quickly decided to move in.

"The whole idea behind the Hungry Homie is essentially everything that I like as a person rolled into one. So it's music, food, and culture," Moreno says. 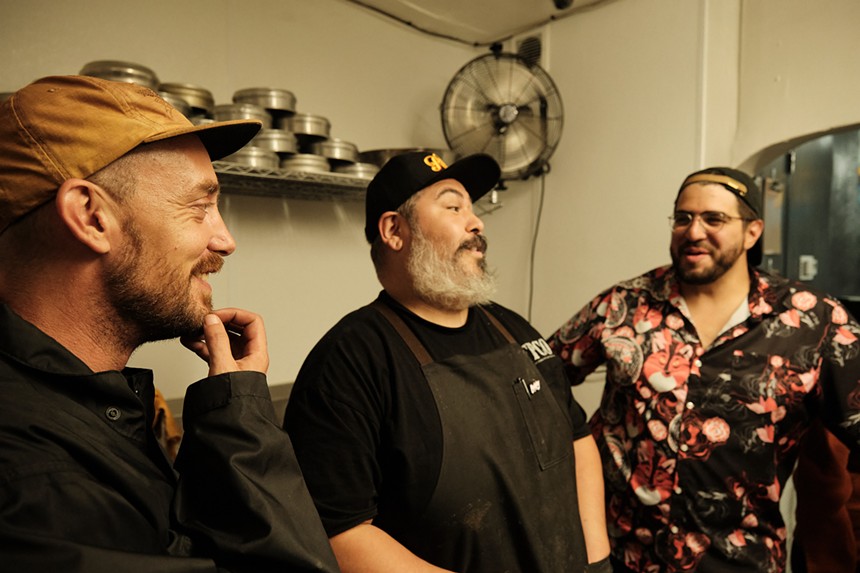 Ryan Moreno (center) has a lot more space inside the SnapBack Pizzeria kitchen.
Aaron Shottenstein
At the height of the Hungry Homie, he did five to six pop-ups per week, making 100 pizzas a night with a small crew, many of which are still part of SnapBack today. They include Christopher Benitez, the director of operations, Adam Braun, the general manager, and Santi Alvarado, the kitchen manager. Together, the men comprise a ragtag bunch with plenty of industry experience, at once goofy, yet serious about their ingredients and pies.

The pizza shop had yet to open during an early November visit, and as Moreno shared the story of the new concept, one of his employees pulled a bubbling-hot pie out of a 600-degree oven. The thick concoction was the first Detroit-style pie the group had experimented with in the SnapBack kitchen.

"That's sizzling," kitchen manager Santi Alvarado noted, sporting a huge grin across his face. "Not bad for the first one, huh? And we had to use a cheesecake pan because that's all we fucking have right now!"


The f-bombs fly around a kitchen filled with Mulino Caputo flour, Bianco DiNapoli tomatoes, and low-moisture mozzarella. The components comprise SnapBack’s “New York-style pizzas with Neapolitan ingredients,” according to Benitez.

The doughy, melty pizza topped with Boar's Head pepperoni was then sliced into four generous portions. Everyone stared at it, in awe of the attempt at a Detroit delicacy this far away from the Motor City.

The kitchen is small but mighty, with two large pizza ovens stacked on top of the other, accommodating up to twelve pies at a time, a far cry from the small-scale setup during Hungry Homie's humble beginnings.

Customers can approach an outdoor window to order, then take their creation home or dine on the patio. Moreno plans to debut indoor dining, the original setup at Grand Avenue Pizza, at some point in the future, he says. SnapBack has a standard menu in addition to a Mystery Pie that changes regularly.
Natasha Yee
SnapBack is part of Uncanny Hospitality, which Moreno runs along with some of his pizzeria team. Their partnership includes concepts like Char's Live, a rhythm and blues club on Seventh and Highland Avenues, and The Lost Leaf,  a green-lit bar, music venue, and art gallery in the Roosevelt Row Arts District of downtown Phoenix, plus plans to grow. Pop-ups from the Hungry Homie are now on hold.

It's SnapBack Pizzeria's turn to step into the spotlight, with a menu that includes the Tie Dye Pie, made with both red sauce and pesto, garlic butter, and lots of mozzarella, and the Julian, SnapBack's signature pizza with ricotta, Italian sausage, and caramelized onions. The Detroit-style pie didn't end up making the cut, but SnapBack is off to a strong start so far, according to Benitez.

"We're killing it so far!" he writes over text. "I hope everyone that loved Grand Avenue Pizza gets to stop by for a slice sometime soon!"

On a late night in downtown Phoenix, when you're wandering around with an empty stomach, buzzed and ready to grub, make your way to SnapBack Pizzeria. The joint has big shoes to fill; patio seating, New york style pizza, Neapolitan ingredients, and all.

1031 Grand Avenue
Wednesday through Saturday, 4 p.m. to midnight
602-253-6107
snapbackpizzeria.com
KEEP PHOENIX NEW TIMES FREE... Since we started Phoenix New Times, it has been defined as the free, independent voice of Phoenix, and we'd like to keep it that way. With local media under siege, it's more important than ever for us to rally support behind funding our local journalism. You can help by participating in our "I Support" program, allowing us to keep offering readers access to our incisive coverage of local news, food and culture with no paywalls.
Make a one-time donation today for as little as $1.