We were standing outside Caspian Market, a Persian bakery and grocery store off North Scottsdale Road. Scotten, the president of Arizona’s chapter of the National Iranian American Council, was trying to convince people to register to vote.

Sparkling new BMWs and Mercedes kept pulling up in front of the store. Stooped white-haired men, young women with impressive eye makeup, and business professionals in gray suits would get out and walk past us, then return to their cars with armloads of warm bread. Scotten gamely tried to engage them in both English and Farsi.

“Register to vote for what?” one woman asked him.

The sky turned purple and pink and then went dark. When I left, there was just one signature on the sign-up sheet.

“The thing that’s ingrained in people who moved here from Iran is that politics is a dirty business, and it can get you in trouble,” Scotten explained later. The son of an American father and Iranian mother, he grew up in Scottsdale and now lives in Las Cruces, New Mexico. Whenever he returns home to visit his parents these days, he does a little canvassing on the side.

“It's not surprising because, in Iran, there’s a lot of risk involved if you're going to become politically active, whether you’re running for office or just becoming a political activist.”

Plus, he added, “With new immigrants, they just want to keep their head down.”

Iranians are relatively new to the United States — most arrived after the 1979 revolution — but they’re one of wealthiest, most well-educated immigrant groups in the country.

That represents a lot of untapped political potential. Scotten estimates that there are roughly 10,000 Iranian-Americans in Arizona, split between Phoenix and Tucson. (Exact numbers are hard to come by, because many Iranian-Americans only mark themselves as Caucasian on the U.S. Census.)

“My long-term goal is for our community to be a community that representatives will think of when they're casting their vote,” he said. “Right now, that’s not really the case. When you see something like the Muslim ban coming up, or even sanctions against Iran, I don’t think that the representatives who cast their votes were thinking, ‘How will this impact me politically, from the standpoint of Iranian-American community?’ And that's really what I'd like us to be in the long term.”

There's an inherently political nature of being a person of Iranian descent in America in 2017 — your relatives get banned from visiting the country, you live in constant fear that the two countries are going to declare war, or you’re increasingly likely to be the victim of a hate crime.  But it’s somewhat surprising that Iranian immigrants lag behind other groups when it comes to political involvement.

Or maybe it makes perfect sense.

“Any time you have a Muslim who is trying to get in any type of elected position, it’s basically guaranteed that their name is going to get dragged through the mud thoroughly,” said Imraan Siddiqi, the president of Arizona’s chapter of the Council on American-Islamic Relations. “It’s not just Arizona, it’s a national thing.”

Not all Iranians are Muslim — in fact, a survey of Iranian-Americans found that only 42 percent identified as Muslim, and 31 percent didn’t consider themselves to be religious at all. But when it comes to right-wing mudslinging, those kinds of distinctions don’t matter. (Just ask Barack Obama.)

As Scotten put it, “I'm not a practicing Muslim, and my mom is not really religious, but she's still going to be treated as Muslim because of the way she looks and where she comes from.”

Trump’s Muslim ban was the perfect illustration of that sentiment — it attempted to bar anyone with Iranian citizenship from entering the country, regardless of their individual religious beliefs. And it seems to have finally pushed more Iranian-Americans to get involved in politics.

“I think it was a wake-up call,” Scotten says. “Even you don’t consider yourself a Muslim — you're going to be put into that category by the government, and you and your family are going to be discriminated against because of that.”

It may also have shifted the community's allegiances even further left. If U.S.-Iran relations weren’t so politicized, Iranian-Americans would probably be evenly split between Democrats and Republicans, Scotten predicts.

“I’m sure there are a lot of Republican Iranians, just because there are so many people who are successful in business, and people who are in business just tend to be more conservative,” he said. “But it's been the Democrats who have been supportive of engagement with Iran's resolution to the nuclear conflict, whereas the Republican party has been extremely opposed to that.”

The challenge that Scotten and the National Iranian American Council now face is getting lawmakers to notice a small (but wealthy) immigrant group. 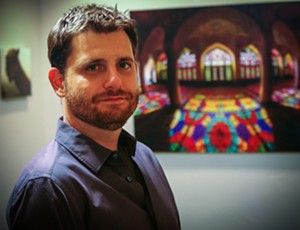 Ali Scotten, the president of Arizona's chapter of the National Iranian American Council.
Courtesy of Ali Scotten
That way, he adds, “When they’re considering a vote that could impact our community, they're going to think about us a voting bloc — as opposed to now, when they probably don’t even consider us.”

The sad irony is that organizations with a very different agenda may end up doing some of that work for them. Islamist Watch, a website sponsored by the right-wing Middle East Forum, already tracks political donations from people who are associated with Muslim organizations like CAIR.

“It's basically a way of disenfranchising the American Muslim community,” Imraan Siddiqi of CAIR explained. “It has a chilling effect on them getting involved in the political process, and becoming a donor. They're basically trying to chill candidates towards from taking money from Muslims as well. It's a really, really nefarious process.”

This obsession with accusing Muslims (or people perceived to be Muslims) of supporting terrorism may explain  why there are so few people of Middle Eastern descent in elected office. While it’s possible that we’re overlooking someone who’s on a school board in, say, La Paz County, the only high-profile example that comes to mind in Arizona is state representative Athena Salman, who is half Palestinian.

Another reason is cultural. “Iranian parents want their kid to be a doctor or an engineer,” Scotten pointed out. “In Iran, people who are involved in politics, they're all considered to be corrupt.”

But it’s not just Iranians who are underrepresented in state politics. You don’t see too many candidates who are Somali or Iraqi or Syrian or Indian or Pakistani either — even though all those communities are thriving in the Phoenix area.

And if there was any question about why this is the case, well, consider the fact that white supremacists started harassing the owners of Pomegranate Cafe after they hosted a meet-and-greet with Deedra Abboud — a white, Arkansas-born, long-shot challenger to Senator Jeff Flake. She also happens to be a Muslim.

“I know of situations where people have run for school board, for example, and the word terrorism and their affiliations with Muslim organizations has affected their chances,” Siddiqi said. “It's a sad situation, and I think it has a trickle-down effect because it's part of the calculus when people are talking about running — that they’re going to be subject to this sort of smear campaign.”

Still, he said, “People are much more empowered now than they were in previous years. Post-9/11, the overarching attitude was to stick your head in the sand and not stick out politically. I think that now a lot of people are seeing that you're not going to just ride this out for the next four years, and expect everything just to be peachy after that. You're going to have to get your hands dirty a little bit.