Screenshot/YouTube
If far-right Reddit subforums could design their ideal political candidate, it would probably look something like Craig Brittain.

Brittain — whose tagline is “Great America Wins!” — launched his campaign for Jeff Flake’s Senate seat in September. A self-described anarcho-capitalist, he’s running on a platform that includes decriminalizing marijuana and ending all taxation.

In an interview with Phoenix New Times, which was conducted over text message at his request, Brittain said that he’d do more to advance President Donald Trump’s agenda than current front-runner Kelli Ward.

He also claimed to have worked for Ward between 2015 to 2016, helping to design campaign outreach and ground strategy for her previous Senate run against John McCain.

“When I joined, her campaign was drawing a few hundred new voters per day, I helped scale that to thousands,” he wrote.

“When she began replacing members of her local campaign with DC insiders, her numbers slumped and she wound up throwing away what would have been an easy win.”

However, according to Zachery Henry, Ward’s current press aide, Brittain’s involvement with the campaign was limited to two days in 2016, when he volunteered at a gun show.

On Twitter, Brittain frequently posts digs at Ward, claiming that she’s paying off the media so that they won’t cover his campaign.

When asked to provide evidence of this, Brittain responded that Ward “is endorsed by Sean Hannity and Laura Ingraham, both who previously followed me on Twitter. They now refuse my communications and attempts for dialogue.”

He went on: “The direct evidence is that Michelle Moons is supposed to be a neutral journalist for Breitbart, but the Ward campaign pays her a salary. Knowing that Ward pays Moons — it makes sense if she is paying off the other outlets and journalists for their support, especially with Ward receiving $300k from Robert and Rebekah Mercer.”

While it’s true that hedge fund billionaire Robert Mercer has committed $300,000 to a super PAC backing Ward, her campaign flatly denies paying any news outlets in exchange for coverage (which, to be clear, is an arrangement that no self-respecting media outlet would ever agree to).

Moons could not be reached for comment as of press time, but we’ll update this post when she does.

Nonetheless, Brittain is insistent: “The lack of coverage of our campaign is proof. There is tons of talk about candidates who aren’t even running but no coverage of our great campaign.” 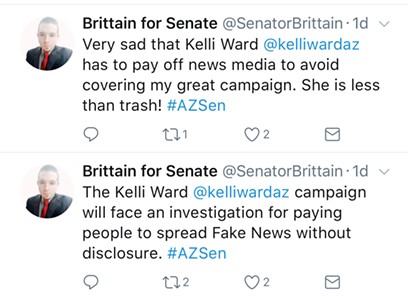 Resnik replied to him with a link to the FTC’s complaint. “Hey sunshine: This might be a problem,” he wrote.

“The allegation is fake news and my supporters don’t care,” he replied on Twitter, later adding, “The FTC, an unconstitutional far-left partisan organization, is one of many 3-letter groups I will abolish as US Senator.”

For good measure, he accused Senate candidate Deedra Abboud (a recent guest on Sunday Square Off, which Resnik hosts) of being a “terrorist-sponsor,” and finally told Resnik, “The people want to talk policy/issues, not your fabricated, partisan Deep State claims.”

Why, New Times asked, does he want to be featured in the same media outlets that he’s deemed to be fake news?

“Because my presence in the story as a journalist allows me to correct the mistakes,” he responded. “It is the same reason real news reports on fake news — so great writers can fix the work of hacks.”

Among the many things that Brittain dismisses as fake news are a set of screenshots that purportedly show him telling a woman, “Your worthless womanlife has no fucking value […] Men work so fucking hard just to have you shoot us down with your bullshit. Meanwhile you act like a cunt and because you have a cunt people still like you.”

“The Facebook allegation is false, those messages were sent by an impersonator and the account was suspended by Facebook,” he wrote in a text message, adding that he'd posted a screenshot on his campaign Facebook page for proof.

Asked why someone would want to impersonate him, he replied, “As a journalist, writer, election influencer and now candidate, I have many enemies.”

Back in March, Mic published another set of screenshots that show someone by the name of Craig R. Brittain telling a venture capitalist, “You need to respect and to learn to listen, especially to racially superior people.”

“That was also the impersonator,” Brittain told us. “The impersonator has been making fake accounts in my name since at least 2013. I have lengthy documentation that shows this person has gone to great lengths to impersonate me.”

When asked if he would be willing to share that documentation, he replied, “I have more evidence of the many many fake accounts being created which I may release, but I honestly don’t see it as being critical, people do this to celebrities.” 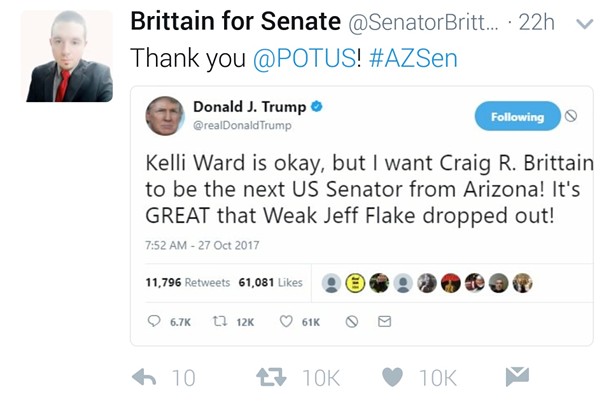 A fake endorsement from President Donald Trump appears on Craig Brittain's Twitter feed. Brittain describes it as a "parody."
Screenshot/Twitter
That "endorsement" is nowhere to be found on Trump’s Twitter feed, however.

“One of my staffers posted that as a joke,” Brittain said. “Most people got it and thought it was pretty funny, but outrage warriors online tried to spin it.”

Then, on Monday, Brittain announced on Twitter that a new poll showed him in the lead among GOP candidates in Arizona’s 2018 Senate race. 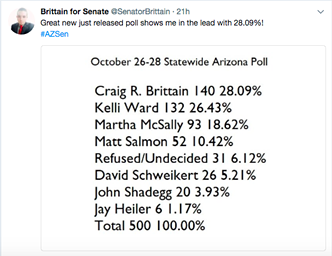 Screenshot/Twitter
Look familiar? That’s because these “results” are almost identical to the results of a DataOrbital poll that was released the day before — and which didn’t include Brittain. 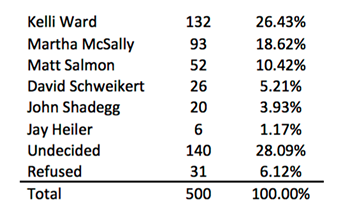 Screenshot/Data Orbital
Brittain claims to have received the support of 28.09 percent of voters — the same share that DataOrbital reported were undecided.

“That is based on my belief that all undecided voters in polls that omit my name are voting for me,” he said. “They aren’t undecided, they want to pick my name but it isn’t on these broken polls. Every undecided is really voting for me.”

And as for this story that you’re currently reading, it’s also fake news, according to Brittain.