Tim Jeffries, who filed a $5.1 million claim against the state, now says he may challenge the man who fired him, Governor Doug Ducey Deanna Dent
Governor Doug Ducey forced Tim Jeffries to resign from one of Arizona's top state agencies last year, and now Jeffries is considering a bid to replace Ducey as governor in 2018.

"I am thinking about it, I'm praying about it," said Jeffries, responding to a rumor of his possible run that was sent by email on Wednesday to local reporters. "I've heard from 1,700-1,800 of my former employees. People say, 'please run for governor so you can fix DES again.'"

Ducey picked the retired businessman to lead the Arizona Department of Economic Security in 2015, but apparently grew tired of the negative headlines that Jeffries periodically provoked, and forced him out last November.

Jeffries' unusual personality made waves as director, and he built up a following of supporters as well as a rash of critics. As the Phoenix New Times first reported in 2015, Jeffries' "same-day exit" program involved the termination of hundreds of employees, including some who had stellar work records. He ordered yellow smiley faces on security-officer uniforms and bollards outside of DES offices, and put his Catholic sentiments into official documents and emails. Jeffries claims the agency of nearly 8,000 employees ran more efficiently under his reign. 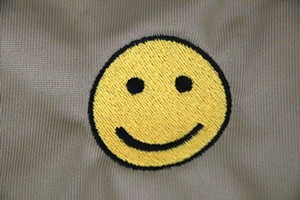 Would a yellow smiley face become the new state mascot if Jeffries were elected governor?
DES
Just before his ouster in late 2016, Jeffries reportedly bought alcohol for employees on state time, but the accusation was never proven. He also received criticism for building up a cache of guns and ammunition at the office for an internal security force, but as an August New Times article covered, much of the criticism was overblown. Jeffries filed a $5.1 million libel claim against the state following an audit of the security program; his former chief of security, Charles Loftus, filed a $2.6 million claim. Both claims are still pending.

Jeffries said he will likely decide by late next month whether to throw his hat into the 2018 race. He's not sure whether he would run as an Independent or a Republican, he said.

Arizona's GOP leadership, including Ducey and U.S. Senator John McCain, was "central" to the GOP's failure to repeal and replace the Affordable Care Act in Congress this year, which has soured him somewhat on the party, he said.

Calling President Trump a "mixed bag" who "has done some good things," he lambasted Ducey for not having the "spine" to stand with Trump at the August rally in Phoenix. He also said that Trump is probably "less than pleased Ducey did not deliver Senator McCain's vote on health care."

Jeffries said he would not just focus on DES issues if he became governor, but would take Ducey's intent to run government "at the speed of business" to a new level. His impression of government work during his nearly two years as DES director led him to believe it was more "bloated and inefficient" than he had ever imagined.

"I am certain government needs a massive restructuring and reallocation of resources to reinvest in certain areas of the state," he said. "In my opinion, 2-3 percent of the general fund can be repurposed to invest in critical areas of need."

Ducey, a Republican, hopes voters return him to office in 2018. So far, no Republican or Independent has formally announced a challenge to Ducey for the 2018 election.