The Best New Restaurants of 2017 Soy-cured watermelon at Restaurant Progress. Jackie Mercandetti
We saw fewer big-name restaurant openings this year in metro Phoenix than we did last year. But in many respects, 2017 was a good year for the Phoenix dining scene. We saw the continued resurgence of strong, chef-driven neighborhood spots. We witnessed bold new iterations of regional Chinese and Thai cooking. We saw a first-rate taquería and an Italian gem bring culinary cachet to the northwest Valley. We even spotted a bonafide Food Network personality pop up in our midst. Nope, 2017 was not a bad year. And if this list only has eight names on it, chalk it up to a flurry of delayed restaurant openings, and a desire to not waste your time and money with anything that might resemble a lukewarm recommendation. In no particular order, here are eight new restaurants that are making metro Phoenix a more interesting place to eat and drink. Pork belly with garlic sauce at Original Cusine.
Jackie Mercandetti
Original Cuisine
Original Cuisine is not a perfect restaurant — service can be spotty, and something as seemingly innocuous as too-small tabletops can put a damper on group dinners. But Original Cuisine’s vast catalog of noodle dishes, pan-fried specialties, stews, and veggie plates represents a big forward leap for contemporary Sichuan-Chinese cooking in the Valley. The restaurant’s signature pork belly starter, featuring long, pounded-thin sheets of ultra-rich meat, draped over a wooden rack and layered with paper-thin slices of cucumber, is both visually dramatic and exquisite. Many of the restaurant’s most memorable dishes are also elegant and simple: a bowl of wood-eared mushrooms, dressed in lemon, are only slightly less addictive than the restaurant’s fantastic, chile-sluiced pig ears. (1853 West Broadway Road, Mesa, 480-255-7810) The interior of Restaurant Progress has a sleek, modern design.
Jackie Mercandetti
Restaurant Progress
This intimate, 37-seat Melrose neighborhood spot is a small oasis of modern American auteur cooking, or more specifically, the cooking of chef-owner TJ Culp, whose latest culinary riffs and obsessions are writ across the restaurant’s always-evolving, seasonally influenced menus. You can chart the chef’s obsession with balance, flavor, and texture in something like a dish of crudo — I’ve tasted several iterations of Culp’s crudo this year, and it’s consistently yielded a remarkable pastiche of sweet, sour, bitter, and salty flavor. The restaurant’s cozy and vintage-style dining room, buoyed by barman Jason Dominguez’s strong cocktail menu, makes Restaurant Progress one of the most appealing new neighborhood restaurants to open this year. (702 West Montecito Avenue, 602-441-0553) Fabio on Fire's pizza
Jacob Tyler Dunn
Fabio On Fire
Fabio on Fire sounds like it could be a sultry romance novel, but it’s something far more attractive: a first-rate pizzeria, Italian restaurant, and bakery, nestled inside the corner space of a Peoria strip mall. Northern Italian-born chef-owner Fabio Ceschetti wields the wood-fired Italian oven with grace, delivering thin, Neapolitan-inspired pies that are floppy in all the right ways, with gorgeously crispy-chewy edges. The Capricciosa is befitting of its moniker (broadly translated, it means something like “spoiled princess”), a pie dappled with veggies, slips of prosciutto, and redolent with the flavor of San Marzano tomatoes and olive oil. Pasta highlights include a simple yet wonderful lasagna and tagliattele Bolognese. Don’t miss the house-made bread and bakery counter, which is filled with a lovely selection of Italian cookies and desserts like an airy, creamy diplomatico puff pastry. (8275 West Lake Pleasant Parkway, #101, Peoria, 623-680-5385) 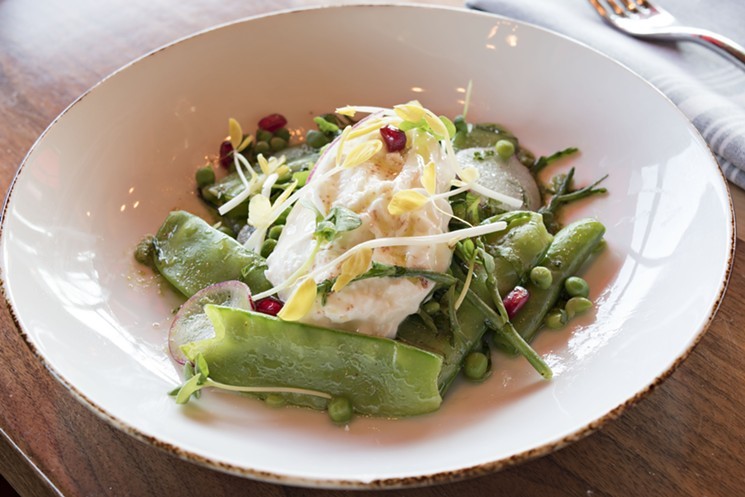 Burrata and pea salad from Mora Italian
Jackie Mercandetti
Mora Italian
Mora Italian, a splashy new uptown restaurant and bar from chef Scott Conant (a regular judge on Food Network mainstay Chopped) and restaurateur Stefano Fabbri, was arguably the biggest restaurant opening of the year. The stylish and high-energy osteria gives you plenty to look at — the large space features lofty, industrial ceilings; cheeky Italian pop wall art; long, red tufted banquettes; and a sleek outdoor patio and bar. But the real show-stopper is the restaurant’s sprawling menu of casual yet refined modern Italian cooking. It’s worth suspending any carb prejudices for starters like the focaccia di recco — the olive oil-scented scraps of focaccia are pasted together with stracchino cheese and deliciously enlivened with sprinklings of sea salt. Fresh pasta standouts include the duck cavatelli: slightly chewy, well-sealed bundles of pasta, served with succulent hunks of duck. (5651 North Seventh Street, 602-795-9943) Burger from The Dressing Room
Jacob Tyler Dunn
The Dressing Room
The Dressing Room is a new Roosevelt Row restaurant that successfully avoids coming off like a neighborhood interloper. The roughly 500-square-foot restaurant has a storied past — its name pays tribute to the building’s history as one of Phoenix’s first drag bars — and its well-worn brick walls and scratched-up cement floors have been artfully preserved. The main draw, though, is the unabashedly casual and globally inflected menu, described collectively as “food from streets, beaches, carts, and trucks.” That means a winning menu of burgers, tacos, salads, and snacks like Korean yakitori, executed with some serious culinary panache. Veggie tacos, usually the least exciting taco in the house, feature a gorgeous clump of deep-fried queso Oaxaca, dressed up with sweet potato and Peruvian corn. The restaurant’s signature dessert, a freshly fried churro ice cream sandwich, is reason enough to stop by for dinner. (220 East Roosevelt Street, 602-777-0763) Tacos Calafia is on the west side of town as well tucked in a shopping center.
Jacob Tyler Dunn
Tacos Calafia
Adolfo Torres Jr., formerly of the beloved food truck Tacos Tijuana, has struck out on his own with a new Peoria brick-and-mortar taquería, Tacos Calafia (the name, if you’re wondering, pays homage to Tijuana’s iconic public microbuses). For the most part, the family recipes have been left deliciously intact at this friendly, counter-service Mexican restaurant, which offers a small but indispensable menu of tacos, quesadillas, and street snacks. It’s well worth driving from all corners of the Valley for the restaurant’s al pastor — try it in the al pastor mulita, two freshly pressed corn tortillas stuffed with gently charred slivers of chile-sluiced pork, dabbed with some of the restaurant’s ultra-fresh guacamole salsa and oozing melted cheese. And carne asada, chopped to smithereens and gorgeously charred, doesn’t get much more ambrosial than the rendition you’ll find here. (8258 West Thunderbird Road, Peoria, 623-312-6358)