Andria Bunnell & Las Chollas Peligrosas won the 2018 music artist award. Nader Abushhab/NBMA Photography
This post was updated at 1:45 p.m. on Friday, August 23, to include a new call for artist entries (see below).

Phoenix Center for the Arts has put out the call for nominations for this year’s Mayor’s Arts Awards, which will recognize Phoenix creatives in nine categories. The center presents the awards each year in partnership with  the Phoenix Mayor’s Office.

“We’re hoping people will spread the word far and wide,” says Lauren Henschen, who was recently named CEO for Phoenix Center for the Arts. “We had 220 nominees last year, and we want to blow that number out of the water this year.”

Anyone can nominate a Phoenix creative for an award, and artists are also free to self-nominate. Organizers are looking for artists whose work is innovative and collaborative, and having a positive impact on the community. Eight categories recognize individuals. Another highlights work by innovative organizations.

Joy Young won the literary artist award in 2018.
Joy Young
The nomination form is available online. To nominate an artist, you’ll need to provide the artist’s name and email, as well as your own. Then you’ll have up to 100 words to describe why you’re nominating the artist. Nominations are due on Wednesday, July 31.

Nominees will be invited to submit details about their work in August. A committee comprising last year’s award winners and representatives from Mayor Kate Gallego’s office will choose finalists in each category.

Winners will be announced during the Phoenix Mayor’s Arts Awards ceremony on Thursday, October 10, at Margaret T. Hance Park.

Organizers are encouraging nominations for emerging creatives, and early- to mid-career artists. This year, there’s a new category for DIY creatives and makers. The suggestion for the new category came from artists involved with last year’s event, Henschen says. 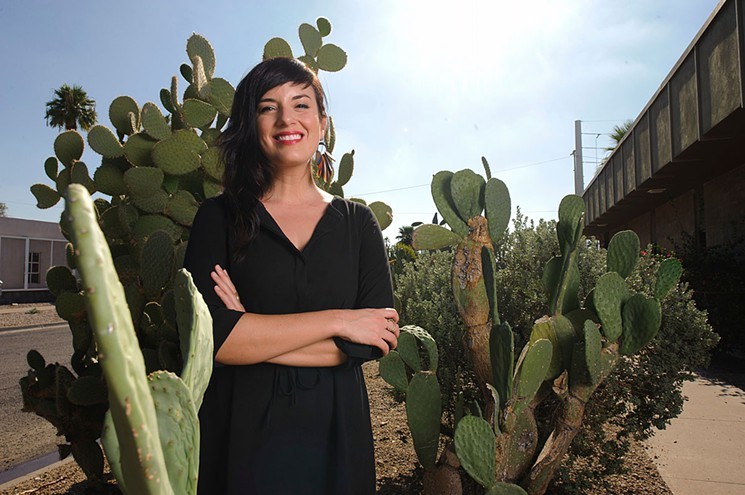 Casandra Hernández Faham heads CALA Alliance, which won the innovative organization award in 2018.
Pablo Robles
The 2019 Mayor’s Arts Award categories are:
Henschen hopes for a robust response to the call for nominations, which helps to assure that the awards reflect the breadth and depth of Phoenix arts and culture. “The more nominations we get,” she says, “the greater representation we get of the entire community and the work being done.”

Update: Phoenix Center for the Arts has opened a second round for nominations. Artists can who want to be considered for a 2019 Phoenix Mayor's Arts Award can apply through 5 p.m. on Friday, August 30.
KEEP PHOENIX NEW TIMES FREE... Since we started Phoenix New Times, it has been defined as the free, independent voice of Phoenix, and we'd like to keep it that way. With local media under siege, it's more important than ever for us to rally support behind funding our local journalism. You can help by participating in our "I Support" program, allowing us to keep offering readers access to our incisive coverage of local news, food and culture with no paywalls.
Make a one-time donation today for as little as $1.