Canto’s cosplay typically involves puns and combines geeky characters or pop-culture icons into creative and clever outfits that tend to get a lot of attention.

That’s especially true of his latest mashup costume, a hybrid of the Mandalorian from the show of the same name and the Back to the Future’s DeLorean time machine, which went viral on social media after Canto wore it to Pittsburgh’s Steel City Con in early April.

Photos of his costume — which feature elements like a flux capacitor and time circuits grafted onto the silver Mandalorian armor of Din Djarin — got more than 63,000 upvotes on Reddit and even made the site’s front page. Canto’s creation also got hundreds of Facebook shares.

Canto, who lived in the Valley for several years before moving to Pittsburgh last fall, told Phoenix New Times he was “blown away” by the response.

“People were really amused by it,” he says. “I've done a lot of mashups, a lot of puns, but I think this was one where people got [the joke] very quickly. It helps that Star Wars and Back to the Future are both very popular franchises and have been for a long time.”

Canto has been creating mashup cosplay since the mid-2010s. He’s been inspired by everything from the “Before and After” category on Jeopardy! (which combines two different words into a single phrase) to the work of cosplayer Olivia “AvantGeek” Mears who created a "Taco Belle" costume in 2015 that mashed up the Beauty and the Beast heroine with the fast-food chain’s aesthetic.

Canto says he enjoys blending two different characters or things and creating a costume greater than the sum of its parts.

“There have been times where I've thought, ‘If I can stick these two things together,’ then I could pick and choose elements that I liked, rather than being beholden to getting everything about one thing or character completely accurate,” he says. “So it’s become less about the accuracy but more about the art of building the costumes.” 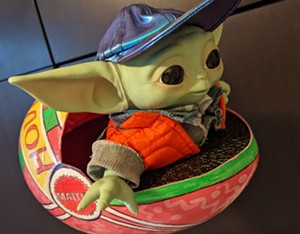 Alex Canto's Marty McGrogu prop.
Smart Alex Cosplay
Canto came up with the idea for the “Man-DeLorean” costume more than a year ago while he was still living in Phoenix, but didn’t start creating it until mid-March. And, according to Canto, Back to the Future actor Christopher Lloyd was the catalyst for finally making it a reality.

“I’d seen the news that he was cast in season three of The Mandalorian and was also going to be a guest at Steel City Con,” Canto says, “So I thought, ‘If I'm ever going to do this, I'd better do it now.’”

And since he only had three weeks to do it, Canto went into hyperdrive to create the costume in time.

He created the Mandalorian armor out of Sintra thermoplastic using plans off the internet and incorporating elements from the DeLorean and Back to the Future. A USB-powered flux capacitor toy was installed in one of the chest plates while time circuits were built into one of the vambraces on his forearm. Canto’s sister 3D-printed a pair of articulated gull-wing doors for his helmet.

And since every DeLorean needs a Marty McFly, Canto dressed up a Grogu doll as the teenage character from Back to the Future.

“He's sitting in a [floating pram] made from a giant plastic Easter egg that’s attached to my belt with clear acrylic. My wife painted it the same shade of neon pink as Marty's hoverboard,” Canto says. “I really like how it turned out.” Alex Canto (left) with Christopher Lloyd (right).
Smart Alex Cosplay
He’s not the only one. Canto debuted the “Man-DeLorean” on April 8 during the first day of Steel City Con and he says people at the event “found it amusing.” Christopher Lloyd seemed to barely notice it during his photo op with the cosplayer, though.

“When someone asked him to look up for our picture together, he raised his head and was startled,” Canto says. “He had a ‘look at this guy’ expression, but didn't have much to say because he seemed very focused on getting everyone their autograph or moment of attention.”

After another con attendee posted a photo of the costume on Reddit the following day, Canto got all the positive feedback he could ever want.

"As I was at the convention center, I started getting all these text messages and Facebook messages. I called my wife and she was reading me all these comments from the Reddit thread, which were overwhelmingly positive,” Canto says. “And it seems like I've been posted to every Back to the Future or Star Wars [Facebook] group or page since then.”

Canto will return to the Valley for this year’s Phoenix Fan Fusion in late May and will be wearing the “Man-DeLorean” costume during the three-day event.

“It was my hometown con for years and I wouldn’t miss it,” he says. “My flight's booked and I’m going to wear [the costume] for at least one or two of the days.”

This is the way.

Phoenix Fan Fusion 2022 is scheduled to take place from Friday, May 27, to Sunday, May 29, at the Phoenix Convention Center. Hours vary. Daily admission is currently $40 to $55 and a full membership is $90.
KEEP PHOENIX NEW TIMES FREE... Since we started Phoenix New Times, it has been defined as the free, independent voice of Phoenix, and we'd like to keep it that way. With local media under siege, it's more important than ever for us to rally support behind funding our local journalism. You can help by participating in our "I Support" program, allowing us to keep offering readers access to our incisive coverage of local news, food and culture with no paywalls.
Make a one-time donation today for as little as $1.