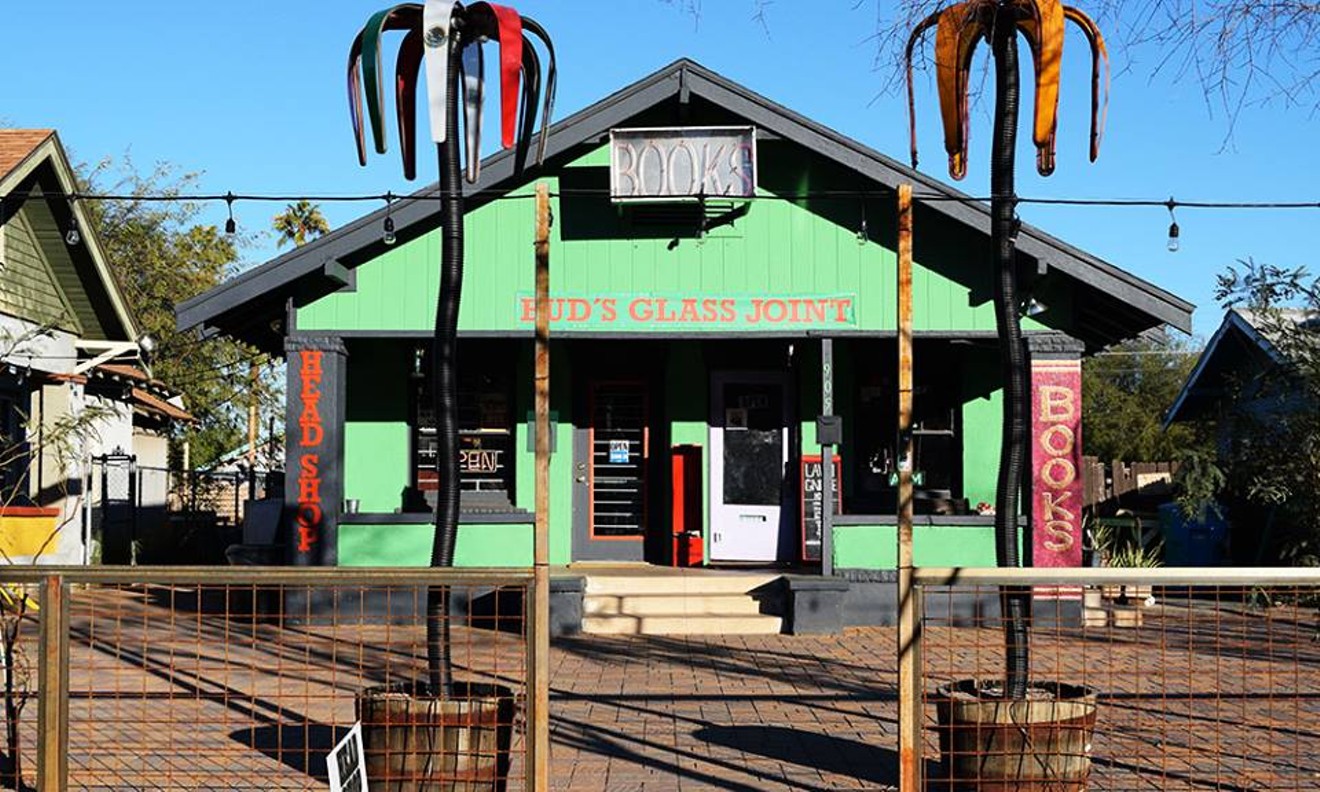 Lawn Gnome Publishing is shuttering. Aaron Hopkins-Johnson
On April 21, Lawn Gnome bookstore owner Aaron Hopkins-Johnson posted a message on Facebook declaring his intention to shut the store and performance venue down at the end of the month. That closure will be the latest in a long line of independent Fifth Street businesses that have shuttered as the Roosevelt Row neighborhood undergoes gentrification.

In a long message paying tribute to the many artists and local community members who volunteered and performed at Lawn Gnome, Hopkins-Johnson writes, "It was my life's mission to make Lawn Gnome a place where free speech on paper and on a stage could work as a means of promoting discourse in Phoenix and as a model across the country."

Founded almost six years ago by the slam poet and author, Lawn Gnome sold books and home goods like soaps and candles, and provided a backyard stage for open mics and concerts. After years of working on Roosevelt Row, Hopkins-Johnson says that he's shutting down the store "so I can maintain performance at my job at Fasturtle as Director of Social Media spend quality time with my family."

While he plans to continue selling Lawn Gnome goods and publications through the Lawn Gnome Publishing website, he has no plans to reopen or relocate to a new physical location in the near future.

Hopkins-Johnson tells New Times there were other factors spurring Lawn Gnome’s closure. The poet and business owner  the gentrification of the neighborhood made it harder for his business to thrive. “The Blocks has definitely ruined the walkability of the neighborhood,” he says.
.
Hopkins-Johnson is referring to The Blocks of Roosevelt Row development, which has been slowly transforming the face of Fifth Street.

According to Hopkins-Johnson, the Blocks developers have not been keen on cooperating with the locals.

“They co-opted a free mural, but won’t even communicate with the bookstore that they are crushing with a chainlink fence and jackhammers?” he says. "They got me surrounded."

The development has bought up property previously home to most of Lawn Gnome's neighbors, including Growhouse, The Longhouse, Think!, Flowers, and the 909 housing collective. While construction hasn't begun near Lawn Gnome yet, chainlink fences and development has already begun on nearby properties.

“I encourage development. Progress is good," Hopkins-Johnson says. "But I wish that someone could have been more sensitive to the fragility of the arts community and worked to organically integrate themselves into the neighborhood."

Niels Kreipke, a representative from Desert Viking, says that they were unaware that there was any communication breakdown happening between them and Lawn Gnome Publishing.

"This is the first we are hearing of any concerns from our neighbor regarding communication," says. "From the onset of the project, we have made it a point to regularly attend the Evans Churchill Community Associations to provide our neighbors with updates and to answer any questions or concerns they might have in an open forum. Outside of those meetings, we have been in direct communication with the landlord of the Lawn Gnome Publishing building and no issues have been brought to our attention."

Hopkins-Johnson doesn't own the building Lawn Gnome is housed in. He shares a landlord with next-door business Bud's Glass Joint. He remains unimpressed with Desert Viking's community outreach efforts.

"I shouldn’t have to go to a community development meeting at 5 p.m. on a Monday to read blueprints and timetables that are going to be changed anyway," Hopkins-Johnson says.

The closure of Lawn Gnome is another significant loss for Fifth Street's culture. Aside from the Lost Leaf, it was the only other performance venue left on the Row. Filling the open mic void left by the closures of Conspire and Aside of Heart, Lawn Gnome became the for several weekly open mics, in addition to hosting live music and touring poets and authors.

Lawn Gnome served as a hub for Phoenix’s growing storytelling community. Dan Hull, one of the brains behind the Storyline series, started a weekly storytelling open mic called Yarnball at Lawn Gnome in 2012. The Yarnball series helped develop a critical mass of storytellers in the Valley, spurring the creation of several other storytelling series like Chatterbox, The Whole Story, and Then It Got Weird.

Hopkins-Johnson, who made his bones as a performer by touring and competing as a slam poet, also hosted poetry slams at the venue. Using his connections in the poetry world, he published work by esteemed writers like Jesse Parent and Michael C. and brought in famous writers like Saul Williams to do riveting sets on the Lawn Gnome stage.

In addition to being a place for spoken word and comedy to flourish, Lawn Gnome was also a performance space for local bands and touring acts to play. Whether it was local heroes like Playboy Manbaby and The Haymarket or touring artists like The Slow Poisoner and Hawkwind, the wooden backyard stage filled the open air of Fifth Street with music.

With Lawn Gnome on the way out and no other new performance venues on Fifth Street looking to take its place anytime soon, it seems that the Valley’s creative community has even less of a foothold now in the area that was once considered its beating heart.

Anyone looking to trod the boards at Lawn Gnome before it shutters will have a few more chances. Hopkins-Johnson announced that the store will host a final Phoenix Poetry Slam on Thursday, April 27, and the venue’s final night of performances will be on Friday, May 5.

After that, Hopkins-Johnson said he plans to continue Lawn Gnome as an online presence. Chapbooks, zines, and other products made at Lawn Gnome will continue to be available online. He’s also stated his intention to do pop-up live events at different venues across town.

"This is not the end of Lawn Gnome Publishing," Hopkins-Johnson says. "This is the beginning of a new chapter, gnome sayin'?"