As Demolition Continues on Paradise Valley Mall, Its Architect Reminisces About Its Creation


The chatter in the “Paradise Valley Mall 80s and 90s” Facebook group tends to be of a nostalgic nature.
The 5,800 members like to talk about the stores they worked in, post pictures of old movie tickets and newspaper ads, and generally reminisce about the shopping center that was a social and commercial hub for decades.

“I bought my prom shoes at Dillard’s,” one group member commented on a post about the closing of the department store. “22 years ago today I met my husband while he was working at Things Remembered in PV mall!” someone posted back in May. “So sad to see part of our childhood disappear,” another member commented. It’s a sentiment that’s seen frequently in group posts.

Rafique Islam in 1978.
Rafique Islam
The love for PV Mall is particularly gratifying to one member of the group: its architect, Rafique Islam of Mesa.

“It’s beyond my imagination,” he says. “I haven’t seen anybody say anything bad about it. Everybody loves it.”


PV Mall has been in the spotlight a lot this year: in February, when the Phoenix City Council approved the rezoning request that would allow for the mall to be mostly torn down and redeveloped into a mixed-use property; in March, when the mall officially closed; and in July, when demolition began on the shopping center that had stood there for more than 40 years.

Islam, now 71, was just 27 when he was picked to design what was initially called Paradise Village Mall. Born in Darjeeling, India, he moved to Bangladesh as a child. He attended architecture schools in Turkey and Norway, then moved to Texas in 1973 after visiting his brother there. He joined a firm called Architectonics that specialized in designing shopping malls. He did some work on Mesa’s Fiesta Mall, designed a junior college in Dallas, moved to L.A. for a while, then ended up in Phoenix in 1977 when the company opened up an office here.

Islam remembers the day he traveled to the office of Russ “Rusty” Lyon, founder of Westcor, the real estate development company responsible for many of the malls around metro Phoenix. Westcor needed a design for a new shopping center at the corner of Cactus Road and Tatum Boulevard in north Phoenix. Architectonics told Islam that if he took the project, he’d be responsible for everything, from the design of the building to the creation of the logo and the promotional materials.

“When you’re young, you don’t know what you’re getting into,” Islam recalls. “So I said okay.” 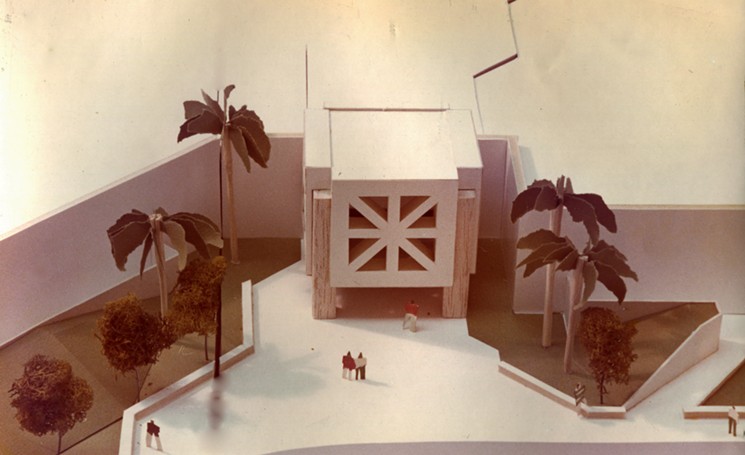 A model of the proposed Paradise Valley Mall
Rafique Islam
Islam spent the rest of 1977 designing the mall, and from the beginning, it was clear that PV wasn’t going to be your typical shopping center.

“We set out the theme of the mall, and the mall starts with the entrance,” Islam says. “So we have to design an entrance that can be visible and identifiable in the daytime as well as at night. And it also has to be able to be moved in two or three years when the mall expands. So we designed a cube.”

The iconic cube-topped entrances were a defining characteristic of PV Mall, but so too was the Southwestern-inspired decor. Lyon, an avid collector of Native American art, wanted the shopping center to be rooted in a sense of place.

“Most malls, they’re all the same,” Islam says. “All the tenants are the same. You can’t tell where you are. [Lyon] said, ‘We need to know we’re in Phoenix.’ So how do you do that? You bring in local culture, local tradition, local art, local flavor.”

Lyon gave him a book about Navajo blankets. “He said, ‘Look at the colors, look at the designs, look at the motifs. Why do you need to be international? Why can’t we be local?’”

The Native American influence showed up in the floor designs of PV’s courts (the open space outside the anchor stores). Each court had a different tile design based on Navajo rug patterns. Terrazzo tiles from Guadalajara, Mexico, were brought in to create the floors. The step-pattern columns also echoed Native American thunderbird designs. 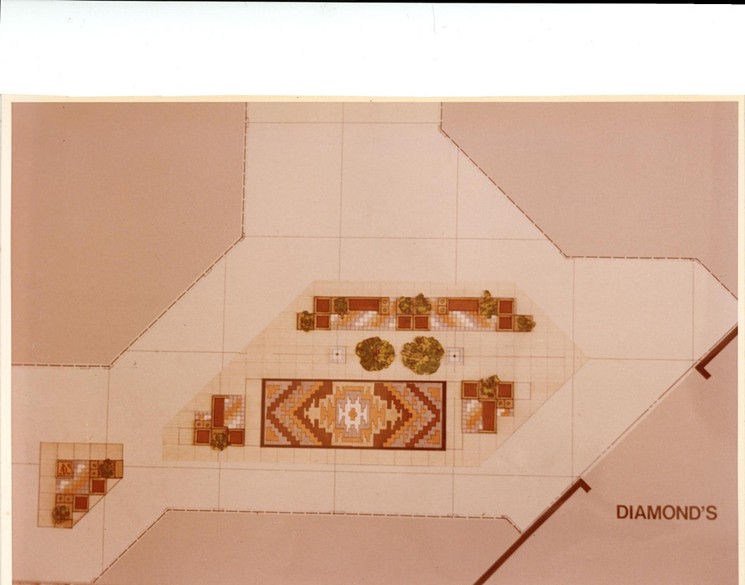 The plan for the Diamond's court, including the Native American tile design.
Rafique Islam
The design was complete by May 1977, at which point Architectonics had to get the approval of the partners and to future anchor stores Dayton-Hudson (which was responsible for Diamond’s department store) and Sears. By mid-June, the mall was a go. Islam actually missed most of the construction phase, which took place in 1978; he had returned to Norway to finish his master’s degree in architecture. But he was back in Phoenix by September and was present when the mall opened not long before Thanksgiving (though the official grand opening celebration wasn’t held until February 1979).

“It was unbelievable. Everything that I had put on paper had been translated into something real,” Islam says.

PV Mall was just the first project in Islam’s long architecture career in Phoenix. After it was done, he went on to design a number of famous structures around town: the Cornerstone complex at Rural Road and University Drive in Tempe, the El Pedregal shopping center in Carefree, Superstition Springs Mall in Mesa, Desert Sky Mall in west Phoenix, and Hayden Square in Tempe. After leaving Architectonics, he became a founding principal of Sixty First Place architects, where he was involved with the renovation that brought Costco to PV Mall, among many other projects.

Demolition on PV Mall began last month.
Tom Carlson
Now retired, Islam says it was a little tough for him when he heard that the wrecking ball was headed toward PV Mall. But he’s enjoyed observing the flood of memories and photos on the Facebook group. And he knows change is inevitable.

“I’m not opposed to anyone who wants to do something different,” he says. “I think everything has a time and a place. PV Mall had a good run.”
KEEP PHOENIX NEW TIMES FREE... Since we started Phoenix New Times, it has been defined as the free, independent voice of Phoenix, and we'd like to keep it that way. With local media under siege, it's more important than ever for us to rally support behind funding our local journalism. You can help by participating in our "I Support" program, allowing us to keep offering readers access to our incisive coverage of local news, food and culture with no paywalls.
Make a one-time donation today for as little as $1.