One of the themed areas is on display at the Pratt Brothers Christmas & Holiday Spectacular in Mesa. Pratt Brothers
Kris Kringle ain’t the only one making a list and checking it twice lately. This week, Sammy and Kyle Pratt have been compiling a rundown of their own, albeit one focusing on everything they’ll need to finish on their new project.

The pair have been busy putting a metaphorical bow on the Pratt Brothers Christmas & Holiday Spectacular, their three-acre yuletide attraction at Mesa’s Bell Bank Park that’s set to debut on Tuesday, November 22.

And there’s still a lot left to do, Sammy tells Phoenix New Times during a recent interview.

“We're plugging everything in right now to test it out. We're putting in the special effects, spotlights, flame [jets], and spark machines,” he says. “We’re getting everything in concert so we can fire this thing up and have it work perfectly when we open to the public.”

It’s not unlike the frantic preparations the brothers went through with the DIY holiday light display they set up annually at their family’s Scottsdale home for seven years. The stakes with the Pratt Brothers Christmas & Holiday Spectacular are significantly larger, though, as is its size.

“This is going to make what we were doing at our house look small in comparison,” Kyle says. “We’ve invested a lot more money and it's tenfold the size. It’s just massive. We're talking spotlights going into the sky, snow machines that will cover everything, fire machines shooting 16-foot flames, and a 360-degree professional audio system. It's going to be this completely immersive holiday experience."
There are also massive video screens, 30-foot-tall LED mega-trees, machines releasing festive scents (think gingerbread and spices) into the air, spots to decorate cookies or make s’mores, and a holiday "Miracle Market" with vendors that will be run by Gilbert retailer Ivy & Sage.

“Each of these lands is completely themed out, not just with lights, but with characters, scents, sounds, animation, and gags,” Kyle says. “It's a fully immersive storytelling train ride.”

They're also planning to have live music performances, costumed characters (including Santa) interacting with patrons, and appearances by local celebrities.

"We're going to have some pretty big names that will come and help light the trees and light the town, but we're keeping [their names] under wraps for now," Sammy says.

Because, of course, it wouldn't be the holidays without surprises.

Inspired by Disney and Holiday Magic

So why did the Pratt brothers go from a holiday light display at their family’s house to launching a massive commercial holiday attraction? Kyle says it’s born of a desire to do something bigger, as well as a lifelong love of Disney starting in their childhood.

“Growing up, our family trip every year was to Disneyland during the holidays and we’d spend five days to a week there,” Kyle says. “Our parents used to decorate the house like crazy, and Kyle and I took that up because we didn't want to escape the magic of Disney or Christmas. So we tried to create that feeling for others, and it just kind of grew into a monster.”

The Pratt brothers began their home display, which was known as Christmas Forever, in 2015 while dreaming of someday landing jobs with the Walt Disney Company. Naturally, they took a few cues from Disneyland for the display, including creating a mockup of the quirky clock face from “It’s A Small World.”

Christmas Forever grew exponentially over the next few years and became wildly popular. By 2020, it was 6,000 square feet in size and attracted more than 30,000 visitors. Kyle and Sammy’s Disney dreams never panned out, though, so they started planning another move: creating their own attraction.

“We had to modify our dreams a little,” Kyle says.

After keeping their home display up for one final run last year (during which the display was filmed for an upcoming episode of ABC’s The Great Christmas Light Fight), they pulled the plug and began planning the Pratt Brothers Christmas & Holiday Spectacular.
click to enlarge 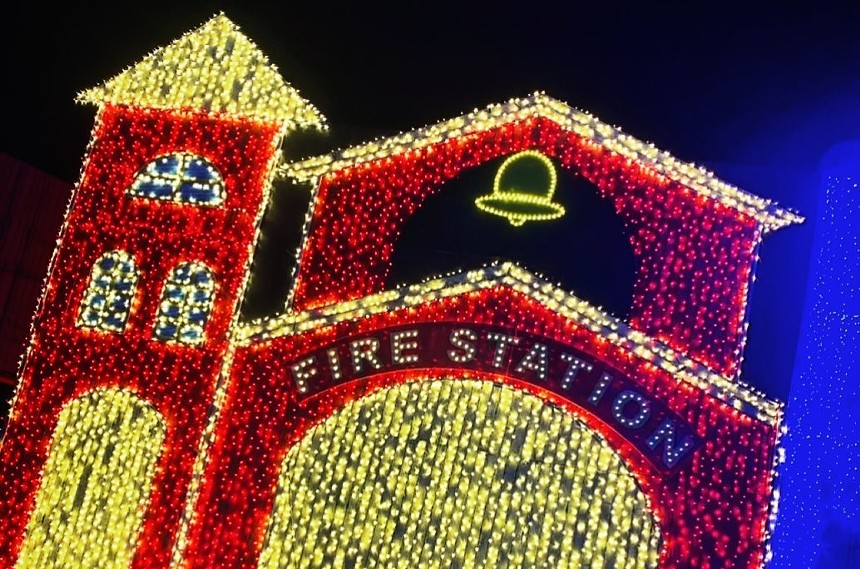 One of dozens of illuminated facades is featured at the Pratt Brothers Christmas & Holiday Spectacular in Mesa.
Pratt Brothers

Earlier this year, the Pratts were approached by R Entertainment, a Scottsdale-based event developer and promoter, to back the project. The brothers then began designing the attraction and hiring creative staff. They even consulted with former Disney artists and “Imagineers.”

“They really know their stuff and helped us in terms of figuring out spacing, color, design, sense, and fabrication,” Kyle says. “They definitely had a hand in this project.”

Even then, he doesn’t want to think of this creation as their own personal version of Disneyland.

“Is this going to be our theme park? No,” Kyle says, “But could we wind up creating something like an actual theme park 10 years from now? Who knows.”

In the meantime, the Pratt brothers will be busy encouraging Valley residents to visit their Christmas & Holiday Spectacular in the coming weeks. They’ll have plenty of competition from other commercial holiday attractions like Phoenix Zoo’s annual ZooLights display or World of Illumination in Glendale and Tempe.

"People will get something different here that they won't find elsewhere. They can feel like they're immersed and escaped into an entirely different world," Kyle says. "And that's where Sammy and I are the most confident in our ability: creating something immersive and magical. So I think that will definitely [set] us apart from the competition."

Pratt Brothers Christmas & Holiday Spectacular at Bell Bank Park, 1 Legacy Drive, Mesa. 6 to 10 p.m. nightly; Tuesday, November 22, to Sunday, January 1. Tickets are $14.99 and $75 for VIP admission (which includes a souvenir laminate, a separate entrance, a “Sweet Street” ticket, and other perks).
KEEP PHOENIX NEW TIMES FREE... Since we started Phoenix New Times, it has been defined as the free, independent voice of Phoenix, and we'd like to keep it that way. With local media under siege, it's more important than ever for us to rally support behind funding our local journalism. You can help by participating in our "I Support" program, allowing us to keep offering readers access to our incisive coverage of local news, food and culture with no paywalls.
Make a one-time donation today for as little as $1.