Six Things to Do This Weekend in Metro Phoenix

Attendees of a previous Tour de Fat. Benjamin Leatherman
Congratulations, you made it through another week. Celebrate by having some fun this weekend around metro Phoenix, which from April 8 to 10 could mean a food festival, a Shakespeare performance, a bike ride, or even a Quentin Tarantino-inspired puppet show.

See some Shakespeare in Scottsdale this weekend.
Andrew Pielage

Shall I Compare Thee: The Sonnets

The cool thing about William Shakespeare is that, more than 400 years after his death, the artists of today are still finding ways to make his work relevant and exciting for modern audiences. Case in point: Shall I Compare Thee: The Sonnets, the new work by Southwest Shakespeare Company. SSC calls the show "an immersive, collective experience" and "a new performance art piece, complete with dance choreography, live music, lyrical songs, moving images, and words that dance onstage." Conceived and devised by Mary Coleman Way and written and devised by Dathan B. Williams, the show will be held at the Taliesin West Pavilion Theater, 12621 North Frank Lloyd Wright Boulevard, Scottsdale. Showtimes are 7:30 p.m. Friday, April 8, and Saturday, April 9, and 6 p.m. Sunday, April 10. Tickets are $35 to $45. Jennifer Goldberg

Every (puppet) dog has his day.
All Puppet Players

The elevator pitch for All Puppet Players’ latest production is pretty straightforward: Quentin Tarantino’s Reservoir Dogs, but the characters are not only all puppets, but they’re also canines. The revered 1992 indie flick, which involves a group of criminals planning a diamond heist only to have it go awry, will be satirized by the adult puppet theater troupe in humorously gonzo fashion, complete with foul language, bad puns, a killer soundtrack, and jokes pointing out all the plot holes. The show’s three-week run starts on Friday, April 8, at Playhouse on the Park at Central Arts Plaza, 1850 North Central Avenue, with performances held every Thursday through Sunday at 7:30 p.m. through April 30. General admission is $30 and VIP tickets are $57 and feature priority seating within the front two rows and deals on drinks. Cocktail table seating for two is also available and includes a complimentary bottle of wine and happy-hour prices. Attendance is limited to those 17 and older. Benjamin Leatherman 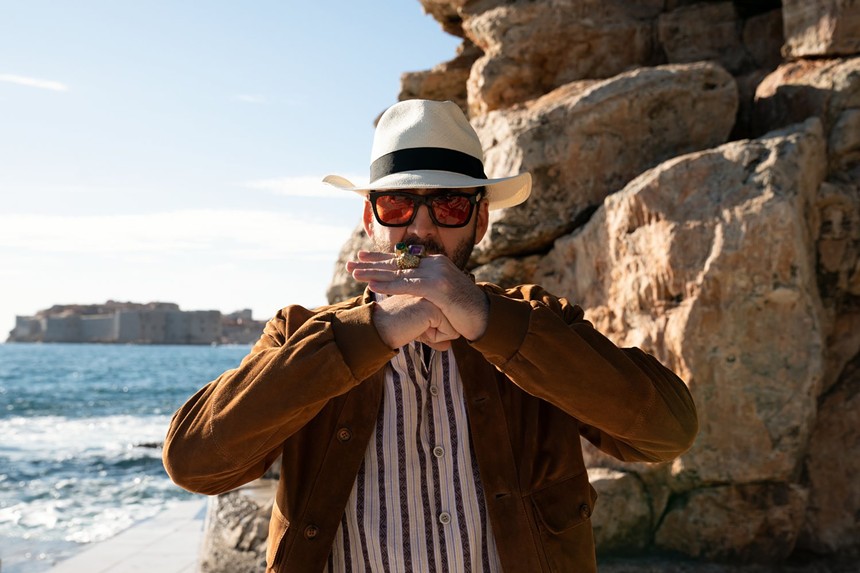 Nicolas Cage in The Unbearable Weight of Massive Talent at the Phoenix Film Festival.
Lionsgate Films

We're already a week into the 2022 Phoenix Film Festival, but the final weekend of the event still has plenty to do and see, including a wide range of shorts (such as Native American-directed, horror-themed, and student-made) and features, plus filmmaker panels and parties. We'd recommend buying a ticket for
The Unbearable Weight of Massive Talent, which we called "a Nicolas Cage meta action-comedy in which he stars as himself. Sort of. He plays Nic Cage, a starving actor who needs some fast work. When he accepts a paid appearance at a superfan’s house, things take a strange turn and the superstar must rely on his trope-filled action movie past." It screens at 7:30 p.m. on Saturday, April 9, at Harkins Theatres Scottsdale 101, 7000 East Mayo Boulevard. For a complete schedule of the weekend's offerings, visit the Phoenix Film Festival website. Jennifer Goldberg

If your favorite things in life include bikes or beer, you’ll want to hit Tour de Fat, a gathering of bicycle and beer enthusiasts happening from noon until 6 p.m. on Saturday, April 9, at Tempe Beach Park, 80 West Rio Salado Parkway. Costumes are encouraged, and you can show up early if you want to register at 11 a.m. for the noon bike parade. Activities at Tour de Fat will include live music by Duckwrth, Capyac, and Brothers of Brass. There will also be various other performances, as well as a mix of games, rides, and interactive art pieces around the park. As for the beer, that will be provided by New Belgium Brewing, the event’s promoter. Admission is free and costumes are very much encouraged. Lynn Trimble

Some of downtown Mesa's many businesses.
New Times Staff

Attention bookworms and word nerds of the Valley: If spending a weekend afternoon strolling through a historic downtown area while interacting with local authors and picking up some new finds sounds like time well spent, the Mesa Book Crawl is for you. The five-hour event on Saturday, April 9, in downtown Mesa will involve the aforementioned activities. Participants will check-in at the OneOhOne Gallery, 101 West Main Street, starting at 11 a.m. and receive a personal passport before hitting up a dozen nearby businesses. Authors will be available at stops, as will a variety of books for sale, and you’ll receive an entry into a prize raffle with each visit or purchase made. Complete details about the event can be found here. Benjamin Leatherman

If you’re a firm believer in facts – particularly those that are scientifically proven, clearly documented, or grounded in reality – the last several years and the nonstop assault on reason and knowledge have been quite tortuous. Renowned biologist, author, and science popularizer Richard Dawkins likely feels the same way, as he’s been fighting superstitions, half-truths, and outright lies with cold, hard facts for most of his adult life. He’s scheduled to appear at the Orpheum Theatre, 203 West Adams Street, on Sunday, April 10, along with theoretical physicist (and onetime Arizona State University professor) Lawrence Krauss.

The two will conduct a Q&A session and screen their 2013 documentary The Unbelievers, which follows the pair as they conducted lectures around the world promoting science and reason. The event starts at 7 p.m. and general admission is $40 to $80. VIP tickets, which offer premium seating and access to an autograph session and meet-and-greet with Dawkins and Krauss, are $250. Benjamin Leatherman
KEEP PHOENIX NEW TIMES FREE... Since we started Phoenix New Times, it has been defined as the free, independent voice of Phoenix, and we'd like to keep it that way. With local media under siege, it's more important than ever for us to rally support behind funding our local journalism. You can help by participating in our "I Support" program, allowing us to keep offering readers access to our incisive coverage of local news, food and culture with no paywalls.
Make a one-time donation today for as little as $1.