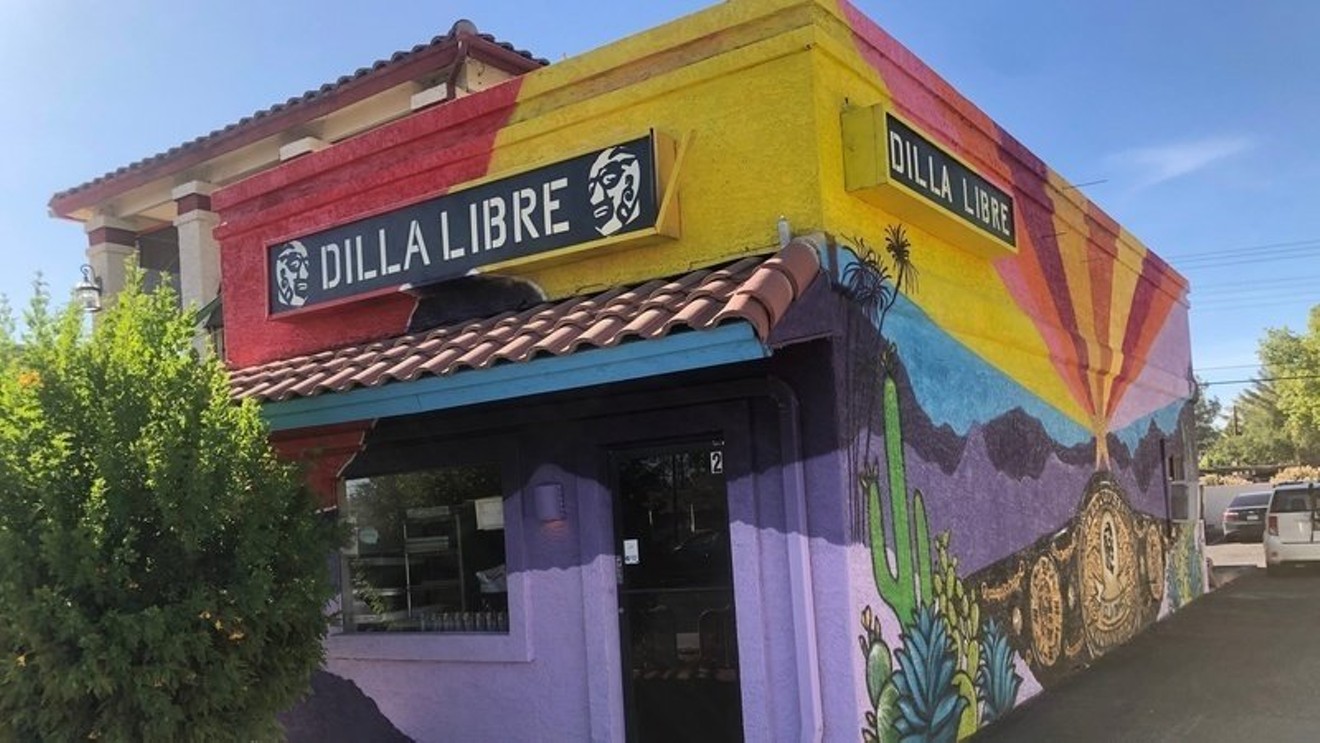 It's been a rough year for Scottsdale Mexican restaurant Dilla Libre and its owner, Mike Baum.

In addition to the significant financial hardships all restaurants are facing as a result of COVID-19, Baum's eatery has a new problem: Its new mural doesn't comply with Scottsdale ordinances for building exteriors.

And Baum isn't backing down. He says he'll close the restaurant before he paints over it.

"It's a mural about overcoming obstacles and not giving up," Baum tells Phoenix New Times. "Everybody out there is fighting their own fight, you know. [The mural] is just to honor all those people and let them know that if you keep on fighting and you don't give up, you win."

Baum has grievances with Scottsdale city government that date back to last summer, when the city began a road improvement project near Dilla Libre's location at Hayden and Thomas roads, an undertaking that lasted until December and that Baum says sharply cut into the restaurant's business. Things were just beginning to bounce back when the COVID-19 pandemic hit. Demand for Dilla Libre's food truck and catering services evaporated, and its dining room closed. (The restaurant still hasn't reopened for dine-in service.)

Baum and a collaborator, Sara Dickson, painted the mural in the midst of the pandemic and the economic turndown. Titled The Champs Are Here, the colorful piece depicts a wrestling-style championship belt. Surrounding it are nods to the desert terrain, like cactuses and mountains, and an homage to the star design of the Arizona flag. Baum intended the mural to bolster the spirit of the community, he says.

But Baum didn't clear the project with the city of Scottsdale, and in May, a code enforcement inspector noticed the building's new look and issued a compliance notice.

Raun Keagy, code compliance director for the city of Scottsdale, tells New Times that all exterior changes on commercial buildings must be approved. There's a pre-application process, and small changes like a slightly different color of paint usually can be approved at the staff level.

But in the case of major changes that don't abide by the city's rules for exterior building colors (such as a colorful mural), the request goes to the seven-person development review board and a public hearing process.

Baum has submitted his application, but there is currently no date set for the board to review the mural situation, and Keagy says he cannot speculate on which way the panel will rule.

While he waits for the chance to defend his mural to the development review board, Baum has started a Change.org petition to keep it, in the hopes that an outpouring of support from the community will sway the board in his favor.

If the board doesn't approve the mural, Baum says he plans to leave it up, consequences — which include heavy fines and even potential jail time — be damned. It's about taking a stand, he says.

"I'm trying to make the community better," Baum says. "I'm trying to keep people motivated to keep going in a dark time, and for that, I'm getting my business taken away and my life ruined."
KEEP PHOENIX NEW TIMES FREE... Since we started Phoenix New Times, it has been defined as the free, independent voice of Phoenix, and we'd like to keep it that way. With local media under siege, it's more important than ever for us to rally support behind funding our local journalism. You can help by participating in our "I Support" program, allowing us to keep offering readers access to our incisive coverage of local news, food and culture with no paywalls.
Make a one-time donation today for as little as $1.