View Master: A Walk Through the Last House Designed by Frank Lloyd Wright 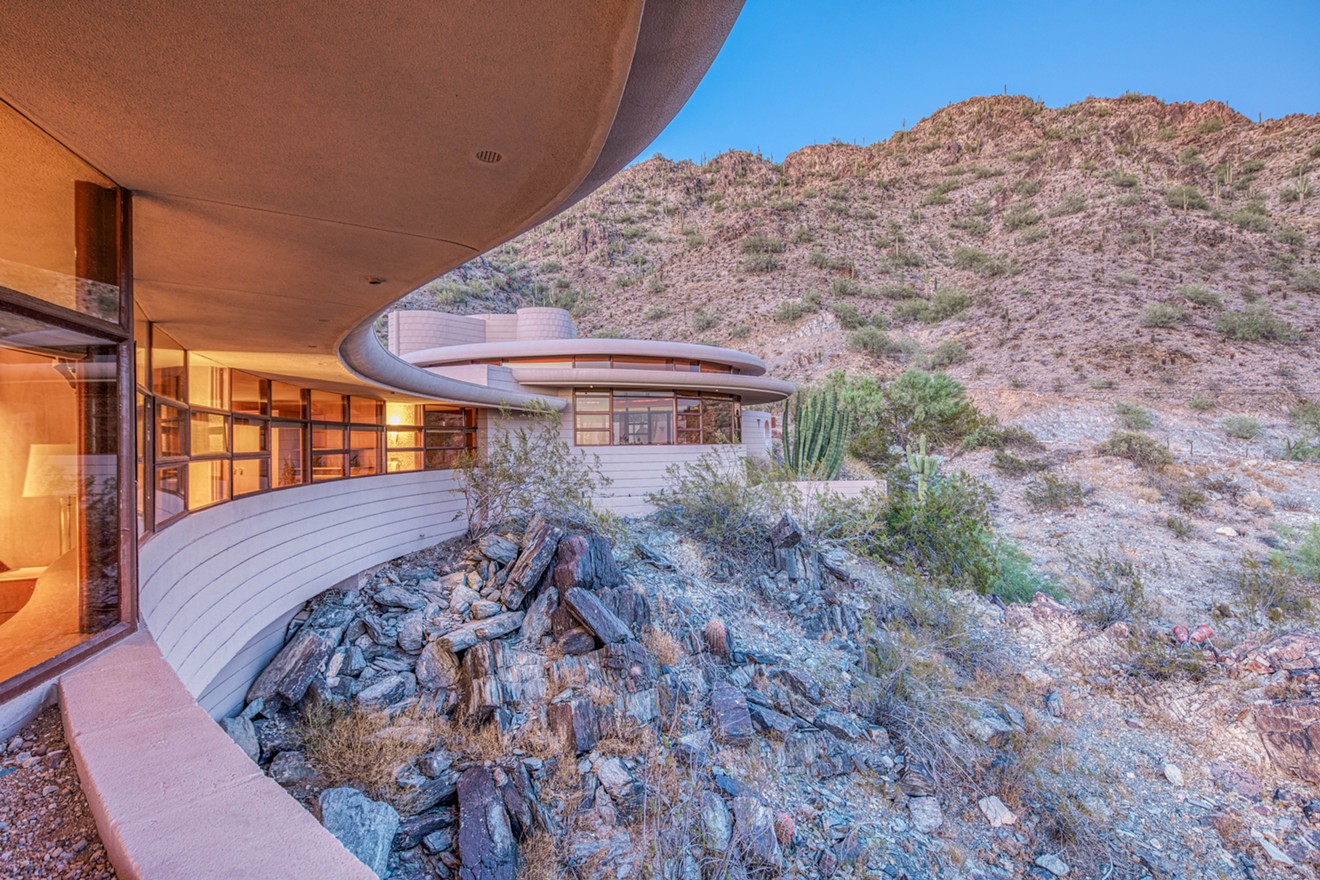 The last house designed by Frank Lloyd Wright will go on the auction block. The Agency “There we go,” Hall said as he disengaged the house’s security system. “No cops will be coming out here now,” he joked.

Hall, who wore patent leather sneakers, walked through the 3,000-square-foot Biltmore home, known as the Circular Sun House. “Wow,” he said of the barrel chairs and low tables arranged around the slump block fireplace. “This stuff wasn’t here last time I was out here.” The furniture, also designed by Wright, will be sold with the house when it goes on the auction block next month.

“There’s no reserve,” Hall said, “which is kind of interesting. I think the sellers could get a little more for it if we had listed it than they might from the auction, but you never know.”

The owners of the house just want it sold, said Hall, who is 24 and has not yet bought his own home. “I could bring my buddies and they could buy it. I could buy it. I think I’d get outbid, though.”

Hall said he didn't think it is likely the house will go for much less than the $2.7 million it was recently listed for. “The people who come to auctions know how much a house is worth,” he said. “The issue with it selling is it’s been on the market for so long, and it’s a bit outdated. There’s so much work that needs to be done on the home.” The house is expected to sell for around $2.7 million. It includes a cool pool.
The Agency
The house was commissioned by Norman and Aimee Lykes in the late 1950s and was last renovated in 1994. It was made of concrete block and its interior walls were almost all paneled in dark wood.

“It’s funny,” Hall said. “I learned about Frank Lloyd Wright when I got this listing. And then I started hearing about him everywhere. I grew up in Marin, and he designed the Marin County Civic Center. He did all this stuff all over the nation. He was in New York, he was everywhere. I was looking at photographs of his work and I thought, ‘This is crazy.’”

Hall admires Wright’s attention to detail. “He really thought of everything,” Hall insisted. “There are cutouts for plants to go in over there. The skylight tells you where to put the table. He makes you cook a certain way because the kitchen is really small.”

He likes how the curved hallway mimicked the shape of the home, and he thinks the view of the Phoenix skyline, visible from the upstairs office, is perfect. “The columns, the curvature, it’s just, like, so unique. I see houses all the time, so this is sort of refreshing. I’m not sure how to say it.”

The flooring was newer, from a renovation in 1994. That was when the owners enclosed the back patio and turned the home’s five small bedrooms into three larger ones, Hall said. He thinks flipping the house wouldn’t be a bad idea.

“You could come in and do a total landscaping out front,” he explained. "Add a patio. You’ve gotta be smart about it, though. Get the right plants, make it look really clean and nice. But keep the vintage of it and the authenticity. You can’t, like, strip everything away.”

Understanding Wright and learning more about the house would be a good idea, Hall felt. “If you go to Taliesin West, that’s gonna make you like this property 10 times more. You go there, open a book, flip through the pages, kind of get a little story to it, it kind of gives a little oomph to the place.”

Hall said he would like to see the house made into a place where people could come learn about the famous architect who designed it.

“Like, you could purchase it and make it like a Frank Lloyd Wright learning arts studio thing,” he said. “And then people come here and read little plaques that you, like, put on the wall about Frank Lloyd Wright, or, like, you know, the history of it. I think you could make tons. I mean the return on your investment would be huge. I guarantee that corporations would rent this space out to do little small events here.”

Alternately, Hall thought, the home would make a great Airbnb. “So that people out on the road could enjoy living in a Frank Lloyd Wright home,” he explained.

The house, nestled on the edge of a mountain preserve, has had more than its share of looky-loos, Hall said. “Oh, my god, we did an open house and we probably had more than 100 people come through. It was insane.”

On the way out, Hall stopped in the driveway. “A lot of people who like Frank Lloyd Wright might be affluent,” he mused. “They’d own a lot of cars. Maybe, like, they won’t want to park them not in a garage. I’d enclose this because it’s essentially a carport.”

He thinks of the house, he confided, as a work of art. “The first time I came here I was, like, ‘Wow, this is pretty cool.’ You have to be here to really understand it. It’s a piece of art, it completely is that. People who understand that and get the architecture and the significance of it, they’d be willing to pay for it.”
KEEP PHOENIX NEW TIMES FREE... Since we started Phoenix New Times, it has been defined as the free, independent voice of Phoenix, and we'd like to keep it that way. With local media under siege, it's more important than ever for us to rally support behind funding our local journalism. You can help by participating in our "I Support" program, allowing us to keep offering readers access to our incisive coverage of local news, food and culture with no paywalls.
Make a one-time donation today for as little as $1.