Under the Sun: Passing the Time By Firing Back at Jehovah’s Witnesses — With Letters 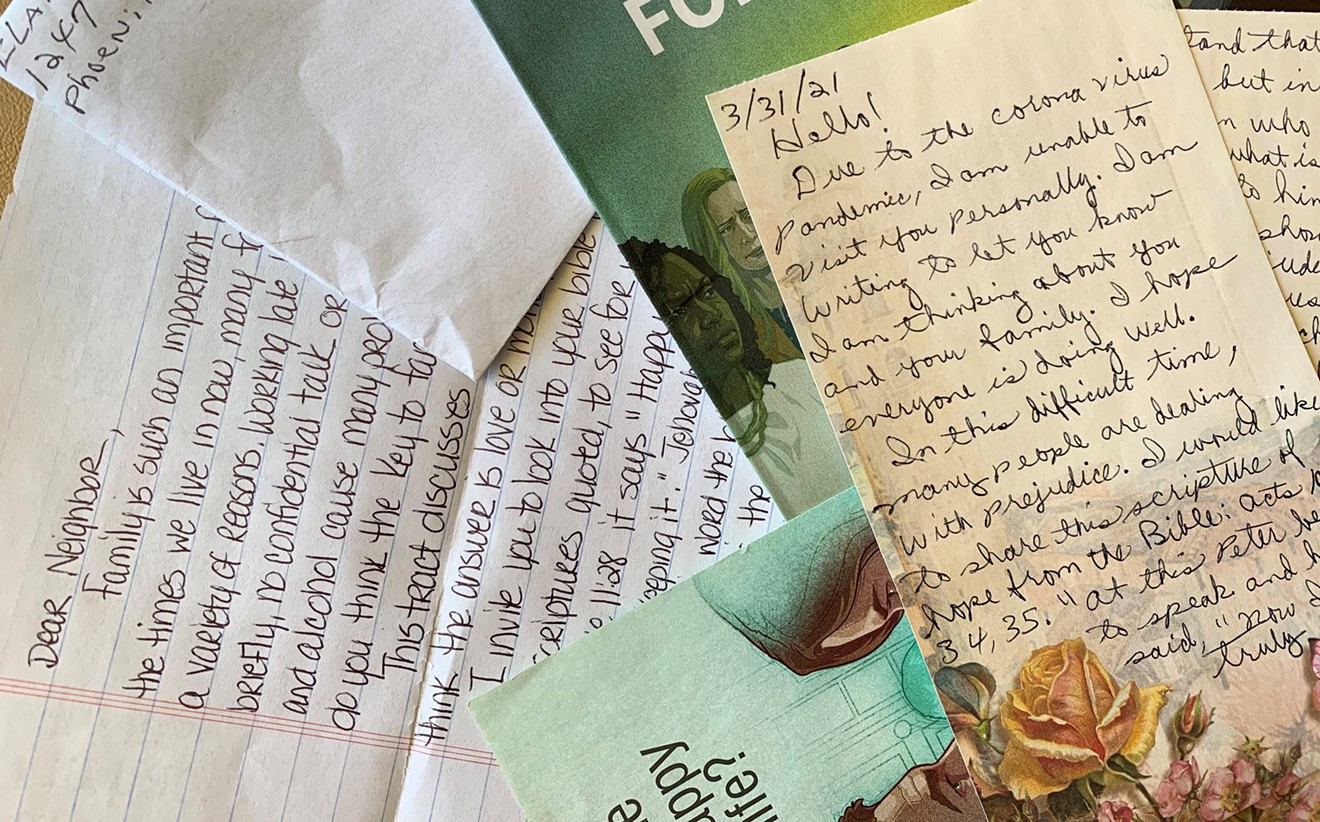 Kayleigh's got a box full of letters. Kayleigh

Kayleigh had run out of postage stamps and was waiting for new ones to arrive. It was slowing her assault on a local congregation of Jehovah’s Witnesses.

She pointed to a stack of letters she’d already written to what she liked to call “the JWs.”

After she lost her waitressing job last year, Kayleigh contracted a nasty case of COVID. “I was bored, I couldn’t work, and my after-thingies kind of laid me out,” she said of the post-COVID vertigo and lung damage she’d been left with. “And then I got this JW letter in the mail and I knew my purpose in life.”

That purpose, she explained, was to do battle with people she thought were forcing their religion on her. Her former brother-in-law’s ex-wife used to be a Jehovah’s Witness, and back when they’d both been married to the Jones boys, she’d filled Kayleigh in on how things worked in that religion.

“They go door to door to preach, right?” she asked no one in particular. “But then the pandemic hit, and they couldn’t do that. So they started writing to people. I don’t mean like emails or texts. I mean, they wrote letters. To strangers. With a pen!” (Fact check: It's true.)

She flung a handwritten letter, penned neatly in ink on white-lined legal paper, across the table. “Dear Neighbor,” the letter began. It was from a stranger who wanted a woman who lived on Kayleigh’s street to know how sorry she was that the pandemic kept her from visiting in person to discuss the Bible and how Jesus was definitely not the Son of God.

“I don’t have anything against the Jehovah’s Witnesses,” said Kayleigh, who referred to herself as a “lazy Methodist” and made it a point not to share her last name with newspapermen. “I have everything against them.”

She pointed an index finger into the air. “One, they believe in Armageddon. Two, they don’t believe in Hell. Three, they think Jesus became the King of Heaven in 1914.”

Kayleigh paused and leaned in a little. “1914,” she repeated slowly. “Like the same year Arizona became a state.” (We actually achieved statehood in 1912, but close enough.)

She resumed her counting. “Four, they show up at your house to try to convince you their religion is the right one, which tells you they think yours isn’t. Five, when they can’t come bother you at home because of COVID, they write you letters pretending they care about you. Six, they have really ugly stationery like your grandma would use.”

She held up a letter dated March 31 that was signed “Blessings, Elaine,” written on pale notepaper printed with butterflies and roses.

“I was bitching to my neighbor about how I got this JW letter around Christmas, and she ran inside and came back with a letter she’d gotten,” Kayleigh recalled. “We started asking around and practically everyone on our block had gotten one. I gathered them all up and read them and then I got really mad.”

She turned her anger into a new hobby. “At first, I got a bunch of my friends and family together on Friday nights. I ordered pizza and we’d socially distance and read the letters out loud and laugh. After we were all pizza-ed up, everyone would write their own letter to whatever congregation.”

Attendance at Kayleigh’s Friday night JW parties dwindled, maybe because she was very strict about what a response letter could contain.

Today, it’s mostly just Kayleigh doing the letter-writing. “I get it,” she shrugged. “People got bored writing letters about something I’m mad about.”

Once word got out that she was collecting letters from Jehovah’s Witnesses, people began bringing them to her. “I had a post up on NextDoor, and I got a ton of JW letters from that. But then some asshole took the post down.”

Kayleigh said she hated the brochures that came with the letters almost as much as the letters themselves. Her dining room table was littered with them. On the cover of one, a drawing of a sad-looking little boy sat slumped under the legend, “What is the key to happy family life?”

“For me, the key to happy life is not having people shove their beliefs down my throat,” Kayleigh said as she fiddled with a bandage on her index finger. “This blister is slowing me down. Maybe instead of brochures and letters, the JWs would like to mail me some Band-Aids.”

She paused to smile. “Or some more postage stamps.”
KEEP PHOENIX NEW TIMES FREE... Since we started Phoenix New Times, it has been defined as the free, independent voice of Phoenix, and we'd like to keep it that way. With local media under siege, it's more important than ever for us to rally support behind funding our local journalism. You can help by participating in our "I Support" program, allowing us to keep offering readers access to our incisive coverage of local news, food and culture with no paywalls.
Make a one-time donation today for as little as $1.