After a .22-caliber revolver was confiscated from his carry-on bag at Sky Harbor in February, KTAR radio personality Bill Heywood was questioned by airport security but was allowed to make his scheduled flight to New York anyway.

Claiming he'd forgotten the weapon was in the bag, Heywood later announced he was "gratified the system works."

Best Place to Get Rid of Your Brother-in-Law 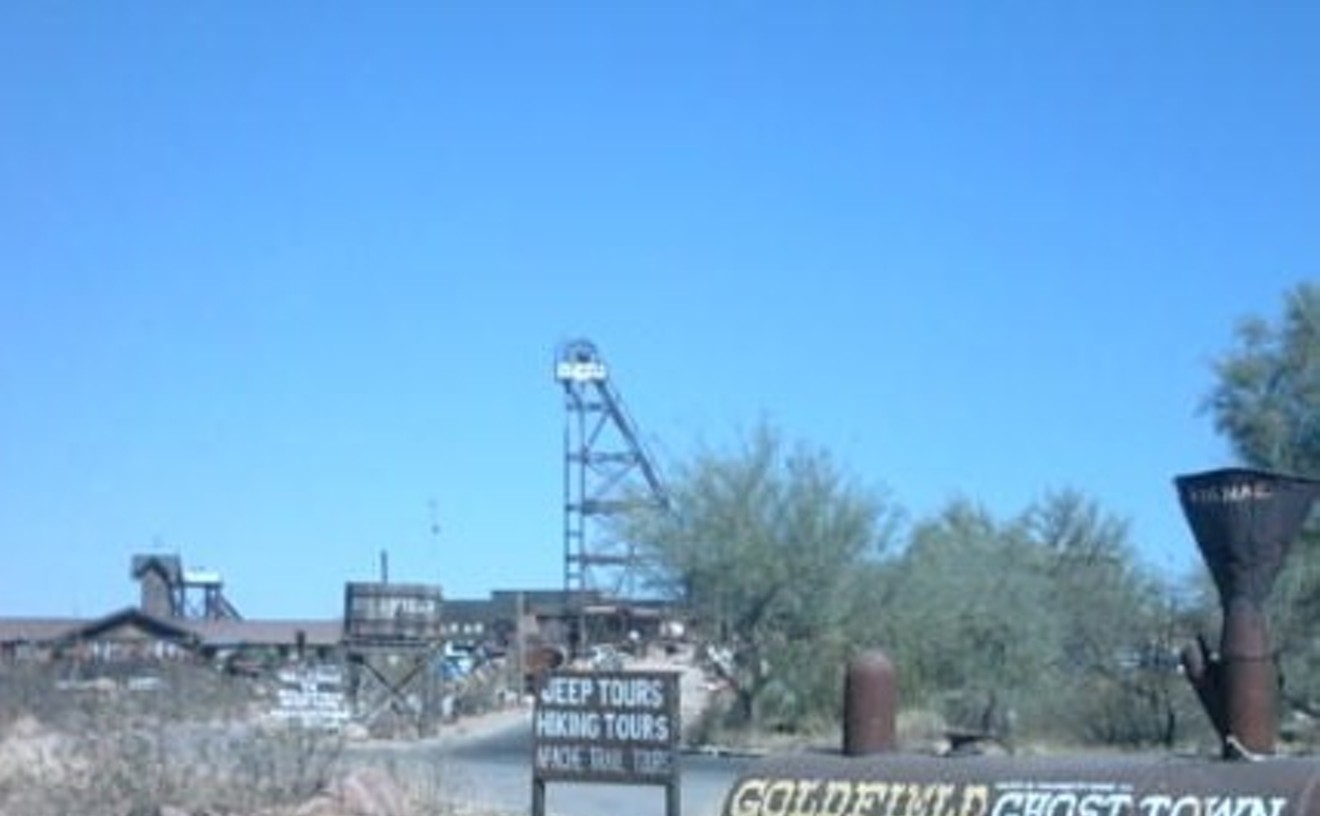 If you think Sheriff Joe has an itchy trigger finger take on due process, try running sideways with the law here in Goldfield.

For a mere $10, a friend or family member can have you arrested, jailed, tried and hanged within five minutes by a couple of Old West sheriffs in full regalia and full of (feigned) firewater. It's all in fun, but rest assured, even in jest, there is nothing so humiliating and unnerving as being hunted down like a rabid dog and run through a kangaroo court to the gallows. It's especially awful if said suspect has ever been arrested for real. This is a wonderful way to get a little payback on winter houseguests who have overstayed their welcome.

The Goldfield bad cop/bad cop show will resume around Thanksgiving and carry on through the winter months.

Goldfield also offers a full-day gauntlet of cheesy Western kitsch for families willing to suspend their good sense of taste and propriety. Like the old mining towns Goldfield emulates, there seems little here that people won't do for a little spare change -- the train ride is enjoyable, the jeep or helicopter rides are a hoot (if you can afford them), the mine tour is much less amusing.

Still, it's a great place to spend an afternoon with visitors and kids in the winter. And you can't beat the scenery, with both the Superstition Mountains and Four Peaks serving as backdrops to the town.

There are few guilty pleasures on the planet as consistently rewarding as those Spanish-language soap operas known as telenovelas. Unlike their maddeningly dull American counterparts, telenovelas are all-out sexual romps delivered with enough high-octane melodrama to make Charo blush.

KDRX, Phoenix's Telemundo affiliate, is the best place to score your daily telenovela fix. Without having to touch your remote control, you get the steamy Amor Sin Limite, Mueca Brava (the unlikely tale of a rich girl posing as a peasant), and the network's centerpiece: Xica de Silva, the loosely historical (and surprisingly graphic) story of a Brazilian slave who wins her freedom by exploiting her sexual prowess. History never tasted so good.

Oh, yeah, you also get the nightly news, for those of you who are into that sort of thing.

The surest evidence that the local Hispanic market is experiencing explosive growth can be found on the radio airwaves. In 1999 alone, three new Spanish-language stations joined an already crowded field, which now includes eight stations (not to mention KKFR-FM 92.3, which goes out of its way to reach Latino hip-hop fans).

In simpler times, local Spanish-language radio was thoroughly dominated by KNAI, known as La Campesina, part of a United Farm Workers network based in urban areas. And although its numbers have inevitably dropped in the past two years, KNAI remains the conscience and the soul of Spanish radio in the Valley.

While other stations opt for a pop-friendly, synthesized brand of Tejano, KNAI cranks out accordion-driven conjunto and polka rave-ups, with a smattering of acoustic waltzes, and just enough social commentary to remind you of its roots in Cesar Chávez's labor movement. Ultimately, La Campesina is a daily aural reminder that there's no point in crossing over to the mainstream if you lose your traditions along the way.

It's part of the cutthroat competitiveness of modern sports talk that every radio jock thinks he has to prove his worth by being a bigger, more abrasive smart-ass than the next guy. It's to Jeff Kennedy's considerable credit that he doesn't bother to play this annoying game.

Kennedy, known to listeners as "The Trainer," has always been a sincere, likable radio host. But since jumping from KGME to KDUS in 1997, he's gained exponentially in command and confidence. What really separates Kennedy from the local pack are his respect and affection for the "friends of the program" who call in every day, and his willingness to admit that he's not the all-knowing king of sports trivia. Though he's enthusiastic about all sports -- and more sympathetic than most talk-show hosts to women's athletics -- he candidly admits that he's no great authority on hockey, so rather than babbling ignorantly about it, he lets his callers educate him.

With a strong supporting cast that includes the insightful Evan Andeen, Kennedy is a touch of class in what can often be an ungainly genre.

David Leibowitz is the smartest guy on local radio. Just ask him. Leibowitz's self-possession notwithstanding, this guy is head and shoulders above the rest of the radio rabble. He's informed, extremely quick and frequently ironic in an otherwise irony-free airspace. His print journalism background explains both his sinus-deep voice and his ink-stained depth. His is a talk show from which it's actually possible to learn something. Now if he'd just stop doing those dreadful eye surgery commercials.

Best Place to Have Fun Learning With the Kids

Most city history museums are a hodgepodge of stuff somebody gave them when the city's first rich white people died. No context, no narrative, no fun. Just lots of Victorian finery. The kids last maybe 30 minutes.

At the greatly revamped Mesa Southwest Museum, though, all that dull old stuff is now brilliantly weaved into an epic kid-friendly tale of Arizona, a tale that spans some three billion years and includes everything from meteors and trilobites to territorial jails and the making of the movie Wyatt Earp.

The star of the museum is its new Prehistoric Wing, a 40,000-square-foot display that doubled the museum's space when it opened in May. With giant automatronic dinosaurs and a towering waterfall, the new wing keeps the kids excited and engaged as they digest lots of hard science and history.

The museum also has two galleries that host changing exhibits as well as numerous hands-on programs for kids.

If you're like us, you're weary of local TV newscasts that somehow manage to be simultaneously stuffy and shallow. It's not like that with KTVK's NewShow, an informal yet informative experiment in local journalism and, yes, infotainment. This hourlong 10 p.m. newscast is led by real news, and then -- much like the progression of sections in a newspaper -- gets softer as the minutes fly by. Channel 3 is still the most fearlessly directed local broadcast operation, capable of grinding sacred cows into red meat. But it's the laid-back, whimsical sense of the NewShow that's most refreshing. It's a risky format, and we admire the chutzpah. The irrepressible Liz Habib, who's more hostess than anchor, sets the tone. She's a chameleonlike pro, able to convey empathy when she's reading the grave news yet maintaining a beguiling and impish mien when the show lightens up. The likable yet credible Mike Warren is Habib's trusty sidekick. The NewShow's exploration of Valley nightlife, music and alternative culture is a sensation with a younger demographic (dare we call it "alternative TV"?). Mike Chamberlin, meanwhile, is a sportscaster with conviction. He's not afraid to call a shovel a shovel, or tweak the barons of the Valley sports scene when the situation warrants. Sure, we'd like to see more investigative and enterprise stories on the NewShow -- the hourlong format pleads for it -- but the show is still in relative nascence. So we'll give the Channel 3 crew until the next Best of Phoenix to serve even more nutritious fare.

Misery loves car-poolers. So why suffer rush-hour gridlock alone when you can share the ride with DJ Steve Tingle, whose stock company of phone-prank characters (formerly heard over KEDJ) takes a back seat to no one?

Mel Blanc reincarnated, the vocally versatile Tingle regularly tickles prisoners of morning drive-time listeners as he single-throatedly creates the biggest assortment of wackos this side of a Farrelly Brothers flick. There's honky-hatin' ho "Clarissa Jenkins," the flatulent flatbacker who once flummoxed a locksmith with a cell phone call after she claimed to have accidentally locked herself in the trunk of her car -- in the middle of a serious attack of gas. Then there's the ever swishy "Ramon Jaworksy," whose lisping pleas for a pair of hunky bunkmates didn't cut much ice with the receptionist at a local military recruiting office. And who can resist horny yenta "Blanche Horowitz," who inevitably elicits puzzled gasps from victims as she provides obscene translations for old Yiddish phrases?

But if you're laughing so hard that you find yourself in a minor fender-bender (as has been rumored to happen), don't call us. Call Clarissa Jenkins, you uncircumcised monkey!

Best Place to Take the Kids for a Hot-Weather Picnic 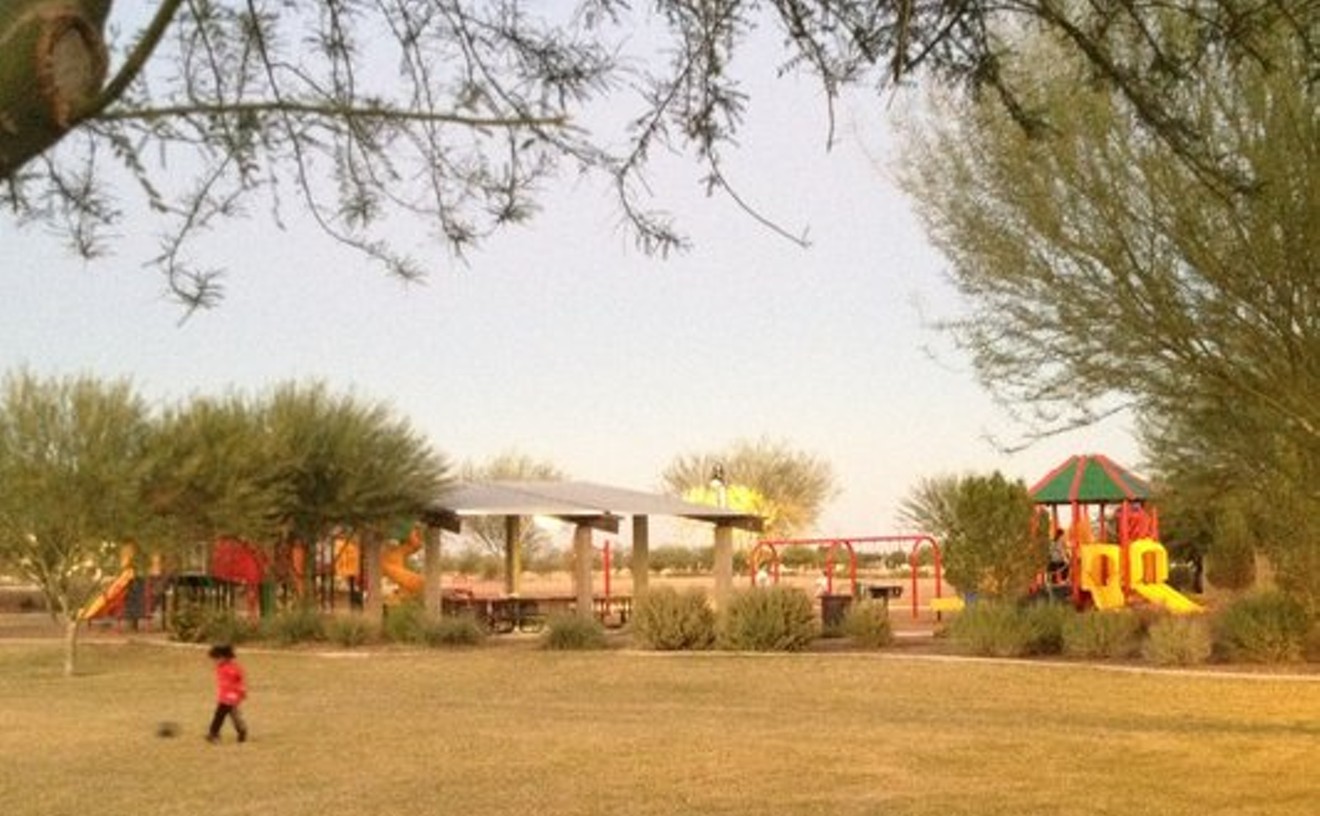 An outdoor picnic in the dead of summer?

First, pack a picnic lunch with lots of cold beverages. Then suit up the kids in their swimming gear, grab the sunscreen and head for Desert Breeze Park.

Ignore the lovely lake surrounded by trees and picnic tables. Instead, head to the children's playground area. Beneath an earthen berm/overpass/observation deck are an assortment of shaded tables. This covered passageway connects a traditional playground with a "spray pad" where three dolphins and an elephant (climbing structures the rest of the year) squirt water on a cyclical timing system from May to October. Eat, chill, eat, chill -- well, you get the idea.

Repeat process as needed through mid-October.