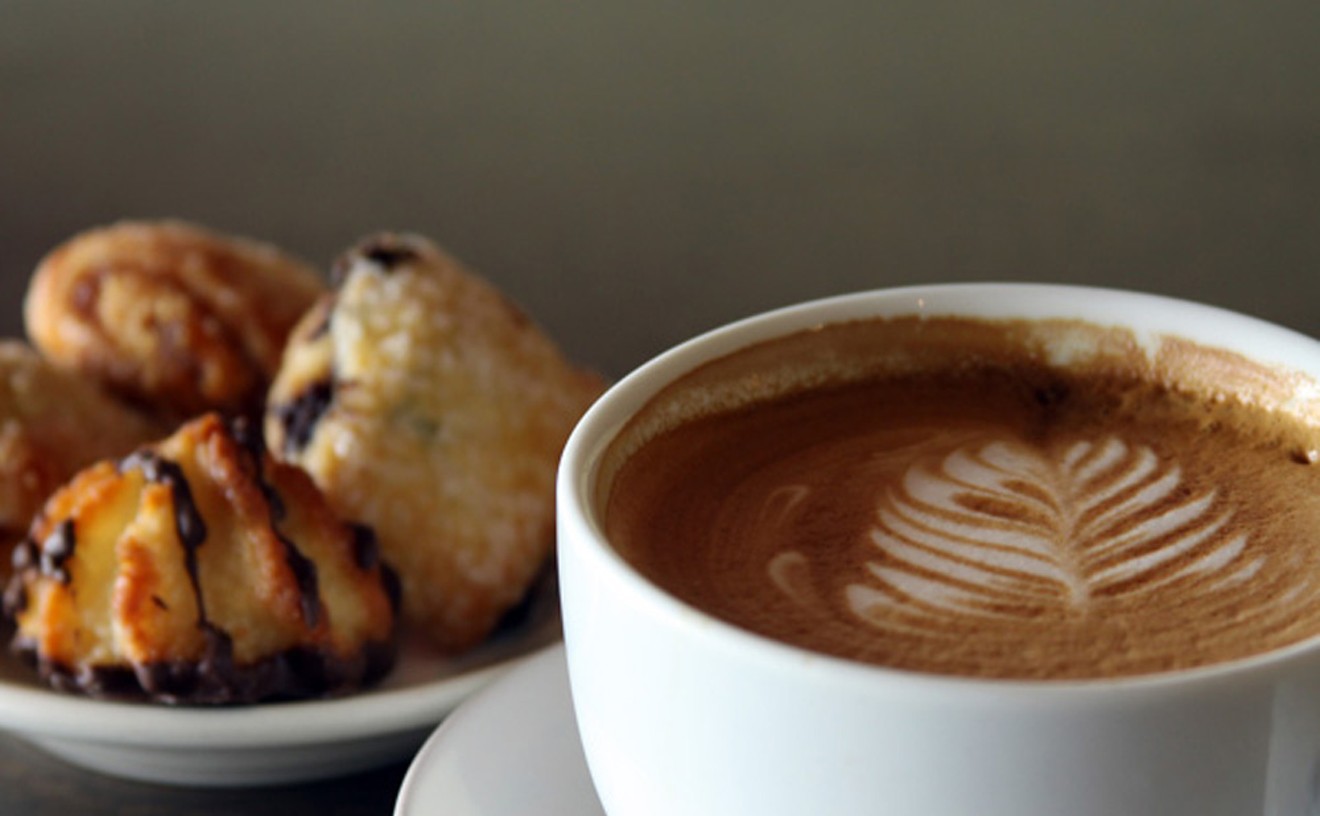 Timur Guseynov
There's a ridiculously catchy children's song that goes, "M-O-M-M-Y needs C-O-F-F-E-E, D-A-D-D-Y needs C-O-F-F-E-E," and once you've heard it, you will find yourself singing it -- especially on those mornings when you have stayed up too late the night before working (or drinking) and your kid decides to greet the day at dawn. On those mornings, or any other time you require refueling, you should take yourself -- and your offspring -- directly to Mama Java's Coffee House. Mama Java's is a coffee house in the traditional, down-to-earth mold: The baristas are welcoming but not in-your-face friendly, the couches are comfortable, and the walls are lined with shelves of books that aren't just there because somebody at corporate HQ decided books look "authentic." You can get a nice cup of coffee or a properly brewed mug of tea, and a little nosh to go with. Junior can sip on milk, chew a bagel and loll on the couch for a few peaceful moments. You might even get a chance to take one of those books off the shelves . . . And be sure to check out Mama's musical events, perfect for kids or, better yet, for a night you score a sitter.

Half wired coffee house and half gaming center, the eJoy Cafe, housed in what used to be a Bank of America branch just off Mill Avenue, is far from the most serious fragging spot in town. The twentysomething ASU students serving up espresso and scones in the front room are often clueless about fixing the poorly maintained PCs running the memory-intensive games in the back (recently, a bored hacker managed to install software at every station that allows anyone with the similar program at home to control the computers remotely). And heaven help the gamer who needs an extra copy of the Diablo II Expansion CD to load the game. But at only $10 a day -- five bucks for kids under what the staff guesses to be 18 -- it's the only place in town where you can play Warcraft, Counter-Strike, BattleField 1942 or The Sims Online 'til 2 a.m. on the weekends for less than a case of Red Bull. If you can take the heat in the Vault, an actual converted bank vault where headphones are optional (as long as you close the hefty steel door), up to eight of your closest enemies can wage their own private war. Fire in the hole!

Hook some new kids on the Bach. Through its series of concerts for children ages 6 to 12, the Phoenix Symphony reels in little listeners with familiar music, dynamic guest artists and interactive learning. An hour of free preconcert activities -- including the "instrument petting zoo" -- sets the stage for each show; with the ever-engaging associate conductor Bob Moody at the podium, the concerts explore themes like time travel, dancing and outer space. This season's series takes the stage October 9, beginning a four-Saturday series when "Magical Musical Mystery!" melds music from Harry Potter and The Lord of the Rings with magic by local tricksters Matt Lemm & Emily. And high culture doesn't carry a high price: Ticket packages offer admission to all four concerts for as little as $30.

We'll do almost anything for a dollar -- or to save one. Like recently, our relentless pursuit for bargains galore brought us to this weekly commercialism commotion sprawled across the parking lot of the Phoenix Greyhound Park for -- among other things -- toiletries and socks offered at cut-rate prices. The little one has also joined us, and his attention is quickly riveted to blue tarps laden with bootleg toys.

There are knockoffs of all shapes and sizes: classic Transformers gestalts, unusually colored Power Ranger Megazords, Gundam Wing robots, and Robotech Valkyrie jets, ready to be drafted for a living-room war against GI Joe and the Rebel Alliance. Gentle hands are required, as some of the Chinese imports are made from such shoddy plastic that they'd shatter if you looked at them incorrectly. And someone should have considered running a spell-checker before exporting these goods, as multi-packs of "Spader-Man" and "Dragoon Ball Z" action figures (complete with bastardized graphics) look a little off.

We give the young'un $20 to buy the "Power Player Super Joystick," which promises thousands of classic NES games built into a Nintendo 64 control pad and wicked-looking Sig Sauer-esque light gun to boot. It's a sturdier substitute to toys that could potentially transform from robot to implement of impalement in the blink of an eye.

On the way to the parking lot, our now-joyful charge sings "Spader-Man, Spader-Man, no one fixes pets like a spader can."

BEST SMALL WORLD, AFTER ALL

"ArtVille" at the Arizona Museum for Youth

Curious kids can go to town at the Arizona Museum for Youth, where ArtVille -- "Arizona's newest planned community" -- was founded this spring. Built on a "town philosophy of artistic exploration," the permanent exhibition is among the few spaces in the U.S. aiming to introduce babies and toddlers to fine art. "Art" serves as mayor of the 2,500-square-foot "hotspot for tots," where the median age is 2.5 years -- and where points of civic pride include a kiddy cafe, changing art displays, weekly activities and seasonal celebrations. Kids 5 and younger can take classes at the art studio, catch puppet shows at the performing arts center, explore the cushy Tot Town Square crawl space, and get back to nature at the tempera lake and fishing pier in Art's Park.

Grown-ups, however, have to watch their steps: Adults are required, by law, to be accompanied by a child while inside the town limits.

This little shop -- which also features a design center -- is a treasure trove for the new mom, particularly if someone else is buying. We fell in love with a feather boa-ed pig and a perfect pink ballet costume, and the selection for boys is just as precious. In case anyone is wondering, our personal favorite is the tiny red-and-pink bowling shirt, with Princess embroidered on the chest.

If you're still buying brand-new clothes for your kid, you've gotta be a brand-new parent. Early in the game, we learned that it's pointless to dress up little Sophie in that $75 Baby Lulu dress with matching hat and diaper cover. Five minutes later, the dress is drenched -- either from the top of Sophie or the bottom. But we still love Baby Lulu and all the other fabulous baby clothes taunting us from department store racks -- so when we're jonesing for a junior designer fix, we head to Small Change. This used baby/kids' clothing store is strategically located in the heart of Scottsdale, right near all those moms silly (and wealthy) enough to buy retail. For just a few bucks, we can snatch up a nifty, barely worn outfit (the buyers at Small Change are very picky, we learned when we tried to sell them Sophie's soiled castoffs) and have some money left over for the toy and video section. Small Change also has a nice selection of maternity clothing and big-ticket baby items like strollers and cribs.

Teach those babies how to shop early!

BEST WAY TO KEEP THE KIDS HAPPY DURING DINNER

Some people have nightmares that they're back in school, naked, about to fail a test. We have nightmares that we're out to dinner with our kids. Let's face it: Fine dining isn't big among the toddler set. And so when we do venture out, we bring along a suitcase-size bag stuffed with art supplies and toys. Usually, that engages our youngster until the menus arrive. The crayons most restaurants offer are under the table by the time the chairs are pushed in. That's why we were delighted when the hostess at P.F. Chang's handed us a package of Wikki Stix on a recent visit. The "twistable, stickable, buildable, playable" sticks -- the brain child of Phoenicians -- look like brightly colored, oversize candle wicks. Turns out, you can twist them into all sorts of shapes, then untwist them and do it again. They're non-toxic, so it was okay when one disappeared.

Next time, we'll ask for two packages. We wanted to play with the Wikki Stix, but the toddler didn't want to share.