As the Barbershop movies made clear, often the best place for black folks to get in on some free-flowing gossip, boisterous political debate and, occasionally, a good haircut is the community barbershop. In the Phoenix area, however, it's hard enough to find a stylist who knows the difference between a bald fade and a finger wave, let alone one who can officiate over a no-holds-barred throwdown on the D.C. sniper and Rosa Parks' ass.

Fortunately, a real-life Calvin's can be found on the Valley's west side, at Another Level. Operating out of the same modest storefront since early 1997, Another Level boasts a staff of 13 barbers and hair stylists whose outrageous banter, says owner Brandon McFadden, could give Cedric and Eve a run for their money. "There's a lot of characters here," says McFadden. "Sometimes I feel like I'm the only normal one in the shop!" Sports and R&B luminaries ranging from Penny Hardaway to Glenn Jones have been known to drop in for a taper, but mostly it's the same friendly crowd of gossiping gals and ware-hawking guys, some of whom will hang out for three hours or more without even getting a cut. "There's a lot of sitting around," says McFadden. "People just like the atmosphere."

We hate to be so blunt, but we've gotta say it: Get those poor print reporters out of the TV studio and let them write their stories. Then we'll have more time to watch Lew Ruggiero. Lew is the smartest, hardest-working, best-prepared reporter on local television, and, let's face it, this is a bonus in his business, rather than a requirement.

Lew also knows how to stand in front of a camera and talk. And he looks great in a windbreaker.

John Hook is the best thing about TV news in the Valley, and he's the best thing about Fox, period. We like him because we can tell he's smart, that he understands the news he's reading. We like him because he avoids the goofiness of his colleagues on other local stations. And most of all, we like John Hook because we can watch him at 9 p.m. and still catch the 10 Spot on MTV.

We feel like we have a personal relationship with Dennis Lambert, which is how we think you should feel about your morning radio host. Sure, we've let Howard Stern into the car on occasion, even flirted with the boys at KTAR, but when we want to know what's going on in the Valley -- and, as an added bonus, what's up all over the country and the world -- we tune in to KJZZ.

Dr. Mike Newcomb isn't content with healing the sick. He's on a mission to heal the country, if he can, one radio show at a time. Newcomb's progressive, liberal radio show On Second Thought began last summer and has quickly expanded from its initial hourlong time slot in the morning to three hours during drive time. Newcomb's a physician in the mornings, making rounds at local nursing homes and then rushing to KFNX's downtown studios for three hours of political discourse with callers that has become more lively as his listenership has grown. His theme music has evolved as well, with songs like Tears for Fears' "Sowing the Seeds of Love" getting replaced by edgier tunes like Ozzy Osbourne's "Diary of a Madman."

We can't wait to hear what's next.

It's an unusual year in the Valley when not one of its four so-called major sports franchises enjoys even modest success. But while neither the Suns, D-Backs, Coyotes, nor Cardinals (as usual) could muster more wins than losses in the past 12 months, the Arizona Rattlers made their case to reign supreme over the hearts and minds of Phoenix sports fans.

The Rattlers could have thrown in the towel back in April, when they were toiling away in the bottom of the Arena Football League standings at a dreadful 3-5 -- with one of the toughest schedules remaining of any AFL team. Instead, Hunkie Cooper (who broke 20,000 career all-purpose yards), Sherdrick Bonner and sackmaster Bryan Henderson led the Rattlers on a 10-game winning streak, achieving what was once impossible by claiming the division title and home-field advantage throughout the playoffs. And no, not even a third straight ArenaBowl loss could sour such a feat.

Just when Amare Stoudemire had become the crown prince of the Valley sports market, Randy Johnson proved that the king has yet to leave the building. With the Big Unit's perfect game in May against the Atlanta Braves -- in which he set down, in order, all 27 batters he faced, while striking out 13 -- Johnson gave the Diamondbacks their first no-hitter in franchise history (Johnson's second) and a dismal season's lone bright spot. That was, until he later earned his 4,000th strikeout on June 29, becoming just the fourth pitcher in history to reach the milestone. And on September 15, he passed Hall of Famer Steve Carlton for third place on the all-time strikeouts list. A World Series ring, four straight Cy Young awards, close to 2,000 strikeouts, and now the perfect game -- all in a D-Backs uniform. As long as the Unit finishes his Hall of Fame career here in Phoenix, he won't just be the greatest left-hander to play the game -- he'll be the greatest athlete ever to represent the Grand Canyon State. Amare, wait your turn.

BEST PLACE TO BE A YANKEES HATER

This authentic New England seafood house could easily be the best place to love the Boston Red Sox, but we figured being a BoSox fan and a Yankees hater were synonymous, and given the D-Backs' pummeling of the Yanks in the 2001 World Series, it's more universal to hate the Evil Empire.

Owner Bill Deacon, a burly Beantown boy at heart, opened the quaint Cape Cod-like joint in 2000 to create a West Coast haven for New Englanders and Red Sox fans. Not only does he televise every game, he has his own Green Monster, an oversize hot dog truck plastered with Red Sox paraphernalia that sits in the parking lot as a beacon for Boston fans. Lunch patrons can order authentic Fenway Franks, made with the actual ballpark's buns. When Red Sox supporters flood the restaurant, Deacon says Yankees fans are welcome, but, he adds, "I won't be responsible for what happens."

The Phoenician's Centre for Well-Being

Abs of steel? We prefer a more natural look: abs of granite. We sculpt them at the Phoenician, where the glitzy Centre for Well-Being spa goes back to basics with its new "Nature's Gym" outdoor obstacle course. Starting at the base of Camelback Mountain, the all-natural workout finds fitness equipment in the desert's natural resources. Resort instructors lead 75-minute cross-training sessions, including stretches on desert boulders, pull-ups on paloverde trees, bicep curls with granite rocks, sit-ups on golf tee boxes and yoga exercises in flower beds. And packing a cardio punch: power walks on the golf course and stair-stepping through flowered paths. It all ends with cool-down stretches amid garden waterfalls and -- in our own restorative touch -- three vodka tonics poolside. 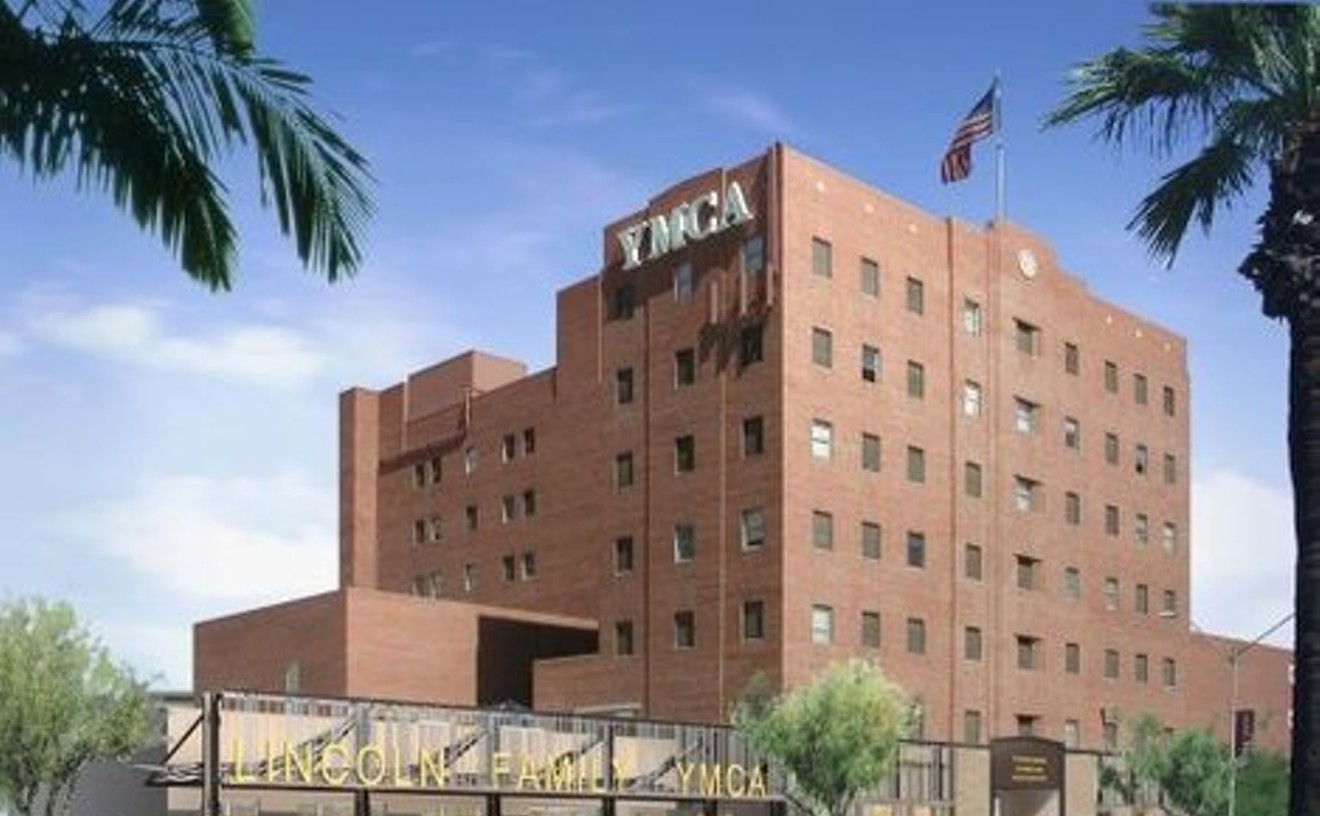 Who wants to dress to impress for a workout? Who wants to pay big bucks for the privilege of getting sweaty in public? And who really thinks that prestige matters when it comes to pumping iron? Nobody here, obviously. The Y is an ego-free oasis of self-improvement, and if its diverse membership wasn't so darn friendly and outgoing, you might never be able to tell the secretaries from the attorneys, or the techies from the art gallery owners. Camaraderie usually stems from butt-kickin' yet fun classes such as hatha yoga, Cycle Reebok or power step, but even if you're a loner who shows up to do some time on the treadmill or in the weight room, you'll be part of a community before long.