BEST PLACE TO LOSE A PAYCHECK THIS SIDE OF VEGAS 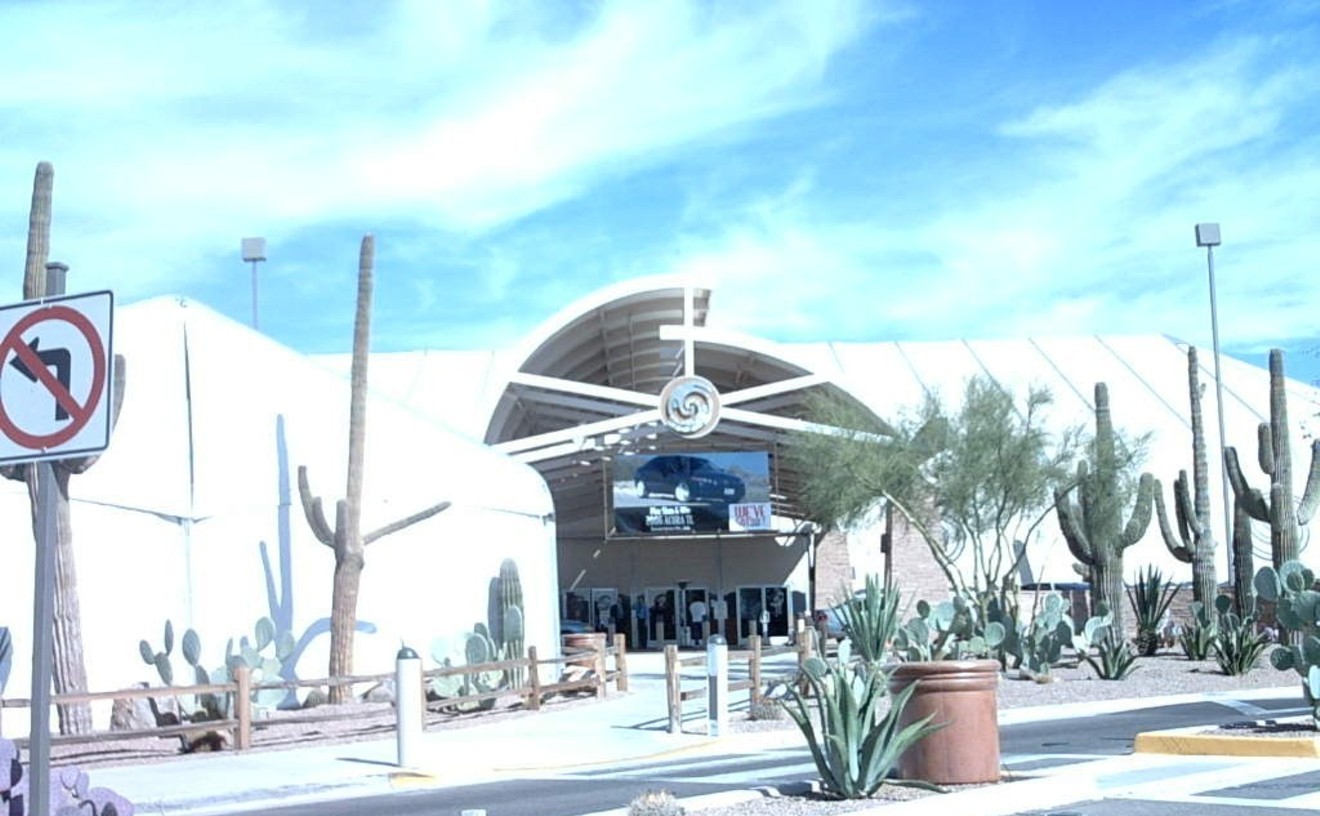 Ever since the drive to Las Vegas got speedier when U.S. 60 went four-lane, local cardsharps have had more of a reason to skip town for Sin City. But why risk becoming another roadside cross when the Salt River Pimas have all sorts of ways to separate you from your weekly wages? With two casinos within a 30-minute drive from downtown Phoenix, you're just the kind of chap or chick who'd be an ace at improving the tribe's bottom line. True, Vegas has showstopping entertainers, but get enough $3 beers into you, and even Beatlemania Live will start resembling the real Fab Four.

You've probably been jonesing for an opportunity to practice your Texas Hold 'Em skills ever since watching all those World Series of Poker reruns on ESPN2, so stop off at Talking Stick -- where there's also Omaha and 7 Card Stud to be had. Two rules to remember, high roller: System players go broke systematically, and the house always wins. So when the flop doesn't go your way for the nth time, head down the 101. The main digs await, where 30 blackjack tables (from $5 to $250), 1,500 multidenominational slots and keno lounge will help buy you a one-way ticket to Tap City, population: you.

BEST WAY TO PICK UP SOME CASH

Ever wonder why that solid antiperspirant works so well? Because some kind, sweaty soul was willing to try it out for you first, to guarantee it won't cause a heinous rash in a hard-to-reach spot. He got a few bucks for his time, and so can you. Hill Top Research, a national product-testing firm, has a location in Scottsdale, and it's looking for people to test moisturizers, shampoos, cosmetics and, yes, antiperspirants and deodorants. Be warned -- or, rather, warn your friends and family: Guinea pigs have to go through a "washout" period first, during which you're not allowed to use any sweat/stench-preventing products.

You probably won't get stinking rich, and you might end up with that aforementioned rash.

We know the nice folks from Arizona Chain Reaction are flipping through "Best of" right at this very moment, clutching their heads and shaking their fists whenever they see mention of a chain store or restaurant. Sorry, guys, we tried to keep it to a minimum -- but sometimes bigger is better. Not always, though, which is why we wanted to pause and say a few kind words about this little group. Modeled after an organization in Austin, Texas, that has done a lot to help preserve that city's unique flavor, Arizona Chain Reaction's creators are hell-bent on adding some spice to the Valley by helping small businesses flourish -- and giving us even more great stuff to write about.

We're still giddy over the impending arrival of IKEA, but we're thankful for you, too, Arizona Chain Reaction.

Some mornings, reading the daily paper just feels like a chore. For a treat, we turn to The Vent. It's a simple concept: just a column down the side of the editorial page of the Tribune, devoted to the rants of readers who call a dedicated phone line and, well, vent. Random excerpts from the callers' diatribes -- usually having some connection to current events or something specific that's appeared in the paper, or, often, another Vent -- are printed in no particular order, making for an often creepy glimpse into the mind of the East Valley resident.

One day in August, The Vent included a slam against an anti-Prop 200 column by an ASU professor: "I'm sick and tired of these liberal(s) such as Roxanne Doty calling concerned taxpaying citizens racist and white supremacist. I'm glad I wasn't in her political science class in that liberal university wasteland that doesn't even have a dress code."

"I just served 16 weeks of grand-jury duty in Florence and would do it again. I will be 80 years old in September."

And finally, a comment on The Vent's favorite topic, which is, of course, The Vent:

"For all you readers who complain you don't like The Vent: Why don't you get a life and quit complaining and read something else. Because there are a whole lot of us who really like reading The Vent. It makes us very, very happy."

He used to be president of the Salt River Pima-Maricopa Indian Community. She used to, um, work for Governor Fife Symington. We'd heard they were an item, but we'd never seen them together until one night around Valentine's Day, when we spotted them together in the Camelback Trader Joe's. It was just before closing time. They bought a lot of coffee and chocolate raspberry sticks. She paid.

It was a great Phoenix moment.

Jason Rose is not a shy fellow. And he doesn't shy away from controversy -- he shills for the likes of Joe Arpaio and Andrew Thomas. But we hear that even Mr. Rose was blushing when his latest personal PR campaign went, well, flaccid. Rose ran a half-page ad in the Arizona Capitol Times -- a small paper that covers the Arizona Legislature -- advertising his public relations, um, firm. The ad showed a nude black man flexing his biceps, wearing a sign over his crotch that read, "Size Does Matter" -- a reference to Rose's, er, long client list. At the bottom, in fine print, the ad read: "Not an actual picture of company president Jason Rose."

We can't imagine that ad won Rose a lot of African-American clients. But we can't wait for Rose's next PR campaign.

Phil Gordon is truly a pig in shit. This guy was dying to be the mayor of Phoenix for as long as we can remember, and now that he's got the title, we've gotta say -- he hasn't screwed up yet. Actually, he's done some good, steering downtown development away from sports and demonstrating a real vision for the city's future. We like the fact that he's working closely with ASU to bring a medical school downtown.

We know the old saying, you gotta go along to get along -- so go along, now, fearless leader, and get us what we want, like a replacement for Patriots Park.

If you do your job right, Mayor Phil, everyone in town will someday love this city as much as you do.

Technically, Deb Gullett represents north central Phoenix in the Arizona Legislature. But in her relatively brief time in office, she did a lot of good for the whole state, demonstrating again and again that she's not afraid to stand up to special interests and fight for what's right. This year, she made sure a law was passed that protects victims of car accidents from hospitals that want to double-dip in the victims' insurance settlements. Gullett is smart and she doesn't hedge. Even though she technically survived a challenge to her campaign petitions earlier this year, she decided to opt out of what promised to be an ugly race -- probably the smartest thing she could have done.

But we hope we haven't seen the last of her.

They're so vain, every anchorman probably thought this flick was about them. Certainly the Valley's morning news crews bought into the PR hoopla surrounding the summer's Will Ferrell comedy Anchorman, like so many slow-on-the-uptake short people thanking Randy Newman for the musical tribute. The Fox 10 Arizona Morning crew of Ron Hoon, Rick D'Amico and Ilona Carson, in particular, really got into the act the Friday of the movie's première, with the guys sporting stick-on Ron Burgundy mustaches and jackets, ribbing eye-candy Carson with classic '70s chauvinism.

But while D'Amico's vintage air-check reel from his on-air start in Michigan showed him with a hilarious poufy hair style closest to Ferrell's character, it's Hoon's naturally smarmy persona that makes him a ringer for the film's cartoonish Casanova. The age-indeterminate Hoon, an on-air staple in Phoenix for decades (who appeared to be hitting up Dick Clark for grooming secrets on a recent visit), has the kind of quasi-movie star appeal Burgundy exploits.

The happily married Hoon doesn't skirt-chase young admirers, but he's not above using his perfect teeth and Robert Redford hair to scoot past the plain Dan Davises on the celebrity junkets. A few East Valley residents still recall a media circus Christie Brinkley hosted for her ill-fated fashion line in the '80s, when Hoon shamelessly puppy-dog trailed Brinkley around the Superstition Springs Dillard's, finally wedging himself through the closing doors of an elevator just to get in a few more quality moments with the then-Mrs. Billy Joel.

As the Barbershop movies made clear, often the best place for black folks to get in on some free-flowing gossip, boisterous political debate and, occasionally, a good haircut is the community barbershop. In the Phoenix area, however, it's hard enough to find a stylist who knows the difference between a bald fade and a finger wave, let alone one who can officiate over a no-holds-barred throwdown on the D.C. sniper and Rosa Parks' ass.

Fortunately, a real-life Calvin's can be found on the Valley's west side, at Another Level. Operating out of the same modest storefront since early 1997, Another Level boasts a staff of 13 barbers and hair stylists whose outrageous banter, says owner Brandon McFadden, could give Cedric and Eve a run for their money. "There's a lot of characters here," says McFadden. "Sometimes I feel like I'm the only normal one in the shop!" Sports and R&B luminaries ranging from Penny Hardaway to Glenn Jones have been known to drop in for a taper, but mostly it's the same friendly crowd of gossiping gals and ware-hawking guys, some of whom will hang out for three hours or more without even getting a cut. "There's a lot of sitting around," says McFadden. "People just like the atmosphere."