Got a few hours to kill before your fave Scottsdale danceteria opens? Join your pin pals for a few frames of Cosmic Bowling (a.k.a. Xtreme Bowling) at the nearby Frontier Lanes, before trying to talk your way past the doorman at CBNC. Although many Valley alleys have been lowering their lights and blowing out their loudspeakers with Steppenwolf or Meat Loaf classics for years, this south Scottsdale bowl-a-rama strikes 'em all down with a chic clientele packing the lanes on Fridays and Saturdays for $15 (or Sundays through Thursdays for $12).

Music videos from such artists as Pink, and The Vines (but, oddly enough, not Bowling for Soup), and psychedelic light shows are projected onto two gigantic screens over the alleyways while punky skate bettys fling glowing balls alongside spiky-haired gym rats quaffing pitchers of Amber Bock, and clubwear-clad Scottsdale fembots smoking Parliament Lights.

Sure, you could save a few bucks by throwing gutter balls with Flo and Jethro out in Apache Junction, but why miss out on getting taunted by frat boys exclaiming, "Rolled a 239, bitch! Beat that!"? 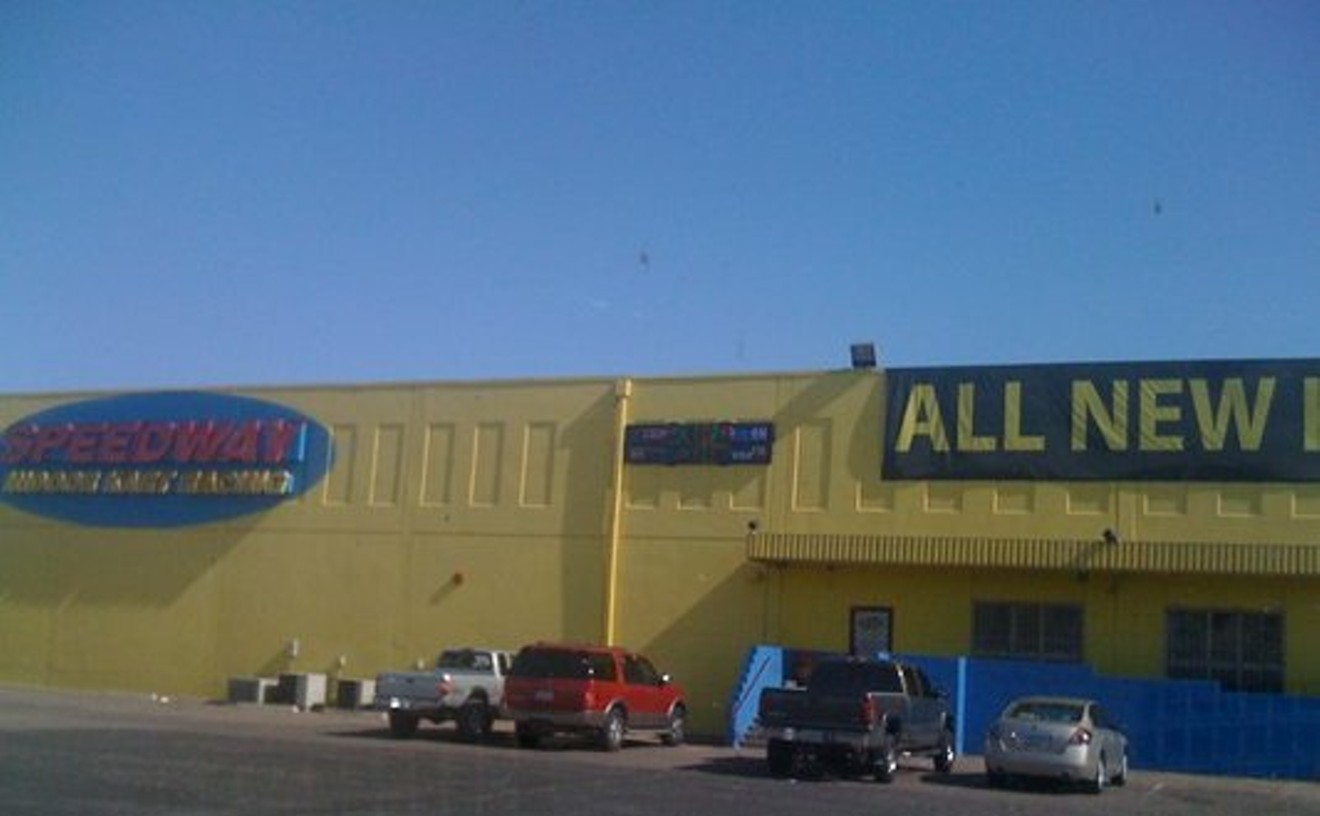 It'll cost you about $1,200 a day to get your speed fix driving race-ready Corvette C5s out at Bob Bondurant's School of High Performance Driving. For most of us, that just ain't gonna happen, particularly on any regular basis. 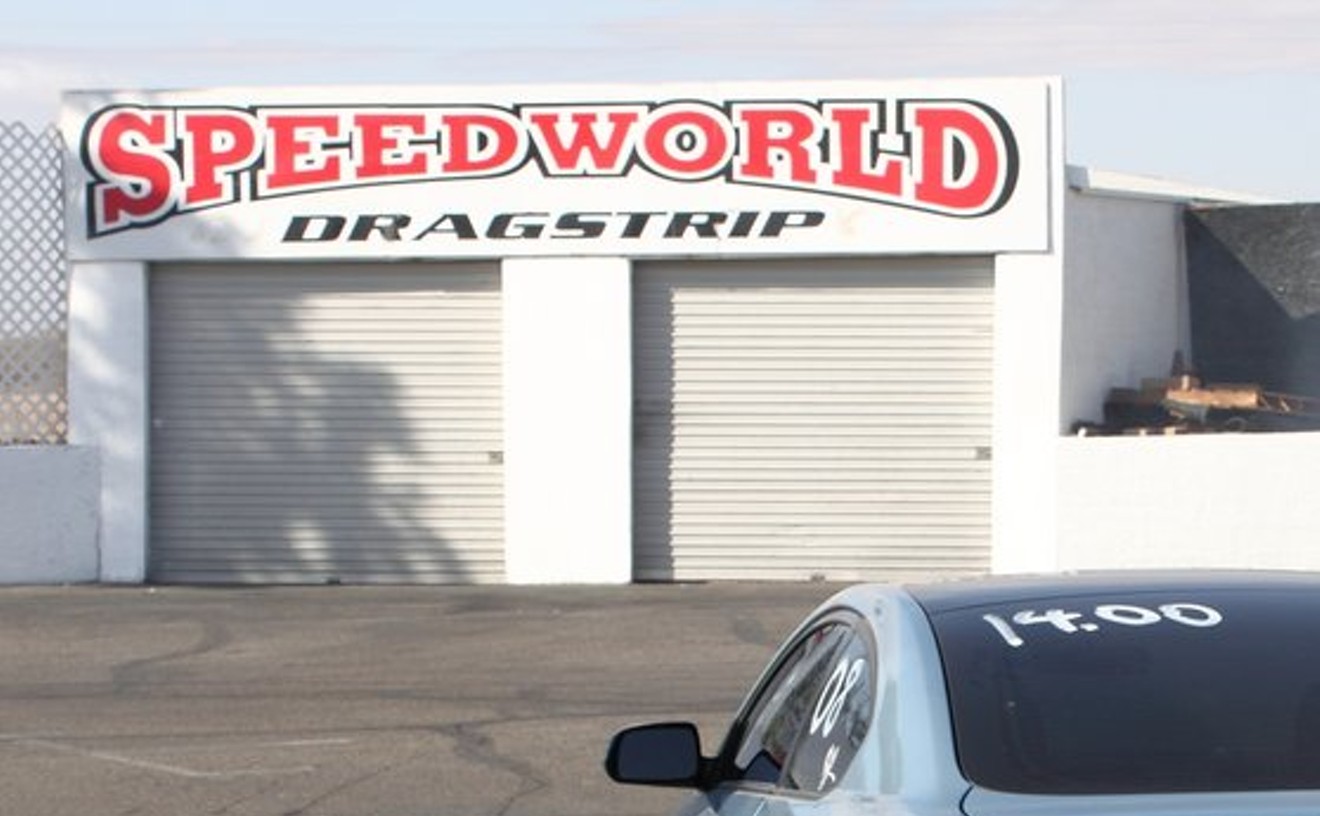 Crotch rockets. Imports with supercharged engines, injected with nitrous oxide for extra speed. Tricked-out Mustangs that are all show and no go. Hoochie-mamas that can do a neck roll to beat Mr. Fantastic. Fly bitches that'll make you drool like a fool.

These are just some of the sights you'll peep if you head up to Speedworld in Wittmann on most any Saturday night for the come-one, come-all drag-racing program. All vehicles are welcome, from that '67 Camaro with the big block, to your sister's Scion fresh off the lot.

For $20, you can pretend you're Darrell Waltrip, or Danica Patrick if you're chickalicious. And about once every other month or so, After 9 Events (www.after9events.com) sponsors a racing extravaganza out there that includes a bikini contest and foam party and lasts until 5 a.m. Think you got a car that can do that quarter-mile in less than 10 seconds? Then you better be there, buster.

Phoenix to Prescott via Wickenburg

The first 40 miles on U.S. 60 are nondescript desert. Flat, but with not a lot of traffic -- given the sparse population in these parts, you should be able to get through this in a half-hour or less. A few miles past Wickenburg, things get interesting as you begin the ascent to 5,200 feet on State Highway 89. Highway workers built this road, but it's a gift from the motorcycle gods. Even on the weekends, cars are few and far between as the twists begin and only increase in radicalness as you rise into the cool air. Go too fast and you'll get dizzy. The vistas are plentiful and marvelous, especially at sundown, but pay attention to the road. You'll be shifting dozens of times each mile as you head into turns where the brave rub knees on asphalt.

For the return trip, take State Highway 69, a less technical road with sweeping curves. Still a lot of fun, and a chance to relax after spending the last hour carving canyons. The road meanders for 60 miles before linking up with Interstate 17 for a fast blast back to the big city. It's a 200-mile round trip, and as fine an afternoon in the saddle as you'll find in these parts.

Carbon buildups are bad, and downright dangerous for the modern exhaust system. In the interests of safety and proper maintenance, the conscientious motorcycle rider must occasionally remove small carbon deposits before they have a chance to become big ones. And there's only one way to blow carbon out of your pipes. You need a road less traveled, a place where snowbirds, cocker spaniels, deer and assorted other road-kill-in-waiting are scarce, where driveways are few, a road that's not too far away and accessible year-round both to the rider and, in case of calamity, Medevac helicopters.

State Highway 238 on the eastern outskirts of Maricopa County is perfect. The sparsely populated stretch between the town of Maricopa and the Sonoran Desert National Monument is scenic, unincorporated and rarely patrolled by police, who have better things to do than scout for speeders on a highway that leads nowhere. The biggest obstacles are garbage trucks going to and from the Butterfield Landfill, but once you're past the dump, you can really open it up. This isn't twisty territory, nor is it a yawner straight shot -- there are just enough turns to keep it interesting as the roadway's width shrinks in direct correlation to your speed. An ideal side trip on the ride to Tucson.

BEST PLACE TO CATCH A WAVE

Of the Valley's three water parks, all owned by the Mesa-based Golfland Entertainment Centers, only Big Surf offers a wave pool where you can actually ride the waves -- and even then, the only spot the curls break strong enough to carry your rental raft all the way in to shore is at the three-foot depth marker, about two acres in from where the underwater gates release the rolling manmade pipelines.

For FOGs (surfer slang for Frickin' Old Guys) who remember the lagoon when it first opened in 1969 as the world's first inland wave pool (pictures of the park's original layout still hang in the front office), it's hard to see so much of the gnarly water going to waste on pintsize kooks and hodads. During regular operating hours, the deeper third of the lagoon remains roped off, as are the stairways surfers used to descend at the deep end to short-cut paddling out from shore.

But at least once a month during the summer, Big Surf returns to its glory days by offering an after-hours run of the entire lagoon to anyone itching to really catch a wave. For $35, anyone over 12 can grab one of the old '60s longboards the park still hangs onto and ramp it up on a series of 10 extra-big waves that Big Surf's patented plunger sends curling down the entire two-and-a-half-acre length of the pool. Call early to reserve your spot, though; even ocean-lapping Californians are known to show up for this way-cool after-hours pool party. 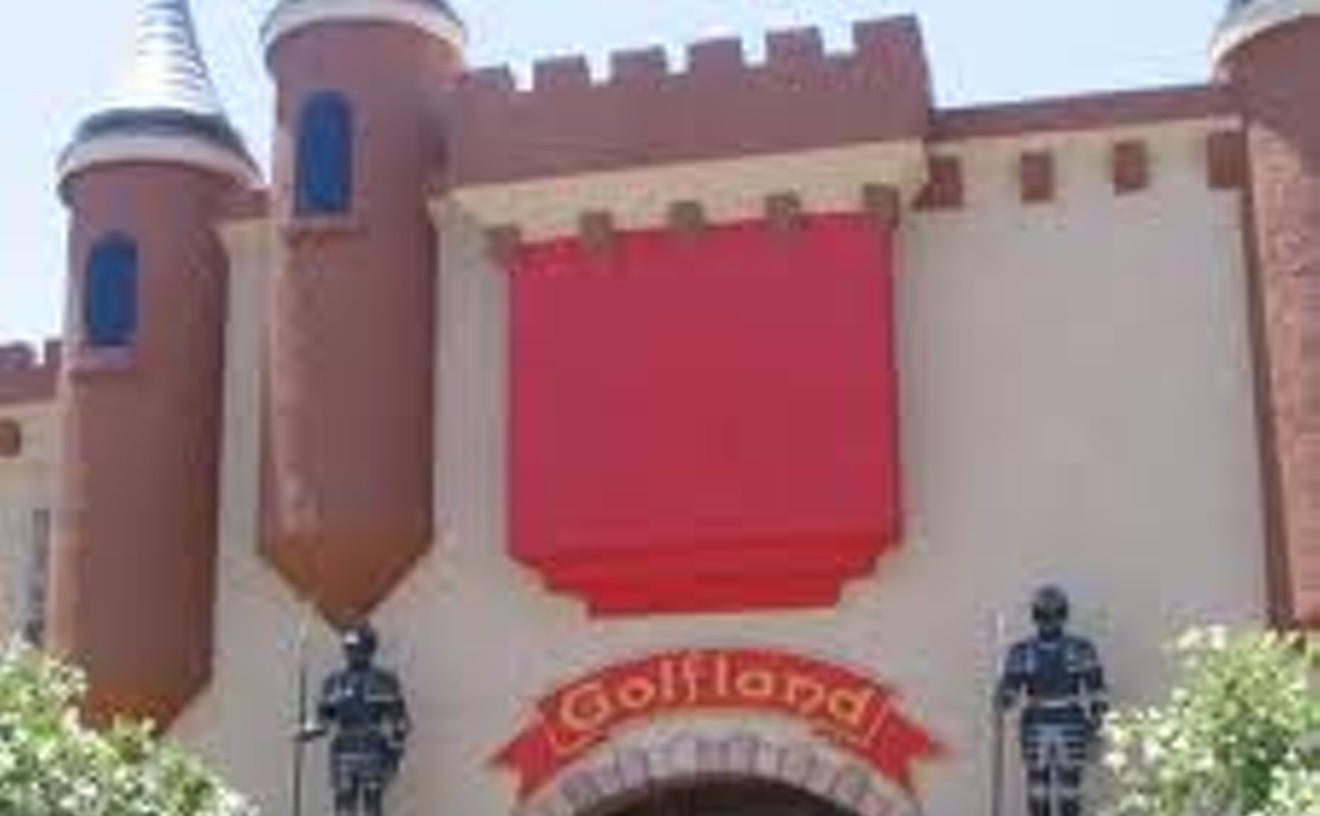 Sandwiched between the barreling tube slides of the entertainment complex's water park and its oddly secluded bumper boat lagoon, the mini golf course at Golfland/Sunsplash wins points for funneling the park's fascination with H2O throughout the typically hot, hot, hot putt-putt setting. It takes the average player a few holes into the course to notice the elaborate Rube Goldberg-like contraption that carries water up, down and all around the course, threading around the miniature buildings and obstacles like an early Central Arizona Project design gone crazy from the heat. But once the dusty duffer catches a wind-blown mist from an errant wooden gutter, it's all cool. 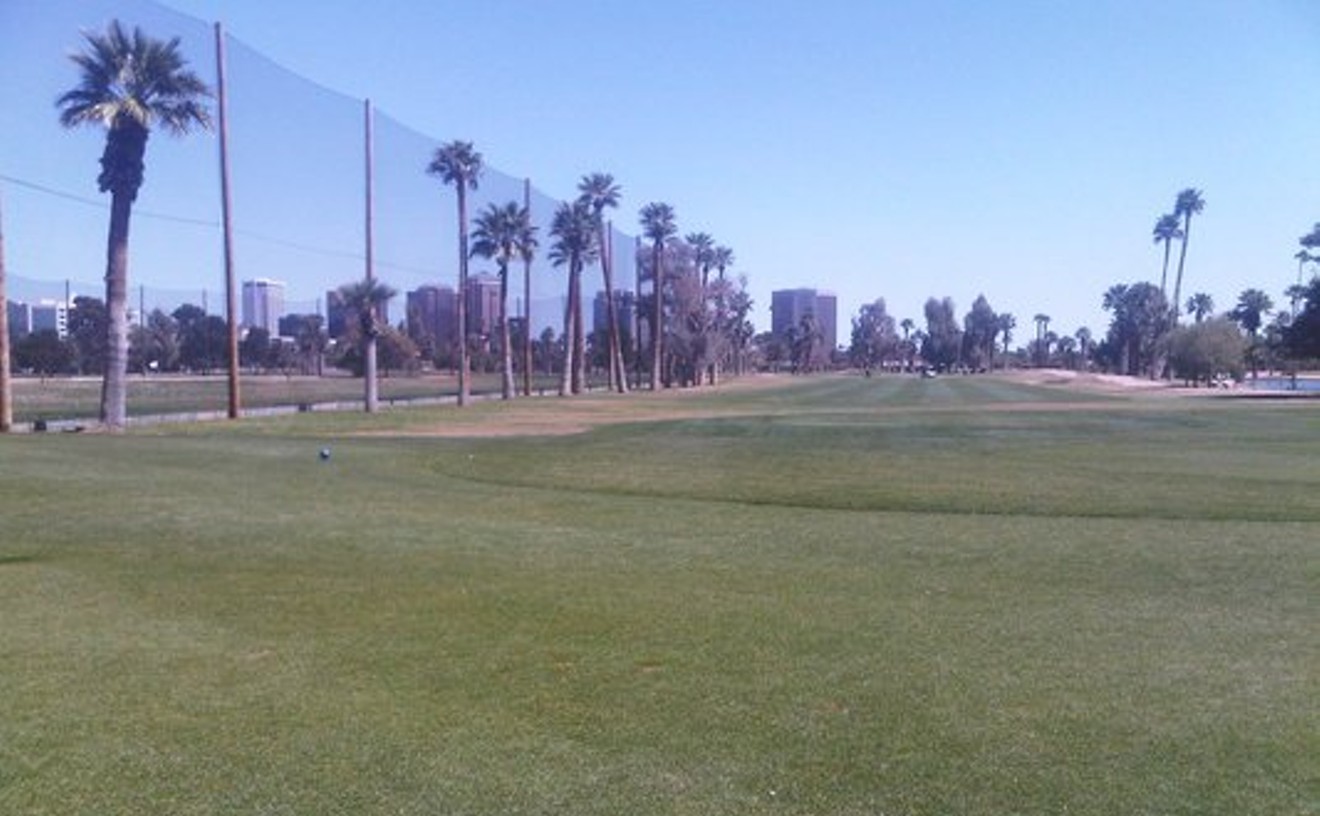 So you're sick of the grind -- the tough morning commute, the uptight boss, the boring gig. And you like to whack the little white ball around now and then. Then why wait for the weekend, when there's so many other things facing you? The Encanto courses may not be as challenging or as beautiful as any of the fancier tracks to the north (we've heard of Troon, mind you). But if you can spare a few hours for nine decent holes with the goofy sticks, you won't go wrong with this venerable city course. The price doesn't hurt -- no more than a sandwich and a fancy Starbucks drink -- and the relaxation factor is incalculable. We know a prosecutor who routinely strips down to a tee shirt at lunchtime and slips over to the driving range to hit a large bucket or two. Then he drives back downtown and returns to his job of sending people to prison. See? It works.

A good city golf course must have open arms to all ages, skill levels and pocketbooks. And if it's a city course in a course-saturated and golf-crazy place like the Valley, it needs to offer good golf, too.

Bear Creek in south Chandler fits both bills. Besides offering good golf at a great price, the course has an expansive and affordable driving range as well as an 18-hole executive course great for a quick $10 round. The main attraction is still the Bear course, designed by Nicklaus Design's Bill O'Leary. The course, while built for speed, offers subtle risk/reward scenarios on each of the links-style holes, with water, sand and gnarly desert scrub waiting to eat an errant or ill-conceived shot. In the off-season, you can have this private-club-caliber golf challenge for around $20, and even less if you find a deal on Web sites such as www.golf602com. And you can often bag 18 holes in three to four hours. Also, yearly memberships can be had for around $1,000, which includes unlimited driving range balls. For a golf nut on a budget, this is an incredible deal.

On the Dinosaur Course at Gold Canyon Golf Resort, central Arizona's most spectacular mountains are on full display as you play one of Arizona's most impressive golf courses. Nowhere else do you feel like you're getting the vistas you'd find on a long, challenging hike when you're actually in a golf cart. The Dinosaur Course, simply put, is a unique sport-and-aesthetic experience that shouldn't be missed. If you can, try to hit the final nine as the golden hour of evening approaches. Nothing in golf compares.