BEST PLACE TO BUY YOUR BEST GIRLFRIEND A BIRTHDAY GIFT 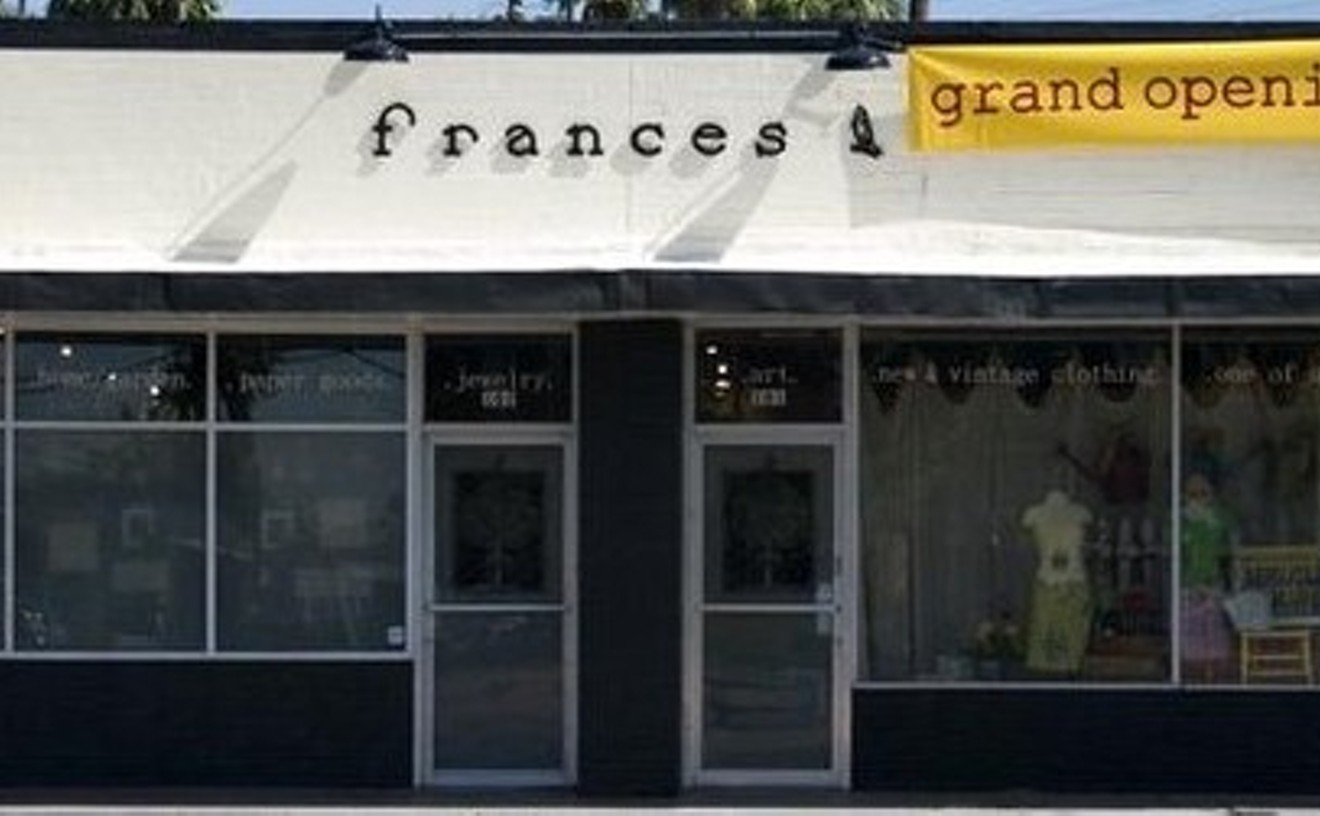 So your BFF's the big 4-0? Get over to Frances, ASAP. We've said it before and we'll say it again — this is the shop we'd open if we could open a shop, only the owner has way better taste. So we're content to browse the super-cute tables, packed with body products, garden supplies, jewelry, and a mix of new and vintage clothes. Make sure you check out the back room, but don't take that butterfly-covered coat we've been eyeing, or any of the vintage cowboy boots. We love Frances so much, we've had to put ourselves on a budget, which is why a girlfriend's birthday is the perfect opportunity to shop. No joke — we were at a friend's 40th not long ago, and at least half the packages on the gift table bore the telltale Frances label. Guess there are some benefits to getting old...

BEST PLACE TO FIND WHAT SHOULD BE ON MILL AVENUE

In recent years, developers by the dozen have sunk serious sums into Mill Avenue and downtown Tempe with the hope that ASU kids and other hipsters will spend their hours and (more importantly) their dollars at its ultra-corporate chain stores, restaurants, and nightspots.

Too bad for them that the gnarliest place around these parts ain't even on Mill Avenue at all, but rather an unpretentious strip mall at Ash Avenue and University Drive.

This countercultural complex of cool boasts an array of independently owned alt-friendly business offering satisfaction for all your senses. Pick up the latest issues of X-Men and Spider-Man at Ash Avenue Comics & Books, followed by a search through the bins of Eastside Records for used vinyl, or a hunt for secondhand chic at the Buffalo Exchange. If you're hungry, Otto's Pizza has plenty of fresh slices and subs for noshing, and El Pollo Supremo serves up inexpensive dishes of delicious mesquite charbroiled chicken and sirloin strips with warm corn tortillas. Wet Paint Art Supply has plenty of pigment for artistic types, while the Headquarters has all your... er, tobacco-smoking supplies, HTC has a piercing studio on the premises, and Cowtown Skateboard features equipment fit for tricking.

BEST PLACE TO RENT A FOREIGN FILM ? FOR FREE 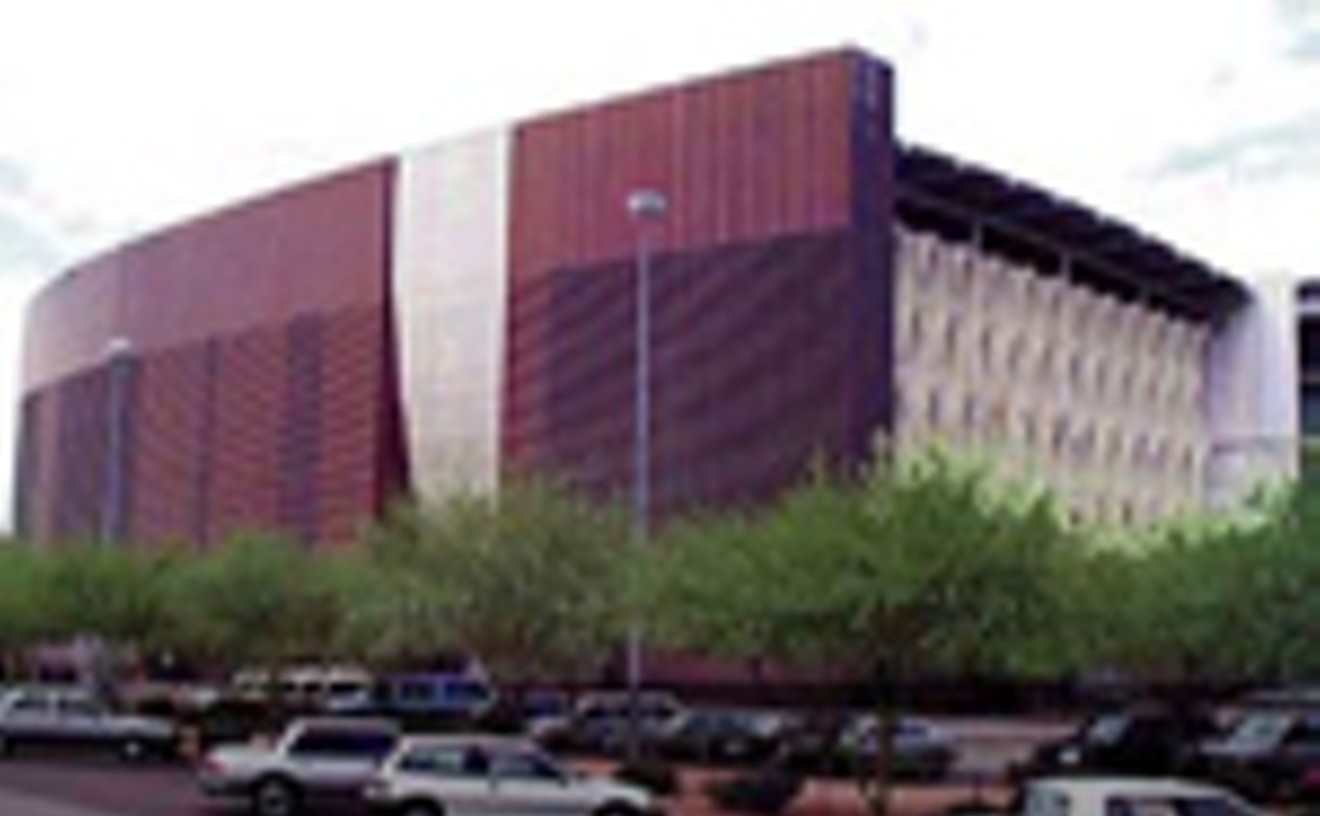 Smack in the center of the first floor at our biggest library sits a stunning collection of foreign and American classic films in both DVD and VHS format that rivals that of any retail store we've ever frequented. Literally hundreds of movies are available to anyone with a library card, the time (they have to be returned within a week), and the curiosity to watch them. The masters — Federico Fellini, Ingmar Bergman, Luis Buñuel, Akira Kurosawa, Jean Renoir, Jean-Luc Godard, and (we can't resist) Charlie Chaplin — are awaiting you. If you don't know who these fellas are, you're missing out.

Unless you forget to return your items on time, the price is right. So forget the old Chevy Chase flick or Animal House for the umpteenth time, and give La Dolce Vita or The Rules of the Game a gander, courtesy of one of our greatest institutions, the public library. 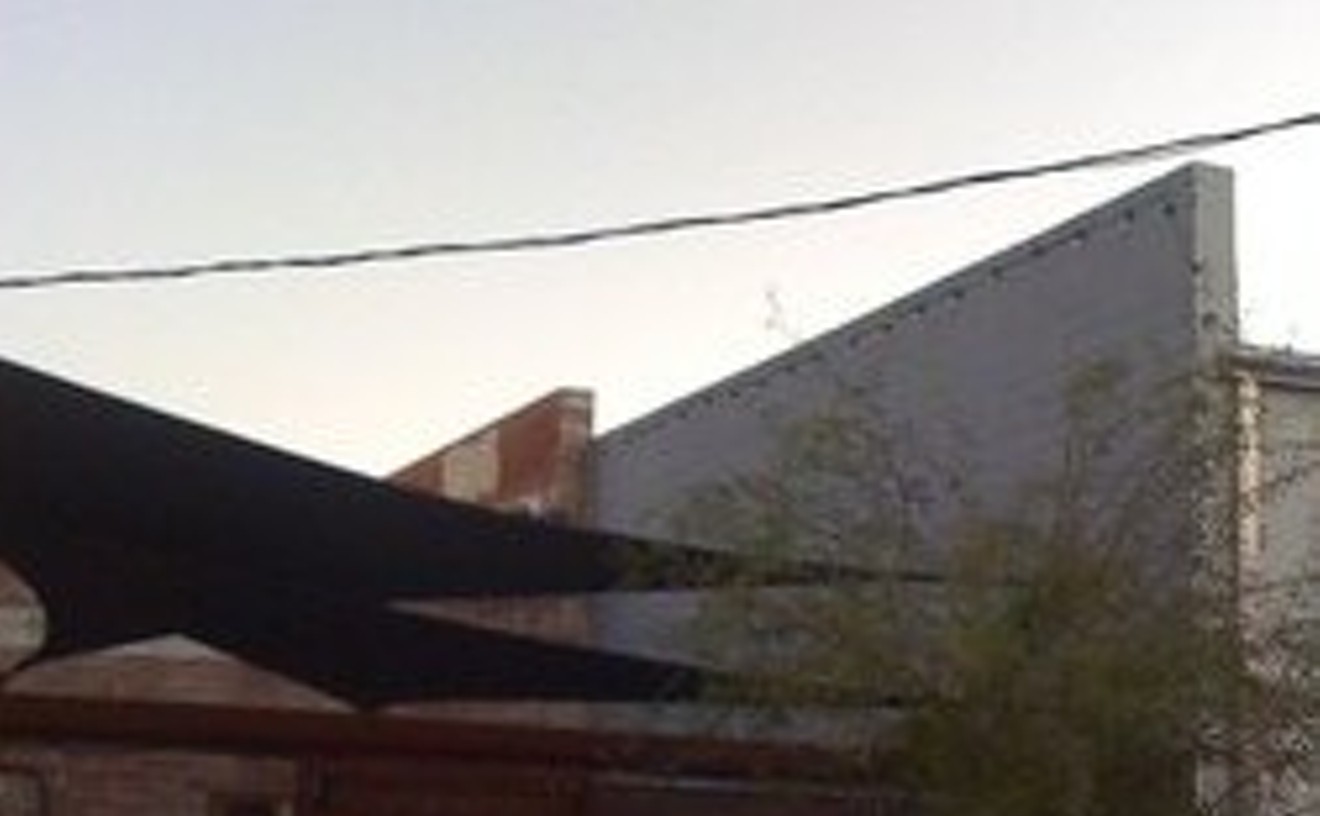 Kimber Lanning continues to run our favorite CD shop in Phoenix. No, you probably won't find Barry Manilow's greatest hits in this small outpost of indie music. That's what Borders is for. Or even, dare we breathe it, amazon.com. Stinkweeds is where you go if you want to stretch your taste, and Lanning and her staff are up to the task, offering an edgy selection of rock, pop, hip-hop, freak folk, and more (check out the listening stations to hear what's hot). The latest by The New Pornographers? Now that, we bet they have. It's probably playing in the store right now.

BEST CD STORE ON A BUDGET 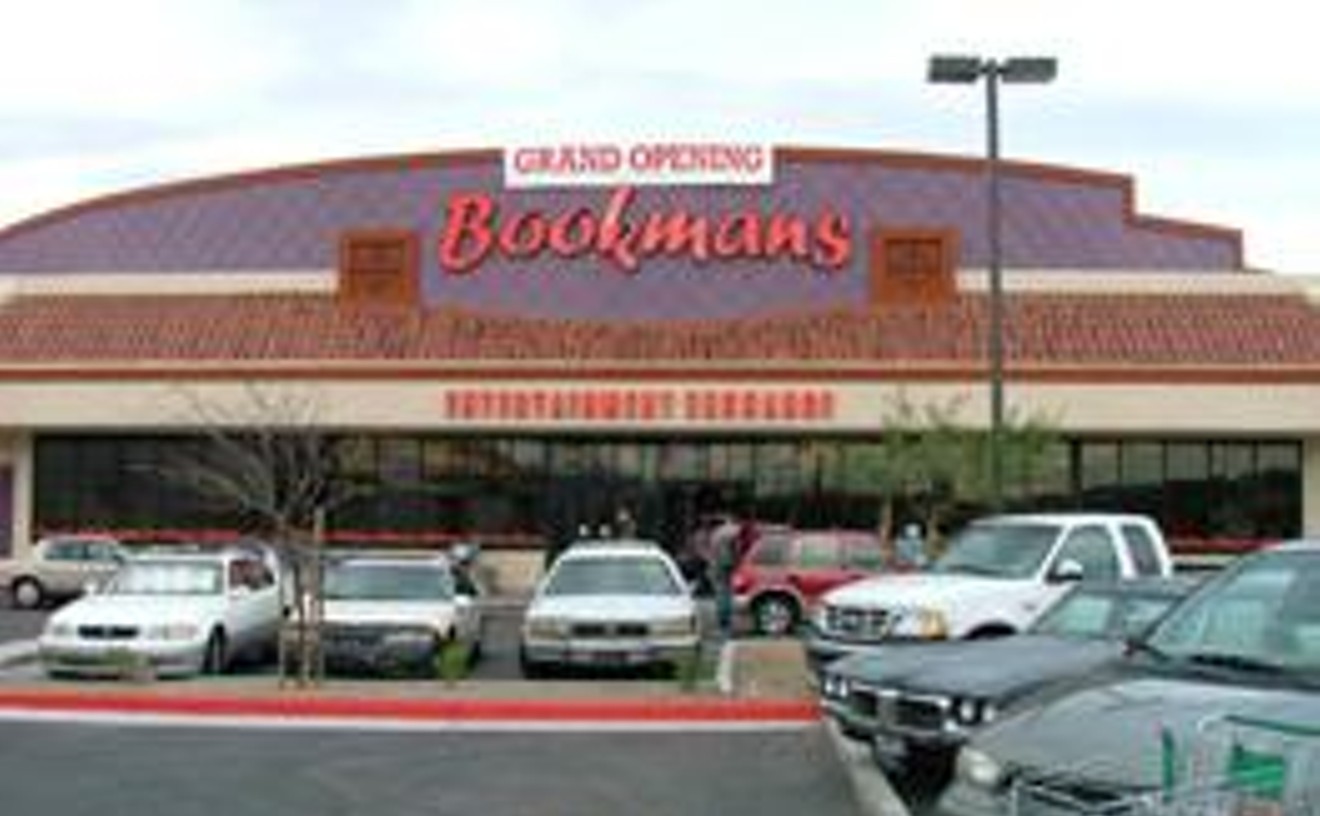 Our music collection is taking over our home ever since we discovered Bookmans. The mammoth store is just as cozy as our favorite ma-and-pa bookshops, thanks to friendly, little reading-and-relaxing nooks scattered all over the store, but we find ourselves lately heading straight for the colossal CD department, where gently used music of every stripe can be found, sampled, and (much to the chagrin of our groaning CD shelves at home) purchased.

Prices range from $3 to $10 on most single discs from a full range of musical styles. We snagged a CD reissue of Dean Martin's Christmas with Dino, the new Skinny Puppy, and a collection of Sesame Street songs covered by rock singers, all for less than $20. Listening stations make for no-risk shopping, and free Wi-Fi access means that, while we're scouting out that B-52's box set, we won't have to miss a single incoming e-mail.

We usually sneak over to the DVD and special-purchase collectible music sections while we're at Bookmans, because they, too, are overflowing with amazing finds at incredible prices. Probably, we should take advantage of Bookmans' generous trade-in policy by swapping some of our less-favorite CDs, but with prices like these, we'd just as soon hand over a handful of dimes for a lot of cool music.

Forget eBay. Vinyl junkies who want that rare record — in mint condition and at a fair price — need to stroll down Memory Lane.

Looking for a quadraphonic, 180-gram vinyl pressing of Johnny Cash Sings Hank Williams for your cowboy cousin? It's here. Gotta get that double-LP picture-disc import of Iron Maiden's Matter of Life and Death for your metalhead man? They've got it.

Need a copy of ex-model Twiggy's 1971 LP The Boy Friend for, uh, some reason? They've got that, too.

Memory Lane's stock is 100,000 records strong, encompassing every genre, including sports and punk (big cred for carrying an Italian import picture-disc of influential U.K. hardcore punks Discharge's 1981 Never Again EP). But discerning collectors will really appreciate the store's grading system, which is informed and accurate, unlike many sellers on eBay.

Memory Lane's grade scale for the condition of its records ranges from G ("Good," which means there is audible damage to the record) to M ("Mint," which means the record is still factory-sealed), and the grades are honest — if there's a tear or a promo stamp on the cover, they say so.

With its comprehensive stock, detailed grading system, and bargain prices, it's no wonder Memory Lane's been in business more than 22 years. 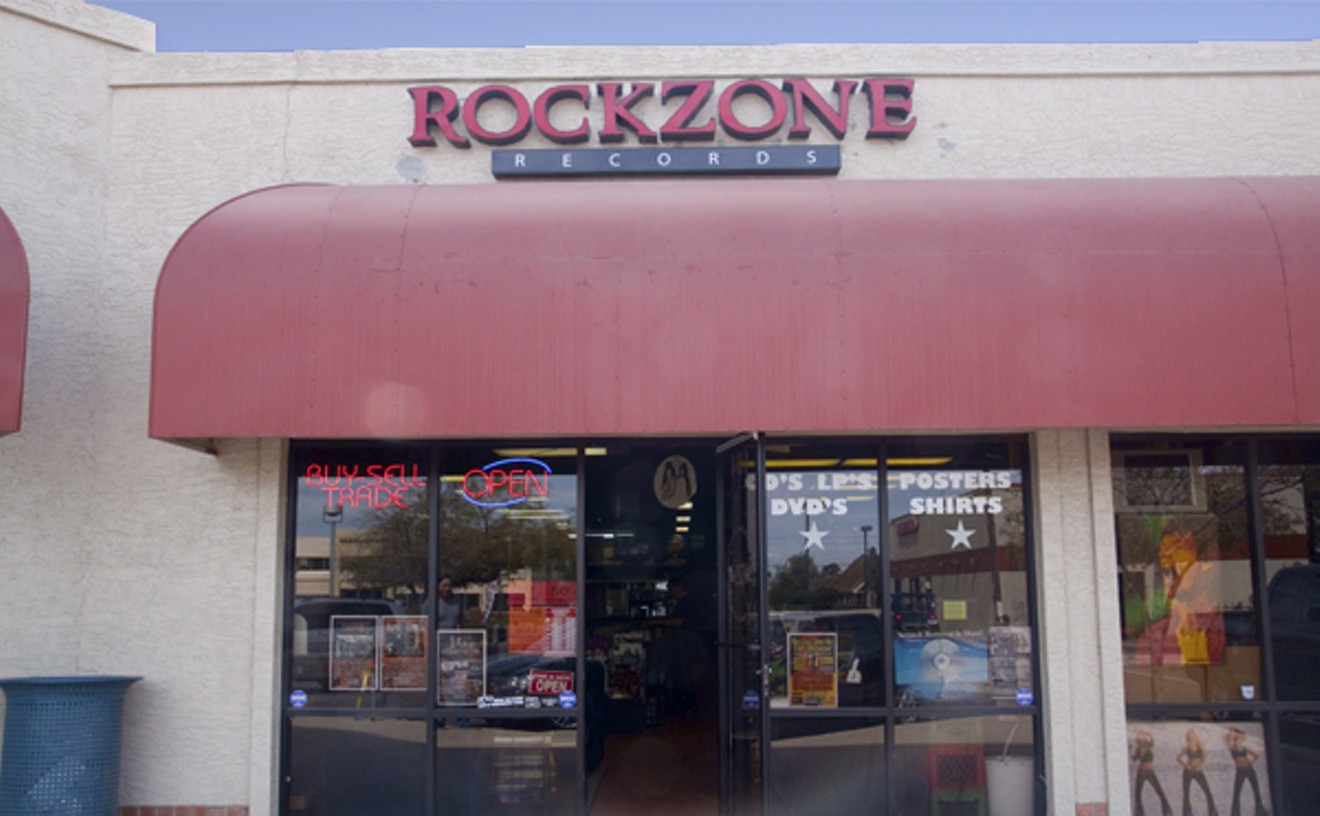 It's not easy for vinyl-focused shops to stay afloat these digital days. Just look at Mesa's mainstay Rockaway Records, which closed up shop after 22 years. No worries, because Rockaway's longtime owner simply sold the inventory to new management, who, in early 2007, quietly reopened the store in south Tempe.

A number of Rockaway's familiar faces are happy to help you navigate the stacks of used CDs, DVDs, and video games, and when you buy any used CD, a staff member will run the disc through an industrial-strength cleaner that removes all dust and most scratches, thus guaranteeing a skip-free ride home.

Our favorite day to shop at Rock Zone? Sunday.

Vinyl Sundays features 15 percent off any record as well as $1 records slashed to a measly 75 cents.

Attention, vinyl nerds and compact disc geeks. You now have another outlet for your music-collecting obsession whenever musician James Fella performs a music space or a house gig in downtown Phoenix and Tempe. Fella, a member of Soft Shoulder, Tent/City and various solo and group noise projects, sells hand-picked LPs, seven-inch records, cassette tapes, and CDs wherever he plays. The selection ranges from the mainstream, such as Led Zeppelin, Frank Zappa and Pink Floyd, to the experimental, like Iowa noise rockers Raccoo-oo-oon, The Flying Luttenbachers avant-garde project, and NYC-based hardcore jazz ensemble Zs. Fella also stays busy as founder of independent label Gilgongo Records, which specializing in releasing creative, improvisational music to the masses. You can also shoot Fella a line to reserve desired albums online. 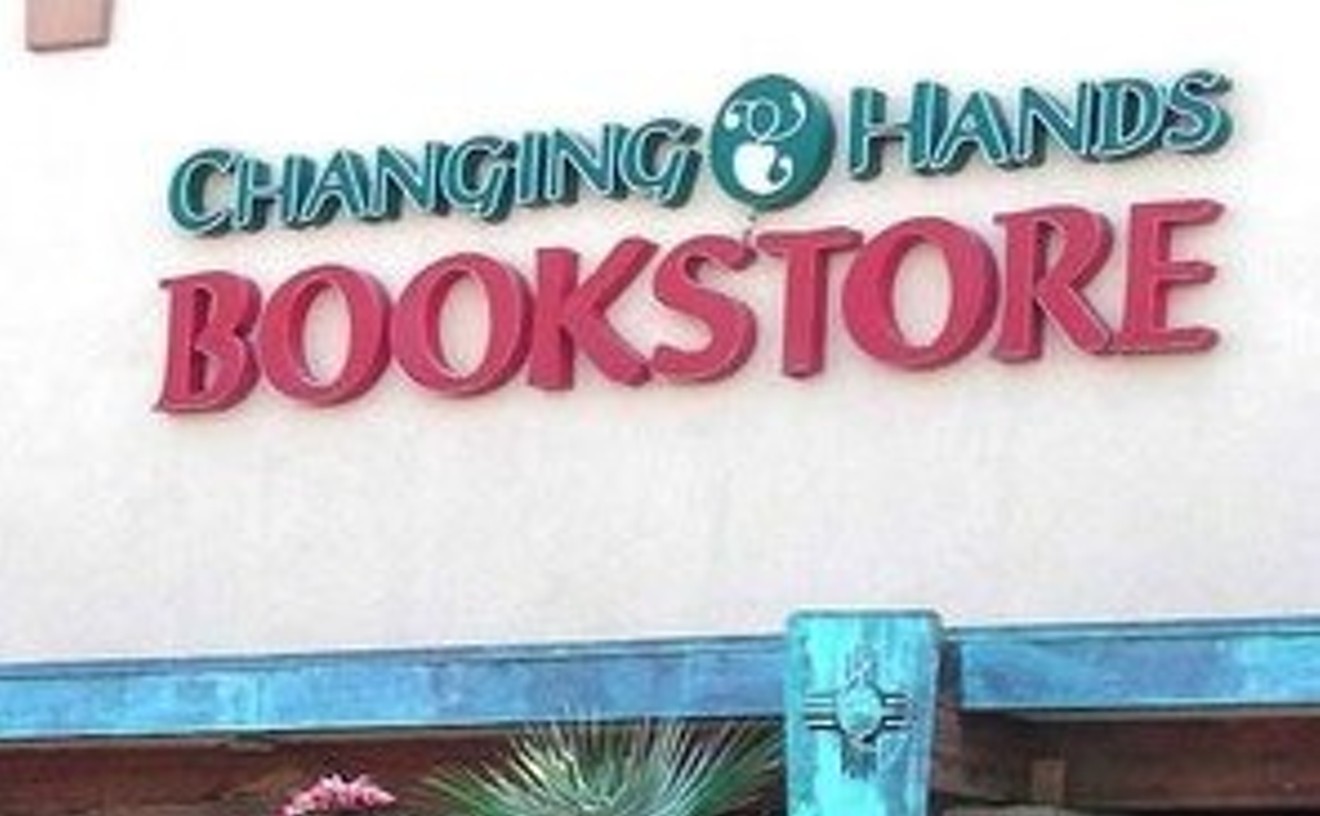 In an era when brick-and-mortar bookstores are considered quaint and sort of inconvenient, we're gratified that Changing Hands continues the tradition of wonderful old book shops of yore. Really, you know us — we don't give a hoot about what anyone else thinks. But we were happy earlier this year when Publishers Weekly named Changing Hands Bookseller of the Year.

About time, we say. Now the rest of the world knows what we've known for years.

Besides offering the best in new and used titles, our favorite bookstore has created an entire community around authors, booksellers, and readers that truly feeds the souls of those of us who care about good writing and good reading. Besides the many cozy nooks for getting to know a book before you buy it, Changing Hands offers book groups, writer's workshops, and readings from authors both local and national. Groovy gift items like candles, stationery, and book lights and the adjacent Wildflower Bread Company are two more in a long list of reasons why we're glad to keep "visit Changing Hands" on our "to do" list.

Our only complaint — again: When're you opening your downtown Phoenix location? Huh? Huh? 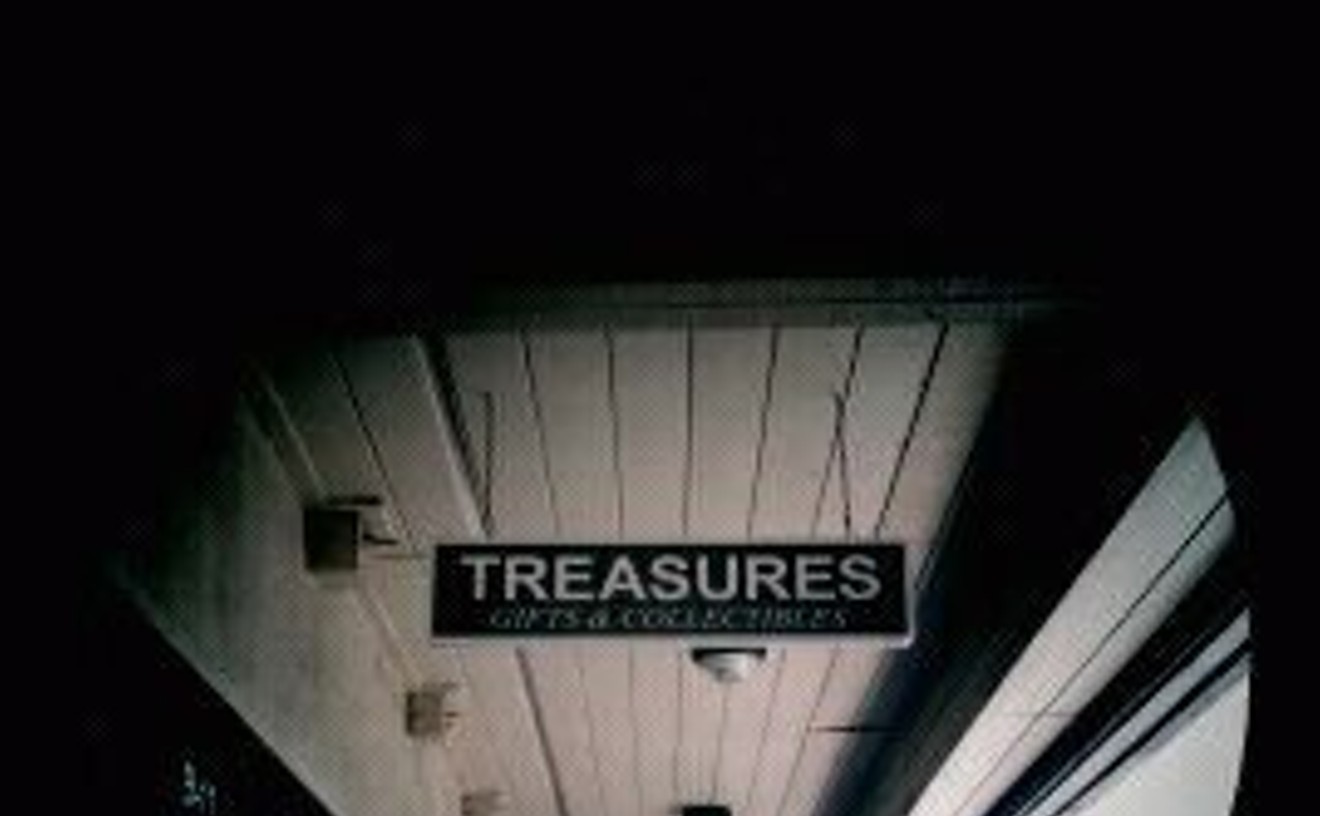 It says something about us all that a store that sells the contents of abandoned storage units has so many books. But they were cherished once, and the folks at Toys, Books & Treasures make sure they'll be cherished again. Pick your way past the porch full of furniture, the racks of old cassette tapes, and shelves crammed with vintage toys and sad, personalized mugs, and you'll find what we think of as VNSA training camp.

Did your neighbor move to Fresno with your favorite bathroom trivia book? There's probably a copy here. Do you have an in-law with an esoteric hobby or pursuit? Grab a year's worth of gifts for that weirdo — yes, the books are sorted by subject. Ooh, a Little Golden Book for the kids. (Yeah, right, the kids.) And while your selections are rung up at the counter, try to resist that rare collectible tree ornament. Just try.