Best Artist Who Colors Outside the Lines 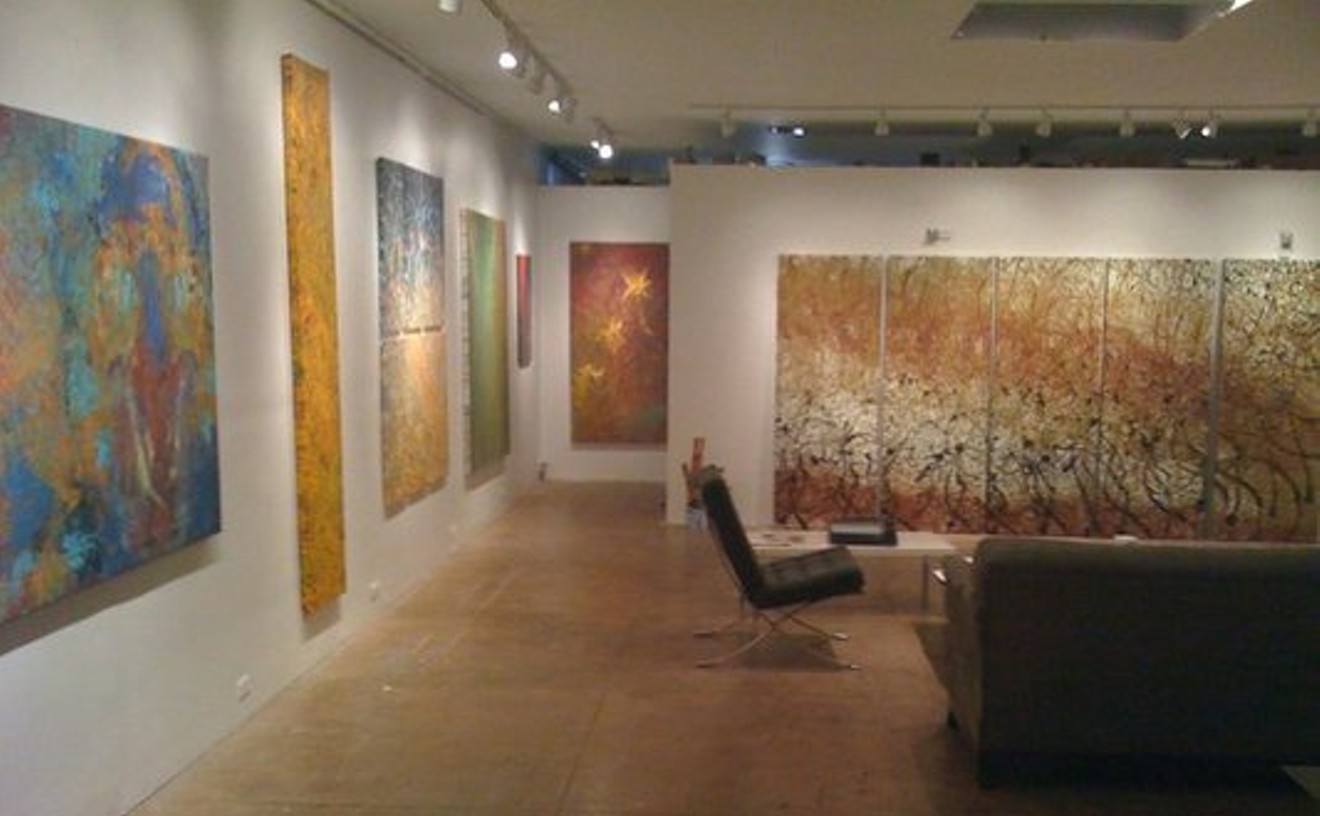 Oh, how we envy local artist Kyle Jordre. He stumbled onto his true passion when he decided a large blank wall in his former apartment needed a Jackson Pollock-style treatment. A couple of canvases, brushes, and gallons of home improvement store "oops" paint later, Jordre quit his job teaching sixth-grade social studies to follow in Pollock's footsteps. Now, as he says, "there are no rules." Jordre lives and works out of a small vintage building on Grand Avenue and manages to draw enough income from his colorful splatter paintings to pay the rent. He makes his own "brushes," using bottles and wooden spoons, and uses objects such as hollow core doors, denim jeans, and glass vases as canvas. "I'll paint anything," says Jordre. "I gotta make my living somehow!" Jordre Studios is open only for First and Third Fridays, but fans can contact Jordre to schedule a personal tour with the artist or peep his works (and a pair of his paint-covered shoes!) at the new Sunrise Mountain Library in Peoria.

In the past year, zombies invaded our movie theaters (Quarantine), our bookstores (Pride and Prejudice and Zombies), and our clubs (Zombie Prom). Now, the undead have chewed their way into the local indie crafts scene. When her writing prospects dried up, Erin Glaser started making zombie sock puppets for extra cash. The rainbow-colored critters with glittery red dried "blood" and crazy beady eyes caught on, and now you'll find them on Etsy.com and at local shops like Fetish Falls and Red Hot Robot. Admittedly, the critters are adorable. But even more than we like the artistry, we celebrate Glaser's good business sense in designing a ridiculously easy-to-make craft project that takes full advantage of the zombie craze. She's managed to churn out and sell well over 1,200 of these things. What's so special about a bloody sock puppet? They're cute, cuddly, handmade, and customizable. Oh, and they're available in bulk, which means if you're dying to make an indie film starring 100 drooling, creepy sock puppets, you won't have to make 'em yourself.

Ma$e isn't technically a local boy, but Puff Daddy's former protégé is in town once a week to preach at the church he's starting in central Phoenix. The "Mo Money Mo Problems" rapper converted to Christianity at the height of his popularity and, after laying low for a few years, started a church in Atlanta, which is making its first expansion to Phoenix. The preacher, now going by his given name, Mason Betha, describes the spiritual temperature of the Valley of the Sun as "lukewarm," saying locals are lulled into complacency by their leisurely desert life, and he hopes to change that. A decade after willfully fading from the public consciousness, Ma$e still has the sort of unbridled charisma that makes you feel honored he decided to pursue his life's work in Phoenix, even if he chose it partly because he likes our palm trees.

On any given weekend night on any given corner of Mill Avenue (most often, its Fridays on Fifth and Sixth streets), Christian groups gather to preach through microphones and pass out church tracts. Theyve been doing it for several years, but in the past year or so, theyve been challenged by Valley atheists, who set up microphones on the same corners to protest the Christians witnessing. The atheist protesters run the gamut from disheveled college students blasting black-metal music to the dramatic Omar Call, a former Mormon missionary who carries a sign saying "I Quit" and does theological battle with a megaphone. He even has dressed as Jehovah. Who wins the debates is up for debate, but one things for certain: It sure is entertaining to watch.

Best Rebel Stickin' It to the Man

Fronzo West has a rap sheet so big you could tie it around City Hall, like a giant bow. And he has a car emblazoned with the motto he lives by, "Fuck the police." And if you're guessing that the former is caused by the latter, you ain't too far off. He also writes his special message to gendarmes all over his clothes, too, in case his jalopy doesn't drive home the point.

Better known simply as "the Fonz," West's clothing and car are akin to waving a red flag in front of a fire-breathing bull in one of those old Bugs Bunny cartoons, at least when it comes to the police. And the fact that the Fonz often considers himself to be out "on patrol" with his video camera looking for police malfeasance doesn't endear him any further to law enforcement. What happens when the police see him is fairly predictable: The cops stop the Fonz and begin to ask questions, to which he does not reply. As soon as they lay hands on him, he performs the patented "Fonz flop," whereby he lays down in front of them peacefully, "pulling a Gandhi," as some have called it.

Inevitably, Fonz then gets arrested on a bogus charge and ends up spending time in the hoosegow or performing community service as a result. Not that there's a law against saying, "eff the po-po." In fact, it's constitutionally protected speech. But "the man" don't see it that way, and the Fonz, a Navy vet, has vowed never to give in.

They are just about the last people in the Valley who would want such a honor, but Phoenix's police chief — make that public safety manager — and his wife, Deer Valley Unified School District's associate superintendent, are eminently deserving of the phrase "power couple."

Jack, of course, has become the devil incarnate to many in the anti-immigration set, the personification to pandering politicians, demagogic union leaders and flat-out nutballs for everything wrong with "liberal" law enforcement. Liberal? This unassuming old west Phoenix boy rode motorcycles and walked the streets of his hometown for years before climbing the ladder to the top of his profession. The guy is as hard-nosed as it gets, except he happens to believe in the rule of law, not of the mob.

Quietly, Connie has been an effective big shot in local education for more than 30 years. She was the first woman president of the Arizona Interscholastic Association's board of directors and in 2007 won the Pat Tillman Community Leadership award in the category of Lifetime Achievement. Connie also won a fight with breast cancer a few years ago. These days, she mentors fellow breast cancer survivors and regularly participates in walkathons to raise money to fight the disease.

The Harrises are out there in our community every day, doing what they think is the right thing to make it a safer (in Jack's case) and better-educated (in Connie's case) place to live. That's powerful stuff.

It's not as if things were perfect in 2008. But let's face it: The squabbling we endured at the state Capitol last year was bliss compared to the budget bloodletting that's proved necessary in 2009. We're not accusing of her doing it on purpose, but it's kind of amazing how Janet Napolitano blithely walked away from the governorship, and Arizona, just as the economy literally ground to a halt — and all the spending she encouraged suddenly caught up with us in a big way. Democrats were livid at Napolitano for jumping ship and giving the state over to Republican Jan Brewer, but the move had the kind of selfish shrewdness that's been a hallmark of Napolitano's career. Indeed, in terms of long-term damage, Napolitano's departure forced the Republicans into being the bad guys. They run everything now, but after this year's budget fiasco, their political futures may be bleak. Being the opposition party, surely, has never looked so good.

We loved Richard de Uriarte even when he wrote for the Arizona Republic's editorial page. (That's saying something, considering New Times' longtime animosity for the daily rag.) But we love him even more as the public information officer for the Maricopa County Board of Supervisors. With all the controversy that august body has been embroiled in this year, no one could blame its new PIO for going into full damage-control mode. But De Uriarte has remained true to form: He doesn't try to argue; he merely explains. He doesn't hide documents that can prove politically damaging. And unlike lesser PIOs, this former journo understands that just because a government agency is required to act if it receives a public-records request doesn't mean that it must get a public-records request just to answer a question. The Supes are lucky to have him.

Like just about everywhere else, the staff at the records room in the basement of the Jackson Street parking structure has shrunk in the past year or so. That has meant longer lines and shorter tempers at times. But we would be remiss if we didn't tip our caps to the clerks who quietly labor behind the counter there five days a week. They are attentive, efficient, helpful, and smile easily. The latter isn't necessarily part of the job description, but it sure does make life easier and more pleasant for all concerned. But, hey, county people, they've got more than enough on their hands at the moment. Please, please don't make any more cuts down there!

Ana Garcia, a sophomore at a Phoenix-area high school, surely didn't mean to set off a public firestorm when she sent a quick e-mail to State Senator Linda Gray. Garcia was simply asking the Legislature not to cut funds for education. But Gray — who clearly didn't realize she was dealing with a 15-year-old with learning challenges — dashed off a snooty response upbraiding Garcia for her bad writing skills. "You should be ashamed of displaying such ignorance in writing to a public servant," the Republican legislator wrote. "Perhaps you watch too much TV or don't know how to speak proper English." Or could it be that perhaps not every student is blessed with the ability to score 140 on an IQ test? Suffice it to say the exchange got out and things got crazy. The lefty Web site DailyKos went ballistic; Gray was forced to apologize to Garcia; plans were made for the senator to visit the student at school and take a look at the programs she was attempting to cut. And thanks to Linda Gray, we all learned a bit more about thinking twice before hitting "reply."