Three words regarding Alexis Hamilton: Girl. Can. Walk. Not in the everyday, putting-one-foot-in-front-of-the-other sort of way. No, it's more of a pretty-sure-she-could-win-Top Model type of vibe. And Phoenix's fashion scene is all the better for it. When Hamilton powers down the catwalk, it's damn near impossible to not think of Naomi Campbell. Named Phoenix Fashion Week's model of the year in 2011, Hamilton continues bringing garments to life on the runway. Doesn't matter if they're impeccably crafted gowns or poorly executed pieces, Hamilton's look and energy are immutable. 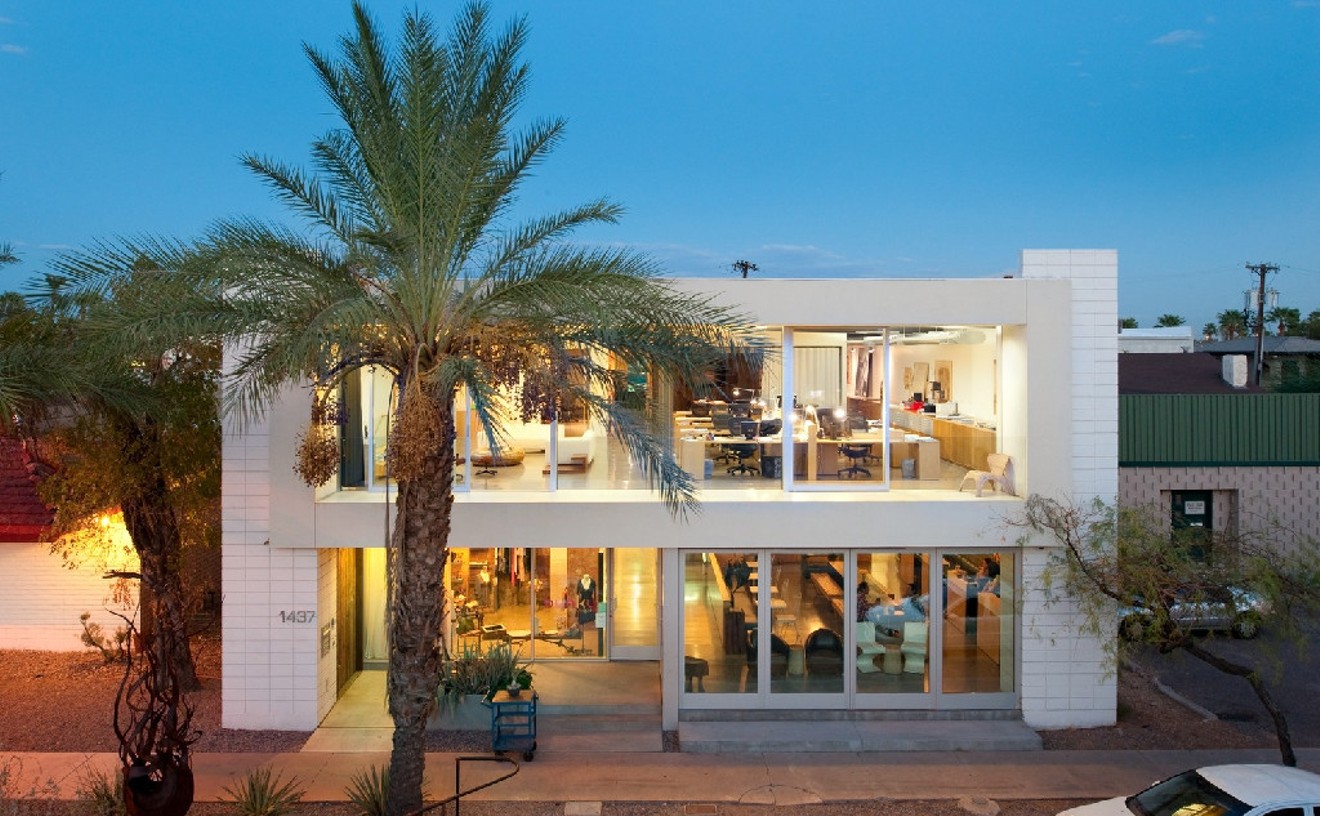 Bunky owners Rachel and Jim Malloy and artist Joseph "Sentrock" Perez go way back. Sentrock, a Phoenix native based in Chicago, came to Bunky looking for a new shirt to wear to his first-ever exhibition opening. In the seven years since, the Malloys and Sentrock have stayed tight, with the pair supporting the painter's burgeoning career as both muralist and studio artist. Now, they've collaborated on a fashion-meets-art project that pairs Sentrock's bird city character with wearables like shirts and hats. Talk about wearing your art on your sleeve.

Phoenix Fashion Week 2013 opened with a bang. The annual style outing brought together emerging and established designers to show off their wares. But local fashion icon and boutique owner Robert Black brought to the runway something a bit different. He styled pieces from his eponymous shop with a Southwestern flair that frankly set the bar a little too high for the work that followed. Still, bringing in one of Phoenix's most established and treasured institutions to its not-quite-established annual fall fashion week brought increased credibility to the event. But we sure felt bad for the designer who was up next.

The Creative Center of Scottsdale, an eco-friendly co-working space set to be completed later this year, is a collaborative project by owner/photographer Michelle Pelberg-Biely and green designer Christina Noble of Contour Design Studio. The idea is inspired: a social hangout and networking hub for local creatives. In addition, this 6,000-square-foot property, formerly the home of a gun supply store and an auto body shop, will be the first in Scottsdale to uphold the International Green Building Code. Put all that together and The Creative Center carries a word not often found to describe life in these parts: sustainable.

If you've been to Sweet Republic for ice cream (and who hasn't?) you know that ice cream maker Helen Yung has great taste — from the Toffee Banofi sundae to every sweet detail in the new Central Phoenix outpost of the tiny ice cream empire she and business partner Jan Wichayanuparp run. From time to time, Yung does post ice cream-related images on Instagram, but more often than not, she's sharing amazing shots of the Asian food she seeks out around town. If you want to know where to find Yung's favorite dim sum or her latest veggie discovery, follow her on Instagram. And if you ever meet her or catch a glimpse of her on IG, you'll wonder where on earth the diminutive Yung puts all that food.

He's charming and funny, and if you aren't lucky enough to know Robbie Sherwood personally, you can follow the political consultant on social media. His posts are newsy, smart, and entertaining — and he never takes himself too seriously. Hey, Robbie, maybe you should run for public office!

It turns out that it's completely possible to be a member of Congress without being desperate for attention, and it's not actually a requirement to make constant appearances on Fox News or MSNBC to blame all of society's ills on President Obama or Republicans in Congress. Democratic Congressman Ed Pastor is proof of this, retiring this year to end a 23-year run in Congress. Pastor is what a congressman is supposed to be — someone who gets things done instead of someone pretending to be working by constantly complaining in the media. In other words, the opposite of Senator John McCain. Pastor's credited with securing federal funding for things like light-rail and airport improvements, as well as expanding health insurance for children of low-income families in Arizona after the state's program suffered massive budget cuts at the hands of the Republican-controlled state Legislature. Congress could use quite a few more people like Ed Pastor.

In a state where Democrats are an endangered species, Ruben Gallego is a liberal's dream candidate. He's a Harvard graduate and Iraq War veteran who's fought hard for every progressive cause as a state representative, from marijuana legalization to supporting a recall of Sheriff Joe Arpaio. After just four years as a state representative, Gallego ran to represent the Phoenix area in Congress — and won his primary handily, beating longtime political operative Mary Rose Wilcox in August. His wife, Kate, is no slouch, either — and certainly not a typical politician's wife. She's also a graduate of Harvard (that's where the two met) and won a hotly contested seat on the Phoenix City Council in 2013. They're such dedicated Democrats that Ruben actually proposed to Kate at the 2008 Democratic National Convention. Even in a Republican hotbed, these Gallegos are going to be around a while.

One of the best features of many blogs is the ability to comment anonymously — unless someone figures out the identity of the person behind the comments. That happened this year to state schools Superintendent John Huppenthal, who commented on a progressive blog as Falcon9, Thucydides, and Socrates. It turns out that Huppenthal, the guy elected to run the state's public schools system, made comments referencing that President Obama was born in Kenya, that FDR was responsible for the Great Depression and the rise of Adolf Hitler, called food stamps recipients "lazy pigs," and suggested a ban on anything in Spanish, like radio stations, billboards, or Mexican food menus. When caught, he cried about it. Gee, ever wondered why metrics on education always rank Arizona's public schools system near the bottom? Arizona voters wised up and voted him out in August's primary — sending Huppenthal to cry on someone else's shoulder.

Why did Arizona Attorney General Tom Horne stay alive so long — politically speaking? Hey, don't blame us. New Times was the first to tell the public that Horne had hired his mistress to a top post at the AG's Office for a six-figure salary. Horne then ordered an internal investigation to cover this up. His investigator found evidence of lawbreaking. This led to an FBI investigation and a finding by two county attorneys that Horne violated campaign finance laws and must pay back $400,000 to contributors. Since then, Horne's been accused of illegally running his re-election campaign out of his public office, and he is the subject of investigations by four entities, that we know of. In any other state, Horne would have resigned by now. But still, he staggered forth, zombie-like — even refusing to concede when Republican voters finally killed him off in the state's primary.