Best Place to Learn to Stilt-Walk

Ever wanted to make like Jimi Hendrix and kiss the sky? House of Cirque can help you slip the surly bonds of the earth with their high-flying stilt classes. The performance-art troupe hosts circus art classes and workshops where they teach skills like fire-eating and stilt-walking. Headed by Crystal Cruz, the instructors are human giraffes who are skilled at teaching stilt-virgins how to stand on their own two feet. Starting off with classes in a mirrored living room (complete with stripper pole for added balance), stilt classes quickly move outdoors into the streets and parks of downtown Phoenix. Padding and stilts are provided. And when the troupe isn't teaching stilting, they're doing it: They regularly show up to stilt at parades around town, as well as host stilt variety shows and circus events at venues like Alwun House and Unexpected Gallery. They even stilt onstage for the annual All Souls Procession in Tucson, standing on stilts that look as tall as lampposts.

Here's one for the "What could possibly go wrong?" category: Tempe now has its very own ax-throwing range. Actually, it's pretty fun: You get a group of 18-or-older friends together (or you can just come by yourself), and after a short briefing on proper throwing techniques, you're ready to let out your inner lumberjack. It's kind of like a shooting range, with wooden board with bullseyes rather than paper targets. And actually, it's pretty low-risk: There are strict safety rules that every participant must follow (for example, no open-toed shoes). You're not allowed to BYOA (bring your own ax), but after 4 p.m., you can BYOB. Beer and axes: what a magical combination.

When a city puts up a sign like "Use Caution, Active Bees in Area," the bee-sensitive among us (as in most people) tend to go on yellow alert. These signs, which you can find at at Camelback Mountain, shouldn't be taken lightly. Killer bees live up to their name in metro Phoenix, where they've nailed several young hikers in local mountain parks. As recently as 2016, a 23-year-old man hiking Maricopa County's Usery Park was stung to death. But as usual, Camelback Mountain, the popular and over-used landmark in east Phoenix, wins out for the craziest tragedies. In 2004, and again in 2012, young men climbing the cliffs in Echo Canyon slipped and fell in the panicky minutes after a swarming attack began. Another climber in 2009 received 120 stings. Hikers on the main trails aren't usually the victims. But they could be. We've got bees on the brain because this year we heard bees while hiking Echo Canyon. No bees were in sight, but their frightful sound came suddenly, airplane-loud. A swarm was on the move. Hike or climb to Camelback's less-visited spots, and you just might find it.

Best Place to Shoot Guns in the Wild

This is a terrible place to hike or ride a mountain bike, unless you're training for war. Because that's what it sounds like out here — a war. While dangerous as hell to go walking around the hills, Sugarloaf Road, a.k.a. Forest Road 402, a.k.a. Sugarloaf, is the perfect place to fire off an AK-47 or .357 Magnum, and no stuffy rangemasters to tell you to stop the horseplay, or not to shoot if someone's downrange. It's one of the most popular places to shoot outside of a shooting range in the east Valley. It's so close to civilization that it's best to get there early, and on a weekend day, very early. If you go later, expect to drive farther down the dirt road then you wanted to. But it's a large desert, and if you keep driving, you'll probably find a cozy nook all to yourself. Be sensitive to cactus and pick up your shells, but don't worry too much about the environment here. As you'll see, nearly everything's been blasted to bits already, except the scrub brush and larger boulders and hillocks that make such good backstops for bullets. People have been shooting on federal land in the Arizona desert for decades. If you have a gun, you can still do it at Sugarloaf. But one more recommendation: Do it soon. In our opinion, the Tonto National Forest is likely to close the place to target shooting, like they've done in other areas that got too popular with the firearms set.

This may be an obvious note, but sometimes sunsets look best on the water. Aside from the many manmade meres in local neighborhoods, the only sizable body of water in the Valley is Tempe Town Lake. Thanks to the many grassy areas, benches, lakeside ledges, and one stunning pedestrian bridge, there are plenty of places to watch the brilliant orange and pink desert sunset from this bustling city park. Caveats include having to share the scenery with maybe a boot-camp exercise class, a rowdy group of cyclists, a couple of family picnics, and about a million people out for a jog. However, you can always rent or take out your own kayak or pedal boat to get a little privacy on the lake as you watch the day end. 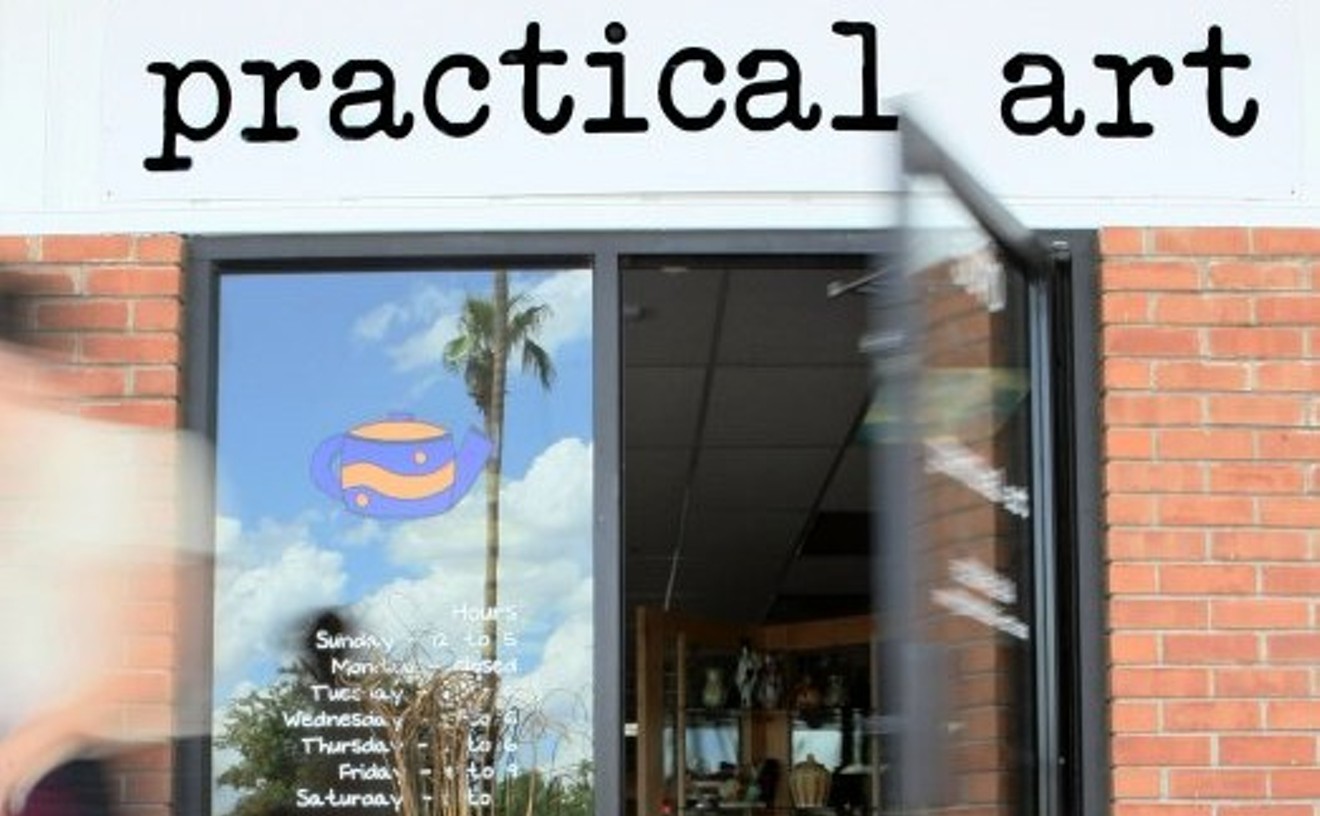 It's all about coming full circle at Practical Art, where you can actually take classes with the artists whose works you've seen sold or exhibited there. Jake Early filled a wall at Practical Art with Southwest-inspired prints, then taught a class in print-making. Laura Spalding Best showed more than 200 oil paintings on found objects, and shared her techniques for painting miniature landscapes during a class at Practical Art. The long list of artists who've taught classes there also includes Alexandra Bowers, Kyllan Maney, and Alex Ozers. Practical Art is the best place to find affordable classes with some of the Valley's best artists, in a casual, comfortable setting where building community is just as important as making art.