When you think about it, Casey Moore's Oyster House — a freaking mainstay of the Tempe bar scene — is a big place. First, you have to make a decision on where you'd like to drink — options being the inside bar, a couple of side rooms, the spacious front patio, and the back-bar area shrouded in canopies that make you feel like you're shopping in some Moroccan market. If you're arriving during the day — and we suggest you do, as the patio is dog-friendly till 5 p.m. — make your decision and order a drink, because it's about to get fun. Spot old friends, out-of-towners, obvious regulars, and students just realizing they maybe shouldn't have brought their parents here for lunch. What's more, you can couple this quality people-watching with the lengthy and well-executed food menu. Order some fried clam strips, Oysters Rockefeller, Casey's Famous Reuben, or on chillier days, a cup of Casey's homemade soup. And for every other day, there are cold drinks. 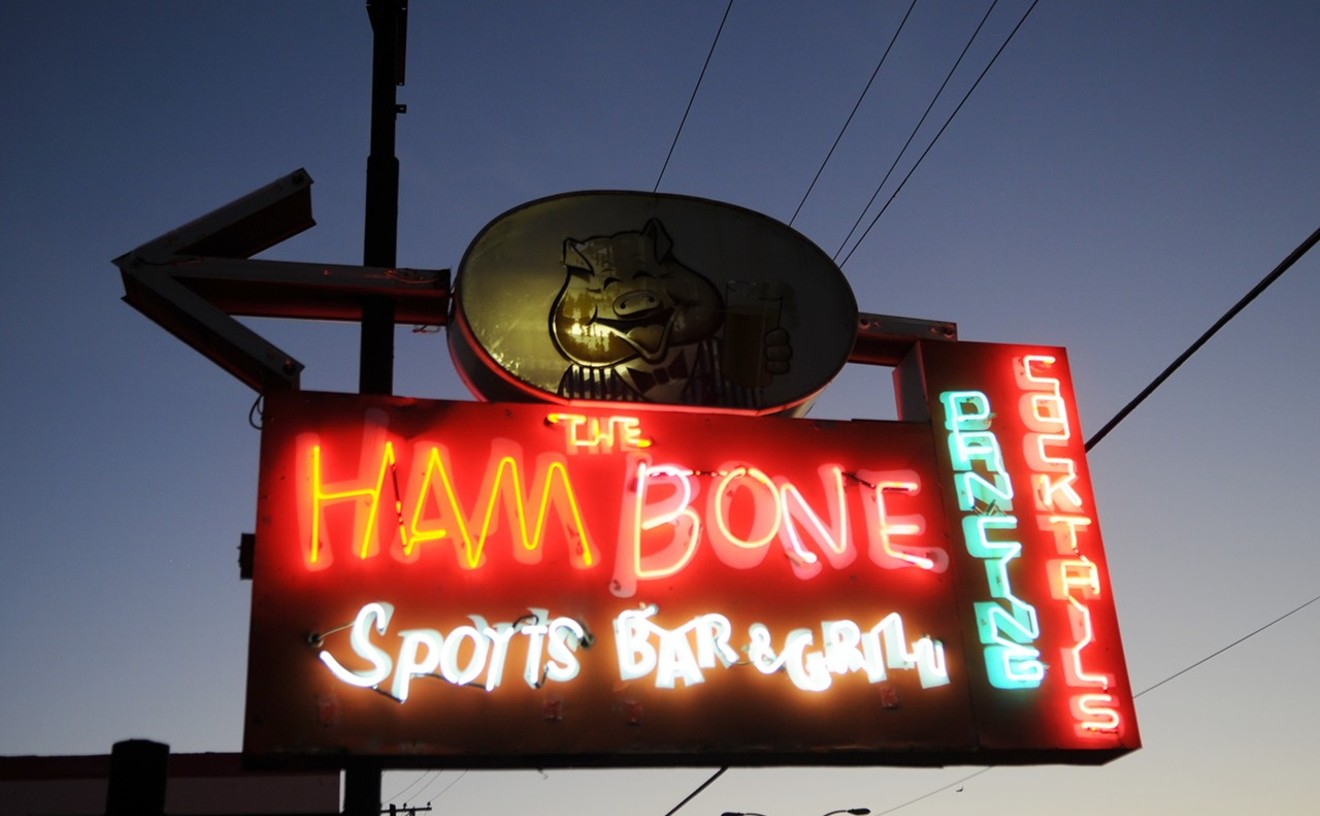 Most DJs wait forever for their big break. Chris Villa got his at age 13. In 2001, he was spotted doing turntable trickery at a local Guitar Center by a personality from Power 92.3 (now Power 98.3/96.1). It led to an appearance on the hip-hop station, and later, a full-time job after graduating high school. And Villa's gotten exponentially better since then, developing into a rock-solid selector who can effortlessly spin mixes on the fly, dominate in DJ battles, and rock a crowd. Having just turned 30, he's only hitting his stride. Good thing, too, since Villa's constantly in demand. He plays at clubs five nights a week, posts hit-getting performance videos to industry website DJcity.com, holds it down weekdays on LIVE 101.5, and works as an official Arizona Diamondbacks DJ during baseball season. He also occasionally jets off to NYC for sets on SiriusXM's Shade 45 channel or Serrato's social media platforms. And somewhere in there, he finds time to dote on his two sons, ages 6 months and 3 years. Basically, it's "can't stop, won't stop" for Villa, who wouldn't have it any other way.

The fliers made by Djentrification are as unique as one of his mixes. That is to say, they're a blend of funky, quirky, and worldly vibes, coupled with a little bit of odd and a whole lotta cool. For years, the artist and DJ has created fliers for events he's involved in (like the weekly 602'sDays party at Bikini Lounge). Each one is crafted by hand using a number of methods — including stenciling, drawing, and silk-screening — and always feature his distinctive styles of lettering that are almost graf-like in appearance. He also occasionally incorporates desert or indigenous influences, whether it's a serpentine creature winding around the letters or fashioning words in the shape of a roadrunner. Djentrification's art deserves its own exhibition, which it got earlier this year ... sorta. During AJJ's Desert Trash party at The Van Buren back in February, a collection of his fliers, prints, and other works were put on display, including the amazing poster he created for the event (natch).

The members of Gestalt Theory get hearts pounding, fists pumping, and bodies moving at many of the bigger DJ nights and dance music festivals around town. And they do it without dropping a single beat. As VJs, or video jockeys, they control the rapid-fire streams of graphics, animation, and video being broadcast over the array of LED screens onstage or projected onto walls, matching the sounds being blasted almost beat by beat. It complements and accentuates the music, amps up the energy level, and involves just as much mixing wizardry as any DJ. Watch any of Gestalt Theory's seven VJs at work, and you'll witness hands flying between laptop keyboards and control decks while unleashing visual concoctions of trippy imagery hewn from hundreds of clips. They've been dishing out this addicting eye candy at local EDM events since 2014, when local video artist and graphic designer Thomy Hoefer launched the collective after working dance parties at Bar Smith and elsewhere. Since then, Gestalt Theory's jocks have worked at Shady Park in Tempe and Monarch Theatre, as well as festivals like BOO! Arizona and Bassrush Massive. Meanwhile, Hoefer has crossed the globe with superstar DJ/producer Marshmello as his touring VJ, while other Gestalt Theory members tour with EDM artists like Ghastly, Ookay, and Slushii, helping spread Gestalt Theory's influence worldwide.

DJ Javin has only been in the scene for a handful of years, but she already has made her mark and become the best turntablist in town. Every weeknight, you can catch her scratching, selecting, and cutting with skill and style on hip-hop station Power 98.3/96.1. And every weekend, she's usually busy dominating the decks at hot spots like The District and the W Hotel in Scottsdale. In between all her gigs, Javin (pronounced "Jay-vin") can usually be found sharpening her DJ skills at home, laying down tracks for a weekly show on Pitbull's SiriusXM Globalization channel, or gearing up to open for hip-hop stars like Snow Tha Product when they roll through town. This fall, she'll head to Philadelphia to compete in the U.S. national finals of Red Bull Music 3Style DJ battle along with the Valley's Chris Villa in an attempt to become the best in the country. Her competition better be prepared, since Javin's got talent to spare.

No Volcano almost threw in the towel and didn't release their third album this year. They lost their original bassist, leaving guitarist Jim Andreas wondering if the project was destined to not happen. Nevertheless, they persisted. Andreas, guitarist Jeremy Randall, and multi-instrumentalist Chris Kennedy recruited James Karnes to take over on the four-string. Even if the quartet hadn't released Envy in the Valley, they likely still would have won the title of best band in Phoenix. The music veterans release evocative music videos, and make every live show an event by mixing onstage visual elements with their well-crafted rock songs.

If you've heard local blues artist Hans Olson playing on your favorite network-television procedural drama, or the catchy guitar rhythms of CooBee Coo over a swanky men's clothing commercial, that's the work of the licensing gurus at Fervor Records. When the Sunnyslope-based label isn't putting Arizona music in your ears as you binge the most recent season of your favorite Netflix show, it's releasing new music from The Pistoleros and Fayuca, or compiling our state's musical history into one of its collections. One of its latest offerings, Mid-Century Sounds: Deep Cuts From the Desert, celebrates the work of Phoenix studio owner Floyd Ramsey, who recorded Waylon Jennings and legendary guitarist Duane Eddy.

Raquel Willand was born to sing. If her participation at this year's Phoenix Rock Lottery wasn't proof enough of her talents, do a Google search, and chances are you'll come across her old SoundCloud page. Even on those old tracks, she showed tremendous promise as a vocalist. Fast-forward to 2015, when Willand answered Jared Wood's Craigslist ad looking for bandmates. Since then, the Phoenix quartet went through several name and stylistic changes before settling on the bluesy rock elegance of Panic Baby. The single "Don't (Lie to Me)" brings out the passion of Willand's vocals, which will serve the band well as they prepare to release more music this year.

Rapper Teek Hall turned 33 in January, so he threw a big party at The Rebel Lounge to celebrate. But it was those in attendance who received the real present. The Detroit native shared his latest album, The Living Daylights, which was produced by Charlie Mumbles, one of Arizona's hottest producers, and features collaborations with Open Mike Eagle and Mega Ran, Hall's co-host for their wrestling podcast, Mat Mania. Hall's latest effort is chock-full of clever pop-culture references, personal lyrics, and sharp rhymes that skewer his contemporaries. The Valley's hip-hop scene already has the talent, but The Living Daylights is sure to bring it the recognition it so richly deserves.

The Doyenne is a certifiable legend. A songwriter, producer, electronic musician, rapper, alt-R&B sensation, and dance-music machine, Syeed DiJon Poole has been freaking out the squares and wrecking house shows for years as The Doyenne. The Doyenne had been a fixture at shows at the old Trunk Space and Funny World, often playing alongside musical polar opposites like Dinosaur Love, Space Alien Donald, and Sugar Skull Explosion. What The Doyenne shares with those bands is a love for dressing up, a willingness to be abrasive and confrontational with the audience, and a contempt for milquetoast indie-rock culture. Shows should be parties, and few people know how to start one better than he does. What also made The Doyenne stand out when he got started (and what continues to make him a relevant and exciting presence in the Valley) is his openness about his sexuality and identity. The Doyenne doesn't give a fuck if he makes you uncomfortable, and his frankness onstage and off served as an inspiration for people to let their guards down and not be afraid to express their own sexualities.