The Grid: Games and Growlers

Just like Mario under the influence of a magic mushroom, the Valley's game-bar scene is undergoing a major growth spurt. In the months ahead, a number of geek-friendly watering holes equipped with a multitude of arcade, pinball, console, and board games will all debut. And each would be wise to take some tips and tricks from The Grid in Mesa, which does the game-bar concept right. Its two rooms are filled with glowing screens and feature gaming action of every sort, ranging from classic systems at each table to various joystick favorites like Bump 'n' Jump and Mortal Kombat 4. Even the stage, which hosts live music and DJs on weekends and a weekly Rock Band session every Monday night, is dotted with HDTVs broadcasting video game footage. Meanwhile, The Grid also has giant Jenga, foosball, an air hockey table, pinball machines, and tall bookshelves stacked with board games. Its lineup of several dozen brews available in bottles, cans, or on tap is just as staggering, and worth consulting if you need something to dull the pain of getting pwned at Fortnite.

Char's Has the Blues

A staple nightlife spot of the Melrose District, the roadhouse-style Char's Has the Blues is part bar and part wedding reception, as there's live music every night here. There's usually dancing and a steady flow of drinks, too. It's totally dark inside, with the dimmest hint of red light guiding you to the restroom, your seat, or back to the bar, which also makes it the perfect blues club. Char's self-describes as being Phoenix's Home of the Blues, with in-house performances by Sir Harrison and Friends, as well as recurring jam sessions and touring blues artists. Char's claims its musicians play the best blues, R&B, soul, and funk the Valley has to offer — and there's a reason blues is named first. 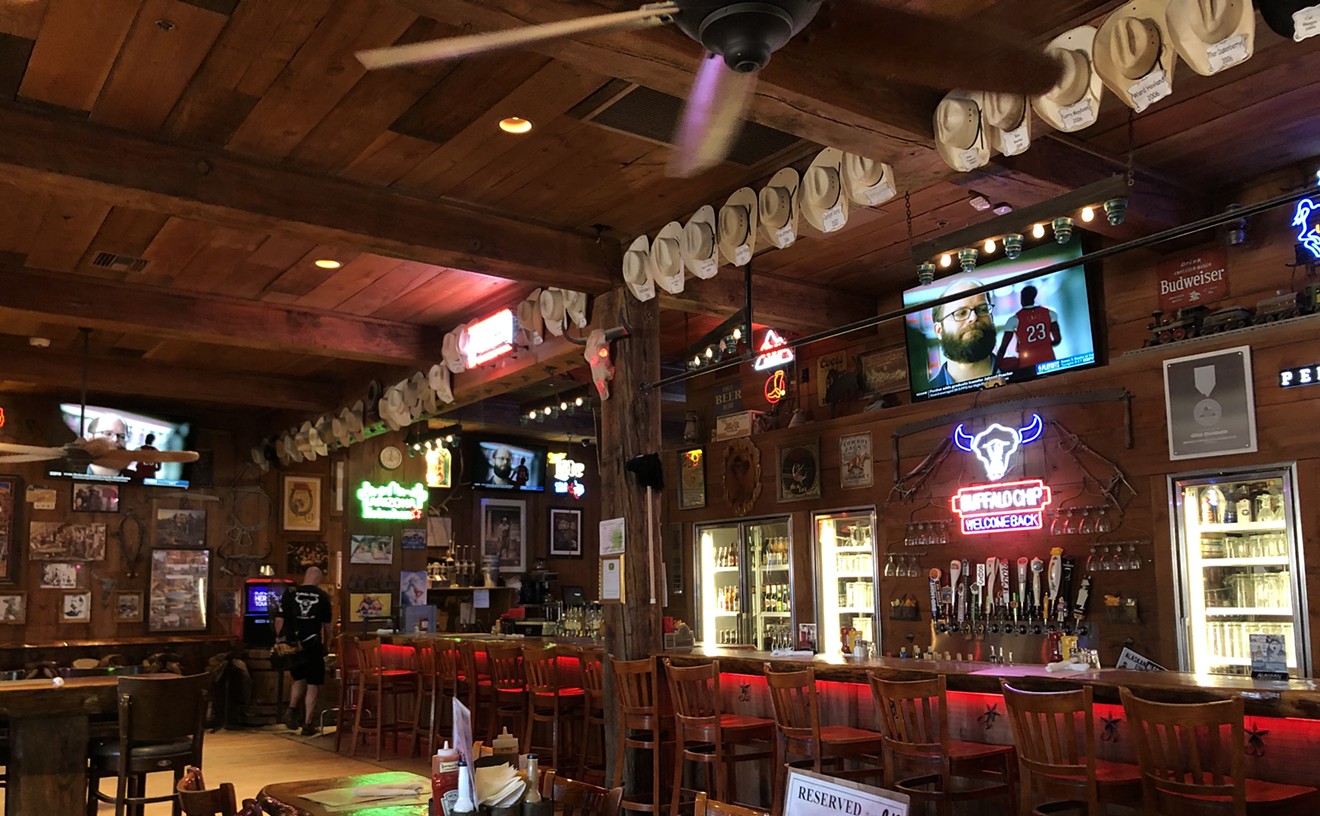 Music seeps through the door. It opens, and the band blasts. You cut past the tables — past the folks munching loaded tater tots and Tex-Mex egg rolls, folks rocking Stetson hats and jeans and even spurs. Bud Lights. Whiskeys. Waters. You push through the crowd to the night outside: bonfires, people everywhere, servers wheeling through the crowd, a bull ring in the near distance. And once you get your first drink, the raucous crowd starts to absorb you. Maybe you dance on the second stage, the one outside. Maybe you're already onto a second drink. In the end, it all flows to that bull ring — surrounded by teetering bleachers — where amateurs board live, hulking, fantastically pissed off animals and see how long they can stay on. And you remember the sights, sounds, and animals days and weeks later, as you're going about your work or maybe walking an urban world of glass and concrete. Getting out to the Buffalo Chip is experiencing the wildness left in our part of the West. 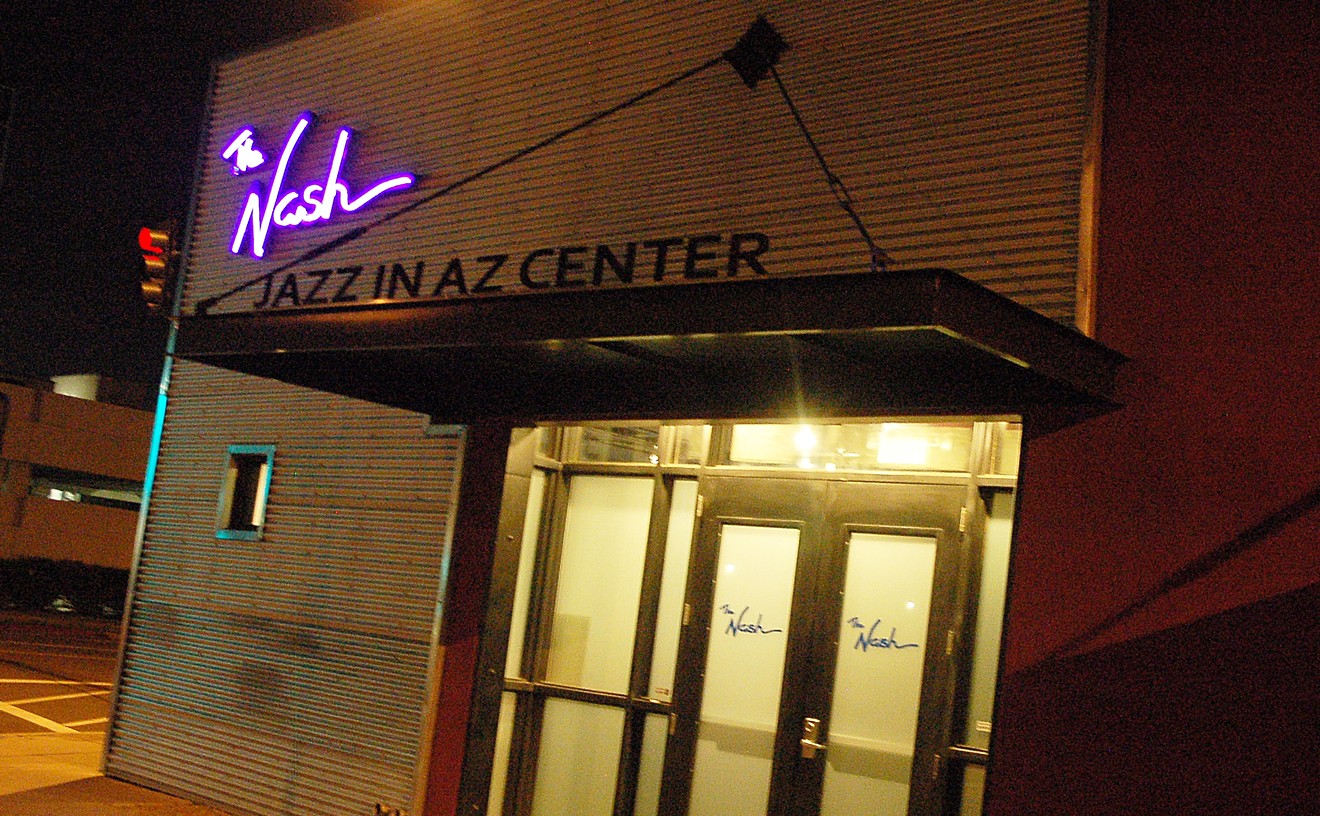 The folks who run The Nash apparently are none too happy with New Times, because we reported that the jazz venue likely will be leaving its home on Roosevelt Row soon. Well, excuse us for stating the obvious. The purple-and-tin building on the corner of Roosevelt and First streets was purchased for $2.1 million. The Nash's lease was up in August. A nonprofit that doesn't have food service isn't going to be able to afford the rent needed to make the building profitable. Management even said it was already scouting new locations. Therefore, we refuse to apologize. But wherever The Nash ends up, we will continue to applaud its effort to keep jazz alive and thriving in Phoenix. Named for local drummer Lewis Nash, the club has earned a reputation well beyond Arizona. The Chicago-based jazz magazine DownBeat has included The Nash in its international jazz venue guide every year since 2014. The Nash doesn't just present music; it provides a robust lineup of educational programs through Jazz in Arizona, which promotes jazz appreciation and performance. So let us be clear: We love The Nash. Stick that in your horn and blow it.

If the sum total of your metal knowledge is limited to that Ozzy comp you bought on a whim or a handful of Metalocalypse episodes, allow us to clue you in. The multifaceted world of metal is rich with a diverse array of subgenres, each offering its own take, style, and hellacious hallmarks. And every week, you can hear many of these subgenres blaring inside Club Red, ranging from the speed, death, and technical variations of metal to more esoteric offerings like symphonic and djent. Over the last five years, the Mesa music venue has become a haven for heshers, thanks to its great sound system and metal-friendly staff. Touring acts from across the world (including such heavy hitters as Týr, Decrepit Birth, Psycroptic, and Fleshgod Apocalypse) have played there on the regular, while local bands often host mini-festivals or album release shows at Club Red. Plus, they've got free parking and an enormous lot where you can stash your sticker-clad ride before heading inside to throw hook'em horns to your black heart's content. Rock on.

The building that now houses The Rebel Lounge has been a vital piece of Phoenix's punk and metal scene since 1979 — that's 40 years of building a community based on blunt-force, pissed-off music. Then known as the Mason Jar, this small club ushered in a wave of punk and metal bands that not only inspired a whole network of alternative subgenres, but helped forge an entire lifestyle. In 2015, the Mason Jar was taken over by Psyko Steve Presents and renamed The Rebel Lounge. Subsequently, this change in power has only enriched the venue's reputation of being a hub and inherent champion of a scene that reaches far beyond just heavy music. Remember: Punk is a lifestyle. There are few places in the Phoenix area that have established themselves as a heavy-music safe house the way The Rebel Lounge has — and even fewer with such an impressive monthly calendar.

You want to hate Gracie's Tax Bar, a relatively new hangout that for whatever reason looks and feels like an old dive bar, what with its cheap drinks, cheese curds, and chipped-brick exterior. But then, you hear the music. Bar owner Grace Perry has curated a jukebox with something for everyone, touching on classics from the past five or six decades. The broad appeal of its CD collection is impressive. The Beach Boys, Fleetwood Mac, Curtis Mayfield, Television, The Strokes, Prince, Wu-Tang Clan — few genres are ignored. Plus, it's a great deal. For $1, you get three plays, while $5 gets you 20 songs.

Park Central's crown jewel, Kobalt, is the type of place that brings in a karaoke crowd without even trying. Why? Its many features. This welcoming establishment offers karaoke four days a week — 9 p.m. to 2 a.m. Tuesday, Saturday, and Sunday, plus 7 p.m. to midnight on a seasonal basis. And there's no standing by your table at this place. Kobalt karaoke offers a stage, lights, some sort of waterfall backdrop, and quite the songbook. Picks include everything from Disney hits to country classics, legends of rock, one-hit wonders, '80s smash hits, and pop divas. And we did say Kobalt has many features — plural. The Park Central gay bar also has an attentive staff, great parking, and quick light rail access, and the place is BYOF (bring your own food).

Bliss / reBAR is the ultimate after-work go-to and late-night hangout, complete with an expansive wraparound patio — ideal for tank-top season. There's liquor, a big dining room and bar, and the Moonlight Menu from 10 p.m. to midnight. And if the amazing crowd and unisex restrooms aren't proof enough this is a fantastic gay bar, Bliss / reBAR also hosts Sunday events like Chillaxin Sunday Phunday with a live DJ, Karaoke Kraziness, weekend Champagne brunch, and sometimes, BLUSH — better known as the drag brunch experience. There are also daily specials like all-day happy hour on Monday, and 20-percent-off Wednesdays. But mostly, this downtown nightlife spot has a proud and supportive atmosphere that is welcoming to everyone.

Around since 1984, Charlie's Phoenix has been the kind of inclusive nightclub that has become a go-to for members of the LGBTQ community — and everyone else for that matter. The somewhat country-themed nightclub is known for its ever-fresh rotation of nightly events, like Undie Mondays, Claudia B's Karaoke Cabaret on Tuesdays, Pipin' Hot Thursdays, and while the weather is hot, Banana Hammock Sundays. There are also free dance lessons, celebrity drag shows, DJs, dance nights, and so much more. Charlie's attractions include the light rail station across the street, and the always dependable Taqueria Los Yaquis taco stand outside on Thursday through Sunday evenings.