7 Techy Out of This World Weed Gadgets SeaHorse X transforms into multiple cannabis devices: a cartridge device, a nectar collector, a vape machine, and a rig. Mike Madriaga
Robotlike tech and gadgetry are making their way to the cannabis-consuming human race. And like the trusty robot in '70s utopian science fiction flicks, these 2022 gadgets can make life easier for the new-age smoker.


Phoenix New Times scoured the galaxy to locate seven electronic gizmos that'll bring your cannabis consumption sessions and cannarsenal up to speed — light speed, that is.

About $45
Thicket
Need a light? Thicket offers two ray gun-style torches that are futuristic looking, functional for dabbers to heat rigs, and designed to spark up flower bowls in bongs. Both the "Spaceout Ray Gun Torch" and "Spaceout Lightyear Torch" are one-to-one in scale and ergonomically fit in the palm of your hand. The torch lighters utilize butane, which is not included, and have an adjustable flame control. When the trigger is unlocked and depressed, a flame emits from the stainless steel tip. As seen on social media posts, the space-age-influenced designs in various colorways are popular and display well with ornate glass collections. They won't break the bank, either.

The Mint in Tempe
This concentrate vaporizer's cone-pyramidlike structure would trip out even the most curious hovering extraterrestrials. It's an eRig — a combo dab rig and portable e-nail — that features a real-time control to dial in the bowl's temperature and can accommodate wax, dab, honey, shatter, or other solid extracts. Made of metal and plastic, it comes in a chrome-and-matte black two-tone finish. 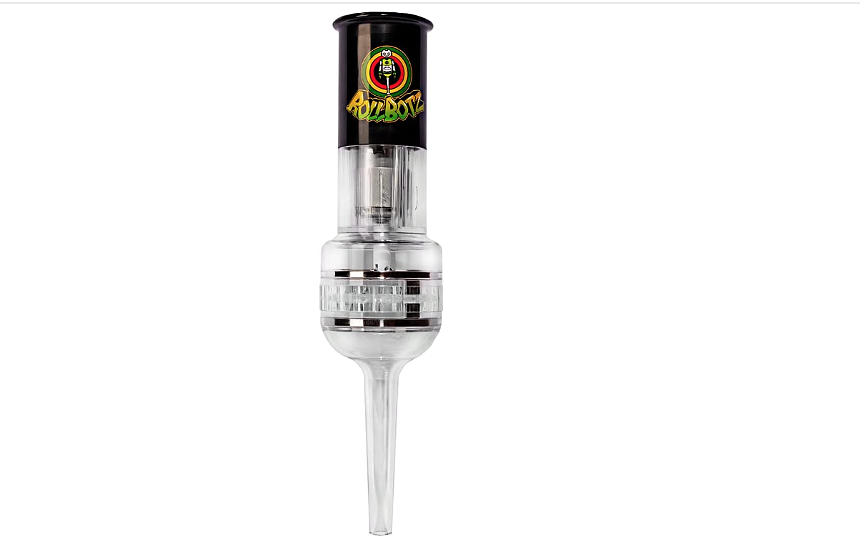 $149.99
Package of RAW Cones for $14.99
Amazon
This cone filling machine features a bead grinding mill and a funnel towards the bottom to hold the cone. Place the flower on the herb chamber's perforated filter, and add a cone into the transparent plastic cone holder. Beaded chain tech in the main chamber spins and minces up the flower, which then drops through the perforations and fills up the cone.

The RoboKone is powered by a built-in rechargeable lithium battery and comes with a USB-C charging cable.

$299
Beed
Imagine a machine that'll make a weed cone for you in 20 seconds. The Beed Machine is a sleek countertop appliance that is simple to use. A single button on top of the toaster-looking opens the loading slot. Insert a cone and Beed capsule into the unit. Press the button again, and the machine does all the work. In 20 seconds, the weed in the pod is infused into the cone, and a side door opens with a filled cone ready to smoke. Remove the now-used pod cartridge — just like you would do with a Keurig coffee maker — and that's it, you're done.

The company sells Beed capsules in packs of eight. Each pod is pre-filled with 0.5 grams of fresh ground cannabis flower that is nitrogen-sealed to preserve the strain. Five strains are available, and a canister of cartridges sells for $32.

The HiGrade Analyzing Scope-Analyzer will help you determine exact strains of weed.
Amazon

$67.99, which includes one-year pro app subscription
Amazon
Everyone, even folks in the future, has that one bud who claims to have the "fire" strain from outer space. Finally, there's a fact-checking gadget that will quickly decipher if the herb is "dirt" weed or a potent "dank" strain. The kit comes with a HiGrade scope, a high-def camera that connects to your phone. It zooms in closely to the weed, enabling the phone to focus on microscopic plant structures and snap uber-macro photos in crisp detail. These images are then relayed via the downloaded HiGrade app, where they're analyzed against a massive database. The results, which are sent back to you immediately, tell you the exact strain of weed your buds are passing to you.

Hounds Labs
Have you ever gotten too baked at a sesh looking up into the Milky Way? The Hound Cannabis Breathalyzer will help determine if you're legit impaired or not in 20 minutes. Simply breathe into a single-use cartridge attached to the silver-and-black-colored hand-held breathalyzer device; a small screen on the opposite side indicates progress and signals when the collection is complete. Place the cartridge into a separate base station, which, in 20 minutes, measures the level of THC in your breath "with a sensitivity that rivals the capabilities of mass spectrometers found in toxicology laboratories," according to the company.

The hand-held device and its base station are marketed toward business employers and law enforcement on the Hound Labs website, which doesn't display a retail price.

"Conventional marijuana tests (blood, urine, oral fluid, and hair) cannot differentiate between an individual who smoked shortly before work and therefore may be impaired versus someone who used responsibly over the weekend," according to the company website. But the Hound Cannabis Breathalyzer can.

The Mint in Tempe

If a Canna-Transformer was conceptualized as a robotic character in the future, SeaHorse X would be a "lit" prospect. Made by Lookah, it converts into multiple cannabis devices: a cartridge device, a nectar collector, a vape machine, and a rig. And like the old robotic toys that shifted shapes, the SeaHorse X is presented in a plastic tray with all its accessories in place, ready to transform. The Mint dispensary in Tempe sells the SeaHorse X unit for $140.
KEEP PHOENIX NEW TIMES FREE... Since we started Phoenix New Times, it has been defined as the free, independent voice of Phoenix, and we'd like to keep it that way. With local media under siege, it's more important than ever for us to rally support behind funding our local journalism. You can help by participating in our "I Support" program, allowing us to keep offering readers access to our incisive coverage of local news, food and culture with no paywalls.
Make a one-time donation today for as little as $1.