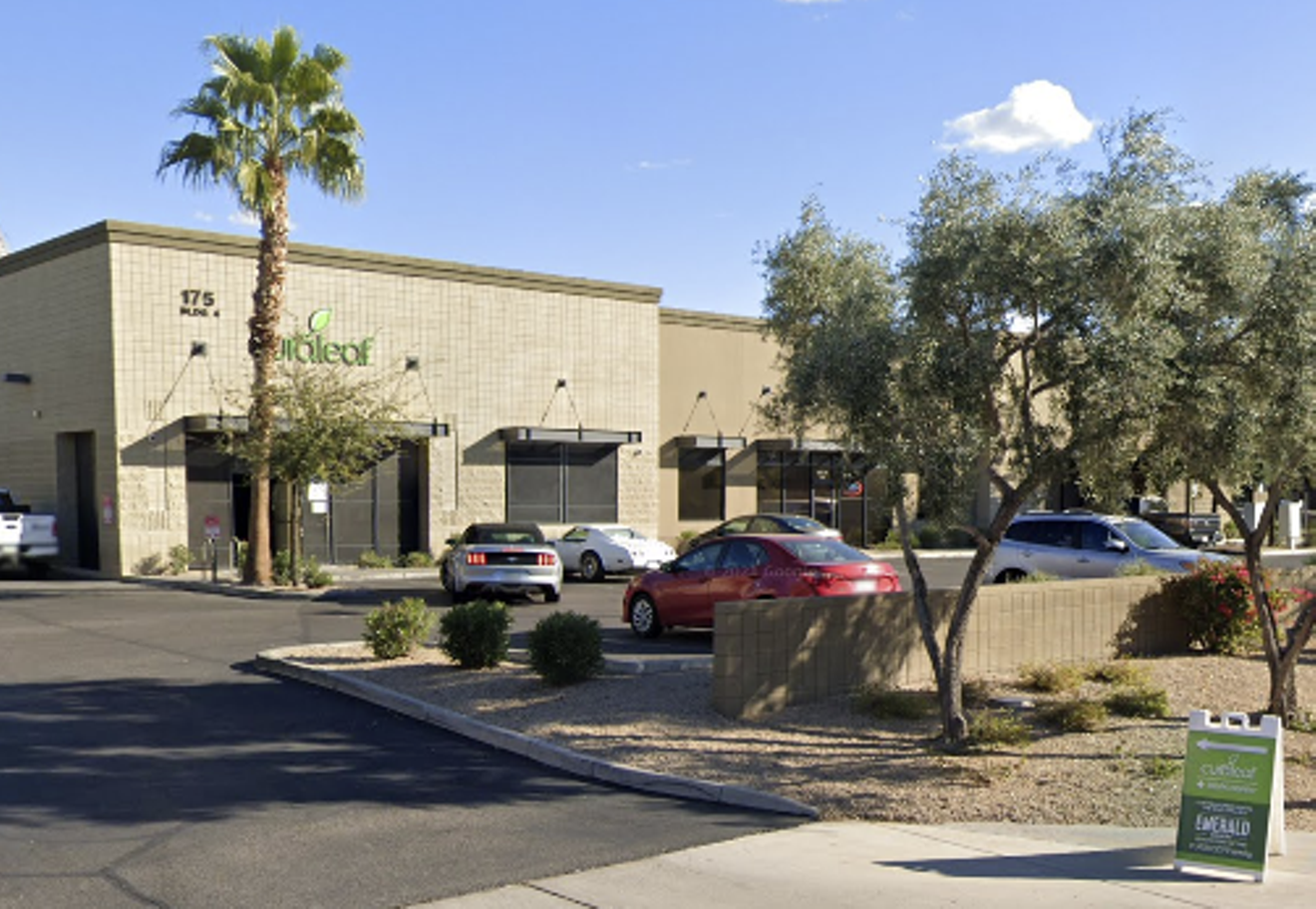 Massachusetts-based Curaleaf acquired this dispensary in Gilbert for $18 million in 2019. Google Maps
Marijuana budtender Anissa Keane tried to hash out a union contract at her dispensary in metro Phoenix but lost her job instead.

The 28-year-old wants her job back at the Curaleaf Dispensary in Gilbert and has an open case to do just that with the federal agency that oversees workers' rights against the largest marijuana dealer in the nation.

The Sun City resident filed a complaint with the National Labor Relations Board in October 2020, arguing that she was fired for organizing her coworkers on the job.

Curaleaf, a publicly traded corporation based in Wakefield, Massachusetts, denied claims that the former employee was fired for unionization efforts.

Keane said she was surprised that her tenure at the company would be cut short and sought to improve working conditions.

Marijuana budtenders, who are retail associates selling pot products to patients and recreational users alike, earn on average $14 an hour in Arizona, about $2 above minimum wage, according to salary crowdsourcing website Glassdoor.

Unlike most other retail stores where average receipts per customer are under $100, the cost of marijuana flower to smoke can be hundreds of dollars for customers. And it typically requires making a lot of change in cash.

Keane said she felt like most of her coworkers were in favor of unionizing, but fear was a motivating factor when it came to signing the petition.

“They were just scared about losing their jobs when Curaleaf found out,” she said.

If Keane wins the administrative case, she could get her job back and continue to organize.

The Gilbert dispensary worker reached out to the United Food and Commercial Workers Union Local 99 in Phoenix for help.

Cannabis industry workers are also unionizing in California. Employees of a cultivation site in Adelanto, owned by Israeli-run Tikun Olam, ratified their first contract with the International Brotherhood of Teamsters last month.

“I was interested in bringing that energy to Arizona,” Keane said.

The goal of a union is to get better hourly pay and benefits, and to gain more control in the workplace — issues at the forefront during a global health pandemic such as COVID-19. As the marijuana industry matures and grows as part of the overall economy, unionization efforts are picking up pace.

“It is a burgeoning industry and there is a sense that there is a lot of profit being made, and that could and should be shared more with the workers,” said Michael Selmi, a labor economist at Arizona State University with expertise in the cannabis industry.

Curaleaf operates nine locations across the Valley with sites in Phoenix, Glendale, Gilbert, and Youngtown. It has more than 100 operations nationwide.

Employees at the company in Massachusetts accused Curaleaf of interrogating, firing, and retaliating against them after they unionized its Hanover location in June 2020, documents with the National Labor Relations Board shows.

The NLRB ordered Curaleaf to stop such a practice. But the ruling also stated that Curaleaf did not illegally fire an employee for union activity and that the company showed "no evidence of animus" towards her.

Employers can bargain with employees looking to organize "in good faith", according to the NLRB. And they "can’t coerce, intimidate, or surveil employees."

But that's what happened to the Gilbert marijuana dispensary worker at Curaleaf, according to her complaint.

“I want to show my coworkers because I know how scared they were to organize, that you can't let these corporations bully you,” Keane said in an interview with Phoenix New Times. “I’d love to walk back in there and work another day.”

She was worried about the lack of health and safety precautions during COVID-19 at the dispensary.
“The pandemic has clearly spun some high profile union organizing in Arizona,” said Selmi, the researcher.

That's despite the fact that Arizona is a "right-to-work" state, which means employees don't have to join unions, even if their workplace has a certified bargaining unit.

The first corporate Starbucks store in Arizona may unionize in Mesa. The Starbucks locations at Phoenix Sky Harbor Airport are already unionized. In general, though, there hasn't been a big uptick in union drives since the coronavirus pandemic began, he said.

“Working at home makes it much harder to organize, so that could be a damper on organizing,” he said.

Keane, the Gilbert budtender, claims she was fired for being $20 short on her register at the end of the day. She was sent home for a week after the issue.  “I knew they were going to fire me,” she said.

Curaleaf executives were not able to comment on the specifics about Keane's termination due to company policy but denied her claims.

It’s the same union that filed the complaint against Curaleaf in Massachusetts last year and won.

I cannot make any comments about the Anissa case because that case is still open," said Martin Hernandez, a spokesperson for UFCW's Phoenix chapter.

The union already has already seen "lots of cannabis workers" organize successfully in other states.

"Here in Phoenix, we've been looking at this industry very closely," Hernandez said. "This is an industry that is very generous with regards to the profits. We feel that the employees are not getting much in return for the work that they do in this delicate, difficult industry."

While marijuana remains illegal on the federal level, Selmi, the economist, said that aspect shouldn’t interfere with unionization efforts in the Valley and places like it.

“As long as the NLRB is willing to recognize dispensaries that are lawful in states like Arizona, the process should be the same as it would be for a different kind of business,” he said.

Keane, who has been waiting for a decision for months, hopes to see activity soon. In the meantime, she is working part-time for a pain management business that is closely entwined with the marijuana industry.

Helping patients is why she got into the business in the first place.

"Our bottom line is to care for the patients who need our product,” Keane said. “It is unfortunate to see the corporatization of something I thought would exist purely to help other people.”

Editor's note: This story has been updated to clarify a misleading passage about a labor dispute at Curaleaf.
KEEP PHOENIX NEW TIMES FREE... Since we started Phoenix New Times, it has been defined as the free, independent voice of Phoenix, and we'd like to keep it that way. With local media under siege, it's more important than ever for us to rally support behind funding our local journalism. You can help by participating in our "I Support" program, allowing us to keep offering readers access to our incisive coverage of local news, food and culture with no paywalls.
Make a one-time donation today for as little as $1.
Elias Weiss is a staff writer at the Phoenix New Times. A native of Charlotte, North Carolina, he reported first for the Northwest Arkansas Democrat-Gazette and was editor of the Chatham Star-Tribune in Southern Virginia, where he covered politics and law. In 2020, the Virginia Press Association awarded him first place in the categories of Government Writing and Breaking News Writing for non-daily newspapers statewide.
Contact: Elias Weiss
Follow:
Twitter: @ecweiss