Organizers said the biannual event, held October 22 and 23 at the Scarizona Scaregrounds in Mesa, attracted a crowd of 10,000 to 15,000 people and was "focused on consumer appreciation and dispensary accountability."

But also, the contests. Errl Cup — "errl" being slang for "oil" or cannabis concentrate — hosts a slew of competitions over the weekend, including Vape Wars and Errl Wars, based on the fastest consumption times in the vape and oil methods. Then there was the fastest joint-rolling contest, as well as Bong Wars.

"This is the finale for Bong Wars," an Errl Cup referee yelled into a megaphone on October 22. "The last two [competitors are] Marco and Bat Bong."

"Who can smoke the weed fastest," according to Errl Cup staff member Lauren Wysner, is what the Bong Wars is all about. "And they must get rid of all the green [weed] and clear the bong out."

Bong Wars, a single-elimination tournament, includes a judge for each contestant who ensures the weed provided to each contestant is placed and packed inside the bowl and not discarded.

"We have our judges around closely watching it until we know there's no more green [weed] in there and it's ash," Wysner said. The first smoker who clears all their weed and smoke is the winner.

For the bong contest, local cultivator Farm Fresh Organics sponsored the Blue Dream flower, which is a sativa-dominant hybrid marijuana strain with about 18 percent THC, according to one of the judges. But by the time some of the 32 Bong Wars competitors made it to the contest, they were already super blitzed after making the rounds of the booths that were providing complimentary bong rips, dab-rig hits, and THC-infused edibles. Lines had formed at Temp Labs, Genesis, Dime Industries, Mint Cannabis, Aeriz, Drip, and Shango.

Before Bong Wars got underway, one competitor bowed out and didn't respond when the judges called her name. Another person passed out and received medical assistance.

"It's the heat," said Errl Cup co-founder Jim Morrison. "[Sometimes] they don't know the dab amount that they take." But the festival had medical staff on hand and a booth area called "If You Medicate Designate" where attendees were given free rides home. Morrison said he started the booth six years ago."We want to make sure everybody's taken care of," he added.

Mike, a competitor in the semifinal round of Bong Wars, told Phoenix New Times that he lost because "it was a lot of fucking weed." In the first round, competitors smoked .25 grams; that amount grew to .5 grams in the second round. By the semifinals, they had to smoke 1 gram of Blue Dream flower. At that point, finalists had already smoked a few bowls of weed.

"It's definitely a lot," said Joseph Freeland, who goes by Bat Bong and competed in the finals. "It's like a blunt size if you roll it in papers. Imagine smoking one that size in around a minute's time."

Freeland said it's his third time competing in Bong Wars. His history with the contest dates back to when it started in 2019. "I'm not going to lie. I got smoked the very first round," he said of the inaugural event.

The Errl Cup Smokes Up Mesa 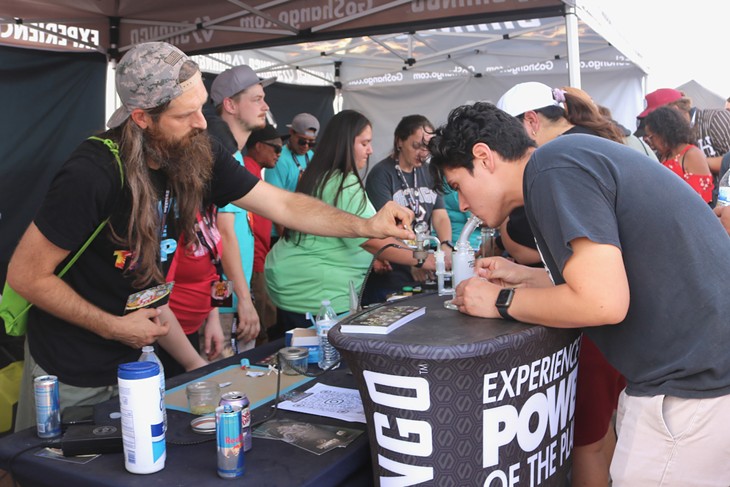 'Keep Hitting It No Matter What'

Before each round, the judges emptied the water from the glass bongs, disinfected the mouthpieces, cleaned the bowl with a metal pick, and added fresh water. Next to the glass water bongs, the judges filled the trays with flowers weighing in at 1.5 grams of premium weed for the final.

Competitors kept their sunglasses on to cover bloodshot eyes. It's sort of like poker — but here, you can't show your opponent you're too baked — as the eyes are very telling. Freeland wore a pair of pink-colored sunglasses.

"My technique is I just got to keep hitting it no matter what and not worry about breathing in oxygen," he explained. He goes "until the bowl is cherry."

Freeland competed against Marco, who wore old-school black sunglasses. He didn't say a word to New Times; he was in a zone. Marco flipped his hat backward so his bill wouldn't interfere with his bong hits and, with that, seemingly activated his cannabeast mode. The two squared up with only a 6-foot wooden table with two 3-foot glass bongs separating them. They might just be the fastest bong rippers in the Valley.

The competitors each had torch lighters in hand and index fingers ready to push the trigger. "One … two … three — goooooo!" a judge yelled.

The two men loaded the flower into the bowls and did their thing. The judge yelled, "Come on! You guys got this. Don't give up."

Both competitors took massive and nonstop consecutive hits; the water bubbled feverishly in both bongs. Then Freeland's flowers caught on fire, and he kept puffing. He wasn't fazed and kept huffing and puffing, decimating the flowers. Marco was behind by a nugget. He was pulling up the bowl and permitting air to enter his bong, which slightly slowed down the burn.

Two additional judges monitored the bowls and ensured each flower made it inside. A fan screamed, "Clear that shit!" The two bong smokers toked hard; veins appeared on their temples. Their bong smoke combined in the airspace and hotboxed the area.

By the minute mark, Freeland torched the last of the weed and took a longer-than-normal drag. He then tossed the torch lighter onto the wooden table, and the judge pulled out the bowl and inspected it. The other judge verified that no green was left in the bowl and gave the proverbial head nod. Freeland exhaled a big cloud of smoke, and the judges proclaimed him the winner. He extended his fist and gave Marco a fist bump, then raised his hands and arms in the air and yelled, "Fuck yeah!"

"Oh, it is an amazing feeling," Freeland said. "I kept telling myself, 'Enjoy yourself,' and that's what got me to the next round. I just kept lighting that bowl until the bowl was cherry. And then, no matter what, just kept pushing that bowl down."

In addition to Bong Wars and the other competitions, the festival sprawled across a six-acre grass and dirt venue. Live music was provided by The Conveyors reggae band, Rio Grande and Optimystical, which played psychedelic hop. Food trucks sold pizza, poke, and cold drinks. The event is popular, and attendees faced an entry line that stretched a quarter-mile long at some points during the first day.

Barracuda Cannabis had bags of soil for sale and signed people up for cultivation classes. 420 Growers Choice sold Oregon Super Soil, while Mary Jane SmokeWear offered its signature Dope Sacks and cannabis gear. High Monks NFTs was on site and taught attendees about cannabis non-fungible tokens. A lawyer had a booth with a banner that read, "Ever busted for marijuana? Find free expungement legal aid here!" Finally, Waxx Made set up a pop-up smoke shop and slung bong masks, "Stoned not Stupid" baseball caps, pastel-colored unicorn pipes, and pillows that resembled plastic baggies filled with weed.

"All these vendors come in, and they enter their product in the competition — the best of the best," said Brandy Wise, a longtime staff member of Errl Cup.

Morrison and Jay Neri formed Errl Cup in 2015 to provide Arizona cannabis patients with clean, consistent, and safe access to cannabis. Morrison had just lost his sister to multiple sclerosis and saw how difficult it was for her — and others — to obtain cannabis. So they created Errl Cup and brought in growers, dispensaries, and businesses to provide their products so attendees could test them and vote. The event has since evolved into an appreciation festival for providers with high-quality cannabis.

In 2023, Morrison said he wants to add a contest for eating THC-infused food or edibles. "It'll be a two-stage who can eat it the quickest but then come back in an hour," he explained.
KEEP PHOENIX NEW TIMES FREE... Since we started Phoenix New Times, it has been defined as the free, independent voice of Phoenix, and we'd like to keep it that way. With local media under siege, it's more important than ever for us to rally support behind funding our local journalism. You can help by participating in our "I Support" program, allowing us to keep offering readers access to our incisive coverage of local news, food and culture with no paywalls.
Make a one-time donation today for as little as $1.