Food Trucks and Free Weed? Mangia Ganja Is a Festival Made In the Clouds Angel (right) from GreenPharms, filled the bong with Mac V2 flower for people to test at Mangja Ganja on October 2. Mike Madriaga
Baked bakers were the cause for a plume of smoke at The Venue on Washington on October 2 — a fusion of hundreds of bong hits, two 1,100-degree brick ovens, and lit folks sparking up pre-rolls and pipes.

"It's Mangia Ganja," said Kahla Grey, a spokesmodel for cannabis brand distributor Trendsetters. "It's a food truck festival where everybody can smoke weed."

Mangia Ganja is the first cannabis-consumption-friendly food truck festival in Arizona. Trap Culture, a cannabis promotional company, organized the event, and it drew more than 800 people. Over 20 booths were selling cannabis-related products, and the event also included a live DJ, games, 10 food trucks, and comedy performances. While no purchasing or sales of cannabis were permitted at the event, free samples of cannabis and edibles were plentiful.

Grey, who's been smoking blunts for more than 10 years "as it's the only classic way to smoke," had a Packwoods-branded duffle bag full of marijuana nuggets on her table. She was passing out Torch, THC Living, and Packwoods samples to attendees. "The festival is normalizing cannabis, and it's better than everybody getting drunk; we're nice, and we kick ass," she added.

Lexie Coleman, event coordinator for Mint, attended the festival to promote the dispensary's THC-infused Angry Errl hot sauce line. "Trap Culture has done this in the spring on a larger scale; it was three times the size. So they decided to make it a monthly networking fun experience for everyone to come out, get high, and snack together," she said.

"It's an excellent opportunity to show them everything we can do. And we get to give them a chance to try it all here," Coleman added.

Mesa resident Matt Smith was among the attendees at Mangia Ganja. He was trying a glass bong at the GreenPharms dispensary booth. "It's smooth, actually. They are trying to get more people to come to their dispensary by giving out free samples," he said.

Angel, a GreenPharms representative, refilled the bong for Smith. "It's Mac V2 (a popular Monster Alien Cookies strain flower)," said Angel, who asked that his full name not be used. "It's a hybrid indica testing at 28 percent and one of the heavier indicas we got in the shop." About 20 people were waiting to get free tokes. "Do you wanna finish this, or can I load up a fresh one? It's up to you," Angel asked. Smith tapped out. Angel jokingly exclaimed "estuvo," which translates to "I'm done" in Spanish.

Angel cleaned out the bong bowl with a metal pick, disinfected the mouthpiece, prepped it with more Mac V2, lit it, and said, "Go." The next person in line took a big toke, held the smoke in her lungs for about 10 seconds, then exhaled a colossal cloud.

"The weed helps me relax and keep my sanity," Smith said. "It keeps the stress level down." Smith, who works in a shipping and receiving department of a local business, said he's been smoking weed for more than 30 years. He added that the Costco-like approach of sampling weed product works. He said that after the festival, he's heading to a GreenPharms store to cop more of the Mac V2. "It's more than the bud — they are friendly and knowledgeable," Smith said of employees at GreenPharms. 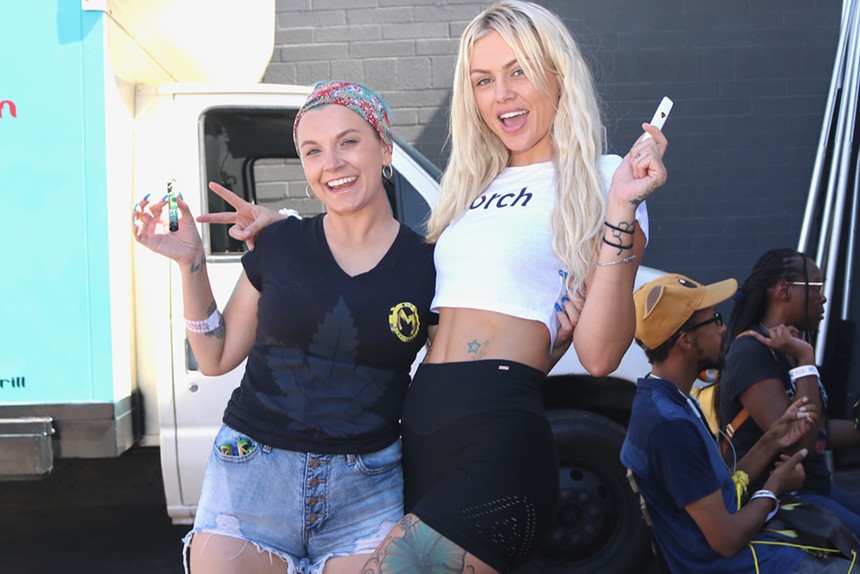 'You Get the Munchies'

Mangia Ganja opened at 11 a.m., and at noon people were still waiting to get into The Venue. The event site quickly filled up and lines began forming at the Dog On It, La Hotkeria, and Savage Daiquiri's food and beverage spots.

"My biggest qualm is when there are only medicated samples at an event, and you keep eating those instead, and I need [non-medicated] food,” said Grey. “When you get high, you get the munchies, right?"

Some pot smokers get a cottonmouth, too. "And here, they have this little lemonade stand right there (Dank Drank Lemonade) that makes like every flavor of lemonade, and Eis Café ice cream coffee is my jam. They're very refreshing, especially today," Grey said. Both beverage spots had lines of customers.

The Tzikii Food Truck was the first food offering as people entered the event. "Our best seller is the gyro," said Mino Henes, who's been in the Egyptian food truck business with his mother for seven years. The $12 gyro consists of lamb and beef meat, which is sliced off a rotisserie as it spins over the flame. Put the meat on pita bread and top it with lettuce, tomatoes, onion, and Tzikii sauce — a wordplay on Tzatziki, which is a Mediterranean spice made with yogurt, minced garlic, olive oil, and chopped cucumbers — for the perfect gyro.

Henes said he understands firsthand what many attendees experience, as he smokes weed to alleviate the sciatica pain from a pinched nerve. "I smoke marijuana at night so it can help me sleep and relax me after a long day from standing on my feet all day," he said. Lucky for Henes, some of the businesses at the event hooked him up with free cannabis samples. 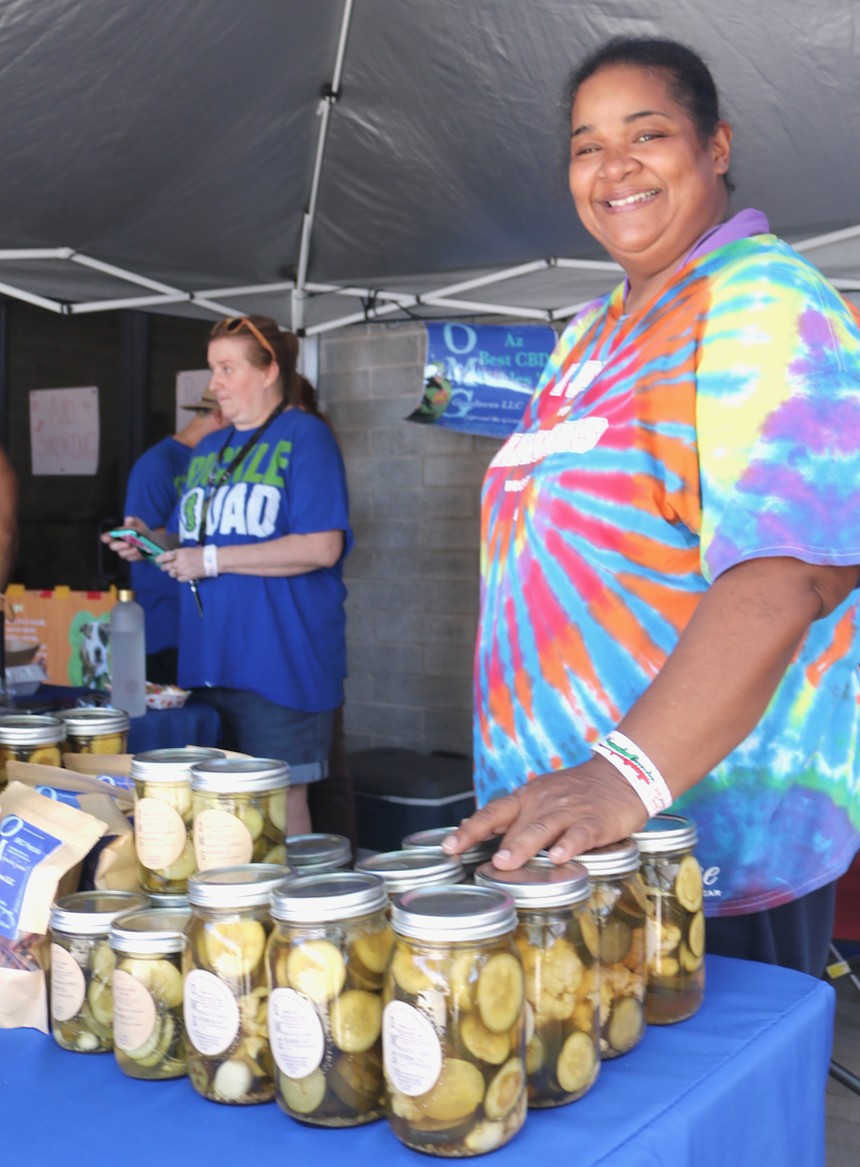 Adrianne Goudeau sold a few bottles of "goudes," including her Hemp Bread and Butter Pickles and Hemp Spicy Cauliflower Mix, at the festival.
Mike Madriaga

'That's How I Healed Myself'

Adrianne Goudeau sold her OMG Goudness pickles and treats at the food and cannabis event. "All my product is made from hemp," she explained. Goudeau extracts CBD from hemp, which she sources from locally owned Superstition Hemp. At the festival, she sold a few bottles of "goudes," including her Hemp Bread & Butter Pickles and Hemp Spicy Cauliflower Mix, which she sells for $30 a jar.

"For my pickles, I used Kangen water (an alkaline ionized water), which provides a PH that will take the pesticides off the pickles — that's the difference in my pickles." When asked if she has a THC version of the pickles, Goudeau responded, "That's how I healed myself." She explained that she made a line of THC-infused pickles for herself in 2010 after becoming a cannabis patient. When hemp became legal in 2019, she took the techniques she used with cannabis and incorporated hemp, instead.

Initially, Goudeau sold baked goods, candies, and cookies at cannabis shows. Then she transitioned to savory items. "I believe that as a cannabis patient, we should be looking at our diet and what we're putting in our system. I have diabetes, so as a patient, the worst thing we can do is put sugar in our system for medicinal reasons, so I try and get away from that," she said. 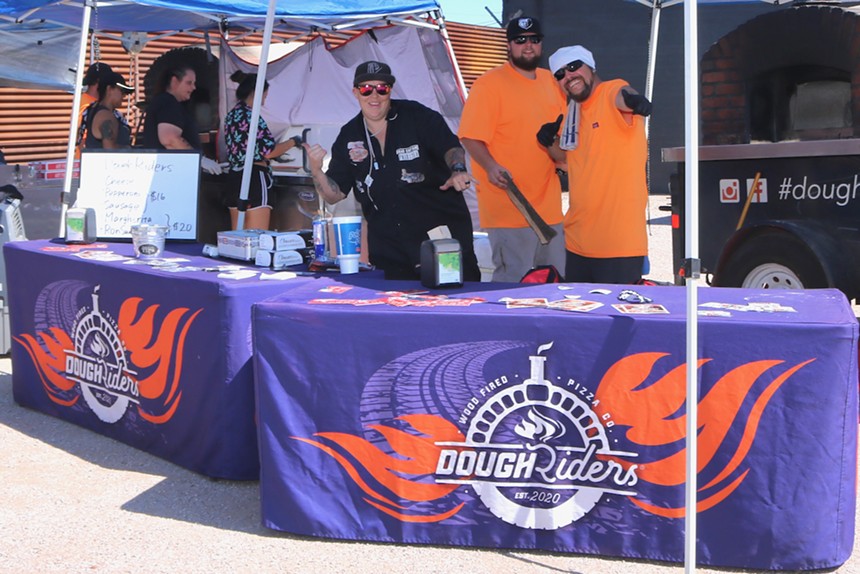 Tiffany Priest (center) of Dough Rider was one of about 20 vendors at Mangia Ganja.
Mike Madriaga

'The Best Pizza I've Had All Day'

During a five-minute interview with Phoenix New Times, Priest sent out more than a dozen pizzas — plain cheese, pepperoni, sausage, Margherita, and meat-lover versions — throughout the festival grounds.

"This is a mobile wood fire unit, and we bring a different type of culture to the events," she said. "I bring fresh ingredients daily and make the dough at 3 o'clock in the morning. Then I go to the store and get fresh mozzarella, fresh basil, all the way down the board [of ingredients]."

She paused and then directed an employee to take four pizzas to Trap Culture representatives near the front of the event. "I'm like a mother hen when it comes to my guys. I wanna make sure everyone eats, and I make sure the staff eats, and they get water," she said.

Priest and her staff brought two dome-shaped brick ovens mounted on trailers. "They put out 1,100 degrees, and we try not to get too much cover on them," she added. "Just the tables [have tents covering the operation] so we can roll dough on them. We like to be in the sun, so we acclimate. Anybody that works for me has to know how to stand the heat because there is no kitchen."

Priest said Dough Riders doesn't sell weed-infused pizzas and added that only dispensaries are allowed to do that. The Mint store in Guadalupe is the only dispensary in metro Phoenix that serves hot dishes, including pizza, infused with THC in various dosages. The Mint was set up at the festival, as well.

"I could infuse my own pizza if I were going to do it for myself to consume," Priest said. "I do it with oils and add it into my dough." She also adds weed to her oregano mix at home because she "wants to taste it." "When I want [non-infused] pizza, I go here. But if I want a Tiff [THC-infused] pizza, I'm going to take some time, and it's gonna be the best pizza I've had all day," she added. 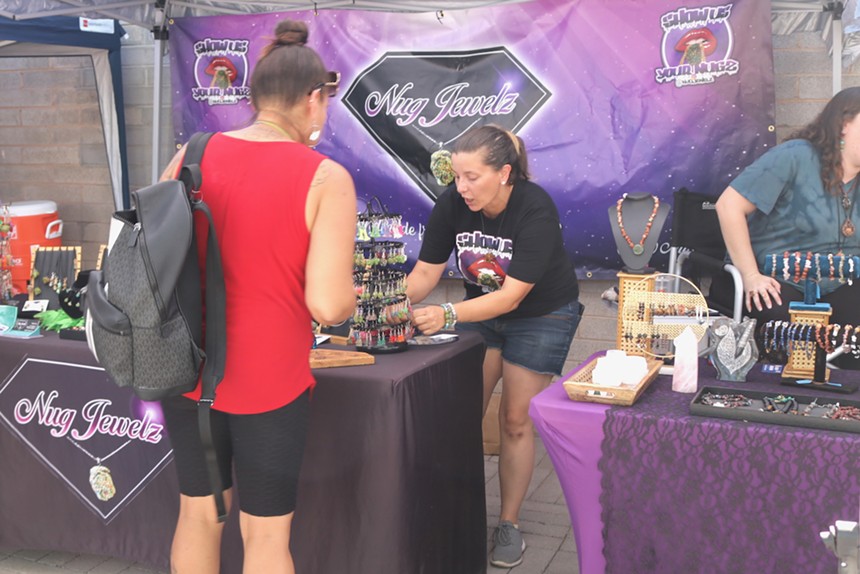 Over 20 booths were selling cannabis-related products during Mangia Ganja on October 2.
Mike Madriaga

Cannabuddies Kay and Zai sat at one of the umbrella-covered outdoor tables at the venue. They were munching on Dough Rider's pepperoni pizzas, which they ordered for $16. "We're high right now," Kay said. "This food mellows you out a little bit." Zai added, "This is a vibe for sure, and it's out in the open and downtown."

The pair, who was attending their first public weed event, asked that their full names not be published. "I didn't even know about cannabis conventions," Zia said. "I hope they do these when it's cooler, like in fall."

Mangia Ganja promoters said the next food truck and weed event is scheduled for October 29 at the Soho Lounge in Mesa. It will feature more of a Halloween costume-style get-together.
KEEP PHOENIX NEW TIMES FREE... Since we started Phoenix New Times, it has been defined as the free, independent voice of Phoenix, and we'd like to keep it that way. With local media under siege, it's more important than ever for us to rally support behind funding our local journalism. You can help by participating in our "I Support" program, allowing us to keep offering readers access to our incisive coverage of local news, food and culture with no paywalls.
Make a one-time donation today for as little as $1.