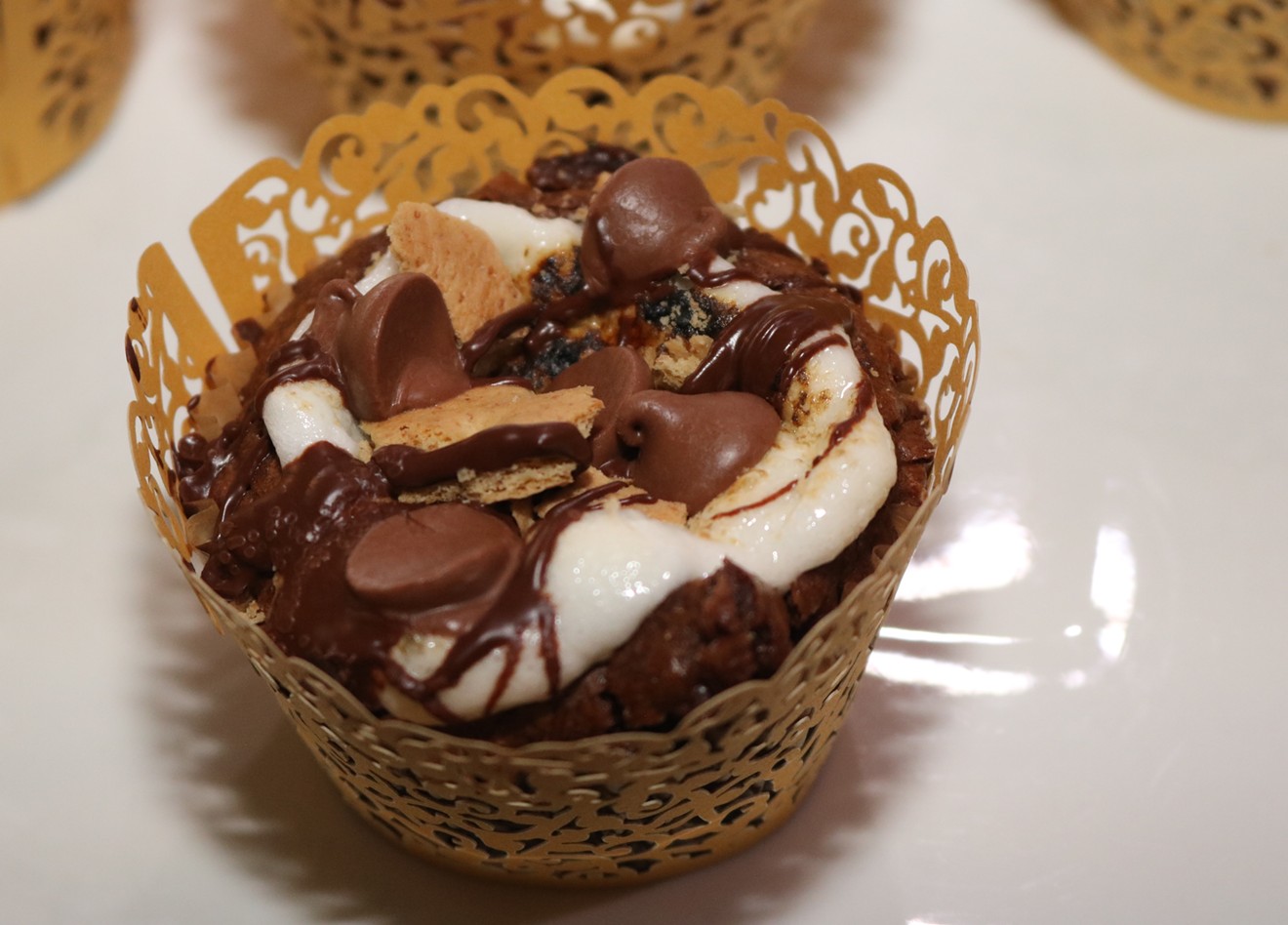 A Happy Camper brownie made with toasted marshmallows, graham crackers, and Ghirardelli chocolate can be infused with cannabis at Lez Get Baked. Mike Madriaga
A home bakery in Mesa has been cranking out some magically ornate desserts as of late, including a cake showcasing the Beetlejuice motif with an edible snake slithering atop a striped base that resembles the outfit worn by Michael Keaton's character in the 1988 blockbuster.

Another cake paid homage to the Harry Potter series, complete with a winged golden snitch, while a rainbow-colored, multilayered gateau represented the pride flag. The magical essence of the decadent desserts is intensified by the fact that they are infused with CBD or THC.

These are just a few of the tempting treats found at Mesa-based bakery, Lez Get Baked. Kaleigh Marks founded the home-based business in 2019 and came up with its memorable name.

"I really wanted to go with something that showed some of who I am: a lesbian baker who is most definitely cannabis-friendly," she said. "I think the LGBTQIA community is quite accepting of cannabis. Though I may have found myself on the stoner lesbian side of TikTok."

While all of the weed-infused cakes are for those ages 21 and up, there are a few designs that are even more, shall we say, adult.

"One of my most laughable ones came from a man looking for a cake for his lady's birthday," Marks said. "The request was for a realistic-ish unicorn-style horse cake with a penis coming from its head. He also wanted it to have a rainbow halter and veins. So, that happened. Retro Jay cupcakes are a hot commodity as well. They are little multicolored retro vagina cupcakes. They are probably one of my absolute favorites to make."

Another of Marks' specialties is magic brownies — you know, the cannabis-infused type chocolate treats that grannies used to bake on the down-low long before THC-infused edibles became legit in Arizona, medically, in 2010.

Marks said she used to take up to 22 pills of prescribed medications per day to keep her body pains at bay. She replaced all of them with weed and CBD oils. Now she's able to focus on her passion: baking.

Hard Work and a Dash of THC

Kaleigh Marks is the owner and baker at Lez Get Baked.
Kaleigh Marks
She founded Lez Get Baked to provide metro Phoenix with quality desserts with a sustainable approach, she explains. Marks, with the help of a friend, originally opened the business as a hemp-based bakery. Within a year, the bakery expanded to include TCH and non-infused baked goods.

"As of now, it is just me running the bakery," she said. "I do pretty much everything."

While the Lez Get Baked does not have a storefront, Marks has website and posts photographs of the available goods online.

There's no secret recipe to the 33-year-old baker's five-star ratings online, she says. It's a meld of her previous college business classes, hard work, intense creativity, and a dash of THC, for herself and her customers, upon request of course.

"When someone requests a THC-infused custom order, there are a few things I have to cover," Marks said. "The customer requesting the infusion has to provide the medication to be used for the order and show proof of age, and medicine needs to match ID."

Marks emphasizes that her company does not sell THC or provide THC for any of the custom cakes, pies, cookies, pastries, or brownies that she makes from scratch.

Once Marks and her customers go over details such as design, style, flavors, and food allergies, she gets into the options for infusing the sweet edibles with the psychoactive THC ingredient.

"They can choose from flower, distillate (cannabis resin), Rick Simpson Oil (RSO), and other options," she said.

Flower is the most expensive method, Marks explained, as it takes hours to infuse into the edibles.

Flower "does have more medicinal value than distillate," she opined, and while "distillate is typically the cheapest option when shopping at dispensaries, [it] does not have as many medical benefits. RSO is another generally stronger option with amazing medicinal benefits."

Once the type of infusion method is selected, Marks and the customer discuss dosage.

"Generally, I will have the customer bring the medication by before baking the order," she continued. "After that, it's pretty much cake."

Regarding cannabis preferences, Marks leans towards the indica strain of flower to smoke or "make an infused dinner for myself."

"Depending on what I have around, I will infuse it with just about anything," Marks said of the generally calming indica strains.

"Anytime I bake or cook with cannabis, I keep the temperature at 300 or lower," Marks said. "I also calculate about a 10 percent loss of product when baking with cannabis due to burning off. The benefit of providing your own cannabis is you know exactly what grade of weed you are using and if it is a sativa, indica, or hybrid." Brownies for All Moods

Before 2019, Marks paid $45 for a magic weed brownie, and they weren't good, she said. The overpriced and underwhelming dessert inspired her to take her baking to the next level.

Magic brownies infused with weed have been getting people high for more than 70 years. In 1954, the then-underground pot brownie was exposed to the world in The Alice B. Toklas Cook Book. Toklas — a lesbian whose life partner was renowned novelist and poet Gertrude Stein — published a recipe for "Haschich Fudge," which read in part: "A bunch of cannabis sativa can be pulverized. This, along with the spices, should be dusted over the mixed fruit and nuts, kneaded together."

The magical confection became a pop culture favorite from then on out. Marks is continuing Toklas' weed-infused-brownie legacy in metro Phoenix.

"Lastly, our Coconut Bliss brownie is a coconut-lover's fudge brownie made with toasted organic coconut and Ghirardelli chocolate," Marks said.

Customers can order their treats without infusion, with THC, or with hemp-based nano CBD.

"Hemp-based means that it contains less than .03 percent THC," Marks said. "That means it does not have the same psychoactive effects as the high THC provides, and it falls under the Farm Bill. In addition, the Nano CBD we use is water soluble and has a higher absorption rate because it absorbs directly into the bloodstream allowing the consumer to use less product with a greater sense of relief than other CBD products like CBD oil."

Whether customers are looking for a head-turning adult-themed edible showpiece or a magical brownie that'd make granny both proud and lit, Marks is ready to bake.

lezgetbaked.com
602-478-6277
KEEP PHOENIX NEW TIMES FREE... Since we started Phoenix New Times, it has been defined as the free, independent voice of Phoenix, and we'd like to keep it that way. With local media under siege, it's more important than ever for us to rally support behind funding our local journalism. You can help by participating in our "I Support" program, allowing us to keep offering readers access to our incisive coverage of local news, food and culture with no paywalls.
Make a one-time donation today for as little as $1.