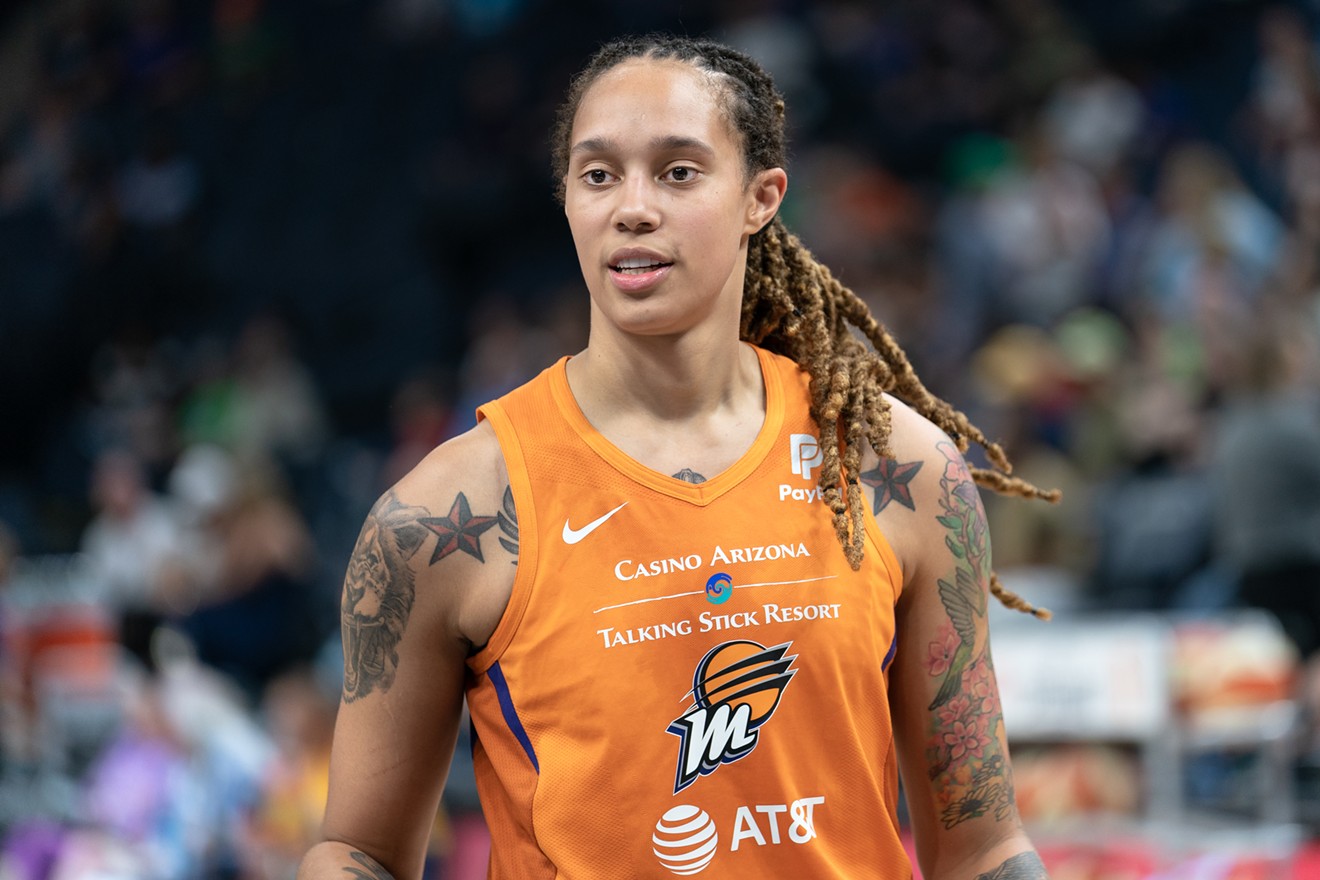 Brittney Griner of the Phoenix Mercury takes on the Minnesota Lynx at Target Center in Minneapolis on July 14, 2019. Lorie Shaull
It looks like the dab pens in basketball icon Brittney Griner’s duffel bag might have slipped her mind somewhere between Sky Harbor and Moscow's main international airport, where she was arrested on drug smuggling charges three weeks ago.

Instead of toking up at the Valley’s lofty rooftop bars like Floor 13 and Orange Sky, the Phoenix Mercury star is accused of sneaking her cannabis cartridges up 40,000 feet in a carry-on bag last month. She could face up to 10 years in prison, according to Russian authorities.
The Federal Customs Service of Russia, which classified the cannabis stash as a “significant amount,” said Griner will be detained while Russian law enforcement officials continue to investigate.

Her case highlights conspicuous disparities between the U.S. and Russian legal systems, but also raises less obvious questions about gender fairness in basketball. The world's biggest league treats men and women differently when it comes to their personal stash.

Despite more than 16,000 signatures on a Change.org petition to secure Griner’s swift and safe return to Arizona, U.S. lawmakers say it will be “very difficult” to liberate the basketball star from her jail cell in Russia.


Drug-sniffing dogs flagged Griner on the New York-to-Moscow leg of the route to her seasonal home in Russia, where she has played for the EuroLeague’s UMMC Ekaterinburg since 2015.

Griner’s team is alone atop the Russian Women’s Basketball Premier League standings entering the postseason starting on Tuesday. The WNBA season will resume in Phoenix in May and lasts until mid-August.

Griner hopes to be a starter on the Mercury's 2022 squad when she returns to Phoenix.

The U.S. State Department issued a “do not travel” advisory for Russia on Saturday as the Kremlin continues to rain missiles down on Ukraine. The warning cited “the potential for harassment against U.S. citizens by Russian government security officials” as a reason for Americans to depart the country immediately.

That led U.S. Secretary of State Antony Blinken to pledge “every possible assistance” on Monday to Americans detained in Russia.

“Whenever a U.S. citizen is arrested overseas, we stand ready to provide all appropriate consular services,” he said.

But Griner’s livelihood is in Russia. And she tried to re-enter the country before the war was declared.

Like many players in the WNBA and G League, the NBA’s minor league organization, Griner plays basketball overseas during the American offseason to make more money.


The two-time WNBA leading scorer and center has earned as much as $1.5 million for a season in Russia compared to a $215,000 base salary stateside last season.

In comparison, the NBA’s best center, Nikola Jokić of the Denver Nuggets, makes close to $30 million per year. The NBA's men play almost three times as many games in a season.

It’s more than money tipping the scales, though.

Since Prop 207 passed in 2020, Arizonans have smoked blunts, taken dabs, popped edibles, and applied pain-relieving THC balms without much worry.

For the Mercury, however, inequality is still alive and well, and not just in players' pay packets.


The latest collective bargaining agreement between the WNBA and its players, which is in effect until 2027, still prohibits the use of marijuana, and players who test positive “shall immediately be dismissed and disqualified.”

But their male counterparts on the Phoenix Suns can, if they want, toke up all season without formal sanction.

The National Basketball Players Association, representing only men, convinced the league to do away with random weed tests and to “focus its random testing program on performance-enhancing products and drugs of abuse,” NBA spokesperson Mike Bass said in October.

NBA players in a coronavirus-free “bubble” at Disney World in Orlando, Florida, in 2020 were carefree in describing the massive quantities of marijuana they would need to “survive.” Meanwhile, WNBA players like Griner quarantined close by in the Tampa Bay area, but no such claims emerged.

Although marijuana is legal in Arizona, it remains illicit in Russia and in the U.S. at the federal level. The federal government regulates all air travel.

Consequently, each of America’s major airlines explicitly forbids any type of marijuana on their flights both domestic and international, either in the cabins or checked luggage.

Because Griner is a veteran professional athlete who has spent years in Russia and travels by plane frequently, unsubstantiated theories have spread across on social media that the weed was planted in her bag.

Attorney and sports TV personality Adrienne Lawrence theorized on Twitter that the drugs were planted on Griner, in a widely-circulated rumor.

“I won't take a police report from Team Putin at face value — especially a report about 'finding' drugs on a Black person,” Lawrence said. “We're only hearing about it now because Putin wanted us to.”

The whole situation conjures images of Sha’Carri Richardson, a Texas native like Griner, who was a medal favorite for the 100-meter dash before she tested positive for cannabis. She was banned from competing in the 2020 Tokyo Olympics, sparking outrage.

Outrage has similarly followed Griner, who lives in South Mountain Village and has played in the Valley all of her professional career.

The Phoenix Mercury selected the 6-foot-9 center with the No. 1 overall pick in 2013. She was red-hot entering the draft after leading the Baylor University Lady Bears in 2012 to the first 40-0 campaign in women’s college hoops, capped by an NCAA women's title.

Griner later won two Olympic gold medals on the U.S. team, and a WNBA championship with Phoenix in 2014, her second season in the league. She is a seven-time WNBA All-Star.

“We love and support Brittney and at this time our main concern is her safety, physical and mental health, and her safe return home,” the Mercury said in a statement.

Griner’s agent, Lindsay Kagawa Colas, declined to comment because of the ongoing litigation.

Over time, Griner’s relationship with the WNBA soured.

She reported feeling undervalued and under appreciated by the WNBA in 2019 after she was suspended for three games for tangling with Kristine Anigwe of the Dallas Wings.

Four years earlier, the league slapped her with what was then the longest suspension in its two-decade history following Griner’s domestic violence arrest in Goodyear. She was booked into Maricopa County Jail in downtown Phoenix and ended up pleading guilty after her now-ex-wife, WNBA standout Glory Johnson, lodged assault charges against her. Griner and Johnson each received seven-game suspensions after the incident.

Johnson played three seasons with the Tulsa Shock before the team relocated to Dallas and rebranded as the Wings. After four seasons with Dallas, she played for the Atlanta Dream in 2020.

Despite tensions, the WNBA is anxious to see one of its star players return home to Phoenix.

“Brittney Griner has the WNBA's full support and our main priority is her swift and safe return to the United States,” the league said in a statement.

There is hope for the future of destigmatizing weed in the WNBA.

Griner has now become another face of cannabis in women’s sports, too.