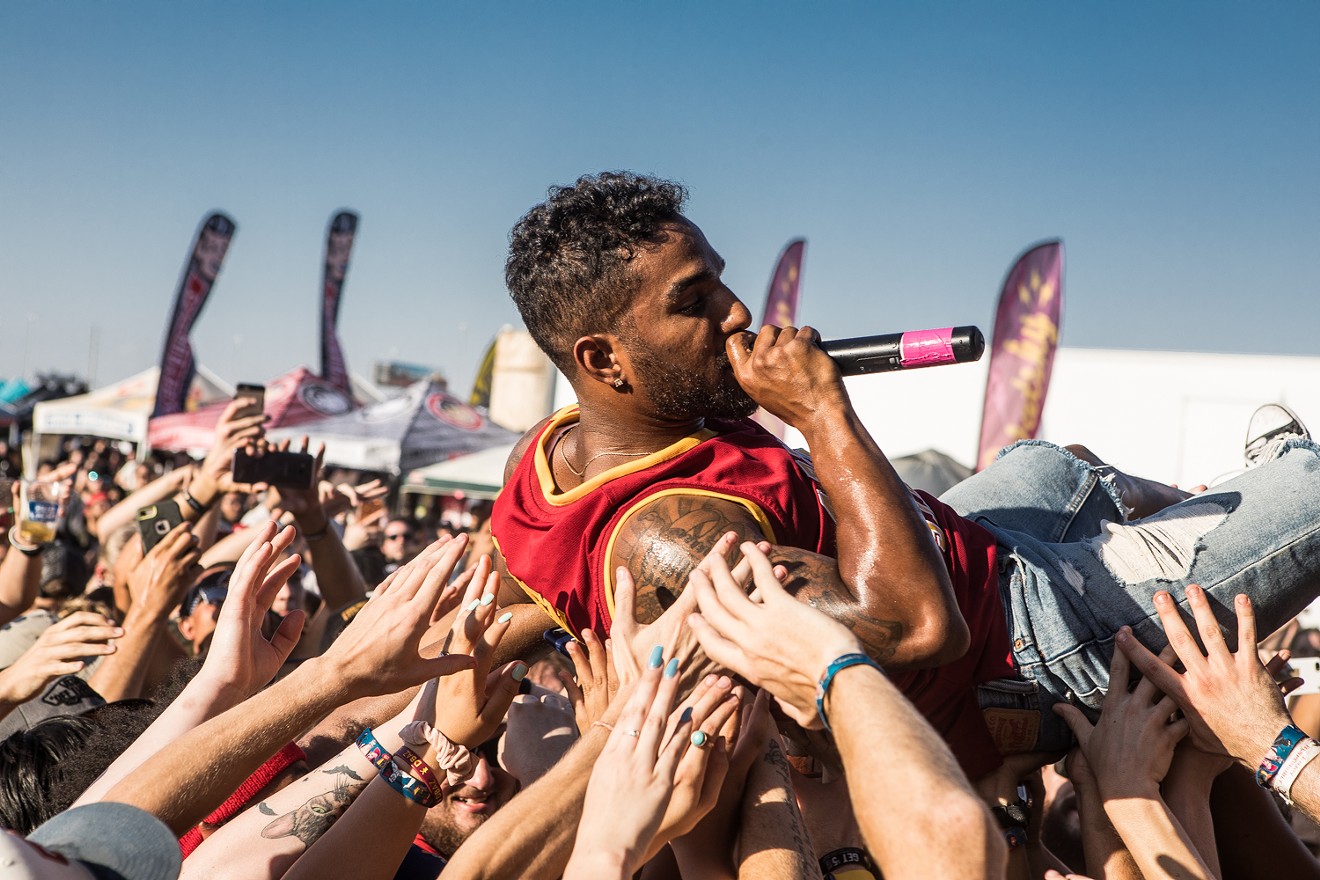 
Arizona hip-hop is like the desert. To the untrained eye, rap culture in Arizona seems like a vast, barren landscape. However, if you take the time to get a closer look, you'll start to notice the level of variation in Arizona's hip-hop scene.

Most people are familiar with Mega Ran, our resident nerdcore king, but even he has noted that Phoenix's local hip-hop scene is better and more diverse than ever. It's a scene that's evolved over time to make room to host artists from dozens of subgenres.

These acts are high-caliber creatives from Phoenix who are dominating their lanes both on a local level and from a national platform.

Once you start looking, it's not difficult to find an enticing hip-hop artist. We've curated a list that represents the acts that are not only at the top of their but a leader of their respective lane. These rappers prove that when it comes to hip-hop, Phoenix brings some serious heat.

Ann Bennett, who is Felix Gamarano’s grandmother, wrote and sang the theme song for the 1960s cartoon version of Felix the Cat. It's where the 26-year-old Valley native got his moniker.

The co-owner of HSK Studios in Phoenix has an impressive standalone resume. In 2015, he toured Europe with his mentor and frequent collaborator Mega Ran and released the collaborative album Emerald Knights 1. The 2018 follow-up Emerald Knights 2 appeared on the Billboard charts. His latest solo album, Felix , landed him in some hot water.

He also works toward helping the careers of other local acts. He’s an integral part of Respect the Underground, the label and collective that organizes the annual Arizona Hip-Hop Festival. It's his belief in himself and his city that keeps him moving forward.

“Hip-hop in Phoenix is better than ever,” he said. “The only way we can get better is for more artists to keep doing what they’re doing.” 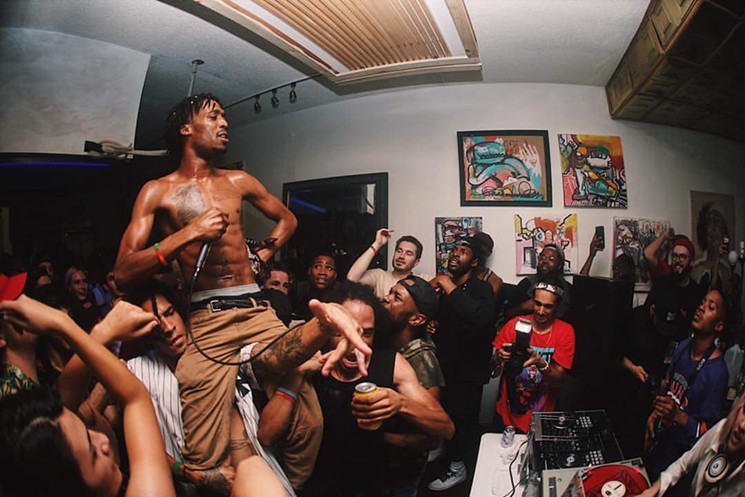 DéLa Preme is the most electrifying hip-hop performer in Phoenix.
Hector Reyes

DéLa has an energy level that's as infectious in the studio as on the stage. Born and raised in Glendale, the former battle rapper, born Marc Stewart, climbed the ranks of the underground circuits with his ability to hit his opponent with quick-witted lyrical jabs. Ironically, it was an unexpected loss that inspired him to take music seriously.

"I was on a crazy winning streak," he said of the battle. "I underestimated him. I didn't prepare, and I got killed for that."

There's still a fighting spirit in his music. Despite his wild boy persona, the grind behind Preme's career is calculated and intentional. His Glendalien streetwear brand is a dope homage to his hometown. Skrrrtday, his latest album, is a fast-paced, almost aggressive ode to his craft, rife with thumping basslines and racing hi-hats. His career is proof that content is only half the ride when it comes to hip-hop. Delivery can be the knockout punch. 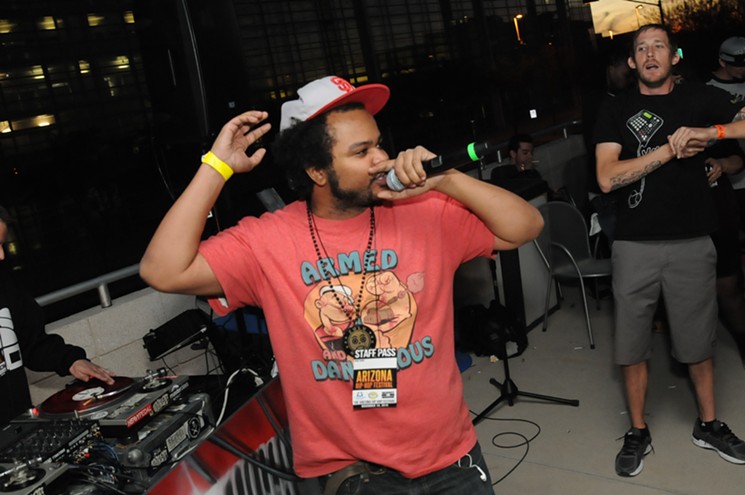 RoQ'y TyRaiD isn’t an Arizona native, but he gives kudos to the city that gave his career wings.

The 33-year-old's recognizable cadence is a callback to the heart of early '90s rap. When he arrived on the scene in his early twenties, TyRaiD, who goes by Jacob Raiford offstage, fought to be heard. His ability to spit lyrical circles around experienced emcees garnered the attention of some hip-hop big shots.

He impressed during a short feature the Wake Up Show Unplugged, a live improvisational music showcase hosted by VJ Sway on Shade 45, Eminem's hip-hop satellite radio station. He also teamed up with DJ Green Lantern for his latest release, Outbreak, and shared the stage with and the Free Nationals and KRS One.

Many of his upcoming projects are under wraps for the time being, but fans of the emcee know to watch carefully for his next move.

BrownBoi Maj's isn't a rapper, but a singer and songwriter who combines vocal effects and sleepy melodies to create a sound that warrants inclusion on this list.

Born Alexis Via, the Phoenix native embraces the familiarity of sadness in the way that is reminiscent of artists like The Weeknd. He started writing songs at 19. "Broke Boi," his first single, was a surprise hit, garnering over 20,000 streams on his SoundCloud within days of its release.

Now 23 years old, Via sees this momentum as an opportunity, collaborating with Kid Ink and Wiz Khalifa. The success of his last album, I Hate You To The Moon and Back, inspired him to relocate to Los Angeles last year, but he always has a love in his heart for home. 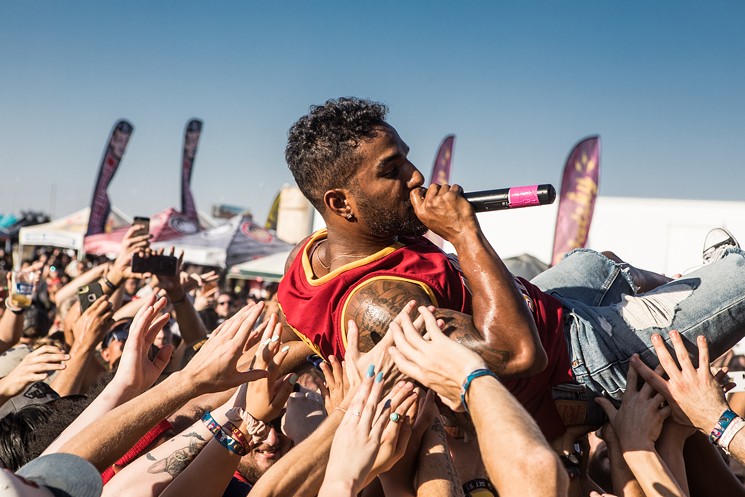 Futuristic released the music video for "Gut Puncher," which features Andy Mineo, last month. The Phoenix transplant, born Zachary Lewis, speaks to the changes he’s experienced personally as his fame has grown. He's cleaned up his flow, too. He's now bringing more vocals to his fusion of hip-hop, pop, and trap rap.

Futuristic has opened for heavyweights like Mac Miller, MGK, Hopsin, and Dizzy. He credits Arizona with supporting him during the early stages of his career. Now he’s branching out with a national tour. This time, the rapper is letting his music speak for itself.

Editor's note: In a previous version of this story, we stated that Jacob Raiford's first name is Jason. We regret the error.
KEEP PHOENIX NEW TIMES FREE... Since we started Phoenix New Times, it has been defined as the free, independent voice of Phoenix, and we'd like to keep it that way. With local media under siege, it's more important than ever for us to rally support behind funding our local journalism. You can help by participating in our "I Support" program, allowing us to keep offering readers access to our incisive coverage of local news, food and culture with no paywalls.
Make a one-time donation today for as little as $1.