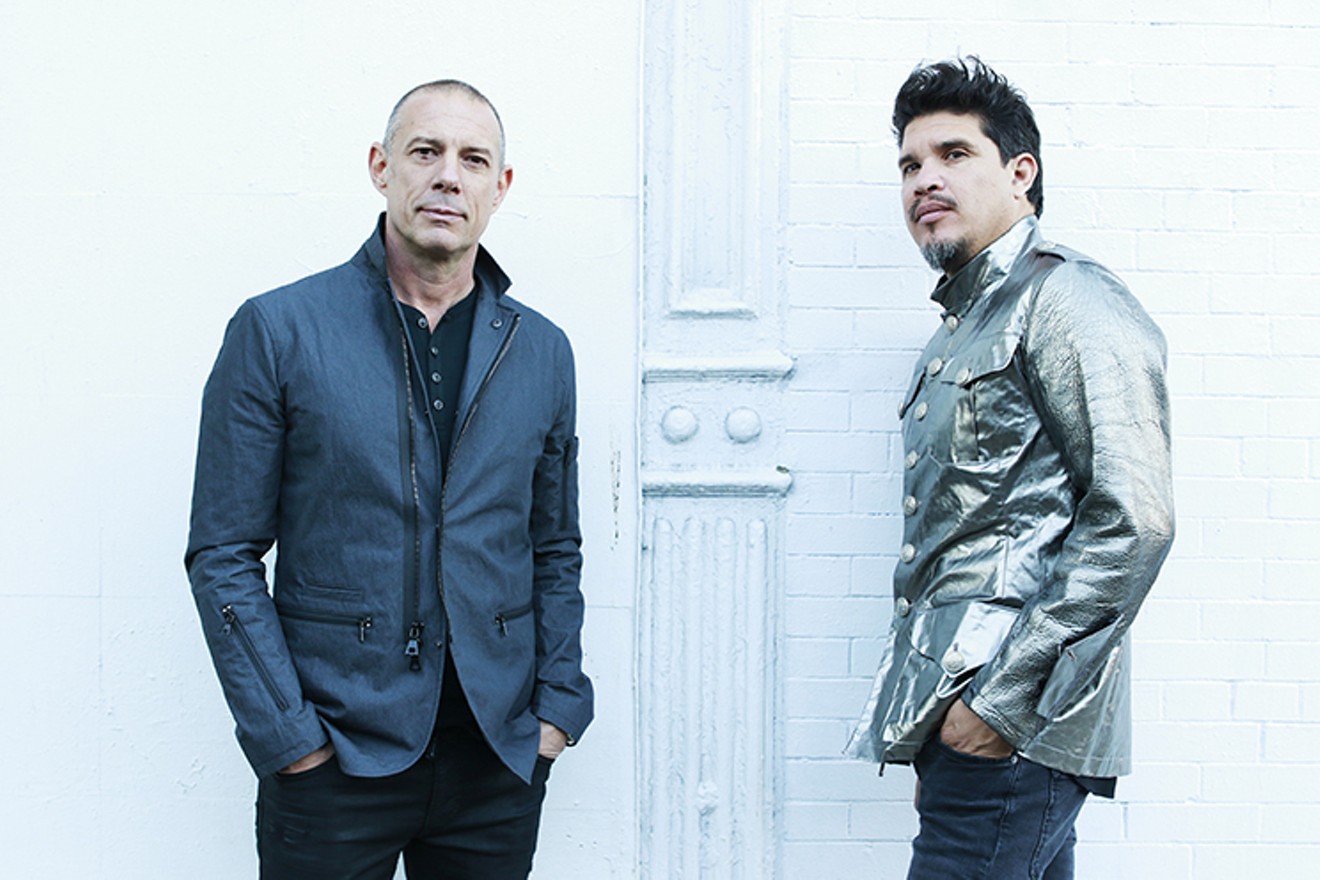 Rob Garza and Eric Hilton of Thievery Corporation. John Shore
One of the misconceptions about being a modern-day music mogul and entrepreneur is that you live the high life, jet-setting at supersonic speed around the world, traveling to strange and exotic places, and frequently partying like it’s 2099.

Rob Garza is one man who experiences these trappings of ownership and enterprise. He works nonstop on his band, solo project, and label, which make it possible for him to enjoy the fruits of labor befitting a multi-talented man.

Those labors include being co-founder of world-renowned electronic music group Thievery Corporation. Along with band member and business partner Eric Hilton, Garza has not only thrived with the group, but persevered the past 23 years and gained an international fan base without a hit record.

After two decades plus of recording remixing and touring worldwide, TC brings its versatile ensemble to the Marquee Theatre Monday, October 22, its first Arizona-area show since headlining the 2015 McDowell Mountain Music Festival.

Garza grew up around the thriving punk and hip-hop cultures of Washington, D.C. They would serve as musical inspiration, a launch pad for his and Hilton’s electronic music amalgamation. The inspired Garza dove head-first into piano lessons, learning classical, jazz, and music theory, to get to the root of music foundations. He began getting local cable-access gigs and putting out his own techno records by the age of 21.

Four years later, Garza and Hilton met and set up a DJ residency at the Eighteenth Street Lounge, located in the historic northeast D.C. district of DuPont Circle. Seeking autonomy from the music industry, they also started their own label, ESL.

This past spring, Thievery Corporation released its 10th studio album, Treasures from the Temple, as a companion to 2017’s The Temple of I and I. Material from both albums was recorded in the coastal Jamaican city of Port Antonio. On both albums, there is an emphasis on reggae, dub, rap, and reverb, sprinkled with a trance-inducing tropical backdrop.

“We recorded Temple of I and I in Port Antonio Jamaica, and when we were putting all the tracks together we realized there were other sounds that we loved equally, and we wanted to create a companion piece,” Garza notes. “There are other textures that are on this record that didn’t necessarily fit on the Temple of I and I.”

Exposure to the volatile political environment in Washington is only one reason why Thievery Corporation has its own socio-political messaging throughout its discography.

“I think it’s a very important part of who we are musically. We try to have songs that are politically conscious about what’s happening in the world, right now,” notes Garza, who cut his musical teeth on punk rock groups like the Clash, Dead Kennedys, Fugazi, Public Enemy, and locally-legendary D.C. group Bad Brains.

”One of the things that make those bands real and very endearing to us is the fact that they weren’t afraid to speak their minds,” adds Garza. “(Joe Strummer of the Clash) was a perfect example for us, in terms of a model for us, of an artist who could really express himself and themselves as a band, really educate people through opening their ears and minds.”

“It can be taxing physically and mentally, but this is what we do, and we’ve been doing it for 23 years now. We have to regulate how much we party, because it’s a marathon and not a sprint.”

Hilton, who is not an enthusiastic live performer, opts to run his side of things from Washington, where the two still run several other clubs and restaurants. Garza also owns artisanal mezcal brand Papadiablo, produced in the countryside of Tulum, Mexico.

Garza, meanwhile, also works on solo ventures. He released his second EP, Dissolve, this year, which scratches an itch to work with more EDM and nu-disco sounds.

“I listen to a lot of different genres,” explains Garza “This EP encapsulates my love for different styles of music.”
With all these projects, one wonders where Garza finds time to create new material.

“Pockets of quietness, you know, all of those places at the same time have windows — plane, trains — so whether you are on a train watching the world go by, or you are 33,000 feet in the air looking down, or in a hotel room in a city that is not your home, in certain ways that can be very inspiring and thought-provoking.”

Whether he is putting a new spin on bossa nova, remixing Nina Simone classics, or creating future bossa nova, Garza remains tireless when it comes to finding the eternal groove, no matter where his other enterprises take him.

Thievery Corporation. 8 p.m. Monday, October 22 at the Marquee Theatre, 730 North Mill Avenue, Tempe; 480-829-0607; marqueetheatreaz.com. Tickets are $45 to $65 via Ticketweb.
KEEP PHOENIX NEW TIMES FREE... Since we started Phoenix New Times, it has been defined as the free, independent voice of Phoenix, and we'd like to keep it that way. With local media under siege, it's more important than ever for us to rally support behind funding our local journalism. You can help by participating in our "I Support" program, allowing us to keep offering readers access to our incisive coverage of local news, food and culture with no paywalls.
Make a one-time donation today for as little as $1.
Mark C. Horn
Contact: Mark C. Horn