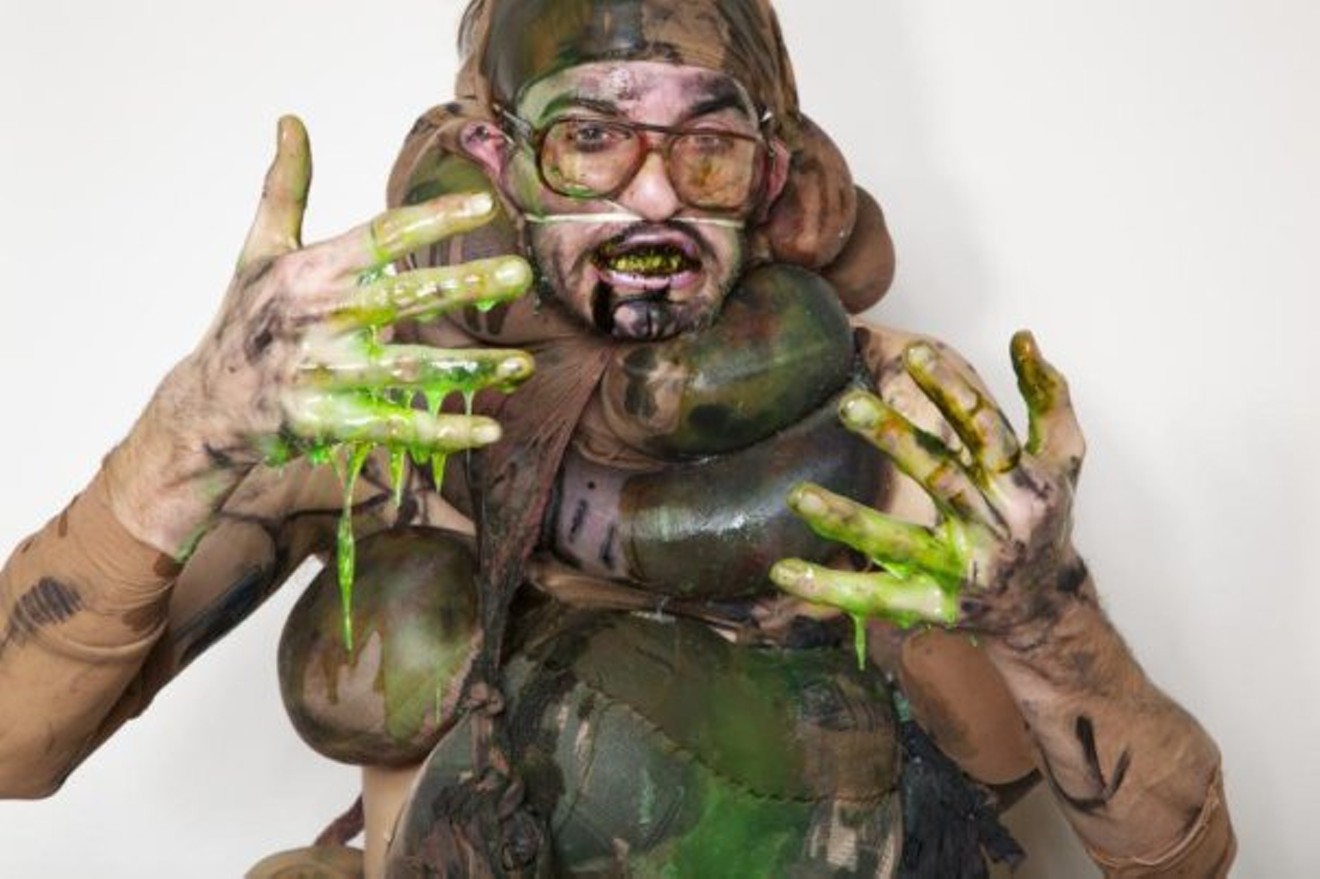 Jason Kyle Knight (a.k.a. The Emotron). Erik Kirk
When most people hear the phrase “one-man band,” the image of a music geek with a drum on his back and cymbals between his knees probably comes to mind. Odds are good they aren't imagining a man in a trucker outfit setting his dick on fire. But that's exactly the kind of one-man band The Emotron is.

The Emotron is the brainchild of former Treephort member Jason Kyle Knight. Inspired by Atom and his Package, Knight put together a solo synth act. Singing karaoke-style over his sequencer, The Emotron's music is full of bouncy electronic hooks and brutally self-effacing lyrics. His stage show is something else entirely: a wild and unpredictable romp that would make G.G. Allin proud. Often performing in his underwear or turning his face into a leering mask by wrapping rubber bands around his head, Knight's shows can include any of the following: nudity, vomiting, strange fluids and powders being tossed on the audience, and setting his own genitals on fire.

We got a chance to talk to the iconoclastic musician (who will be performing in the Valley on August 16) about voodoo, Ween, and scaring the shit out of Indiana.

New Times: Do you have a new album that you're touring right now, or are you still working on new material?
Jason Kyle Knight: Actually, I have not recorded a record since 2010. I have recorded recently a Ween cover and hopefully that will go up on a tribute compilation soon. There's a series of them – number six is coming out sometime in the fall. Around January, I'm hoping to get a new record in and have some new jams out.

Which Ween song is it?
It's off The Mollusk album. It just had its 20th anniversary, and I picked a song from that – “It's Gonna Be Alright.” The song's a beautiful break-up love song – it's really nice.

Your style of performing has evolved a lot over the years. For this tour, are you trying out some new
routines and ideas, or are you calling back to your older work?
Definitely a bit of both. I have been making myself more uncomfortable than I usually am, putting old original versions of songs from 10 to 12 years back into the set. But I'm also integrating some non-recorded songs and new versions of songs I've recorded in the past. I also think there's a lot more spirituality and emotion, raw emotion, in the set. In Fort Wayne, Indiana, people in the audience were legitimately scared of me. Which was awesome for me! I went into it thinking I was going to win all these people over, but it was the opposite – they stayed away from the stage and sat at the bar and talked amongst themselves. “Dude, this guy is fucking insane!”

Because of your reputation as an unpredictable live performer, as someone who sets his own dick on fire and that sort of thing, do you find yourself butting heads with audience expectations? When people go to an Emotron show, do you get the sense that they know what they're in for?
Fort Wayne definitely didn't know what they were in for. There were a couple of people that came up to me after the show and they totally got it. And there were a few people, like the guy running sound, that were like “You are insane! You lit your dick on fire, man!” I played Huntington, West Virginia, the next day and it seemed like everybody knew what was going to go down.

How structured are your sets? Do you plan what you're going to do in advance, or is it more of a spur of the moment deal?
The music is always structured – I just press play on my sequencer and sing along to the music. But all the dance moves, all the movement, the stories and talking in between songs – that's pretty improv'd. Even the lyrics – they're so heavily reverbed and delayed a lot of people can't even tell what I'm singing.

Considering how intense and raw your performances are, what do you think compels you to keep doing these kind of performances? What influences and informs your work as Emotron?
Before Emotron started the tour, about three or four weeks ago, I did a week with a noise band in Pennsylvania. It was an improv comedy show, and we did our noise thing at the end of the show. One of the guys that did improv and ran sound at the event told me afterward – “Dude, have you heard of the Haitian voodoo trance?” And I was like – no. He said, “I believe that you were in a Haitian voodoo trance during your set.” And he explained how in voodoo they put on these masks that represent different entities and archetypes. So these people in the Haitian voodoo trance wear these masks and transfer themselves into these archetypes. They end up representing these entities. It made me think that maybe there's something deeper happening with my performances. Maybe I'm subconsciously becoming some sort of entity other than myself. And maybe that's one of the things that keeps compelling me to perform. It's not the first time I've heard that sort of thing, but it's definitely the first time I heard someone call it a Haitian voodoo trance.

And in terms of influences: Depeche Mode and The Cure have been huge influences for me. Psychedelic drugs, marijuana, DMT, acid, ayahuasca – that's really helped me evolve this portion of Emotron. I've also been performing for the past two or three years in my dad's wedding suit from 1974 when him and my mom got married. I found the suit in the attic. It had been up there for like 40 years, but it fit me like a glove. So I was like, "maybe I should take this on the road." Also, my dad is going through Alzheimer's. I think a lot of me wearing his suit is me, in my own weird way, sending positive vibrations of healing to him while he's at home in Georgia.

The Emotron is schedule to perform on Wednesday, August 16, at The Court House in Phoenix. Check the event page for more information on the venue.